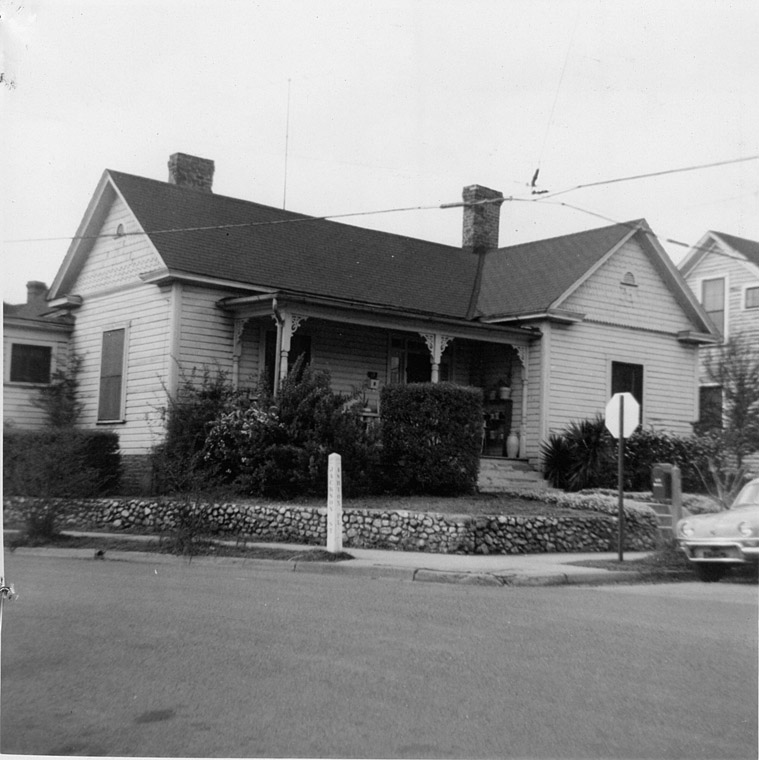 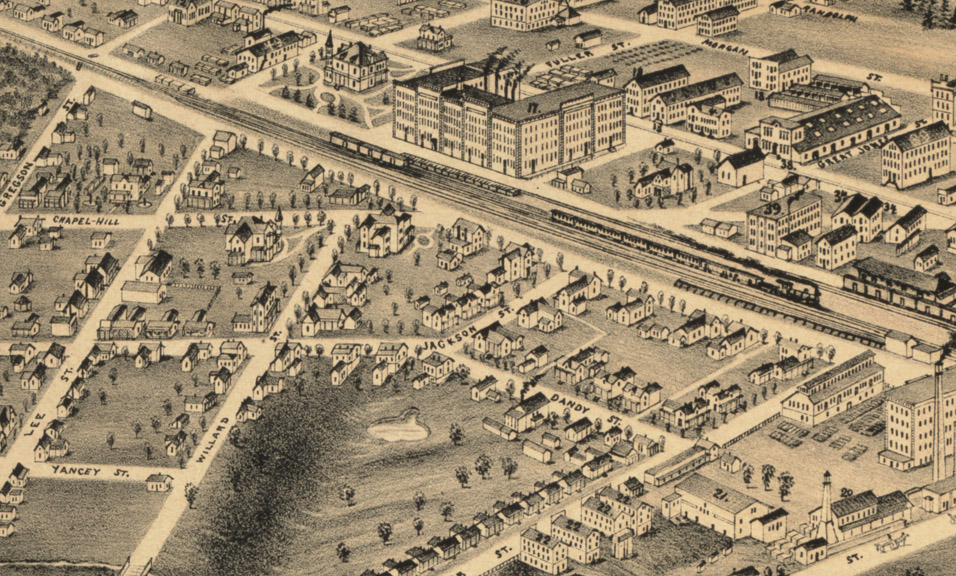 By the early 20th century, this confusing arrangement had been rectified, and Jackson Street extended along the former Dandy Street path. The orphaned one block section of Jackson Street that had extended to West Pettigrew was renamed Ashton Place. 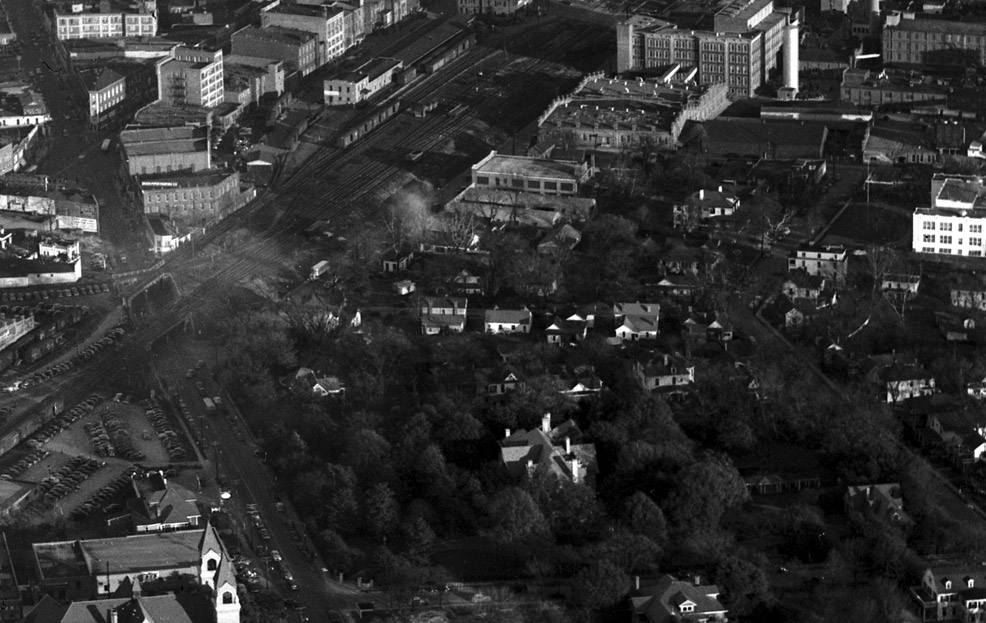 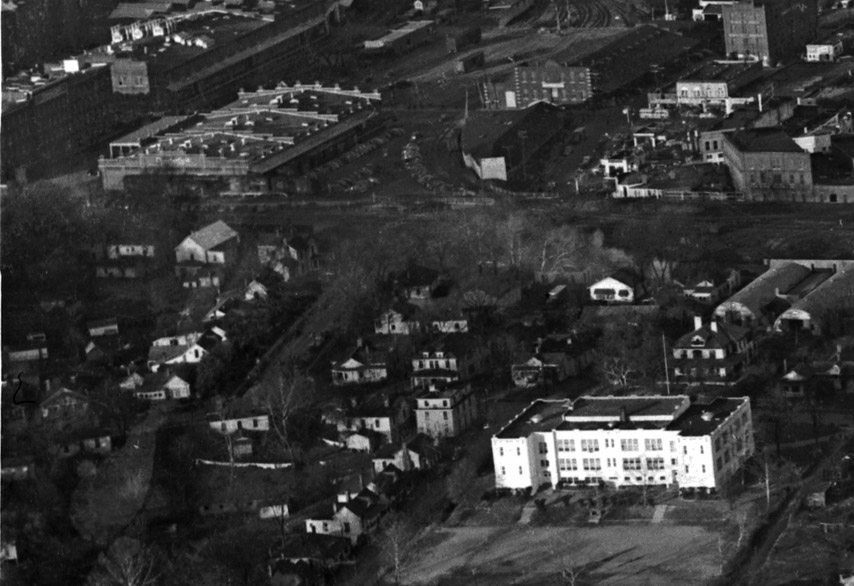 By the 1960s, West Pettigrew and part of Ashton had begun to change to a more commercial flavor, leaving this block somewhat transitional. The western side of the block remained mostly residential until 1967.

These were torn down by urban renewal in 1967. 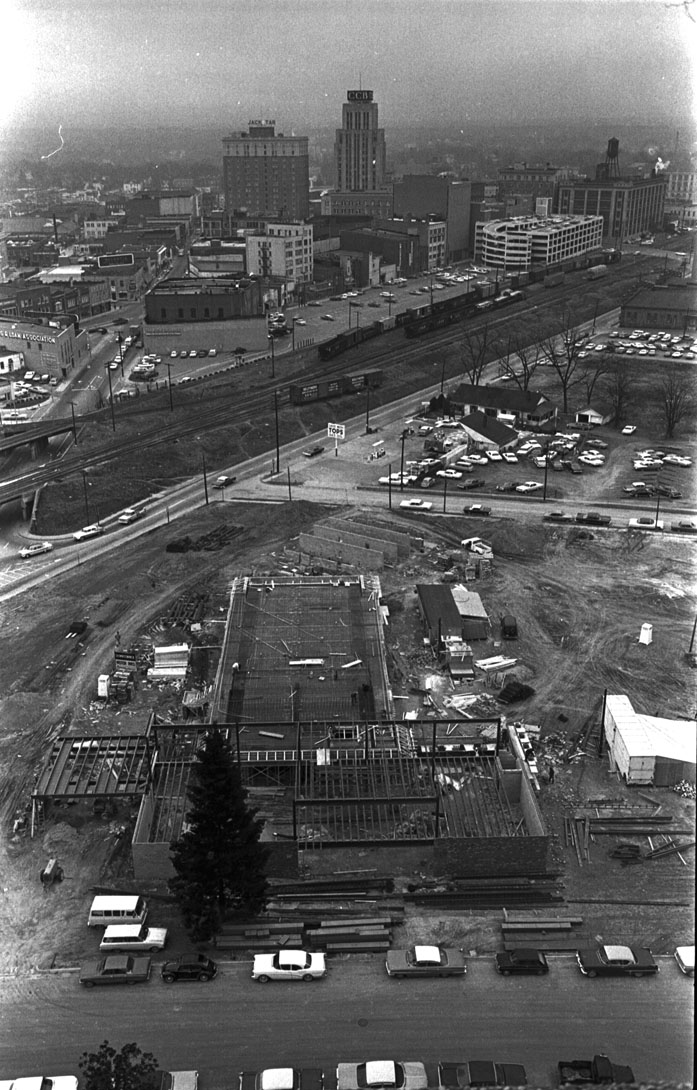 The Downtowner under construction, looking east (and down) from the Mutual building, February 1967, with Ashton Place just to the far side.
(Courtesy Herald-Sun)

Soon after the completion of the Downtowner, Ashton Place was converted to a cul-de-sac (you can almost feel the frisson running up the spine of the 1960s planner when they drew that one on a page) and no longer connected with West Pettigrew. 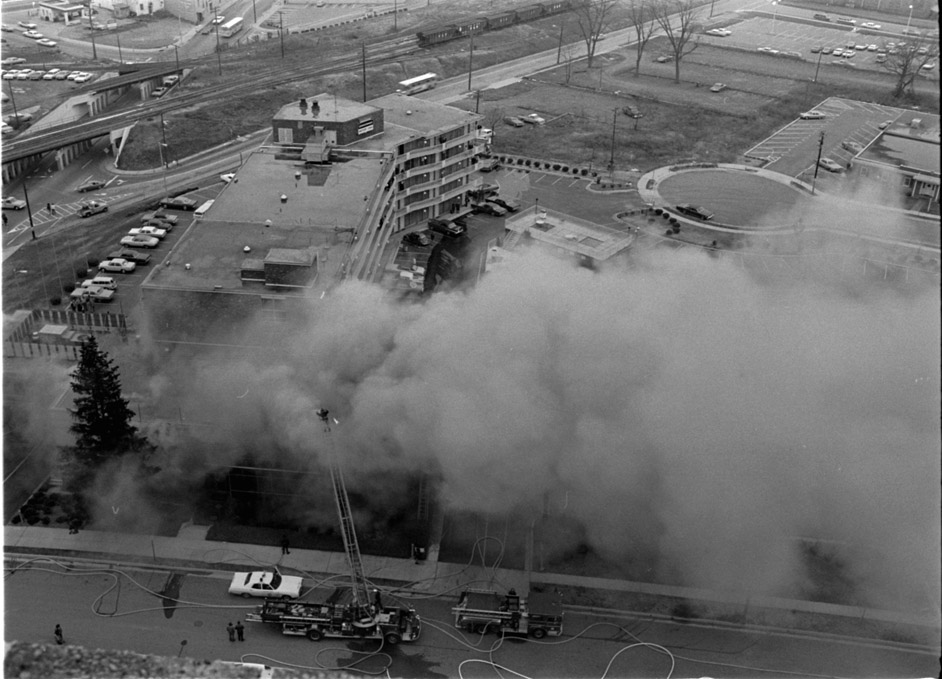 A shot of The Downtowner - on fire, actually - but showing the cul-de-sac-ed Ashton Place in the background, with the evidently undemolished 413 Ashton Place.
(Courtesy Herald-Sun)

Ashton Place has now disappeared, and I don't know if it will return - perhaps as a bus entry and exit? 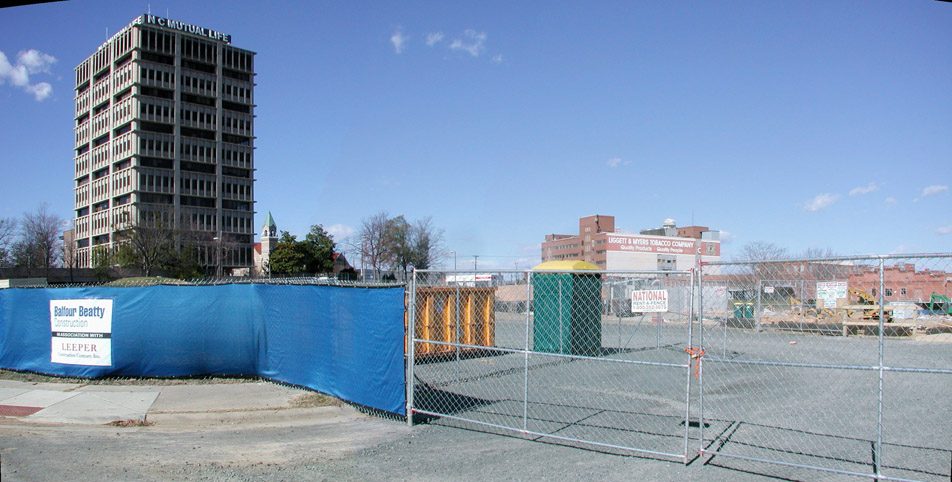 Speaking of which, how are all of these buses going to navigate this area anyway? Are they all going to be dumping out on Pettigrew? Or going up Jackson to Duke Street? It's really an odd place to put a bus station, if you ask me - the road connectvity is not exactly stellar.

You've sent me to the

You've sent me to the dictionary(.com) again: "frisson \free-SOHN\, noun:
A moment of intense excitement; a shudder; an emotional thrill."

Regarding, "where will the buses go?", Robert Burns may have provided the answer:

Drive gently, down Ashton,
forget not your brakes,
Drive gently, I'll thank thee
for not wrecking this space.

My Durham's developing
by your station that gleams
Drive gently, down Ashton
disturb not Durham's dream.

BTW: I've been living lately in Merida MX -- land of monster-buses going at high-speed down and around tight streets with heavy pedestrian traffic and no room for error. It's not pretty, but it can be done.

Love the Burns interpretation - awesome. No doubt the bus can manage to do its thing here. It just seems like an oddly challenging spot to choose - particularly given its initial aspiration to be a train station as well (which lives on in the generalized "Durham Station" name) despite a location across the street from the railroad tracks.

Ashton Place is no longer

Ashton Place is no longer mapped by the City. There are no Ashton Pl. addresses.

Slapstep - yeah, it doesn't look like the city has made an effort to preserve the street, so I kinda figured it was gone for good.

Ashton Pl. still lives in Google Maps! Perhaps if the bus station didn't dig up the old pavement (I can't tell from Gary's pictures), it might live again? Maybe? :-)

If not, too bad for the person/family the street name was to honor.

This is one of the (several) reasons I would never want anything named after me. Better to remain one of the unwashed middle than to have your once-proud name get trashed by next the bigger and better deal.