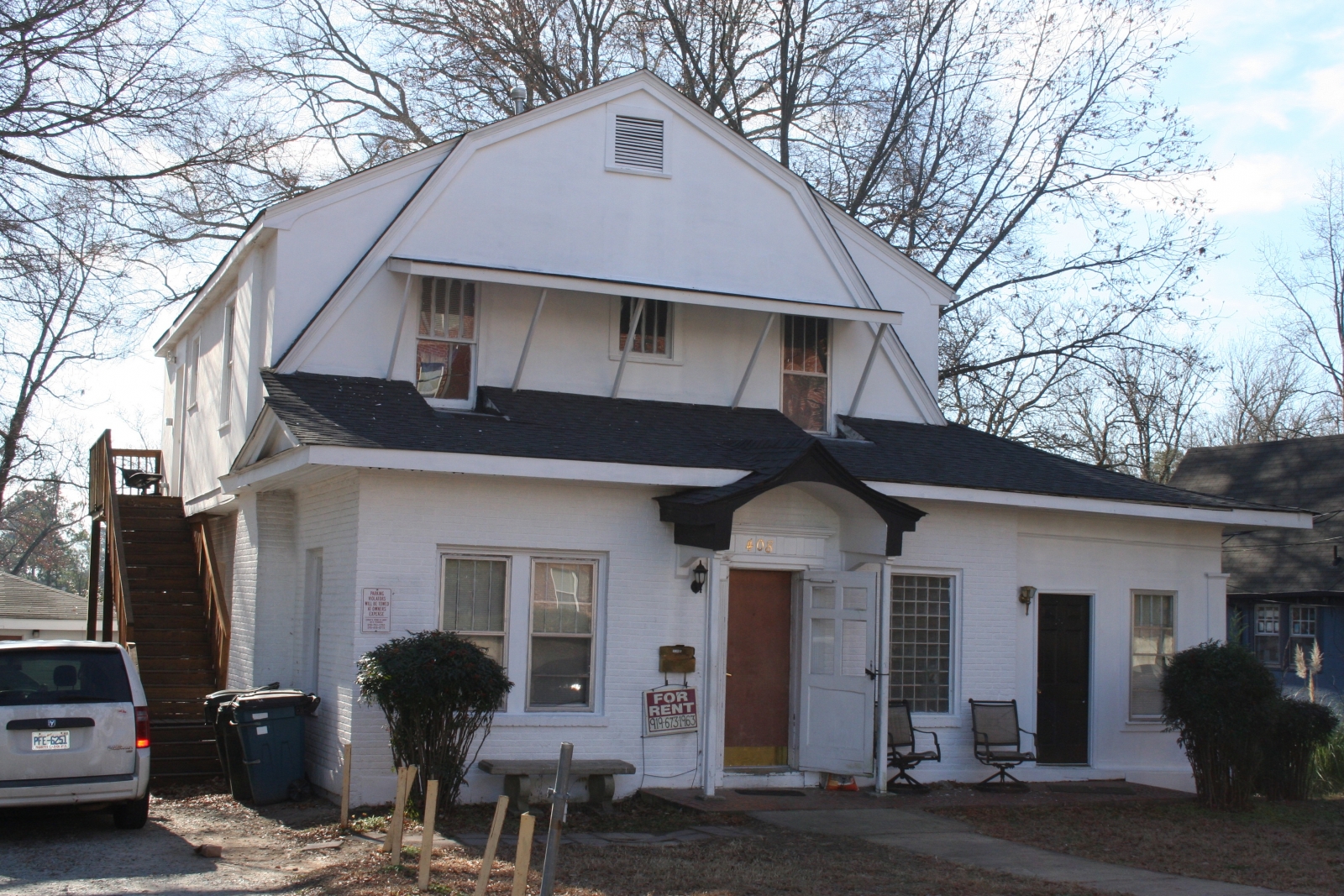 This unusual, two-story house features a brick-veneered, hip-roofed first floor with a gambrel-roofed, frame second floor. The first floor features a painted brick veneer and four-over-one Craftsman-style wood-sash windows. It is four bays wide with paired windows on the left (east) end of the façade and a replacement, hollow-core wood door near the center of the façade with a classical surround with fluted pilasters supporting a plain entablature. The entrance is sheltered by a front-gabled porch supported by square posts. The window to the right (west) of the entrance has been replaced with glass block and the right-most bay is a one-story, enclosed (formerly screened) porch supported by square columns and enclosed with flush vertical sheathing. The enclosed porch has vinyl windows throughout and a door and single window on the façade. The second floor is set back from the façade slightly with a stuccoed exterior. It is three bays wide, and features a gambrel roof with full-depth, shed-roofed dormers on the right and left elevations. Three windows on the façade are sheltered by a wide, shed roof on diagonal braces and there is a square louvered vent in the front gable. An exterior brick chimney on the left elevation is covered with stucco at the second-floor level, but has been truncated above the roofline. An exterior wood stair on the left elevation leads to an entrance at the rear of the dormer on that elevation. County tax records date the house to 1925 and the earliest known occupants are Henry M. Michaux, secretary/manager at Union Insurance & Realty Company, and his wife, Isadora C. Michaux, in 1930.  They were the parents of two sons, Henry Jr. "Mickey" and Eric, attorneys.  Mr. Michaux owned and sold several parcels of land around Durham.  The Michaux family had many high-profiled guests to visit, as well as, stay in their home.  One of the most famous was Dr. Martin Luther King, Jr.

Mickey Michaux is a well known civil rights activist and was the longest serving legislator in the North Carolina House of Representatives.  At North Carolina Central University, the Michaux School of Education Building was named in his honor.  After retiring in 2018, Mr. Michaux was appointed to complete the unfinished term of state senator, Floyd Mckissick, Jr. by Governor Roy Cooper in January 2020.  In March 2020, Mickey resigned from the position.

The land for the Michaux family home was purchased on October 5, 1922 from F.K. Watkins and his wife, Margurita.  They built their home and began residing there in 1930.  On September 11, 1990, Eric Michaux, executor of Henry M. Michaux Sr. estate, sold the home to James E. Walker and his wife, Carolyn T. Walker. who lived in the house for many years.  On October 4, 2010, HSBC Bank USA sold the house to Dayal Satinder.  The house was signficantly modified in 2016.   The owner has partitioned the house to make it a rooming house with several tenants.