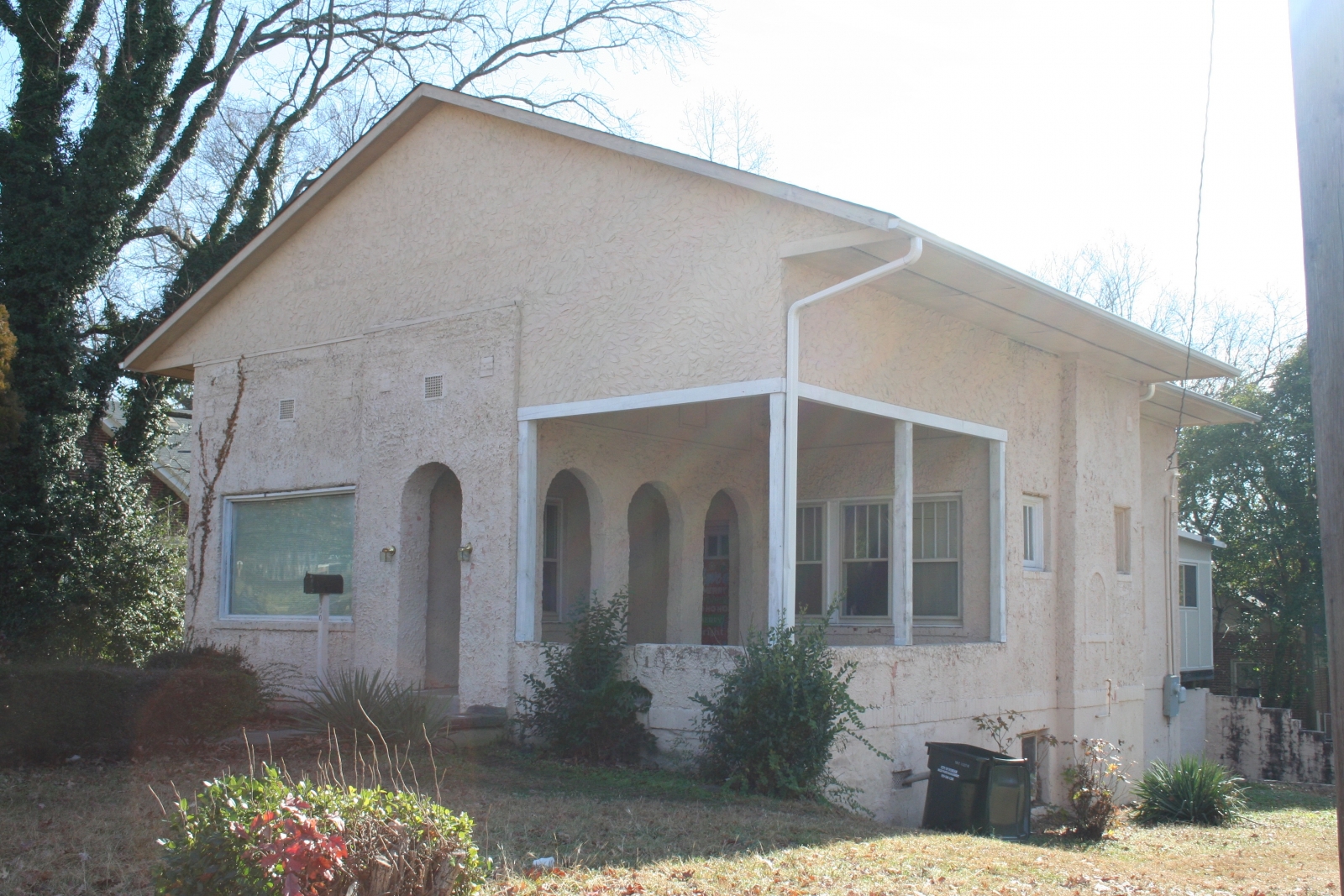 Constructed as a Spanish Revival-style house with gabled roof behind a stuccoed parapet and uncovered terrace at the front right (northwest), the house has been significantly altered (after 1981) with the construction of a front-gabled roof and the covering of the terrace. The house is three bays wide and triple pile with a stuccoed exterior and four-over-one Craftsman-style wood-sash windows. A group of three windows on the left (east) end of the façade were replaced with a single fixed picture window after 1981. An arched entrance bay, centered on the façade, leads to a deeply recessed entrance. The inset entrance bay was originally a narrow porch and features a single window on its left side and three arches on its right, originally leading to an open terrace, now an inset porch with stucco covered knee wall. A group of three windows is located to the right (west) of the entrance. The right elevation has an exterior stuccoed chimney that has been truncated above the roofline and is flanked by four-light Craftsman-style windows. The left elevation has a basement-level entrance sheltered by a gabled roof on knee brackets. A near-full-width gabled rear wing is flush with the left elevation and features paired windows on the left elevation and a triple window on the inset right elevation. At the rear (south) of the house is a shallow gabled wing wrapped with a shed-roofed frame wing, enclosed as a sunroom with an open carport at the basement level below. The earliest known occupants are A. Moore Shearin, South Fidelity & Surety Company, and his wife, Margaret S. Shearin, owner of Chamberlin Studios in 1930.  They were the parents of two sons.  Mrs. Shearin was the daughter of C.C. Spaulding who lived at 1006 Fayetteville Street.  W.G Pearson and his wife, Minnie, sold two lots to the Shearins on September 1, 1927, where they built their home and resided there.

For many years, Mrs. Shearin taught piano lessons to many of the children of College Heights and from other parts of the city.  She was well known, largely due to her family connection, but also for her disciplinary requirements for her music students to achieve excellence.  Chamberlin Studios was located on the back of her house and that was how students would enter and leave after their lesson.  She had a very successful business and was in high demand for her talent  There was an annual recital performed to showcase her students.

Musical talent is in her family quite strongly.  Her grandson, Chip Shearin, is a world renowned bassist.

On April 7, 1988, Mrs. Shearin sold her house to Ralph Colin Judd after her retirement. Her husband had died years before.  Mr. Judd lived there for a couple of year before C&S Family Credit of North Carolina to Ronald L. Allen and his wife, Desiree Cohen-Allen on April 26, 1990 and made it a rental investment.  On July 3, 2019, the Allens sold the house to Smivera Building LLC and it remains rental property.