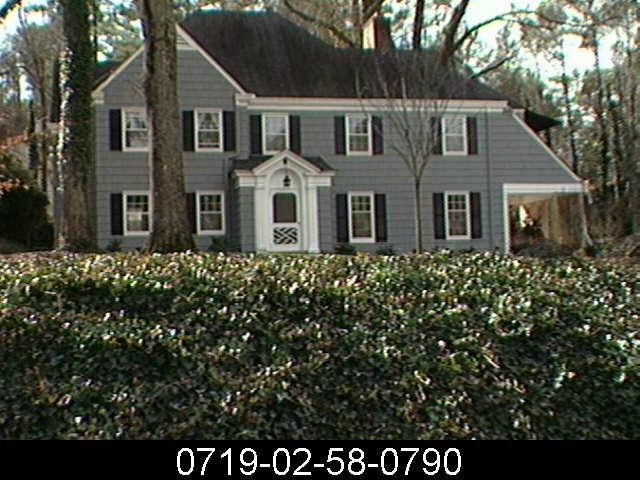 From the 2002 Preservation home tour booklet:

It is believed by Hope Valley residents that this is one of the original Mebane and Sharpe "spec houses" and that it was designed by George Watts Carr, architect for the original seven spec homes built between 1927 and 1929. According to city records, however, this house was built in 1930, and William Pearlzweig and his wife were not associated with this property until March 1931. They probably purchased the parcel from a Mr. Lickle, who, records show, bought it approximately two-and-a- half years before the Pearlzweigs. If Lickle was the owner responsible for the construction of this house, he did not live in it very long. If it was not built until 1930, then the house is not one of the original spec homes, but one of the first generation houses built in Hope Valley after it began to emerge as a community in its own right and distinguishable from Mebane and Sharpe. The architecture of this house supports this view because it has some characteristics which distinguish it from the original spec houses. For instance, the house is clad in wood, not roughcast, there are no stone facings or knobbed stones, but trim and architrave, and the overall massing of the forms that make up this building have a different emphasis.

This house was probably designed by George Watts Carr. Like many of his "spec" designs, this house utilizes English revival domestic architecture like that of Edwin Lutyens and C.F. A. Voysey who sought an authentic English architecture which reflected a late medieval or Tudor spirit. C.F. A. Voysey's work was particularly influ- ential in England between 1895-1910, and subsequently on the Continent. It was Voysey who was largely responsible for breaking the hold that classical architectural forms held over English patrons, and who brought us the English lodge, or cottage, style. While Voysey's buildings were typically roughcast with stone facings and iron casement windows, they often included a variation on a hipped roof with a cross gable or cross gables at each end over a rectangular form. There was frequently a shed roof at one end as there is here, which slopes from two or three levels down to one. His designs were often punctuated with porches, verandas, bays and dormers, all of which we can see here. Although Voysey's buildings were usually on a scale much larger than the Pearlzweig House, the resemblance is more than passing.

Voysey's buildings were intended to be suburban homes-comfortable, detached, medium-sized. The detached garage with steeply pitched roof was part of the original scheme. Work or storage space built into the peak was accessible from stairs at the back of the building. Since the house was originally built, little change has been made to the structure. Indeed, according to its current owner, the house not only has most of its original shingles, but also retains its grey with white trim color scheme. An entirely new kitchen was installed in 1980. The space in the peak over the garage was converted into a grandmother's apartment and the garage below into a family room-now known as the "white room." A small two-story addition was built to link these spaces to the main house. Both the upstairs and downstairs now have direct internal access to the converted space via the original stairway of the house. Thus, apart from interior decor (which is very different from its original) and extensive restoration work to the original lath and plaster walls (which the owner prudently insisted on keeping), the original home is structurally and visually intact and looks much as it did when it was originally built.

Since its beginning, this house has had six owners. Stephen Barringer, its 2002 owner remembers coming here to play as a young boy. His childhood home, the Teer House, across the way on Chelsea Circle is also on this tour. Much of the work changing the appearance of this property has taken place to its landscape. By building a beautiful retaining wall of North Carolina stone close to the road and backfilling with earth, Mr. Barringer has expanded the grounds surrounding the house by capturing land that once sloped down to the road. He also lined the road below with a wide verdure. Where there used to be an awkward rec- tangular parking area carved out of the berm at the street-level, the owner has created the elegant small circular drive that ingeniously makes use of the otherwise unusable land at the street corner.At the same time, gracious brick steps lead up the incline toward the entry of the house. On the west side of the house a new enlarged patio made of blue slate has been laid where once there had been concrete and an intimate little garden was created behind the house which Mr. Barringer's daughters call the "secret garden."