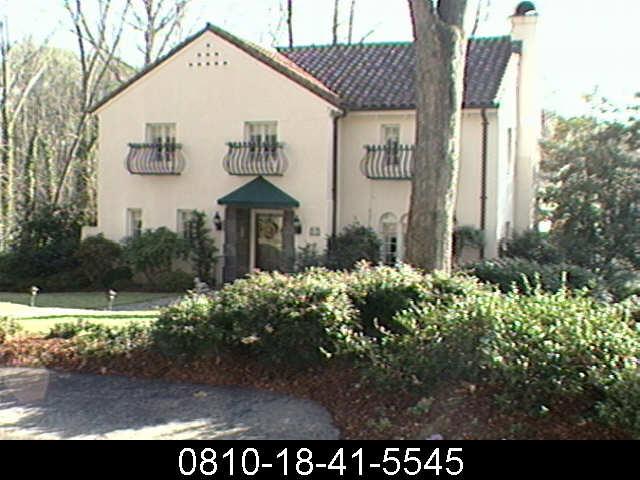 This charming little house is like no other in Hope Valley and, architecturally speaking, it is one of the most significant houses in Durham. What makes it so special, of course, is its high-style Spanish Eclectic design.

For a residential design usually associated more closely with the southwest and Florida then the upper south, Durham has a small, respectable collection of Spanish eclectic houses. Of these, however, few are as interesting as the D. T. Smith House. Before World War I, American houses displaying Spanish influences were mostly in the Mission style. These houses are distinguished by their signature curvilinear, Alamo-like, gable parapets. In Durham, the foremost example of the Mission style is Hill House, the home of John Sprunt Hill on South Duke Street. After the war, residential architects began to experiment with a range of home designs drawing much more heavily on actual Spanish and Mediterranean precedents. The movement towards greater historical accuracy in Spanish-influenced architecture was signifi- cantly stimulated by the 1915 Panama-California Exposition in San Diego.The event received considerable attention nationally and, as a result, things Spanish became the fashion. Throughout the 1920s and '30s, architects responded to popular demand with house designs ranging from modest bungalows to the Palm Beach mansions designed by Adison Mizner.

The D. T. Smith House was designed by Durham architect, George Watts Carr. Whether the design was one chosen by Hope Valley's developers, Mebane and Sharpe, or by Dr. and Mrs. Smith is unclear from the record. The Smiths bought the property in 1932, but the house may have been built earlier. All of the principal design elements of the Spanish Eclectic are present in the house. As you approach the front entry, notice the tile roof and stuccoed walls. The recessed front door is surrounded by slate. To your left is a curved wing wall. On the wing to your right, note the triple-arched focal window giving light to the large living room inside. The case- ment windows are set in thick, solid masonry walls. The iron grills at the windows are not original, but are in keeping with the Spanish Eclectic style.

The interior plan of the house is very similar to the Tudor Revival style Branscomb House, also designed by George Watts Carr. Immediately to your left as you enter is a small study. On the right is a sunken living room running the original width of the house. Spanish decorative features on the interior include the molded beams on the ceiling and the tile floors. Unfortunately, the original mantelpiece in the living room appears to have been removed by a previous owner. At the rear of the hall is the dining room. The tray ceiling here is not original, but the plaster cove where the wall and ceiling join may be. The large bay window supplies soft northern light all day long. Semi-domed wall niches provide formal display spaces. A butler's pantry once joined the dining room to the small original kitchen. The pantry was sacrificed to enlarge the kitchen sometime ago, but its cabinetry has survived.

Upstairs, you will find a large master bedroom with its own small fireplace and three smaller bedrooms. Running along the back of the house is what was once an open Spanish-style balcony with fancy turned posts and balusters. Today it is an enclosed sitting area with what must be the finest view in Hope Valley.

Below the house is a full basement containing a large comfortable den, a bed- room and a full bath as well. These spaces appear to be modern additions. The elaborate faux finishes on the woodwork were applied in the 1980s.

Successive owners have added an enclosed patio and fountain to the terraced back lawn. The current owners, Douglas and Barbara DeBank, added the pergola to support climbing 'Lady Banks' roses, a floral pun on their name and an architectural modification wholly appropriate to the style of the house.

Because it so adds to the architectural richness of the neighborhood, the Smith House has always been a Hope Valley favorite.