This house was built for the Dr. William and May Singletary family in 1957 and they remained here until 1996. This and a number of other houses on Beverly Drive represent a departure from the classical revival style houses that dominate the Durham suburbs. 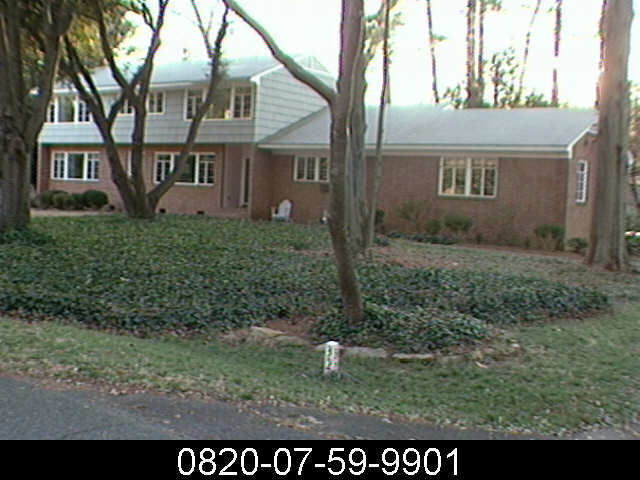 This house was built for the Dr. William and May Singletary family in 1957 and they remained here until 1996. This and a number of other houses on Beverly Drive represent a departure from the classical revival style houses that dominate the Durham suburbs. At the same time it signifies the introduction of mainstream, contemporary architecture of the 1960s. A shift that the architecture school at North Carolina State University had been wanting for some time. The Singletaty's purchased the plans for this house from a Jamaica, New York company, 'Architectural Plan Service, Inc.' Samuel Paul was the architect and Birmingham Construction was the contractor. It was built according to the plans with very few, and only minor, changes. No alterations were made to its footprint, massing or profile.

The fact that it was built from 'off-the peg' plans would intimate that the 'look' of this house had become mainstream. Indeed, to the contemporary eye, a glance at it would suggest little of architectural importance. However, if one places it in the context of housing developments dominated by George Watts Carr and Archie Royal Davis, as is much of Forest Hills, then its presence becomes a more significant architectural statement. As one can see from a look up and down Beverly Drive, there was a new consensus view about what was appropriate architecture for the times. This represents a major shift for Durham.

The house itself is an interesting mixture of details. Certain Prairie School features in modified form have made their way into its design: it has a long, relatively low-slung silhouette; the pitch of its roof is slight; it is made of an extra long {although not thinner} brick veneer than was the norm locally. Also the ground floor plan is open, although the interior does not have the central fireplace core typical of Prairie homes, nor does it have the characteristic window types. In addition, there is a flat roof over the living and dining room {this is hidden from the front view of the house, virtually no ornamental detail, moldings, where they exist, are small and simple, and windows are metal. Other modern amenities have been added as well: a family room has been introduced; and the laundty 'room' has been brought up from the basement and condensed into a work station adjacent to the kitchen for efficiency and ease of use. Accordion doors have been installed in order to create a choice of uses for the living/dining room and the two adjoining bedrooms upstairs. The garage, which appears in the plans, was converted into a family room before it ever saw an automobile. Likewise, the screened porch, which appears on the plans as a covered patio, was adapted to the South.

All of these details show an attention to function, comfort and modernity, but then certain details incongruously remain. The fireplace in the living room belongs to a Watts Carr or Davis house; the rear of the house is much more modern and inter- esting than the front, and the entire design is much more modern on the interior than the exterior would ever betray. This suggests hesitancy on the part of the architect to present a design too modern for the mass market. Hence, the 'super- modern' façade is snuck in through the rear!

The Singletary House is a comfortable and elegant house and the kitchen must have been a model of its time. Lighter than many 1950s and 1960s kitchens, the two original General Motors ovens are miraculously still there. There is a generous stairway and copious closet space (for example, the front hall is lined with closets; there is one in each bedroom, two in the laundry, two in the master bedroom and three more in hallways), all suggesting a modern mindset and a post-war accumulation of 'stuff'.

The current owners have left the original master bath, the original Formica in the kitchen, and the cooking appliances. Although interior colors have changed, its scheme is appropriate. The kitchen offers a rare opportunity to see a state of the art post- WW Il kitchen intact. In the past two years the current owners have regraded and re-configured the back yard, and built the exterior brick screen that connects the house and family terrace to the new carport.