2511
West Club Boulevard
Durham
NC
Year built
1922
Architectural style
Bungalow
Construction type
Frame / Masonry
Local historic district
Watts-Hillandale
National Register
Watts-Hillandale
Neighborhood
Watts-Hillandale
Use
Residence
Building Type
Residential
Can you help?
You don't need to know everything, but do you know the architect?
Log in or register and you can edit this. 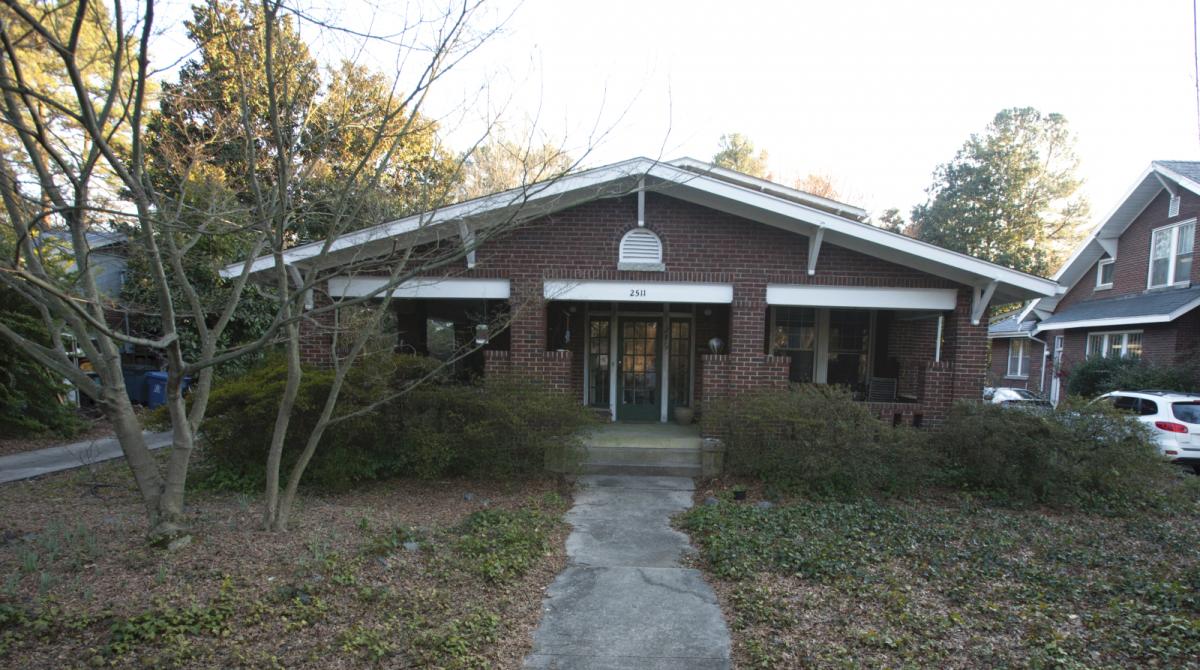 Fall 2022 update: This home is having its 100th Birthday and you're invited!  Find out more about the free (but donations welcome) Garden Party put on by these generous homeowners and Preservation Durham here.

The description in italics below was written for the same 2016 tour brochure that included the above image.  Among a lineup that featured variations on the style across Durham, this was highlighted as "The Artistic Bugalow."

This remarkable house was built in 1922 for W. A. Lyon and his wife, Lessie Rogers Lyon.  It is what was called an “artistic bungalow” in the real estate parlance of the 1920s.  Such houses were distinguished by special architectural features like fancy brickwork and unusual massing or roof designs.  At a time when many homes were built from stock plans, artistic bungalows were often specially designed by architects for clients.  The houses were intended to appeal to professional and upper middle class homebuyers.  They were larger, had finer interior finishes and details, and were often brick-clad.  The Lyon house is a fine example of the type and it is more remarkable because it has been so little altered over the years.

Although the Lyons’ house has the low-pitched roof and decorative knee brackets supporting the roof overhangs typical of craftsman style gable-front bungalows, it is anything but typical.  Sited above the street, the house rises rhythmically. A low, deep, wraparound porch spans the entire front. Its broad, shallow-pitched roof is supported by four massive brick piers.  In the gable peak is an arched attic vent.  The overhang is punctuated by five evenly spaced knee brackets.  Beyond the porch the main level of the house rises again, its roof has the same shallow pitch as that of the porch.  Five more knee brackets hold up its identical overhang.  Beyond that rises again a second full second story at the rear of the house –so unusual in a bungalow.  Its roof has the same pitch and brackets as the levels below it.  In the gable is the same arched attic vent found in the porch gable below.

The house is clad with deep red wire-striated brick laid in a running bond with deep raked mortar joints.  Note the massive granite window sills.  They have been carefully cut to shed water and are finished with coarse hand axing.  Surrounding the porch is a wide and substantial brick balustrade.  The brick and stone work on this house were expensive details in their day.  The very tall windows are not stock items but made to bring abundant light into the high-ceilinged rooms inside.  They are set in pairs and singles and their lights are organized in a nine-over-one pattern.  The windows are original.

The porch contains an entry vestibule.  Its glass door is flanked by sidelights.  Beyond is a similar door leading directly into a large living room that runs the width of the house – a typical bungalow feature, but executed here on a grand scale.  The high ceiling is decorated with crossed box beams.  Opposite the front door is wall space sized to accommodate a piano.  To the left is the large original brick fireplace.  The room extends to the right where pairs of windows bring in western light.  Note the unusual low radiators under the windows. When the house was new, a large steam boiler provided winter comfort to every room.  Look for the amazing variety of radiators as you tour the house.  They are original.  The interior doors and their hardware are all original too.

Beyond the living room is the dining room.  It too has crossed box beams supporting the ceiling.  Beyond it is what was once the breakfast nook.  The door opening joining the nook and the kitchen was expanded into an arch some time ago, but the current owners still use the nook space for informal dining.  For so large a house, the kitchen space may seem comparatively small.  This is not unusual for upper class homes from the early part of the 20th century.  For the Lyon family this was service space occupied primarily by their cook and maid.  Note that the swinging door between the dining room and the nook is still in place riding on its spring-loaded hinges.  The kitchen is served by a pantry and porch.

On the east side of the house a hallway provides access to two bedrooms, the downstairs bathroom, a cedar closet, and the stairs.  The telephone niche is from the Arabian nights.  It is not designed for the ordinary candlestick phone of the day, but a more elaborate model.  The phone’s wires and works were concealed behind the vented panel below and the receiver and mouthpiece were installed above.  Unlike most bungalow houses, the bedrooms are large.  The bathroom is almost entirely original.  The floor is clad with mosaic tiles in a hexagonal pattern.  The walls are clad with rectangular subway tiles.  The bathtub, sink, and cabinet are all original.

Upstairs are a family bedroom, a second bath, a servant’s bedroom and a sleeping porch.  In the early part of the last century, before the advent of air-conditioning, when tuberculosis was common, fresh air was considered necessary to health.  For well-healed homeowners, an upstairs sleeping porch with cross-ventilation was a desirable luxury.

At the rear of the house is the large brick garage building.  It matches the construction of the house down to the arched vent in the gable.  It was not meant to shelter a Model T, but a big car, like a Pierce-Arrow, a Packard, or a Lincoln.

William Aubyn Lyon was the eldest son and business partner of W.C. Lyon, founder of the W. C. Lyon Hardware Company.  In the first two decades of the 20th century, Durham’s population exploded from little more than 6,000 to 22,000 and building boomed.  The Lyons made a fortune selling hardware and building supplies.  W. C. Lyon was among the first to move his family to Club Boulevard.  He built his large prairie-style home at 2423 in 1915.  W. A. Lyon was only 28 when he and Lessie built their Club Boulevard home.  William had served in the Marines during the First World War and had only just returned home to watch construction begin.  He was a partner in his father’s firm and was being groomed to take over its management.  The lot was in a prime spot with the new Durham Country Club located directly across the street.  The street car passed by every fifteen minutes.  The end of the line was at the bottom of the hill.

The Lyon family occupied the house for 63 years.  For them the 1920s were flush, but the Great Depression halted nearly all construction in Durham and the family’s fortunes must have suffered.  The Lyons’ two sons grew up in the house and, like their father before them, both served in the Marine Corps.  William A. Lyon died in 1943, after a long illness.  His obituary records that he gave up his position in the company as his condition made it impossible to perform his duties.  He died following an operation at Duke Hospital.  The list of his pallbearers reads like a Durham Who’s Who.  Lessie Lyon remained in her home for another forty years.  Somewhat straightened circumstances caused her to cut the house into three apartments.  The upstairs was turned into one unit.  The window at the stair landing was converted into a door and wooden steps were added outside.  The front bedroom and living room were another semi-apartment.  Lessie stayed in the rear of the house and held forth in her own kitchen.  She only let her rental rooms to Duke divinity students.  She died in 1985.

The current owners had always wanted an arts-and-crafts style home and were thrilled at the opportunity to buy 2511 West Club.  They love its original features and have sought to maintain them rather than renovate the house.  They are collectors and have filled the house with interesting furnishings and art.  We are lucky to see this remarkable Artistic Bungalow house and we are grateful to the owners for their stewardship.