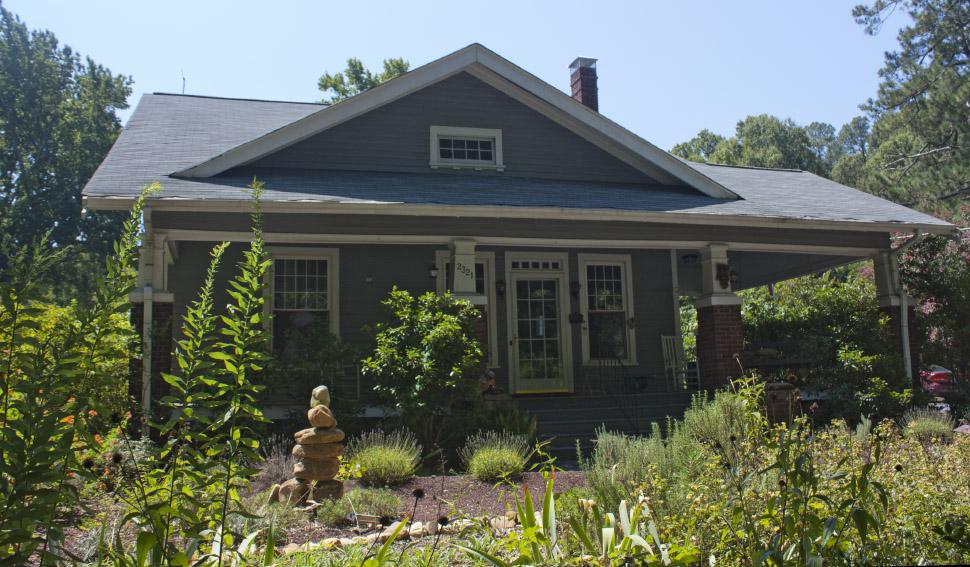 Fall 2022 update: This home is having its 100th Birthday and you're invited!  Find out more about the free (but donations welcome) Garden Party put on by these generous homeowners and Preservation Durham here.

Below, in italics, from the 2001 National Register Historic District nomination for Watts-Hillandale:

Side-gabled bungalow with a front gabled dormer, 12-over- 1 and 15-over-1 sash windows, a French front door with 5-pane transom, and plain siding. The wraparound porch has brick piers with boxed posts.

F. A. Hixon, manager of Woolworth's Dime Store, had the house built. Henry Barton (owner of Barton Electric Co.) and his family bought it in 1937 and lived here many years. 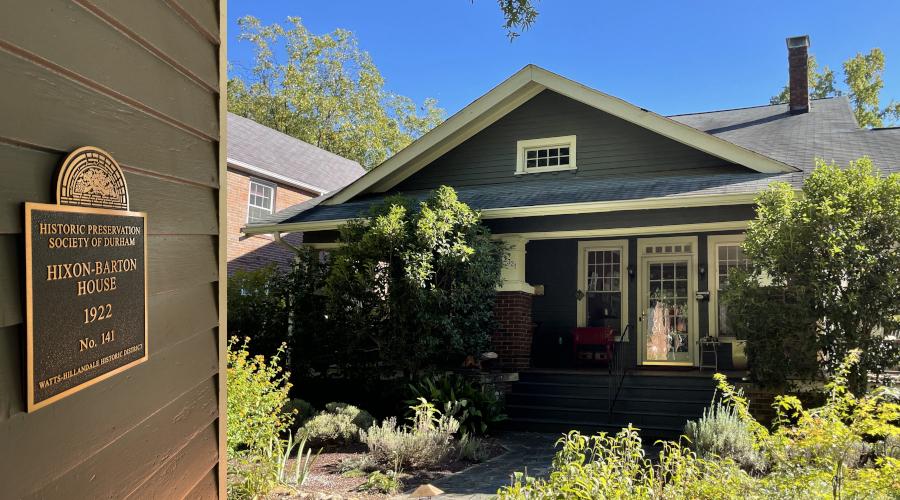 A more detailed house history was compiled by Tom Miller for a Preservation Durham plaque application in November 2013, copied in its entirety below:

This small but high-style bungalow was built in in 1921 or early 1922.  It may have been intended as the home of Dr. and Mrs. William Maurice Coppridge who purchased the lot from the West End Land Company in 1921.  Dr. Coppridge worked at Watts Hospital and maintained an office downtown.  During the early 1920s, he and his wife lived on Club Boulevard near the country club a little further west of the subject property, in the block between Alabama Avenue and Hester Street (now Georgia Avenue).   If the subject house was built for the Coppridges, they did not live in it.  Instead, the house was first home to Fred A. Hixon and his wife, Nelda Pearl Hixon.  Hixon was manager of Durham’s F. W. Woolworth & Co. department store in the Geer Building at the corner of Main and Corcoran Streets.

Hixon resided at 2321 W. Club Boulevard until 1926.  In that year he and his wife moved to a home on Oakwood Avenue, within walking distance of Woolworth’s.  The Hixons retained ownership of 2321 West Club and rented it to a succession of yearly tenants.  In 1927, the house was occupied by Hiram Myers and his wife, Rosa.  Myers was a professor of religion at Duke University.  He was a 1915 Trinity College graduate and later he was a minister at Duke Memorial Methodist Church.  There he earned the confidence of the Duke family and university president William Preston Few.  In 1924, Few hired Myers onto the Duke faculty.  By the mid-1930s, Myers became chairman of the religion department.  (See Durden, Robert, The Launching of Duke University, 1924-1949 (Duke University Press, 1993) p. 152.)

During 1928-1929, the house was home to William Boyd and his wife, Flora (also shown as Minnie in the directories).  Boyd was manager of the cigarette department at American Tobacco (This William Boyd is not William K. Boyd, the Durham historian).  In 1930, Daniel McGregor Williams and his wife, Anne,  lived in the house.  Williams was an engineer who in the early 1920s helped design the dam and reservoir on the Flat River.  That facility was later named for the superintendent of Durham’s waterworks, Capt. John C. Michie. By the late 20s, Williams was assistant superintendent and when Michie retired in 1930, Williams succeeded him as superintendent.  The Hillandale Road water plant (1917-1949) where Williams had his office was subsequently named for him.  (See Durham Sun, September 10, 1976, and PARADE, December, 1994.) In 1930, the Williams family moved around the corner to another early bungalow at 1107 Alabama Avenue.   (See Roberts, Claudia, The Durham Architectural and Historic Inventory, (City of Durham, 1982) pp. 270-271.)  When 2321 West Club was surveyed for the 1931 city directory it was vacant, but during 1932-1933, the house was home to Richard W. Galphin and his wife, Margaret.  Galphin was the manager of Producer’s Mutual Exchange.

In 1934, the Hixons sold the house to W. J. Muse and A. L. Phipps.  Muse was the treasurer and manager of the Fidelity Bank, the principal tenant of the Geer Building where Woolworth’s was located.  Phipps was a teller there.  Muse lived at 1110 Virginia Avenue, just around the corner from 2321 West Club.  Muse and Phipps were undoubtedly acquainted with Hixon not only as businessmen occupying the same building, but in Muse’s case at least, as a neighbor as well.

Muse and Phipps used 2321 W. Club as a rental property.  In 1934, their tenants were Irving E. Gray and his wife, Virginia Gray, who also had a PhD.  Irving Gray was an assistant zoology professor at Duke University.  Virginia taught at the nursing school.  (Many years later, Dr. Virginia Gray took a position in Duke’s Manuscript Department where she became genealogist to the Dukes and a well-known historian of women in the 19th century South.  See Scott, Anne F. Unheard Voices: The First Historians of Southern Women, (University of Virginia Press, 1993) p. 75.)

In 1935, the property was the home of Dr. William M. Smith and his wife, Virginia R. Smith.  Dr. Smith was a radiologist at Watts Hospital.  During 1936-1937, the two-bedroom house was home to a Methodist minister, the Rev. Benson H. Black, his wife, Sarah, and their five sons, George, Jason, William, Harvey, and Benson, Jr.  Of these, all but George were adults.  William was a bookkeeper at the Fidelity Bank’s East Durham branch on Driver Avenue. (See N. C. Death Certificate for Benson H. Black, 1972-1946.)  In 1938, the house was home to Heyward M. Dukes, his wife, Eva, and Claire L. Snypes.  Eva Dukes worked at the Hospital Pharmacy (at the southeast corner of Broad Street and Club Boulevard) and Miss Snypes was a nurse at Watts Hospital.  The directories do not indicate an occupation for Mr. Dukes.

J. H. Barton was an electrical contractor and the proprietor of the Durham Electrical Construction Company and later the Barton Electrical Company.  He was born in New York and came to Durham with Addie in 1935.  They had two children, James Henry, Jr., and Elizabeth.  Elizabeth was 22 years old when the Bartons moved into the Club Boulevard house.  She is not listed as a resident in the 1940 census.  James Henry, Jr., was born around 1930 and did reside in the house with his parents during his childhood.

In 1941, the Bartons purchased the Club Boulevard house from the Muses and the Phippses and resided there until Mr. Barton’s death in the home on November 30, 1977.  Addie continued to reside in the home until 1983 when she sold the property.  She died on January 15, 1986, and is buried near her husband and daughter in the Barton-Pendergraft plot in section 13 of Maplewood Cemetery.  An upright piano in the house is believed to have belonged to the Bartons.

From 1983 until 1989, the house was the home of William Michael Pratt and his wife, Charlotte Catherine Wolf Pratt.  Mr. Pratt was employed at the Research Triangle Park.  The Pratts sold the house to the applicants, Fred A. Peterson and Kathy D. Carter in 1989.  They have resided in the house since the time of their purchase.

Fred Peterson is a pension actuary with Aon Hewitt.  Kathy Carter is a data manager with Duke University.  Both are active in the Historic Preservation Society of Durham where they have served as officers and directors.

The house is an end-gabled craftsman bungalow with a broad, shallow attic dormer over the front entry.  The rectangular window in the dormer is divided into eight lights and the window frame rests on four blocks or quoins.  This window is repeated in the west-facing gable over the wraparound porch.  The slope of the roof in the end gables is unbroken and its importance as a defining architectural element is stressed by the deep roof overhang.  The tails of the bargeboards are notched.  The house is uniformly clad with narrow clapboards.  The engaged porch is supported by four relatively short truncated pyramidal craftsman columns on tall brick pedestals.  The brick is the wire-striated and randomly flashed brick so popular in Durham during the 1920s.  The mortar joints are deeply raked.  The pedestals have cast concrete caps.  The front door and the double-hung windows on either side are located within the central bay formed by the columns and consequently to the left of the center of the mass of the house.  The front door is surmounted by a five-light transom.  The windows are not original, but retain the twelve-over-one arrangement of the original window lights.

The house employs a typical bungalow plan.  The front entry opens directly into the living room occupying the northwest corner of the house.  The colonial-style fireplace in this room is original.  Beyond the living room is a large dining room.  Originally, there was a breakfast nook separating the kitchen from the dining room, but this was eliminated in a later remodeling of the kitchen.  The kitchen and a porch were originally contained in a one-story el on the rear of the house. The original porch flooring is still visible as a ledger along the exterior west side of the el.  Along the east side of the house are the original two bedrooms separated by a bath and small hall.  The house retains its original doors, hardware, casework, and moldings.  In the public rooms, the picture molding is topped by a deep crown molding.  The doors have six panels and the knobs are hexagonal brass.  The dining room is lit by a tripartite set of sash windows with a nine-over-one lighting pattern.  The windows are replacements, but the light pattern is original.

In 1997, the attic was finished as a master suite.  This work did not change the exterior appearance of the house or significantly alter the interior.  In 2004, the kitchen (which was not original) was updated and the rear porch area which earlier had been converted into a den living area was remodeled.  In this project, the rearward el was extended five feet.