210
Gray Avenue
Durham
NC
Year built
1926
Year(s) modified
1936, 1980s
Year demolished
2022
Construction type
Brick
Neighborhood
Cleveland-Holloway
Use
Dry Cleaners
Laundry
Printing Company
Newspaper
Church
Building Type
Church
Industrial
Can you help?
You don't need to know everything, but do you know the architect?
Log in or register and you can edit this. 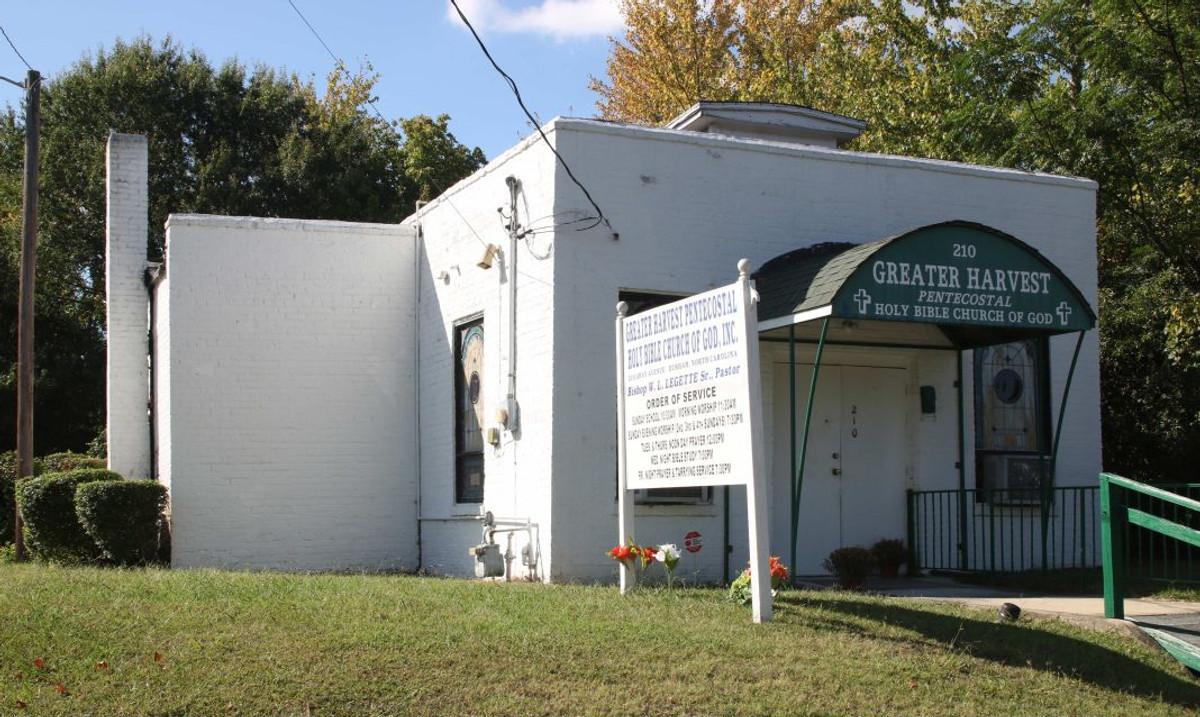 This building was originally constructed in the mid-1920s as the "sanitary plant" for a laundry company, Sanitary Dry Cleaning, Inc - apparently an off-site facility for a business with a storefront at 114 North Church.  A man named John W Hudgins was then the proprietor of Sanitary, having taken over an operation earlier run by Cecil Wilkerson around 1917.  Laundry services were a rapidly expanding industry at the time, and Hudgins seemed to have grasped that huge cleaning emergencies could often be caused by the tiniest humans:

Excerpt from a Sanitary Dry Cleaning ad in the 1926 Hill's Durham City Directory, the first to reference the company's plant at on May Street (online via archive.org).

​For a brief period in the late 1920s, Sanitary also operated a branch location in Hayti, first at 707 and later at 611 Fayetteville Street.  It is likely they serviced both branches from this central plant.  The deep, narrow building seems to have been constructed all-but touching the earlier residential structures that once stood at 707 North Roxboro and 212 May Street - the latter having been the home of Hudgins and his wife, Lola, in previous years. 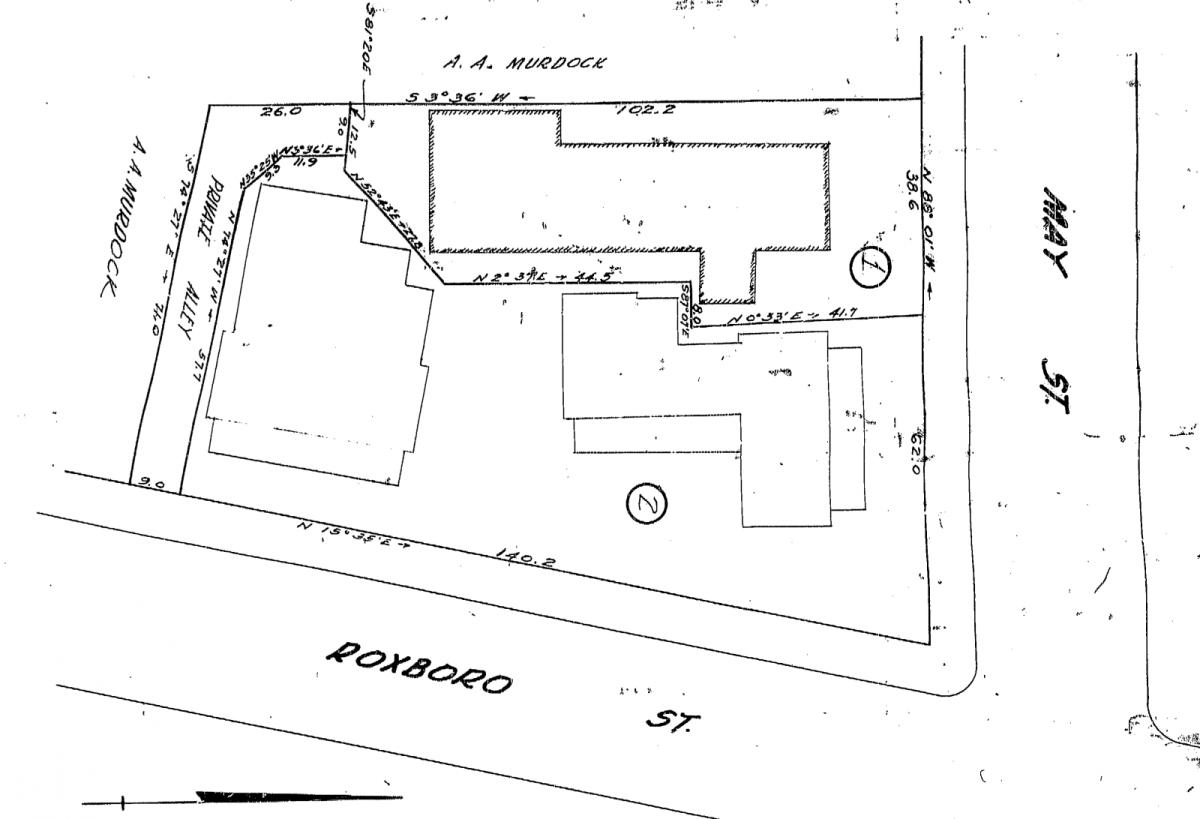 Plat map from January 1935 showing the close proximity of the laundry plant building to adjacent residences (Durham County Register of Deeds, Plat Book 10, page 83). This map was likely created to separate what had previously been a single parcel including all three buildings. Note the "private alley" at left which may have been used to access the plant at the rear from Roxboro Street.

Though they were still advertising in the Durham Sun as late as April 1932, Hudgins folded his business and the bank took ownership of the property that June. The building likely stood idle like many other commercial structures during the depths of the Great Depression, appearing on an immense list of properties controlled by Merchants Bank in October 1934 as a "single story brick building....Constructed for dry cleaning plant, but suitable for other medium size business."  In the years that followed, the business that came to embrace that opportunity would be called Durham Printery.  Incorporated in 1936 by a couple - William W. and Ruby M. Drakeford - and Walter S. Britton, the group briefly published a weekly paper called Carolina News. 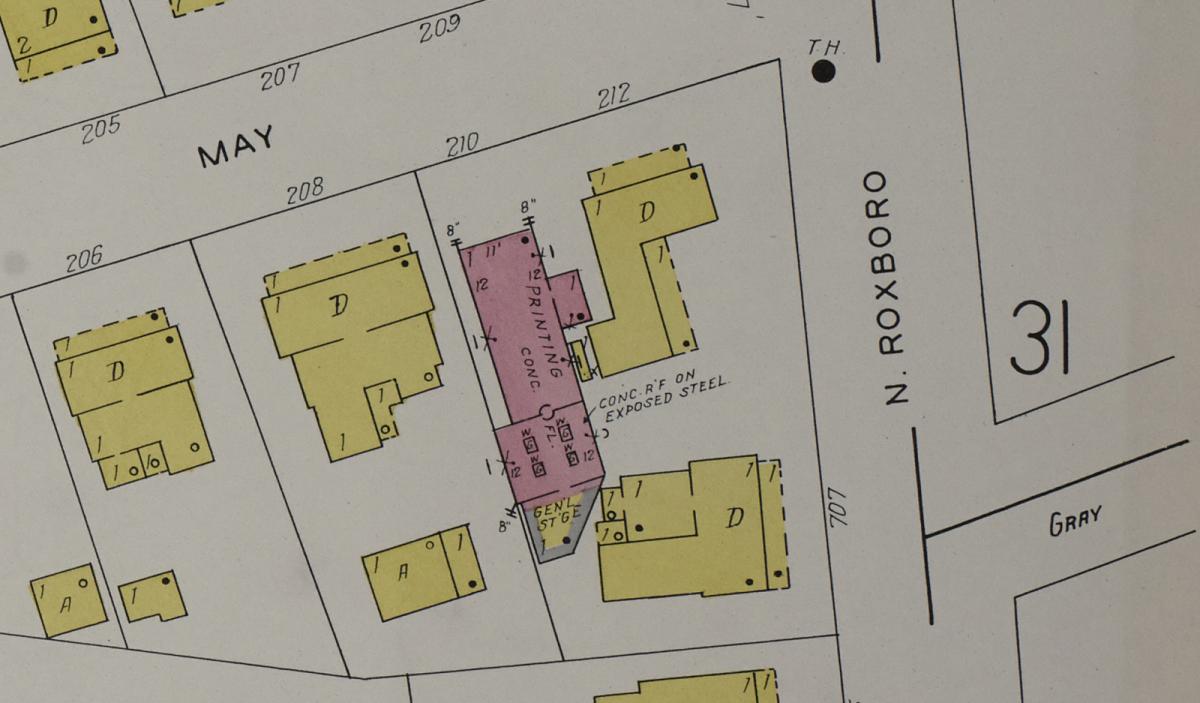 Excerpt of 1937 Sanborn Fire Insurance Map showing the brick industrial building at 210 May clearly labeled for its new purpose as a printing house. The "gen[era]l st[ora]ge" addition at its rear seems to have been added since the 1935 plat pictured above. The adjacent residential structures were both present in the previous addition of the Sanborn maps in 1913 (full page original online via Library of Congress).

While the printing business seems to have been largely run by her husband, Ruby Drakeford was the one to buy the building from the bank in 1935 (the plat pictured above is in her name), and clearly has the richer Durham biography.  She was a longtime public school teacher, working at the Edgemont School at the time she became a partner in the Durham Printery.  She was the daugher of James W. and Anna Leigh Markham - her mother having grown up on Leigh Farm.  After their marriage in 1933, the Drakefords lived in with Ruby's widowed mother in the home where she had grown up, not far from here at 507 Cleveland.  Skipping ahead significantly, Ruby Drakeford would live to the age of 112, verifiably the oldest living North Carolinian at the time of her death in 2004, more than a half-century after her husband passed away and she retiremed from teaching (see her bio here).

After roughly a dozen years of its operation by Durham Printery, this building was sold to trustees of the Plumbers and Steamfitters Union Local No.585.  The same group that had purchased the nearby property on Mangum for the establishment of the Labor Temple earlier in the decade, Local 585 seems to have been acting on behalf of a number of allied organizations under the umbrella of the Durham Central Labor Union and AFL affiliates.  A press was vital to their organizing and advocacy efforts, and 210 May quickly became home to their Progressive Printing & Publishing Company as well as their official newspaper, the Durham Labor Journal.

Header of January 1946 issue of Durham Labor Journal, prior to the acquisition of the former Durham Printery facility on May Street (see UNC Libraries digital exhibit, Papers for the People).

The name for this short segment between Cleveland and Roxboro changed from May Street to Gray Avenue - which continues east across Roxboro slightly to the south - likely as part of the expansion of city limits and large-scale renaming of roads around 1959.  In the late 1960s, the paper printed here changed its name to Labor News, and it appears to have ceased printing altogether by fall 1972, when union representatives sold this building.  Another period of disuse seems to have ensued.

After reports of revival meetings here in the Durham Sun during summer 1977, the first listed congregation at 210 Gray Ave appears in the 1979 City Directory as Trinity Chapel Holiness Church.  Its pastor was a Henderson Towers resident, Burnette Bishop.  In the mid-1980s, the property was purchased by another minister, Willie L. Legette, Sr.  His congregation, the Greater Harvest Pentecostal Holy Bible Church of God, gathered in the renovated building into the 2000s.  Pastor Legette passed away in 2019, and the property was sold to developers in 2021. 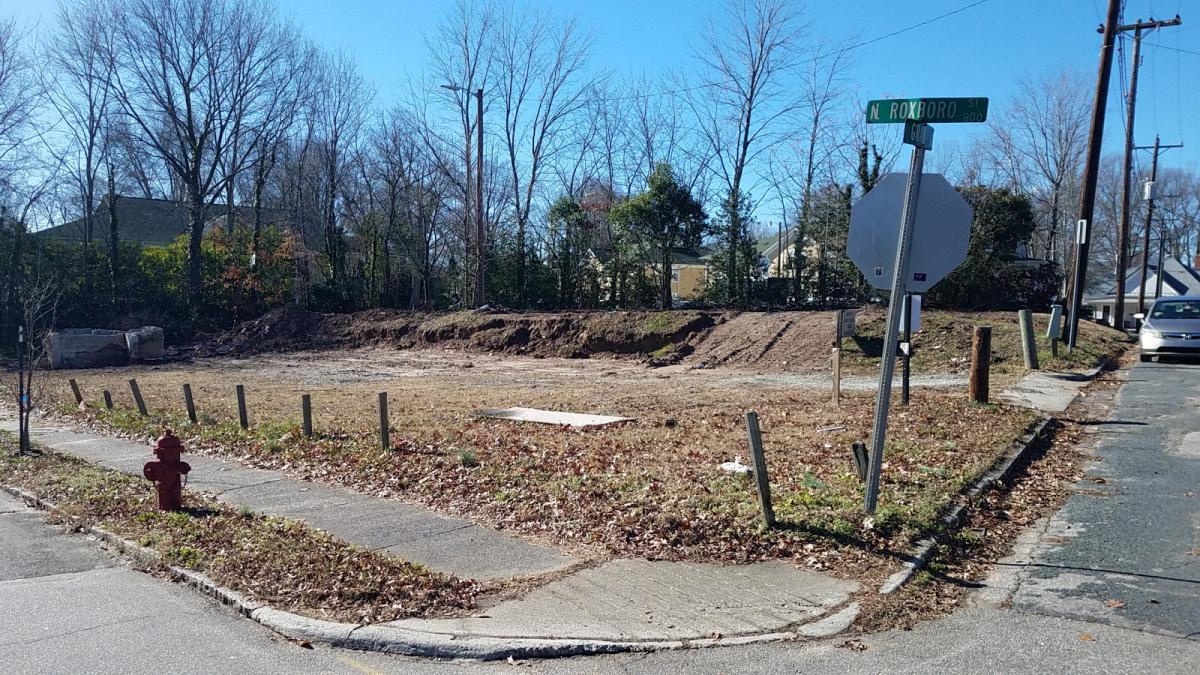 Looking southwest from the corner of Roxboro and Gray, January 2022 (N. Levy). The brick structure at 210 Gray - which stood on the elevated lot in the background - had just been demolished. Remnants of the structure are visible at left. The earlier residential structures closer to Roxboro appear to have been demolished much earlier, with the lower lot used for church parking.