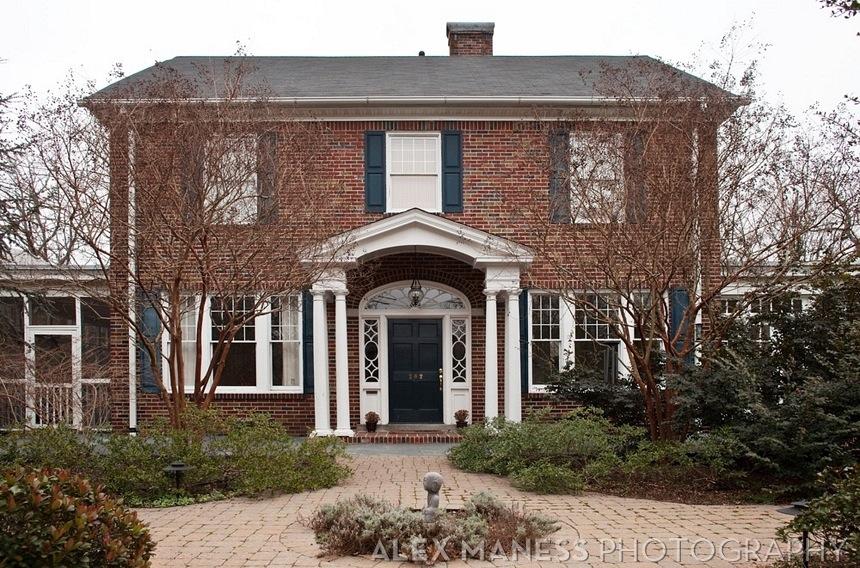 This lovely brick home has features that are both Georgian and Federalist. The square features of the Georgian style are softened here by the curves and decorative flourishes of the Federalist style. Both architectural designs use a centered, paneled doorway, in this case covered by a broken pedimented portico, supported by six doric columns. The spectacular semicircular fan style window over the door and the matching sidelights flanking the door are typical of Federalist design. A striking characteristic of these windows is the curved wooden muntins that support the glass; often windows of this design are leaded glass. This elaborate centralized entrance dominates the front facade of this house.

The low-pitched roof, side gables, and symmetric arrangement of windows is characteristic of Georgian and Federalist design, but the tri-partite twelve-over-one windows on the first floor are Federalist. The symmetry is continued with the screened porch on the left and the sun room on the right. This brick home appears to be red brick at first glance but on closer inspection it is tricolor with a random mix of tan, dark blue, and predominantly red bricks. On the north side of the house remnants of a former addition above the screened porch can be seen.

A previous owner enclosed the front yard with a six-foot brick wall and created a meditative Buddhist garden. Small trees and shrubs soften the brick pavers lining the garden and contribute to the serenity of the space in spite of the nearby busy city street. The property is a pie-shaped lot that is completely fenced. The full basement opens to the back yard with the tip of the pie dropping off steeply to a small stream below.

Upon entering the front door, one is greeted by wall paper depicting Scottish thistle, hand-painted in Scotland. A current owner grew up in old houses in Europe and this 1930s house does not seem at all old to her! Flooring throughout the house is oak and even though some windows are not original, they are appropriate in style. All rooms are spacious and light.

To the right of the foyer is the living room with the only fireplace in the house. This room opens to the sun room and to a back hallway that houses the staircase to the second floor, a unique feature of this house in that the staircase in most houses of this vintage is located in the front hall. There are three bedrooms upstairs, one of which is used as an office by the current owners who work out of their home, and two bathrooms. This house has ample closets, all lined with cedar wood.

The back hallway winds around to the large modern kitchen with a sizable central island. A narrow back porch, original to the house, has been enclosed. The dining room can be accessed from the kitchen and the front foyer.

This very livable 80-year old house has been home to nine families. The original owners of this house were Clayton S. and Sudie M. Carpenter. Clayton and his older brother Marcus were sons of James E. Carpenter, who founded Carpenter’s Inc. in 1893 as a family partnership on Parrish Street. Carpenter’s originally sold horses, buggies, and general merchandise but by 1905 the business evolved to automotive sales of various makes and models. Carpenter [Motor Company]. moved to the [southeast] corner of South Elizabeth and E. Main Streets [in 1923] where it operated as Carpenter Chevrolet from 1935 to 1989 when the family sold the franchise. Marcus ultimately served as CEO.

In 1926 Clayton and Sudie Carpenter bought a lot from Nannie B. Tripp and in 1932 the City Directory listed 202 E. Markham Avenue as the residence of Clayton and Sudie. Clayton worked as a salesman at Carpenter’s. They had two sons, Gordon L. and James E. II. Both Clayton and Sudie died at an early age, he at 41 in 1942 and she at 42 in 1947.
In 1949, Gordon assumed ownership and he and his wife Natalie S. lived here until 1956. Gordon too worked for Carpenter’s in various positions. A daughter Marcia was born while they lived here.

In 1956 the house passed out of the family when the Carpenters sold to Cecil and Margaret Crawford. Cecil was the President and later the CEO of the Greensboro-based Morpul Corporation, a hosiery manufacturer that patented a special knitting technique that created a less constrictive top for hosiery and socks. The term is still used in the sale of socks for diabetic patients.

In 1964 the Crawfords sold the house to Dr. David E. Van Vleet and his wife Norma H. where they lived for 10 years. Dr. Van Vleet ran his dental office at 115 Arcade, Wellons Village. In 1974 the Van Vleets sold to Max M. and Anna K. Hurley. In 1975 Max was listed in the City Directory as retired but in 1978 he was listed as an administrative assistant in the City Recreation Department. By 1986, he was listed as an employee of the Veterans Administration Hospital.

In 2002, widower Max M. Hurley sold the house to Stone Mill, Inc. of Mebane, NC. In 2004 Stone Mill sold to Catherine R. Gutman, who had the brick wall constructed in the front of the house to shield the house from the busy traffic on North Roxboro Street. In 2007, she sold to the current owners.

What a beautiful description of this property. I would love to see the inside of this great house. Many thanks.

Hey, my name is Crystal Hurley. I am the granddaughter of Max M. Hurley and Anna Kay Hurley, who use to own this house. I grew up here and have a lot of memories from this house!!! I was very excited when i ran across this web site on google!!! I would like to talk to you more about it if you would like you can email me at cryssiehd@gmail.com

thank you for keeping my grandparents alive!!!