2002
Fayetteville Street
Durham
NC
Cross Street
Formosa Avenue
Architectural style
Period Cottage
Construction type
Frame/Aluminum Siding
National Register
College Heights
Neighborhood
College Heights
Use
Residence
Building Type
Residential
Can you help?
You don't need to know everything, but do you know the year it was built?
Log in or register and you can edit this. 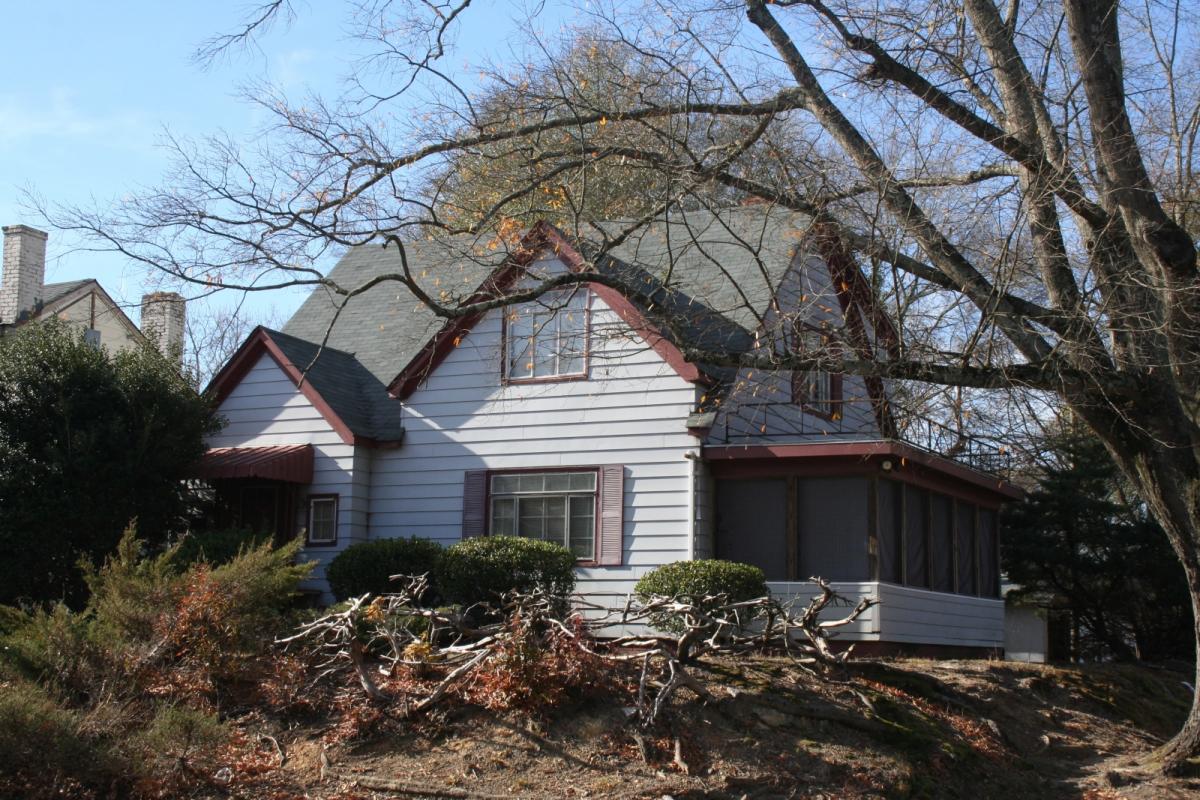 Located at the southwest corner of Fayetteville Street and Formosa Avenue, this one-and-a-half-story, side-gabled Period Cottage is two bays wide and double-pile. The house has aluminum siding, metal-framed casement windows, an interior brick chimney, and triangular louvered vents in the gables. The projecting, front-gabled entrance bay on the left (south) end of the façade has a four-light-over-four-panel door sheltered by an aluminum awning and flanked by two-light metal-framed casement windows. A front-gabled bay on the right (north) end of the façade has a twelve-light window with four-light transom on the first floor and a nine-light window with three-light transom in the gable. The left elevation features replacement windows on the main level with a metal nine-light window with three-light transom in the gable. The right elevation has a matching window in the gable and the main level is obscured by a flat-roofed porch with metal railing at the roofline supported by square posts and enclosed with screens over a vinyl-sided knee wall. A shed-roofed dormer extends across the rear elevation and there is a projecting shed-roofed porch on the rear elevation that has been enclosed with windows at the upper one-third of the wall and aluminum siding below. County tax records date the house to 1947 and the earliest known occupant is Marjorie Shepard, a librarian at North Carolina College (later North Carolina Central University) in 1950.

According the county deed records, Dr. Shepard and his wife, Annie Day Shepard purchased a large parcel of land on Fayetteville Street on April 17, 1924.  On February 17, 1948, Annie Day Smith and her husband I.H. Smith, gave half of their interest to this particular lot to Marjorie Shepard.

Marjorie Shepard died in 1992.  The property was left to her niece, Carolyn Marie Smith Green,  since her sister, Annie Day Shepard Smith had died in 1977.  On April 5, 2005, James P. Green and his wife, Carolyn Shepard Green transferred the title to this property to their daughter, Carolyn Green Boone.  Ms. Boone is the current owner and occupant.