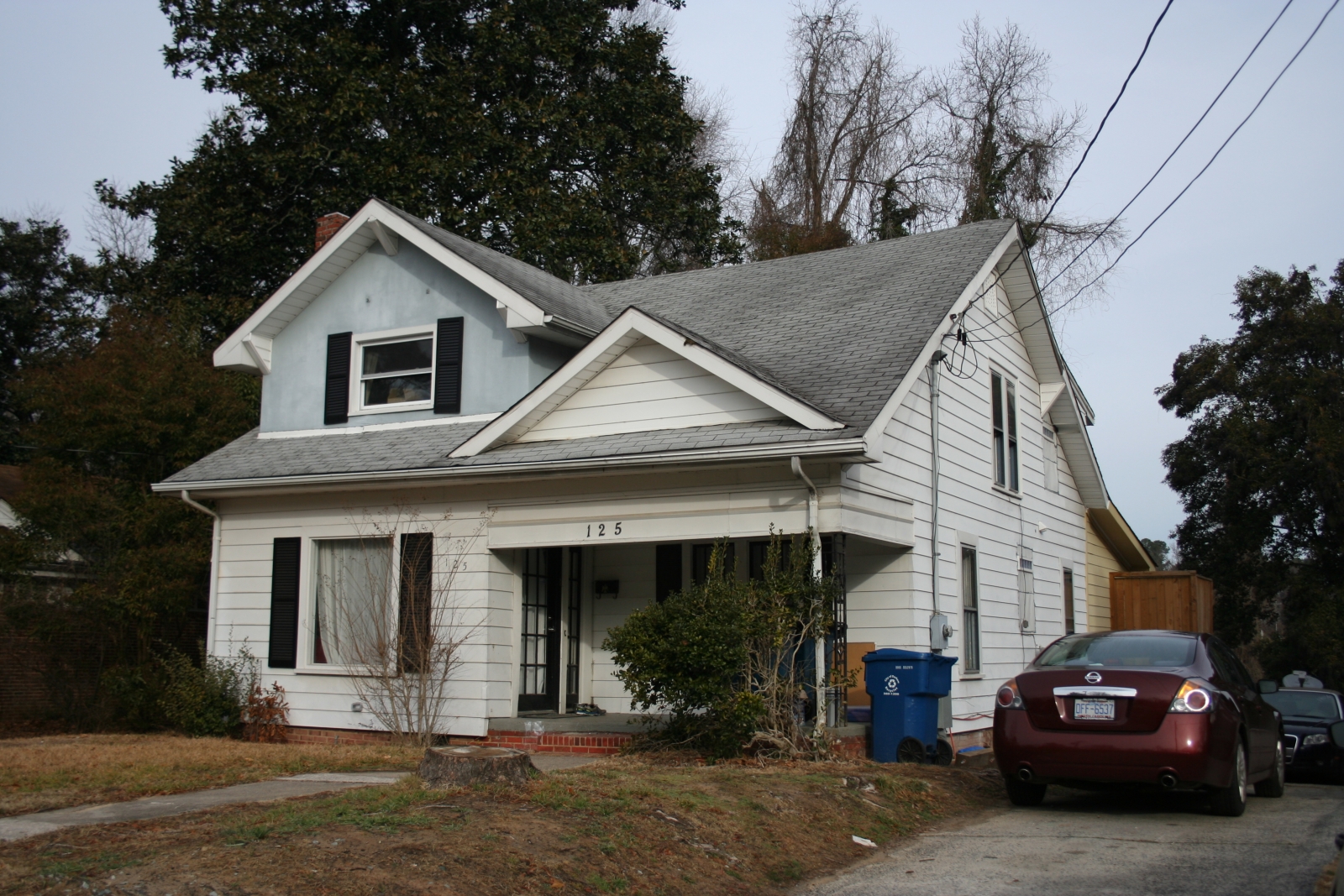 One of the earliest houses on this block, this one-and-a-half-story, side-gabled bungalow has been significantly altered with the installation of a fixed one-light window on the left (west) end of the façade and the alteration of a front-gabled dormer with a smaller window and stuccoed exterior. The house is two bays wide and triple-pile with aluminum siding and four-over-one, Craftsman-style wood-sash windows. An inset porch on the right (east) half of the façade has a low gable at the roofline and is supported by decorative metal posts. It shelters paired windows on the facade and a fifteen-light French door with ten-light sidelights on the left side of the porch. There are paired windows in each gable and aluminum-covered knee brackets in the gables and dormer. An exterior brick chimney on the left elevation is flanked by windows and to its rear is a projecting, shed-roofed bay with paired windows. A shed-roofed wing extends the full width of the rear (north) elevation, which also has a near-full-width, shed-roofed dormer. The earliest known occupants are William H. Peddy, carpenter and contractor, and his wife, Sarah J. Peddy, in 1930. According to the 1955 City Directory, Mrs. Elma R. Peddy, a nurse aide at Duke Hospital, lived in the house.

On September 23, 1957, Pauline Peddy Barringer and her husband, John Barringer, Roberta Peddy Wright and her husband Jerome Wright sold the house to LeMarquis DeJarmon and his wife, Elva. P. DeJarmon, according to county deed records.  Mr. and Mrs. DeJarmon were the parents to one daughter.  Mr. DeJarmon was Dean of the Law School at North Carolina Central University from 1969 until1976.  He died suddenly in December 1981.

According to county deed records, Mrs. Elva DeJarmon sold the house to I. Jarvis Martin and his wife, Norma B. Martin on September 30, 1994.  On December 29, 2000, the Martins sold the house to John Sloan and his wife, Denise Sloan.  After living in the house for some years, Deutsche Bank National Trust took over the house on November 7, 2006 and then transferred the property to Priority Trustee Services of North Carolina on November 23, 2006. The Land Masondale Trust took over the house In December 11, 2008 and rented it.

On June 22, 2016, Douglas L. Smith and his wife, Xin Hong, bought the home from the Masondale Trust and are the current owners and occupants.