1205-1207
Angier Avenue
Durham
NC
Year built
1900-1930
Year demolished
2011
Construction type
Masonry
Brick
Neighborhood
East Durham
Use
Auto Parts
Mattress Company
Building Type
Commercial
Can you help?
You don't need to know everything, but do you know the architect?
Log in or register and you can edit this. 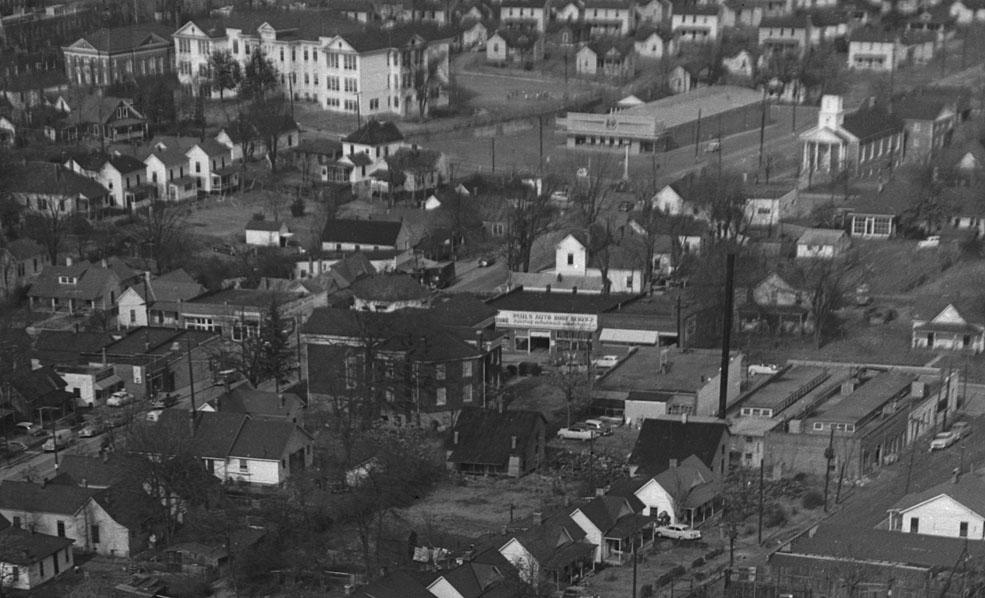 As Angier Avenue follows the railroad tracks and the southeast-northwest ridgeline they sit upon (while E. Main St. tracks in a more easterly direction) the streetcars of the early 20th century followed this path as well - heading east on E. Main St. until reaching Alston Ave. At that point, they would turn south for a block before turning east again on Angier Avenue.

This area became small commercial nexus - at the turn of the line, and at the border between Edgemont and East Durham. On the southeast corner sat (and sits) the Branson Memorial Methodist Church while commercial enterprises occupied the other corners.

This area faded along with the other neighborhood commercial areas. Ironically, the beginning of this commercial transformation is visible to the northeast - in the form of a new supermarket.

Today, although the church remains in good repair, commercial structures have disappeared from the western corners. Abandoned structures remain on the northwest corner.

Folks have been chomping at the bit to tear these buildings down. The city's RKG report - which I belatedly came to realize informs quite a bit of our decision-making - wholeheartedly endorses making these buildings go away. Frankly, I think right now the only reason they are still standing is that perhaps the city hoped the state would pay to get rid of them in widening Alston Ave.

As you would expect, I think it's a mistake to get rid of these buildings. What I really can't understand sometimes in Durham is an odd pairing of mercantile boosterism with a complete lack of faith in the market to turn buildings like this around. Given the huge investments being made around this by HOPE VI (which is about to build several dozen single family homes 1-2 blocks to the west,) the city, and private developers, why would you believe that this needs to be destroyed? To my way of thinking, if you create stable neighborhoods and amenities around this, then people will want to live and work in this area. That's when people see these buildings as an opportunity.

That isn't to say they aren't a problem. The roof is collapsed on one of them, and they've been empty quite awhile. The owner that lives either out on Hollow Rock Rd. or in Trinity Park should be getting spanked with hefty fines for keeping them in this kind of condition. One would hope that would prod them to either 1) fix them up or 2) be appropriately motivated to sell them to someone who would.

In September 2011, a few weeks after acquisition by the Durham Rescue Mission, 1205-1207 was demolished. 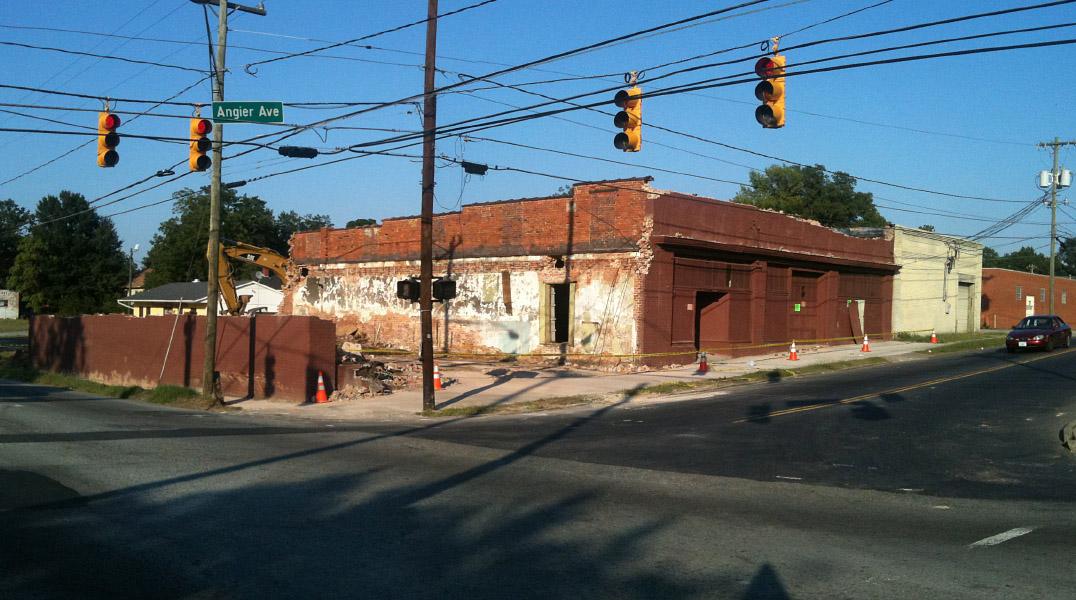 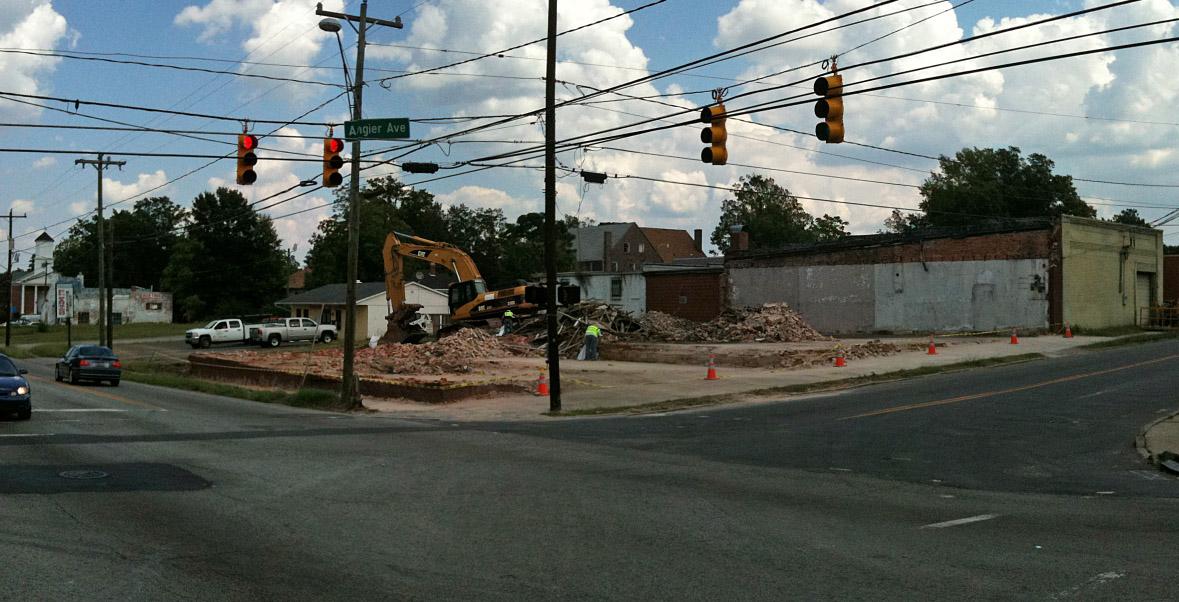 The aerial photo at the top of this page was the subject of a What's It Wednesday?! post on Open Durham's social media accounts (Facebook and Instagram), the week of June 12, 2019.  Follow us and stay tuned for more finds!

I used to drive the length of Angier Ave. daily (when I was taking care of a friend who we had moved out to way-east-Angier). That drive took me past the one-day-maybe-beautiful-again Angier/Driver business district, and then to this corner.

There's so so much that could be done again along Angier. And I'm not just talking about finding the prostitutes a better way of living.

It is too bad about their condition, and the owners should either have to sell them or have them taken away from them. Commercial structures in Durham's value/prices are going through the roof [no pun intended with this structure!], and even this area will one day be expensive.

I still feel that the main reason Durham's bureaucrats are so short-sighted about wanting historic structures torn down is that Mayor Billy has created a culture (so to speak) of getting old buildings torn down, mainly thanks to his employment with UDI.

Today's Herald-Sun has an article on the new use for the Citizens National Bank (East Main & Mangum).

Indeed - what's left of it. I just hope someone can put the brakes on the insatiable desire to demolish out here. It's so odd to me to recapitulate the same mistake. Perhaps the commercial area at Angier and Driver will be spared - but we're turning it into an island.

No doubt we have a culture of demolition in Durham, and a lot of suburbanites in office. There are still people that think we should be creating cul-de-sacs and plastic houses downtown with public money.

Thanks - they called me yesterday for permission (which was nice of them.) I'm shocked that Family and Youth Services is paying $1 Million for downtown real estate. Isn't there something cheaper around?

Does anyone know what the large white building to the west of the A&P was?

Edgemont School. Coming up next week.

I wondered if that was Edgemont School! Can't wait until next week!

That Pope Mattress building housed Bell's Used Merchandise for many years. I have fine memories of the place. In the late '80s I bought an antique armoire there for $200. (I still use it.) The place was heated with a kerosene heater, and the air was thick. You had to climb over furniture. But he had pretty much anything you wanted.

Thanks for the additional info - incidentally, I enjoy your work!

I recently moved into a house on Chapel Hill Rd. in Tuscaloosa-Lakewood. Apparently the Pope family used to own my house and one next door. There is a large concrete pad near the rear of the property which apparently used to be the foundation of the building where they manufactured the mattresses. According to neighbors, it was falling in and torn down in 2011 when the house was renovated.

I remember when there was a grocery store (I think-maybe a Colonial Store-pre the one on Main St) and Grace's 5 & 10 next door. (Bell's and Pope's Mattress buildings) Drug store used to be on the southwest corner (late 40s, early 50s). Also in the 60s NC News (newspaper/magazine distributor was along that same area). Can't remember the name of the drug store.

Anon I hadn't notice a change in that wall, which had been in terrible shape for a long time. (top collapsing inward, old tie-rods installed to hold it in place.) Regardless, no argument that it couldn't persist in that condition and would have needed to be repaired for the buildings to remain viable / stable. GK

This was a Penders grocery in the 30s

I drive by those buildings quite often and had noticed during the past month the wall (that's a half wall now in the picture) closest to Alston Ave had collapsed to what looked to be an extreme hazard to pedestrians and vehicles. Then I saw the green signs.

I bought some used furniture there years ago. It has been closed and vacant for years now...

Oh that means Bell's Furniture is no longer there. Remember for years seeing the sign and all he had for sale sitting out front, going to my grandmothers house on Hyde Park. Mr. Bell and his wife are awesome people, sad to see buildings that are part of my childhood memories, and others before me, being torn down instead of used.

I used to visit with C. A. Pope, the owner and manager of Pope Mattress, frequently when I was a young man. He was about 90 years old at the time, but was full of wonderful Durham stories. He was the son of George and Nannie Carlton Pope and the grandson of Erasmus Pope. Erasmus is buried at Mt. Sylvan Church just down Roxboro from where he and his second wife, Jane Markham, lived with his son and daughter-in-law, Henry Jackson and Anna Emerson Pope, in the beautiful steamboat gothic house where H J and Anna Pope's great-granddaughter lives today. If you haven't done a post on that house (and the multi-generational Pope houses that surround it), you should. I think the house was built by the original superintendent of Orange Factory.

Curtis, do you know if this is the same family as that of dear Velera Pope, who recently passed at the age of 92? I'm guessing it must be, as her family was in the mattress business, though I thought they manufactured mattresses at a different site.