117
West Seeman Street
Durham
NC
Year built
1920-1930
Architectural style
Bungalow
Craftsman
Construction type
Frame
National Register
North Durham – Duke Park
Neighborhood
Old North Durham
Use
Residence
Building Type
Residential
Can you help?
You don't need to know everything, but do you know the architect?
Log in or register and you can edit this. 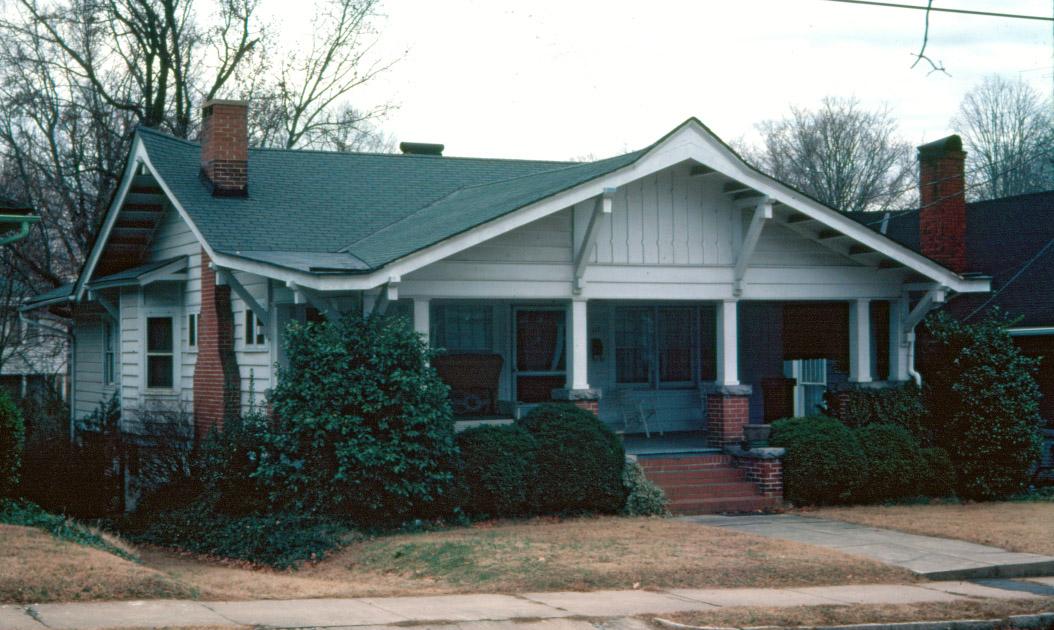 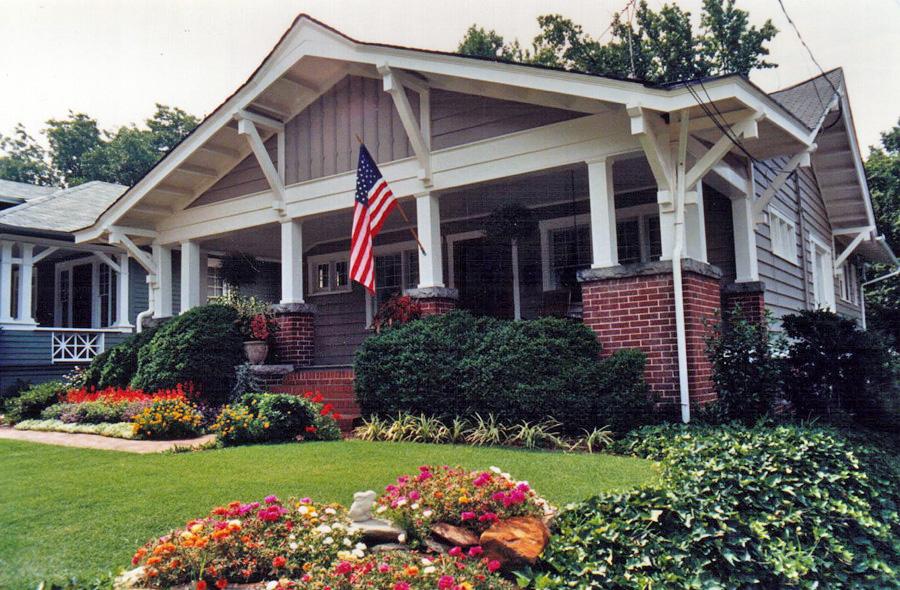 National Register Nomination: Another of the six Seeman Street bungalows with oriental motif seen in peaking of roof in massive front gable over porch and side gables. One story with weatherboard siding.

Bill Phillips, who restored the house with his wife during the 1980s, had the following article about the house published in American Bungalow in the Winter 2001-2 edition. All photos courtesy Bill Phillips.

In 1980 my wife and I were trying to restore a log cabin on 30 acres of land, 30 miles away from Durham, but by late that year it just seemed like too much work and too much driving, so we started looking for a house in town.  By word of mouth we went to see 117 W. Seeman St, an unadvertised 1400 sq. ft. house on a 50-foot lot in a 60-year-old neighborhood. When we walked in the front door we stood in the middle of a living room that was one of the most carefully made and well preserved pieces of carpentry I had ever seen.  We were told it was a Craftsman bungalow... a what?

Unfamiliar with the style, I still had no doubt that I was looking at a superbly designed and crafted structure, square, solid, plumb, straight, and almost an integral piece of furniture in itself.  I had started a home remodeling business and was beginning to get the essence of fine architectural detail, and I knew that we had a rare find here.  We bought it immediately, and in short order we became students of the Craftsman era.

I quickly shed my 70’s folk/woodsman persona, and began looking toward more modern models, well... like Woodrow Wilson modern.  I bought a pair of wool knickers, I learned to tie a real bowtie; and the 1920’s of the average person became my decade of interest.  Pardon the fantasy, but the vision went so far that I trimmed my beard and began using a straight razor around the edges, honing it on a stone and leather strap. 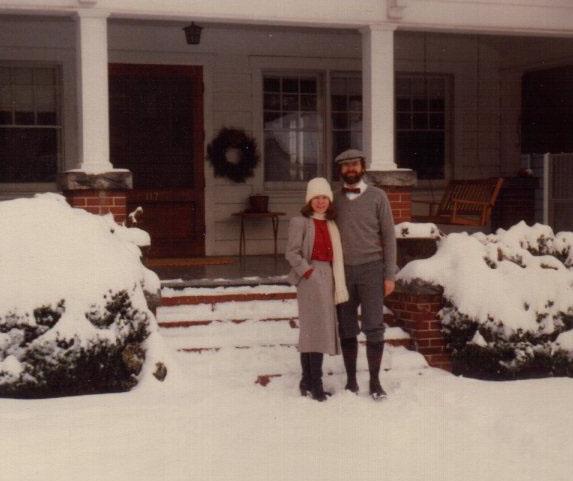 The social philosophy of Gustav Stickley was instantly appealing to me: the self-reliant, unpretentious, democratic regard for the each person, the integrity of being middle class and the desirability of functional tastes.  It seemed like a short leap from allegiance to Thoreau in the 70’s to affection for Stickley in the 80’s... and just as short a trip from a cabin on Walden Pond to a bungalow on Every Street.

A magnificent set of mission oak dining room furniture built in 1916 and originally purchased by my grandparents had been given to me by my family.  I had not realized that there was a perfect dining room waiting for it till we found this house.  Thus began our home’s ten year transformation from its vintage state with its coat of 50’s lime green paint throughout to our eventual interpretation of how such a house might be restored/remodeled to keep its original integrity and still meet the needs and expectations of a current life style.  The house transformed, as we, its stewards, did as well over that time, having really no idea what the end of the decade might bring.

The first room to get attention was the dining room. The walls were covered with faded and stained wallpaper... large roses, certainly not an original feature, as became clear during the hours of steam and sludge that eventually got me down to bare plaster walls.  Everyone should have to remove wallpaper... once.

As we were planning the paint colors for the dining room we attended a home show and met a woman who was starting a home stenciling business.  The authenticity of the pattern she used is not clear, but it was extremely appealing to us.  In this room I made the commitment to strip every piece of painted brass hardware down to bare metal: hinges, door mortise lock sets, and transom lifters. It became a labor of love, sometimes love lost, that lasted for several years from room to room.  Finally, oil paint followed serious hand sanding on the woodwork. 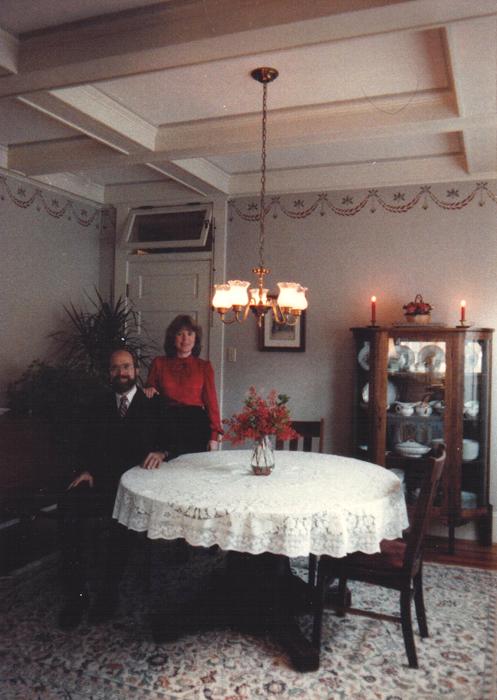 Calvin Coolidge could have eaten dinner in our completed dining room and never batted an eye, though I have never been completely dictated by historical authenticity in my remodeling work. Cost considerations are a large factor in that, and utility of design is another. But my general rule has been, “never destroy anything of quality design built by skilled hands.” 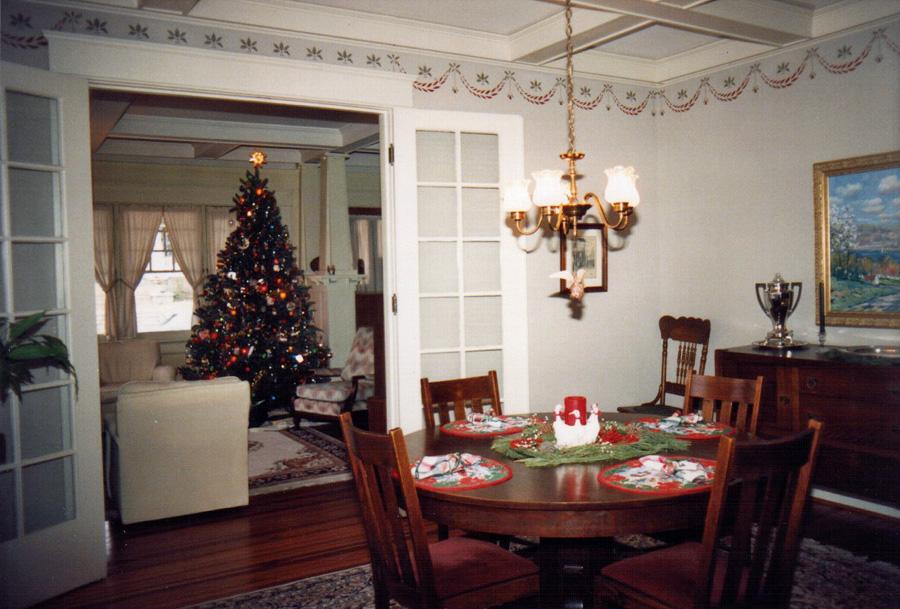 Of course, the house within the house is the kitchen, a culinary workshop, a social crossroads, a forum for home politics.  It went well.  My wife and I seemed to want to find solutions even when there was disagreement, and I think we did fairly well at it. The kitchen had no unique architectural features and was gutted; the exterior back porch was incorporated as interior breakfast space with a wall of three French doors.  Oak was laid on the floor, instead of the original heart pine existing throughout the rest of the house, and we installed new cabinets with ceramic tile countertops.

The kitchen became the heart of the home, an engaging space, in a crowd or alone.  It produced laughter, chaos, order, soufflés, crepes, pancakes by the gross, and incomparably complex and delightful dinners for six or eight created and served by Ginny. 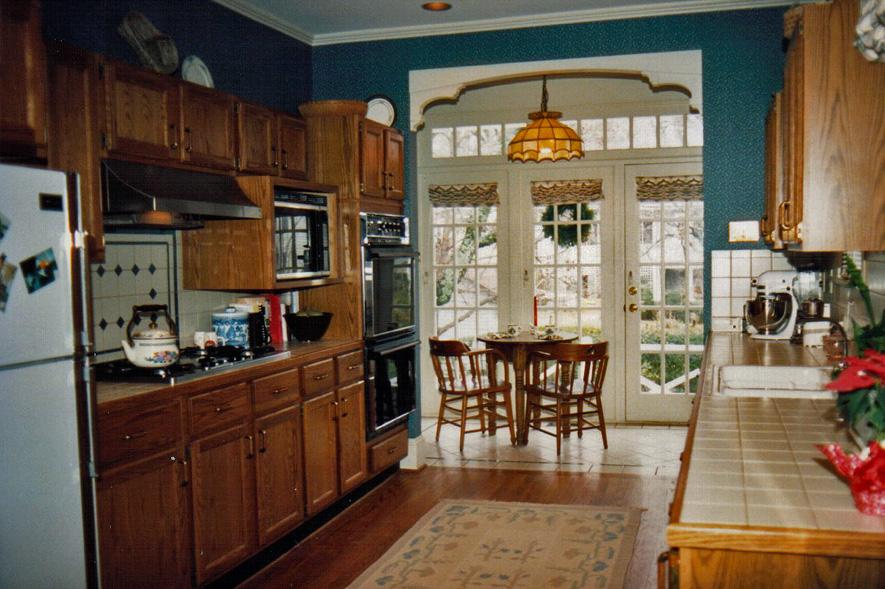 At this point we were three or four years into the project, and we began to sense that this was going to take a while, possibly because it should have, possibly because we had a problem with perfectionism, and possibly because there is life to be lived in the meantime.  And life as well as lifestyle, that had seemed so simple earlier, had begun to grow in layers of complexity, at moments beautiful, at moments perplexing, and at times haunting.  But the bungalow always forgave, and always waited, and we always came back to it.  And there was never a night that I wasn’t happy to come home and find the comfort and companionship waiting in its shelter.  Truthfully, I often thought that Gustav would have wanted it that way, and that, in his many pursuits, that was all he was really looking for. 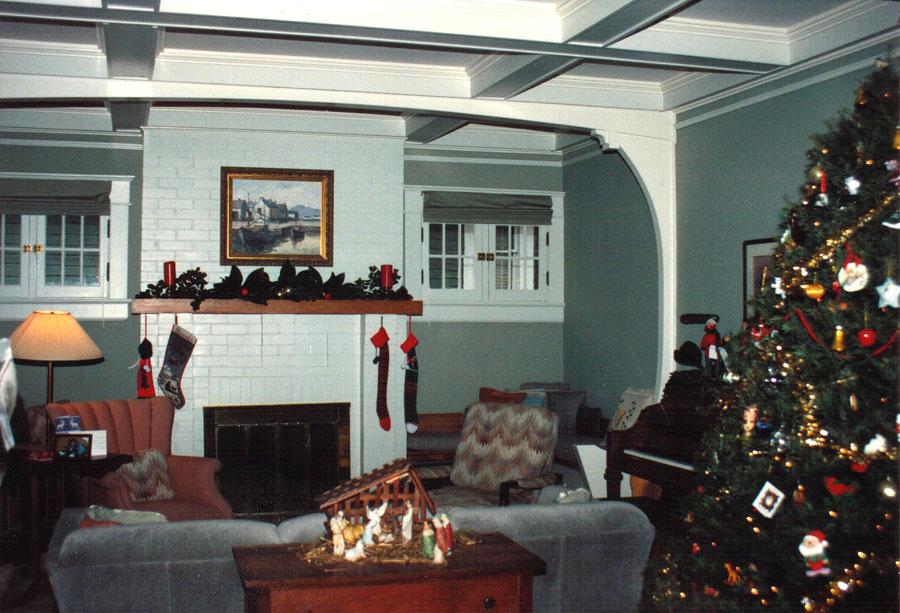 The bathroom came quickly and on impulse just before a family visit. A vanity replaced a wall hung sink, a carpet was installed (we weren’t splashers), and a looped rod provided a shower space in the claw foot tub.  Oh yeah... the oak toilet seat.  The two bedrooms got late attention.  The living room, a tribute to the under-rated, underpaid carpentry aesthete of the 20’s, needed only the perfect paint scheme to highlight its detail. By this time I had quit painting, and we hired painters.  The same was true of the exterior. 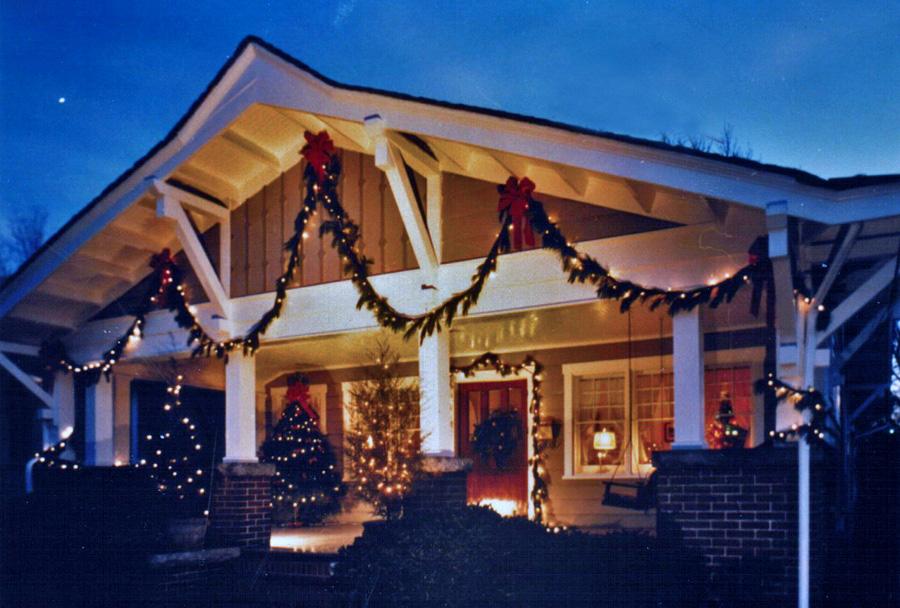 As the 80’s ended and the 90’s began, family circumstances and goals changed. The bungalow was sold and new accommodations provided certain conveniences, particularly for our young son, such as two bathrooms, a larger yard and an extra bedroom.  But the sense of place that the bungalow provided seemed lost… possibly because there was no social philosopher such as Stickley to promote the merits of brick ranchers.  So, the ten years in the bungalow became framed as a an almost magic nostalgic moment where all (or most) of the pieces fit, a tribute to a simpler time in lifestyle as well as architectural style. 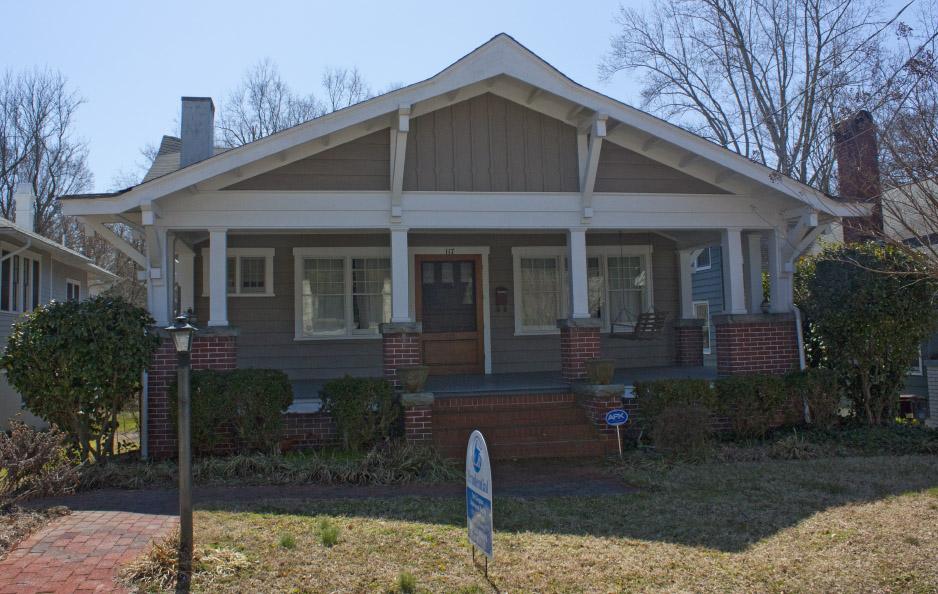