North Durham is one of Durham's earliest recognized suburbs. Before its development in the 1890s, the area was part of farms belong- ing to Jesse Geer, his son Fred C. Geer, and A.M. Rigsbee. The oldest surviving house in Durham may be the Geer Farmhouse now located at 326 East Trinity Avenue.

Attorney James S. Manning and printer Henry E. Seeman led the northward migra- tion from downtown Durham as early as the 1880s. Manning's impressive Queen Anne style house at 911 North Mangum Street is distinguished by steeply peeked gables rising over a wide front porch and applied decora- tion emulating half-timbering. The Manning House has been known popularly as the Bull Durham House since 1988, when it featured as a major location in the movie Bull Durham. Residential development in North Durham began in earnest in the late 1890s. The desirability of suburban living was greatly enhanced by the construction of a north- south trolley line in 1901. Now residents of North Durham had to walk only a few blocks to Little Five Points, where Cleveland Street meets Mangum and Corporation, and catch the trolley to ride the rest of the way to the Central Business District. That same year Brodie L. Duke began real estate ventures that led to the establishment in 1908 of the Duke Land and Improvement Company. Duke had bought up much of the Geer and Rigsbee land late in the 19th century, and in 1901 he subdivided his acreage and began selling building lots.

Over the next two decades, successful businessmen and professionals built a Mansion Row of homes along Mangum Street. Many of the homes were influenced by the Colonial Revival style, with neoclassi- cal elements of Tuscan porch columns and pedimented gables accenting simple rectangu- lar houses. Occasionally, richer decoration was achieved with Ionic or Corinthian columns. The Mangum Street houses on today's tour exhibit that eclectic mix of styles, from the solid brick neo-Colonial of the Oren Belvin House (918 North Mangum) to the Arts and Crafts style of the Elliott-Ferrell House and the Pickett House (1207 and 1208 North Mangum). In between is an interesting mix of architectural styles, from the understated Christian Wynne House (921 North Mangum), built in 1925, and the ca. 1895 Mason-Umstead House (1112 North Mangum) to the more flamboyant Maynard Mangum House (1111 North Mangum) and Frank G. Satterfield House (922 North Mangum) with their wide porches, overhang- ing eaves, and prominent third-floor dormers.

Entrepreneur Maynard Magnum was respon- sible not only for the construction of his own house, designed by Durham's Rose and Rose Architects, but also for three other houses on North Mangum and Lynch streets that he commissioned contractor Lonnie Glosson to construct for relatives and employees.

East of this new development, the old farmhouses were being surrounded by new homes as streets were built to accommodate the growing population of North Durham. The Scruggs-Fowler House (S09 Edward Street) was reportedly the first house built on Edward Street, which was cut through from Roxboro to Elizabeth Street around 191 S. Dr. James McCracken built the fanciful turreted cottage at 210 East Trinity for his mother-in-law, Mrs. SJ. Hall, in 1902. McCracken's own house on the corner of Elizabeth Street was moved slightly west to make way for the construction of the Rose and Rose designed neo-Gothic Calvary Methodist Church in 1916. Feed store owner H. Raymond Byrd built the bungalow at S 16 East Trinity in 1921, only two years before the original Geer farmhouse was moved to a site on the same block.

While things were booming to the east, the hillier west side of Mangum Street remained fields and woods separating North Durham from the Pearl Cotton Mill Village. Fred Geer built the folk-Victorian style house just west of Mangum Street in the 1880s, at what is now 112 West Lynch Street; the street is named for the Lynch family who lived here from the late 1880s until 1897. But it wasn't until the 1920s that investors and individuals desiring to build their own homes began to develop the area in earnest.

The bungalow was a very popular house type throughout Durham and some of the most imaginative and fanciful renditions of the style in the city are found on the south side of West Seeman Street. A row of five houses here exhibit exaggerated bungalow characteristics including long sloping roofs flaring upward at their peaks, with wide overhangs and exposed decorative rafter tails; porch supports consisting of multiple elements to emulate joinery; and applied decoration imitating structural units containing attic vents. The Tandy-Strickland House (117 West Seeman) is on the tour today. Other classic bungalows on the tour are the Mozelle and John W Moore House (112 West Trinity) and the Inscore-Clapp House (219 Dacian) where the street unexpectedly slopes up toward the west from the flat landscape of Mangum and Roxboro Streets.

Similar to many older urban neighborhoods dating from the turn of the century, North Durham has experienced a transition over the last half of the 20th century. As original and early residents left the neighbor- hood, houses were divided into apartments to meet the housing needs of the less affiuent, and many structures suffered from lack of maintenance. But more recently, new home- owners have begun rehabbing the homes of Old North Durham. Characteristic of this redevelopment is the adaptation of the small grocery store near the railroad bridge, (1214 North Mangum Street). A convenient supplement to the shopping district at Little Five Points, it was frequented by most of the North Durham residents from 1925 until the 1960s. After lying vacant for decades, it found new life in 1980 when it was adapted into an efficiency dwelling.

Old North Durham is today a vibrant and welcoming neighborhood. New families appreciate the legacy they have inherited from the pioneers, entrepreneurs, and first families who developed it and lived here a century ago. 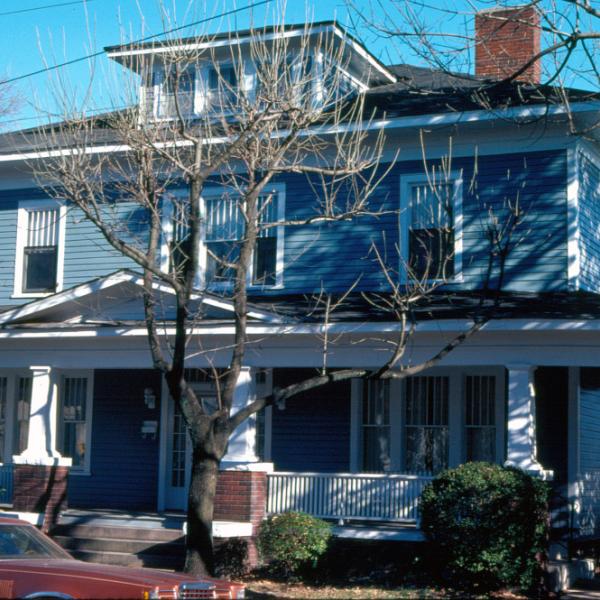 The house was most likely built by Thomas J. Holloway, vice-president of the Holloway-Belvin Shoe Company, in 1916. In 1916, his residence is listed on Elliott Street; in 1917 he is listed here. However, it appears he did not live here long; by 1919, his wife Mrs. Lula D. Holloway is listed at the address as a widow. 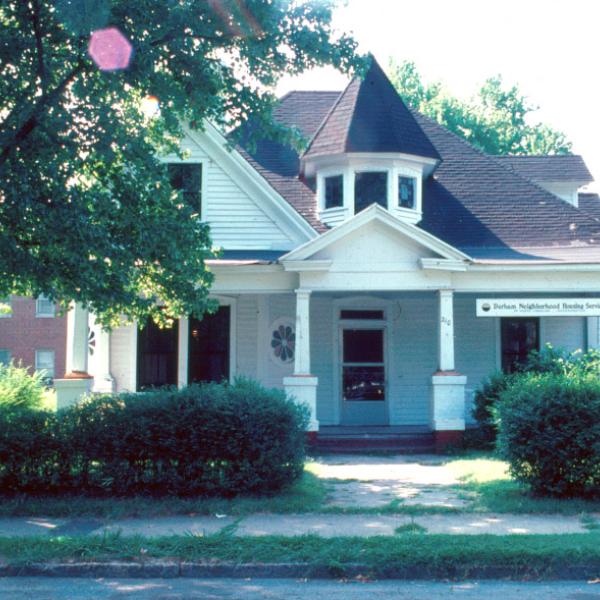 The McCracken-Mize house is one of the most ornate small houses in Durham; it has served as offices for various organizations through the 1980s-2000s, but sold to a homeowner in 2011. 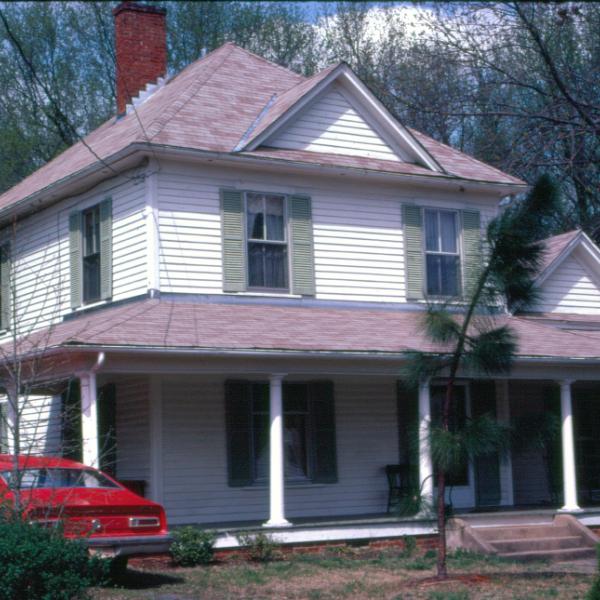 In early 1912, TD Scruggs purchased a parcel of land from Mary W. Geer, an heir to the Geer farm, and built the present house upon it; he later enlarged the property with two additional parcels. He and his wife Lucy lived here until 1917. The house became home to Mary Fowler, and later, her son Atlas Jr. 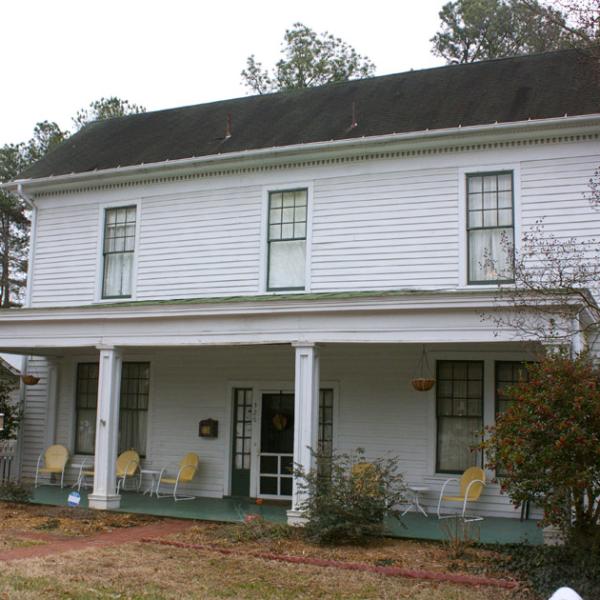 The Fred C. Geer Farmhouse is one of the oldest structures remaining in the City of Durham; much like the Calvin O'Briant farmhouse on Holloway Street, the city has grown to 'enclose' the structure in a city framework, although its move down-the-'block' in 1923 to a street corner gives it less of an appearance of inconformity to the grid than the O... 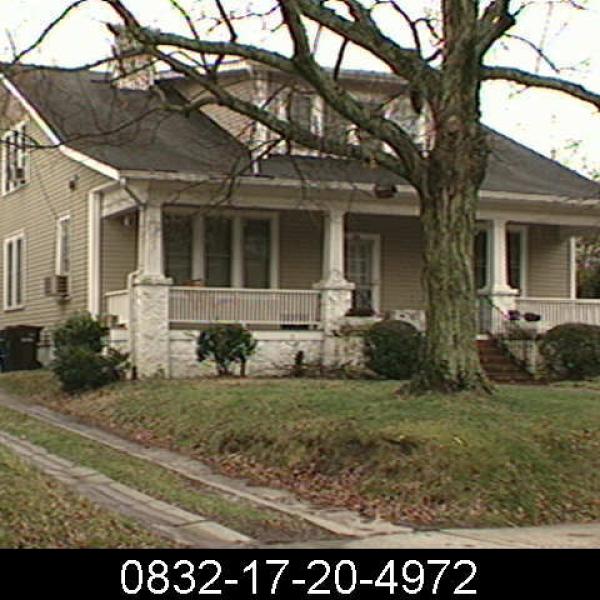 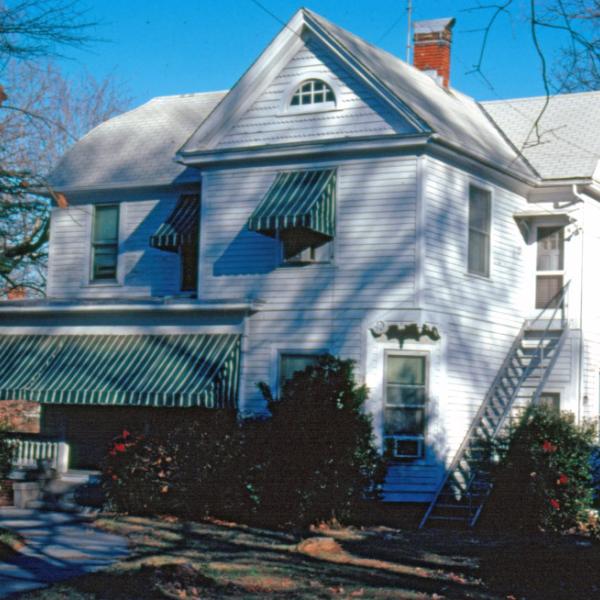 1981 (Below in italics is from the 1985 National Register listing; not verified for accuracy by this author.) Constructed around 1900 for Sol Mason, this late Victorian house was purchased in 1908 by Regnal T. Umstead, a tobacconist from Willardsville in northern Durham County. Characteristic late Victorian features of the house include the various... 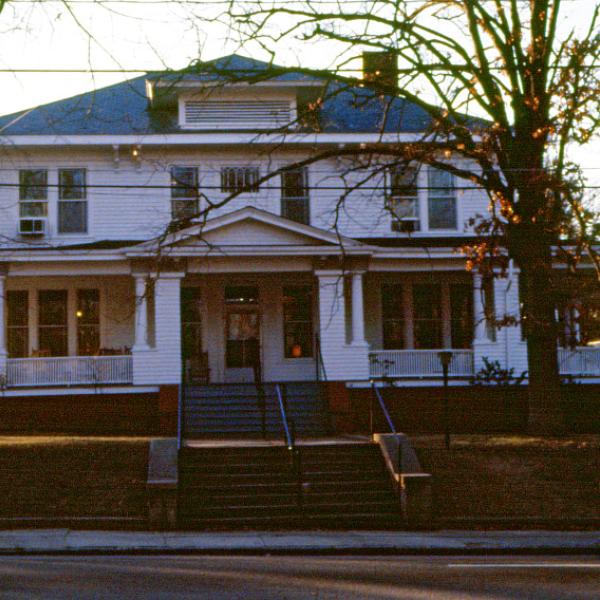 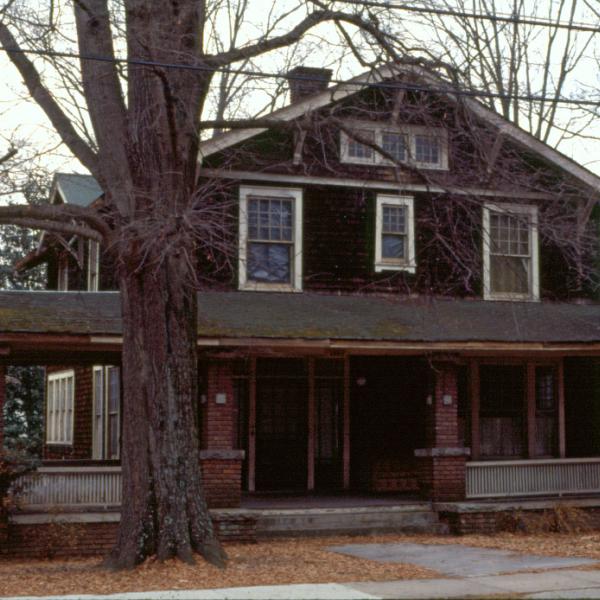 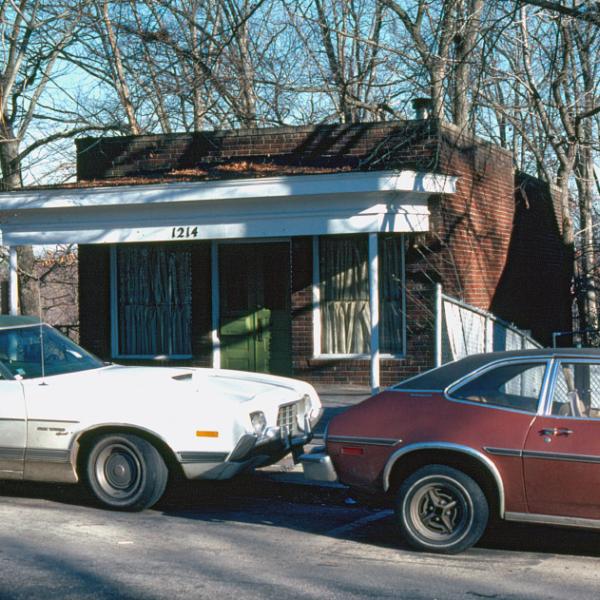 In 1923, J.B. Mason, president of the Citizens National Bank,who lived at 1007 North Mangum Street, hired contractor Lonnie Glosson to build the store. Until 1945, it was occupied by the grocery of H. Perry Carpenter, who lived across the street at 1213 North Mangum Street. Then the business changed hands a couple of times and eventually was... 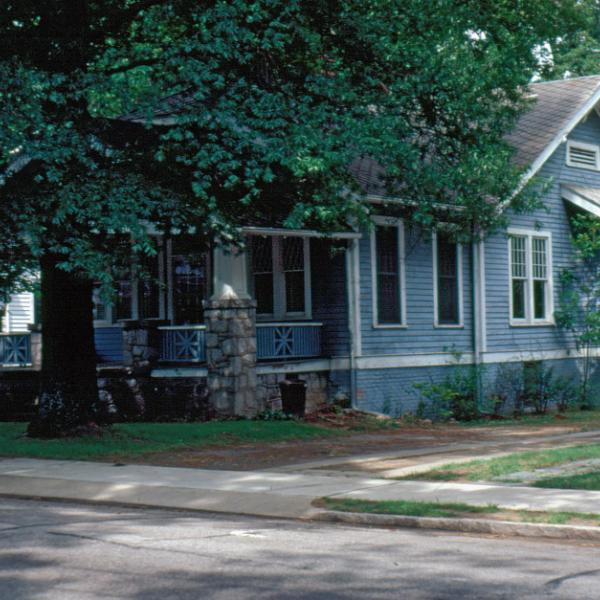 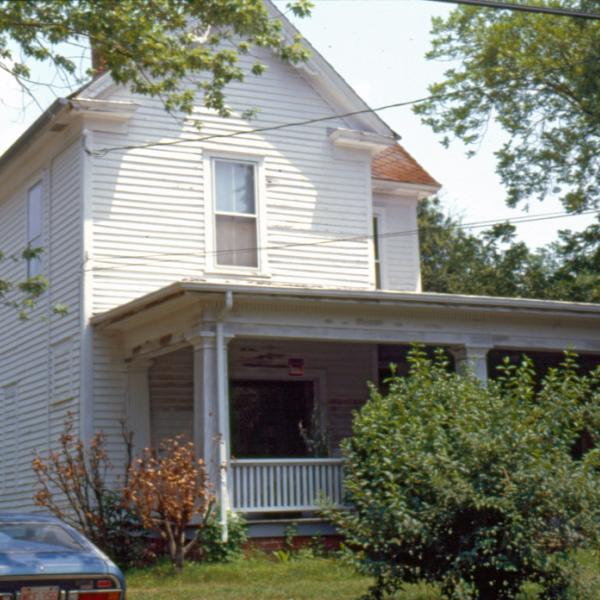 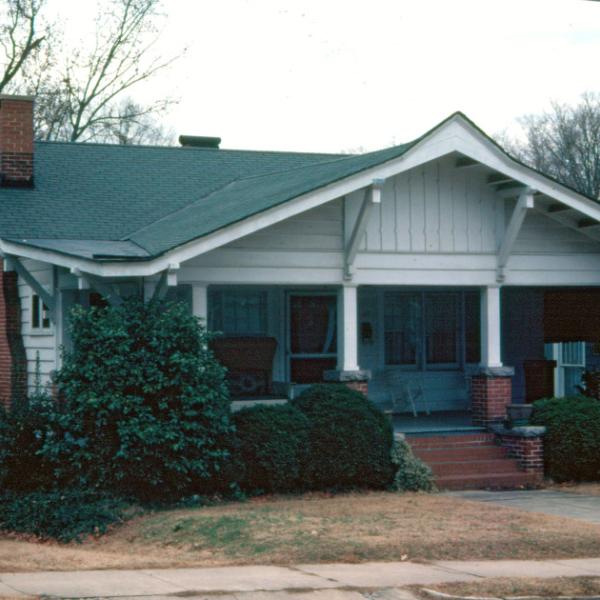 One of the Six Bungalows of Seeman Street - a row of 1920s Craftsman houses with varied unique Asian-inspired exterior detailing. 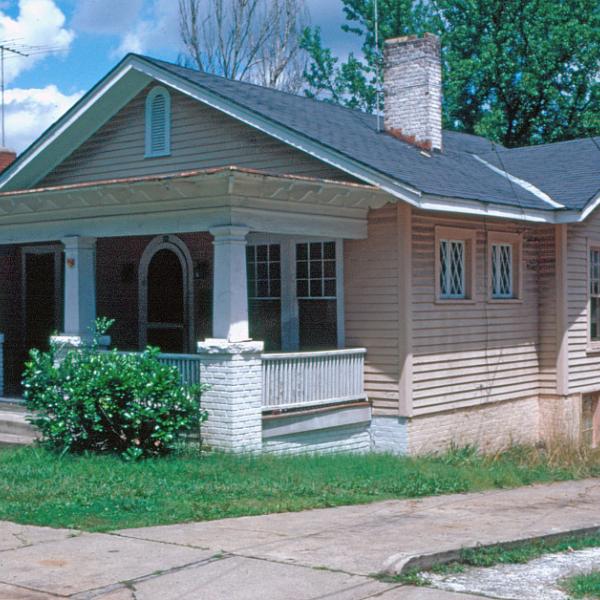 1981 (Below in italics is from the 1984 National Register listing; not verified for accuracy by this author.) Of the numerous bungalows erected during the 1920s and 1930s in the 100 and 200 blocks of west Trinity Avenue, this example stands apart from the rest because of its arched front door and attached porch with sawn curved brackets in the deep... 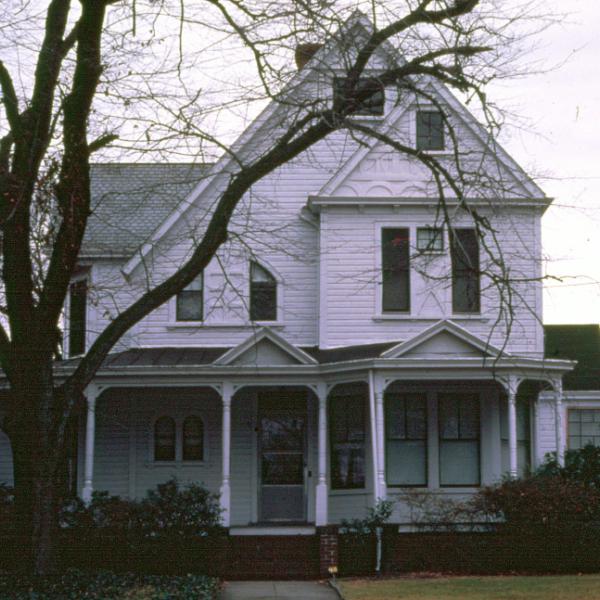 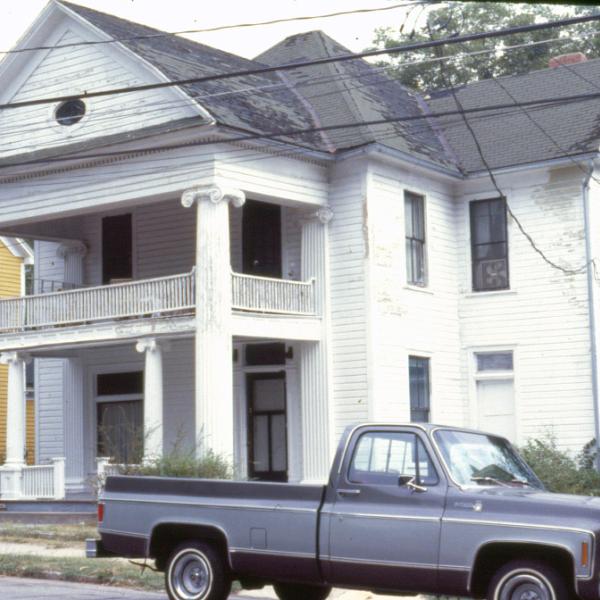 1981 (Below in italics is from the 1984 National Register listing; not verified for accuracy by this author.) In 1909, Dr. Archibald Currie Jordan moved into Durham from his family homeplace at Rougemont to begin a long association with the new Watts Hospital. Dr. Jordan was president of the Durham-Orange Medical Society in 1909, and in that...

I want to comment on "...the hillier west side of Mangum Street remained fields and woods separating North Durham from the Pearl Cotton Mill Village."

In the old directories the address 'Strayhorn' with no street number comes up almost as frequently as Smokey Hollow, but I've been having a hard time finding out exactly where and what it was.  In Turner's 1889-90 Durham Directory, it looks like around 40 people are listed with this address in the "Colored", and another 25 or so in the preceeding "White" listings.

I think the area of 'fields and woods' may have included Strayhorn.  Property records for houses on Dacian between Washington and Glendale refer to Strayhorn and Strayhorn subdivision, but this is one of the only clues I've found..