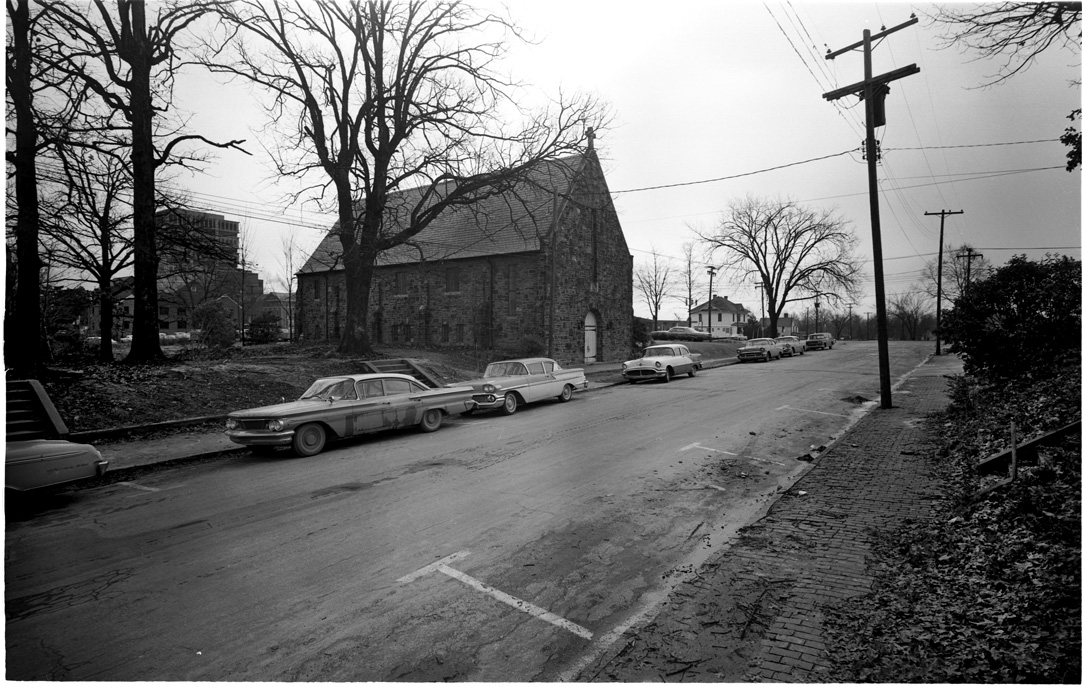 Yates Avenue ran between West Chapel Hill St. and West Pettigrew St. - one of the core north-south streets of the West End - a neighborhood whose early residential core seems to have been concentrated along the Burch Avenue east-west axis between Yates and Milton (later renamed Buchanan.)

The most prominent structure in the 500 block of Yates Ave. was the St. Paul's Lutheran Church - a congregation formed in 1923 that built a stone sanctuary in 1929 near West Chapel Hill St. The church was built by Northup & O'Brien Architects. 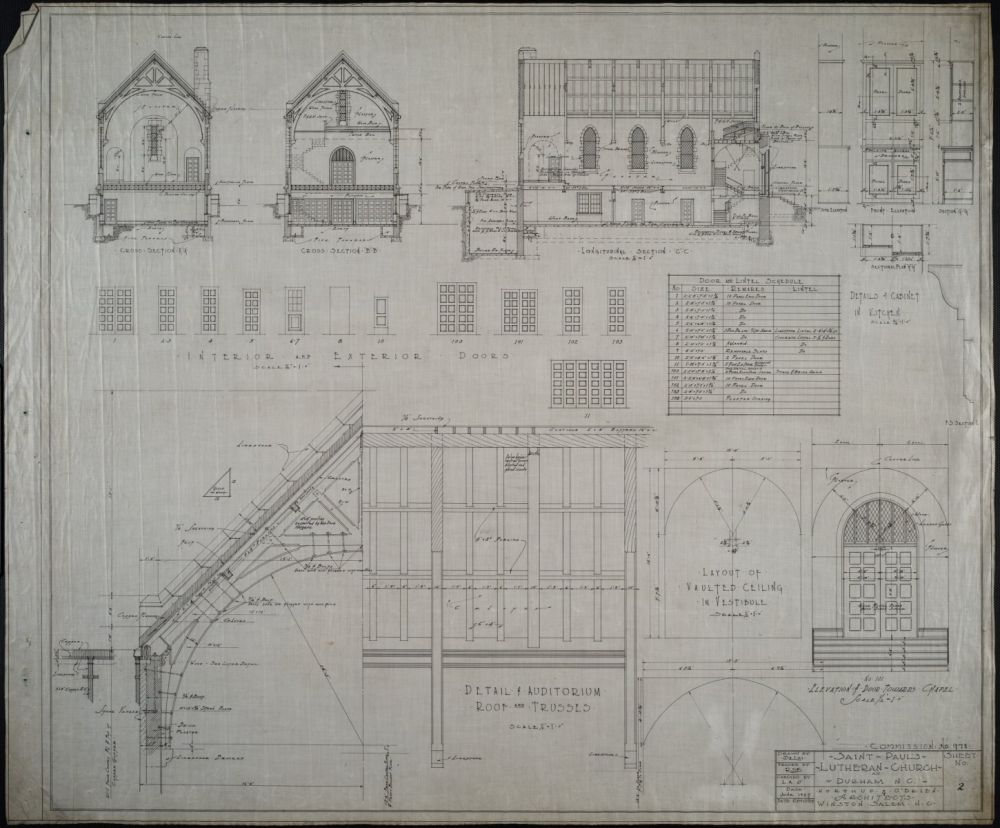 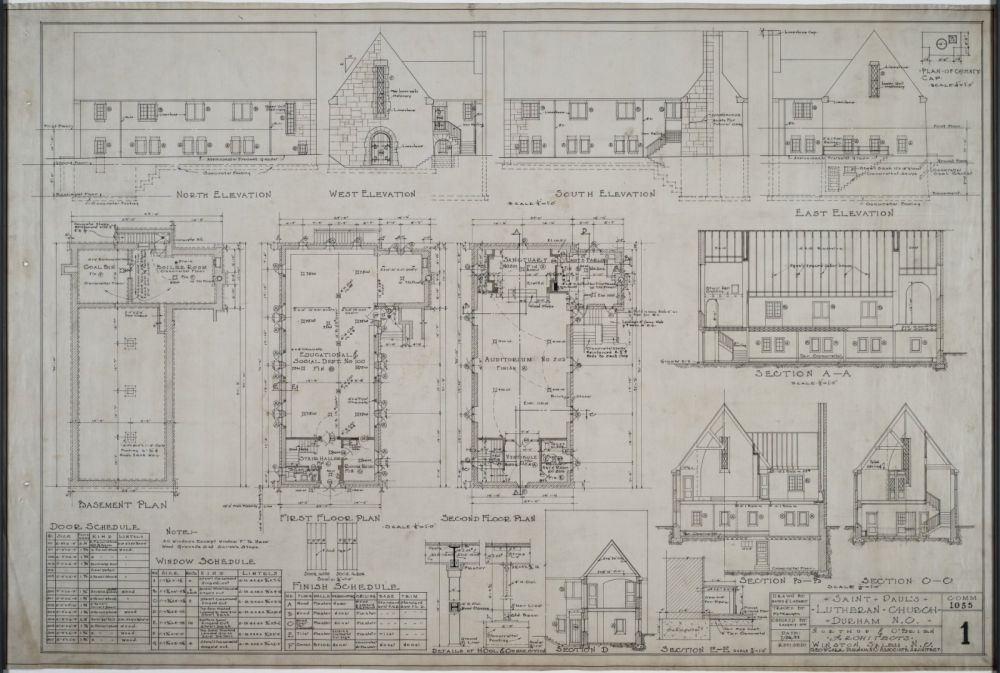 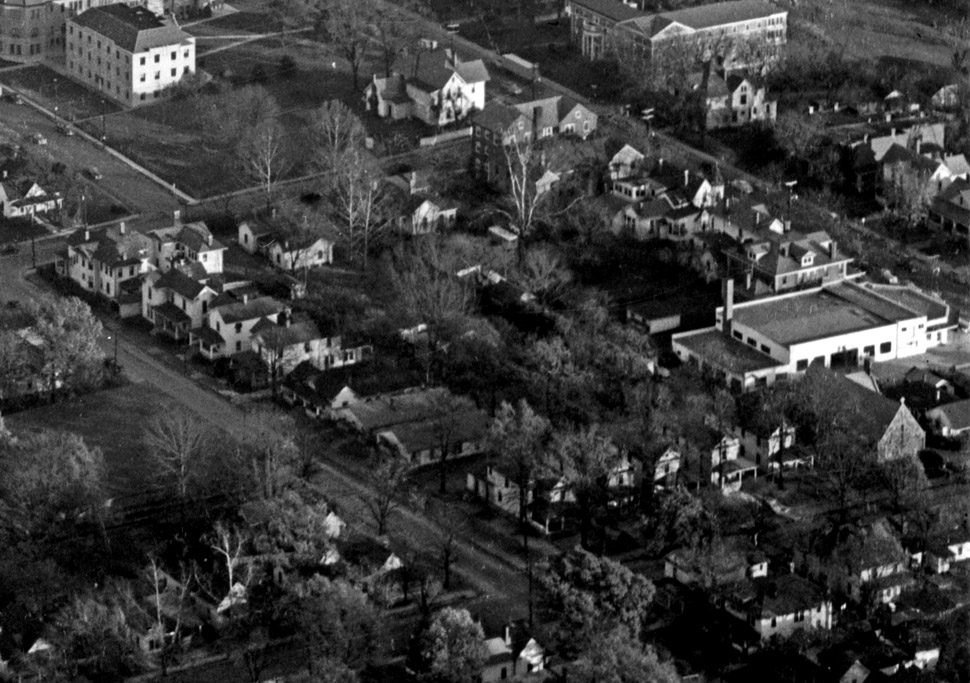 Looking southeast, 1948. The intersection in the foreground is Yates Avenue and Burch Avenue. The stone church visible towards the right edge of the frame is St. Paul's Lutheran, and that block is the 500 block of Yates. Other structures visible in the background include The Eloise, the YWCA, and part of Duke Memorial Methodist before its addition was constructed at Gregson and West Chapel HIll.
(Courtesy Herald-Sun)

This block and the core of the neighborhood were demolished in 1967 for the Durham Freeway. Although the Freeway did not extend north of Chapel Hill St. for a number of years after this, these structures were demolished for the exit ramp for westbound traffic. (I'm not sure what year the freeway was extended to Erwin Road, which is where it ended in the mid 1980s, and stayed until the mid 1990s when it was extended to 15-501.)

Looking southeast from the 500 block of Yates Ave. towards West Chapel Hill St., January 5, 1967. St. Paul's Lutheran is the only structure that hasn't been demolished. The NC Mutual Building is visible in the background, and the white house in the distance is 607 Vickers

This piece of landscape has been fairly well obliterated.

There is a tiny part of Yates Avenue which remains, actually, which I profiled awhile ago; it has been renamed Conyers, and still has one house on it (the billboard base sits in their yard.)

There is so much unused land in the doughnut hole of the West Chapel Hill St. exit ramp - it's an unbelievable shame that it's not turned into a park, or developed or similar. Several people have mentioned the chunk of rock in the center - it shows how many people notice the little details of their environment. 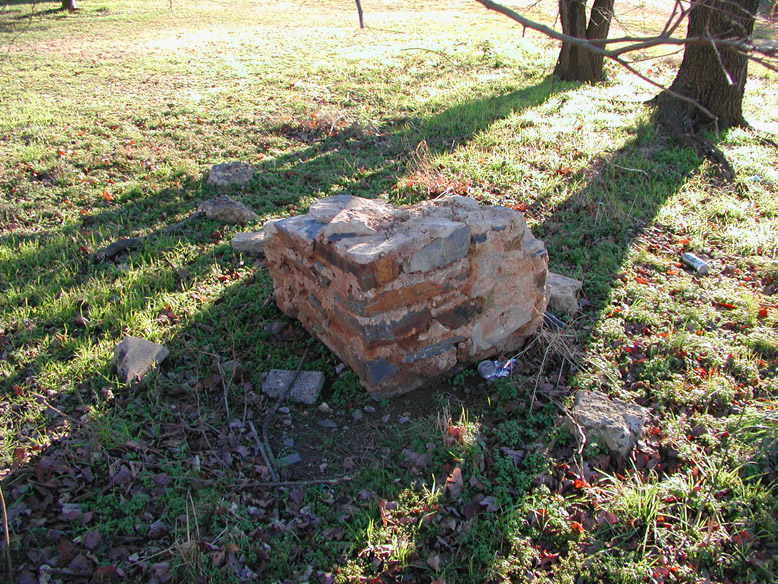 So what is this? Well, I don't think it started out at this location - it appears to sit on the top of the ground, rather than being embedded. Where did it come from? Good question - it's certainly tempting to think that it was associated with the church, but it doesn't really look like it's been there for 40 years. I've wondered whether it was buried - as a piece of foundation or similar (the masonry work is pretty rough) and unearthed during some construction. I don't know - but it's a good mystery if someone has some insight.

It could be a foundation

It could be a foundation pier.

yeah, I was thinking the same

yeah, I was thinking the same - notice the definite "clay hue" of the artifact.

with all the random cinderblock bits around it, it was probably leftover demolition rubble, tossed around and migrated a bit, but remained in state - like those tiny islands of detritus in major intersections that no vehicle ever touches.

Obviously venturing back in

Obviously venturing back in old postings...This conglomerate of stone appears to be the Hillsborough bluestone used in the construction of Duke University. So it could be remnants of the stone used to build the university, circa 1930. It could be from one of the dismantled Duke houses, buildings, or a project of a Duke University construction worker.

My wife and I got married in

My wife and I got married in this Church in 1957.   Her family were members.  Still looks as good as it did then, and our marriage is still as good as it was on that day.

NORMAN - glad to hear the

NORMAN - glad to hear the marriage is still strong, because the building definitely doesn't look good; it was demolished in 1967.