1111
Iredell Street
Durham
NC
Year built
1922
Architectural style
Craftsman bungalow
Local historic district
Watts-Hillandale
National Register
Watts-Hillandale
Neighborhood
Watts-Hillandale
Building Type
Residential
Can you help?
You don't need to know everything, but do you know the architect?
Log in or register and you can edit this. 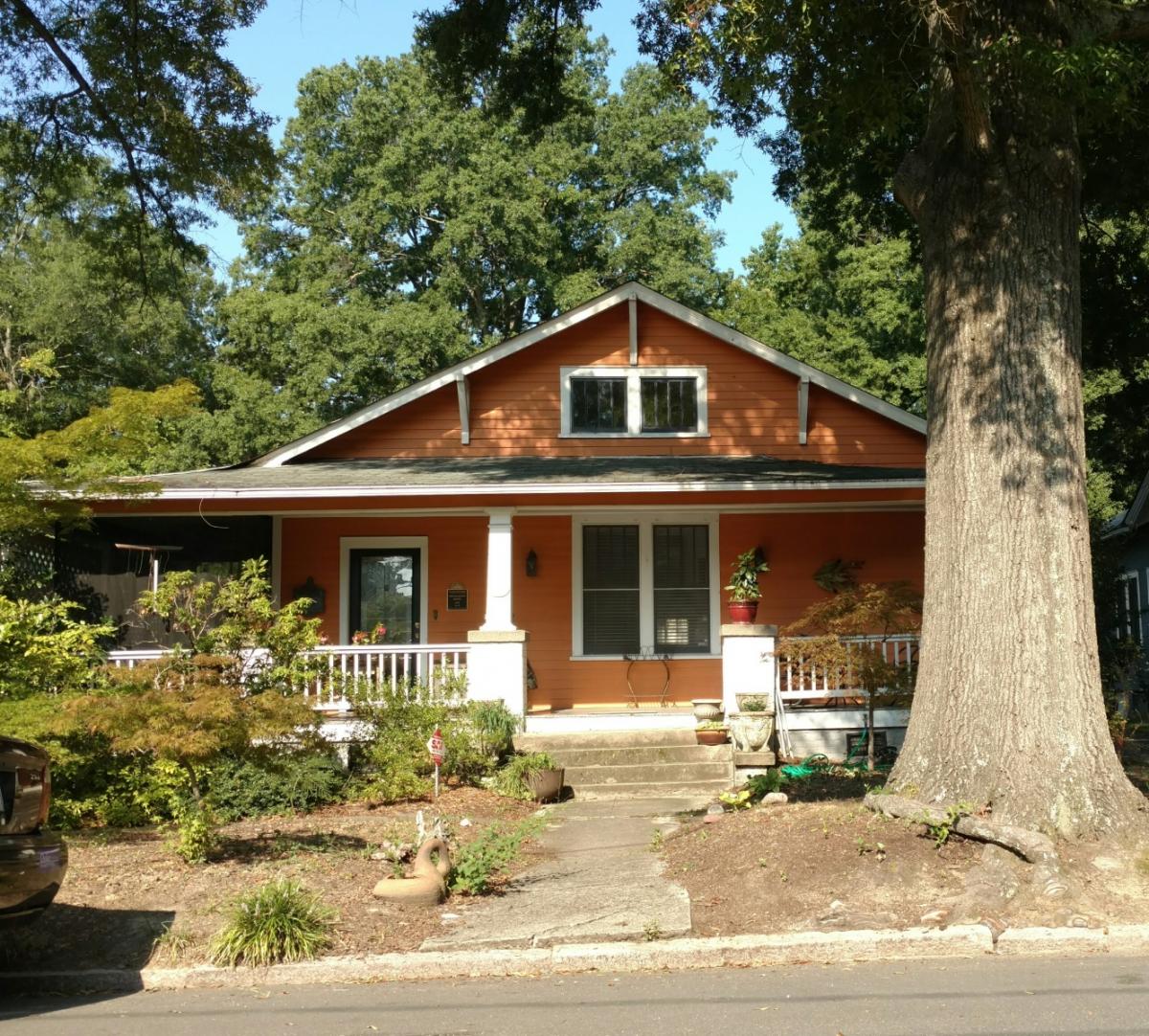 From the time of its building in 1922, the house at 1111 Iredell Street has had four principal owner-resident families or individuals.The house was built by J. C. Kluttz, a builder-speculator active in the new west Durham subdivisions at the time. Kluttz bought a number of lots in the neighborhood during 1921 and 1922. Deed records, city directories, and similarity of construction indicate that Kluttz probably built the houses at 1113 and 1115 Iredell (then "8"Street”) also. Hill's Durham directories indicate that Andrew L. Dennis moved into the house in 1922-23. Kluttz conveyed the property to Dennis in 1924. The delay between Dennis's occupancy and the conveyance could indicate that Dennis purchased the house on an installment basis, a financing mechanism more common at the time than the three party deed-of-trust system prevailing today. At the about the same time, Kluttz also sold the house at 1113 to Andrew Dennis's brother, A. John Dennis.

The W. J. Dennis family (Andrew and John’s parents) opened Dennis’ Grocery at 1110 Broad Street to serve the new and growing part of town around Watts Hospital. The hospital provided jobs and the streetcar provided cheap transportation. Durham's professional classes were giving up their old Victorians downtown and were building modern homes in the latest styles along Club Boulevard.

W. J. Dennis, his wife and seven of their nine children moved into the large new house at 1018 Broad Street. The elder Dennis boys, Andrew and John, bought the new bungalows side-by-side (on Iredell, then 8th Street) just a block from the store where they both worked. Although they originally had no street numbers, Andrew Dennis's house soon became 1111 and John's house became 1113 8th Street. The Dennis houses are the second and third of a row of four front gabled bungalows.

While each of these houses presents a different façade to the street and the interior arrangement of their rooms varies, they are functionally very similar. In each, the front door opens directly into a living room, the central feature of which is a hearth. Down one side ranges a dining room, kitchen and pantry, while down the other are two bedrooms and a single bath. This, essentially, is the modern American house, and it has no direct, easily identifiable European antecedents. It was also affordable. In 1921, a house like 1111 8th Street cost less than $2,000 to build. These homes marked the beginning of the "American Dream" and its desirability and functionality have not significantly diminished in 100 years.

The bungalow, which dominated American residential design during the boom years of 1915 to 1935, has many subtypes. The Dennis-Stout house is in the Craftsman style and displays the principal elements of its type. The exterior has been little altered over the years. The overhanging roof at the gable is supported by knee braces and along the sides, the eaves are open and the rafter tails are exposed. The windows are grouped in pairs and the lights are arranged with four vertical panes over a single pane in the lower sash. This is very common in area bungalows built before 1925. The porch is not engaged into the main structure and its shallow roof is supported by truncated pyramidal pylons resting on brick piers-also a standard Craftsman feature. The porch is remarkable for the extremely long spans between the supports. Central porch steps rise to meet, not the front door, which is positioned to the left, but to a central double window.

Andrew Dennis married Fannie Overby and for a time they made 1111 8th their home. Andrew became president of the family grocery business and Fannie became its vice president. Andrew's brother and nextdoor neighbor, John, left the grocery store and opened the Broad Street Filling Station at 737 Broad. John Dennis continued to live at 1113 8th into the 1950s, but Andrew and Fannie left 8th Street in 1931. They resided in several homes in the neighborhood. Andrew Dennis died in 1938 at age 41. His obituary described the cause of his death as "a complication of diseases."

In 1930, Andrew Dennis and his wife sold the house to the second of its principal owner-residents, William W. Stout, and his wife, Beulah Suitt Stout. Stout was a motor wagon salesman for Standard Oil. The Stout family lived at 1111 until the 1960s. Their son, William, Jr., was killed on June 7, 1944, serving in his country's armed forces during World War II. He was 25 years old. He is buried beside his parents in Maplewood Cemetery.

The property was inherited by collateral relatives who, in 1964 conveyed the property to Andrew Dennis's brother, A. John Dennis, and his wife, Mary G. Dennis. The Dennises owned the property only long enough to sell it to its third owner-occupant, Elizabeth McCauley Sykes, a widow. Mrs. Sykes died in 1995 and is buried in the Mount Hebron Baptist Church Cemetery in Orange County (see Orange County Cemeteries, cemeterycensus.com).

On the interior, the house retains its original functionality, but the current owner has modified the house to make it her own. The living room ceiling has been raised into the attic and a skylight to the south floods the room with light. The entry area, once part of the living room itself has now been set off by the introduction of a colonnade. A second door from the living room to the porch (once located to the right of the central double window as you face the front of the house from the exterior) has been eliminated.

And now, a final note about street names. For the purposes of this story we have called the street by its original name, "8th Street." The numbered and lettered street system for this part of Durham was originally laid out by the Durham Consolidated Land and Improvement Company in 1890. Under this system, Broad was originally 7th street and Club was E Street (although further east it was called North Road). Julian Carr and Richard Wright created the Consolidated with other investors to develop an industrial village surrounding a couple of mill sites in the center of what is now the Walltown neighborhood. The original industrial concept was never realized and the property was developed primarily as residential lots. Over the years, the numbered and lettered streets were renamed. Seventh became Broad by 1905 and E Street west of Broad became Club Boulevard in 1912 when the new Durham Country Club was built at its westernmost end. Eighth Street became Iredell Street in 1960. Today, only Ninth Street and F Street retain their original names. There is also a Fifteenth Street, but it was created later and not as part of Consolidated's project.

I am the great-nephew of Beulah Suitt Stout. My mother, Norma Rigsbee McMullan, spent a lot of her childhood years at 1111 Iredell. I vaguely remember going to visit Aunt Beulah and her sister, Aunt Ila, at the house in the early ‘60s. In fact, I broke my arm there when I was two, standing up in a rocking chair and it turning over on me. A few years ago, my spouse Bob and I were asked to be docents on the Preservation Durham Home Tour. We were assigned a house on Iredell – turns out, it was 1111 Iredell.  The Preservation Durham folks asked me about the colonnade in the front room before the tour so I asked my mother and her sister, Jackie Rigsbee Smith. They both remembered the colonnade being there when they were growing up. Last year, Bob and I found and purchased the house of our dreams – at 1101 Iredell! I guess things have come around full circle.