119
West Lynch Street
Durham
NC
Architectural style
Bungalow
Craftsman
Construction type
Frame
National Register
North Durham – Duke Park
Neighborhood
Old North Durham
Use
Residence
Building Type
Residential
Can you help?
You don't need to know everything, but do you know the year it was built?
Log in or register and you can edit this. 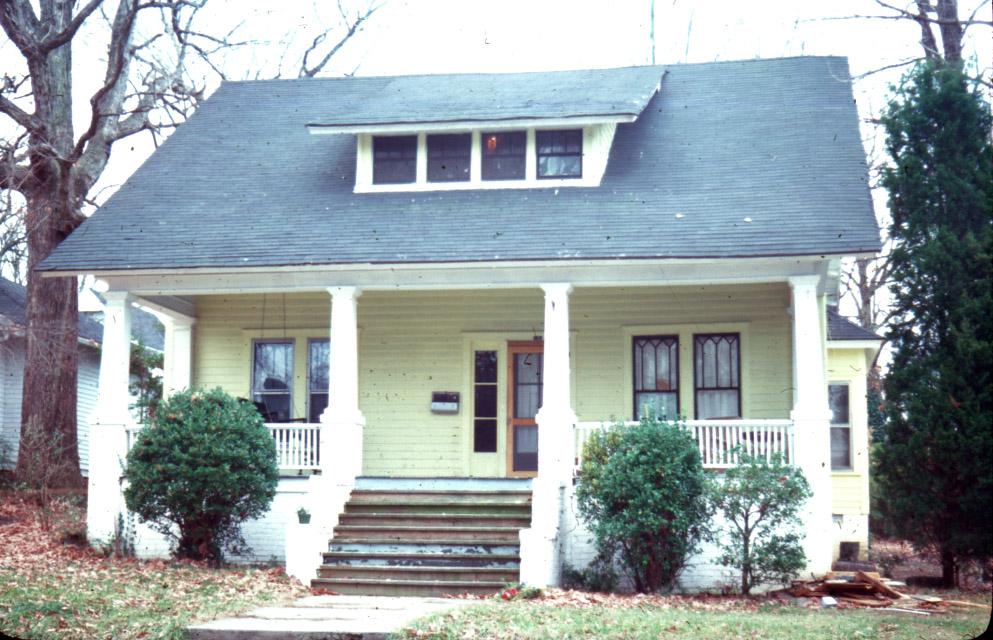 Attorney Jesse A. Giles purchased the eastern portions of lots 1, 2, and 3 of block 35 from the Duke Land and Improvement Company in 1916. Judging from the leap in cost, from “$100 plus other valuable considerations” that Giles paid in 1916 to $3350 that G. Frank Warner paid for the property in early 1917, it is most likely that the house at 119 West Lynch Street was built on Giles’ land in 1916. Giles never lived at the address, but Durham City Directories list Warner at the address in 1917. A “Map Showing the Changes in Block No, 35 of the Duke Land and Improvement Company, Durham N.C.,” dated November 2, 1922, shows an outline of the house, providing the earliest mapped record of its existence.

The National Register of Historic Places Inventory Nomination Form for North Durham-Duke Park describes the house as follows: "Ca. 1920. Attractive one and one half story clapboarded bungalow with steeply pitched side facing gable roof which runs over front porch. Porch roof supported by four wood on brick pier columns. Large shed roof dormer in front. Brackets on eaves on huge side gables." The deep angle of the roof distinguishes the house from most other bungalows in the neighborhood. The house retains four original coal fireplaces; one still retains its original handmade tiles.

Durham City Directories list an address for G. Frank Warner for the first time in 1917, when he purchased and moved into the house at 119 West Lynch Street. Warner was general secretary for the Durham YMCA and the Durham Rotary Club. Warner, his wife Mabel, and their son G. Frank Warner, Jr., remained at 119 West Lynch Street until late 1925 or early 1926, when they moved to Durham’s Forest Hills neighborhood.

Though G. Frank Warner, Jr., (hereafter Frank Warner) also made the YMCA his professional career, he is far better known as one of the leaders in the folk-music revival that took place in the United States following World War II. A guitarist, singer, and banjoist, Frank Warner and his wife Anne Locher Warner eventually collected thousands of folk songs from musicians in rural areas in the South, New England, and down the eastern seaboard. Probably the most famous of these songs was Frank Proffitt’s “Tom Dooley.” The Kingston Trio learned the song through Alan Lomax, who had learned it in turn from the Warners. The Trio made the song a national hit in the 1950s, and though it took many years, Frank and Anne were instrumental in making sure that Proffitt finally received credit for the song. Another now-famous song collected and recorded by the Warners was Sue Thomas’s “He’s Got the Whole World in His Hands.”

Frank Warner’s career as a folk musician began in Durham while he resided at 119 West Lynch Street. Of his time as a Duke student (1921-1925), Warner explained, “while I was in college I was active in music. I was in the glee club, and some of us were used by our English professor, Dr. Frank C. Brown, to illustrate his lectures on the folk music of North Carolina. I learned then many of the songs he had collected” (Baggelaar and Milton). Warner made his first public solo appearance at the 1924 State Fair in Raleigh, illustrating a lecture by folklorist Brown.

The Mabel and G. Frank Warner House became a local historic landmark in 2004.