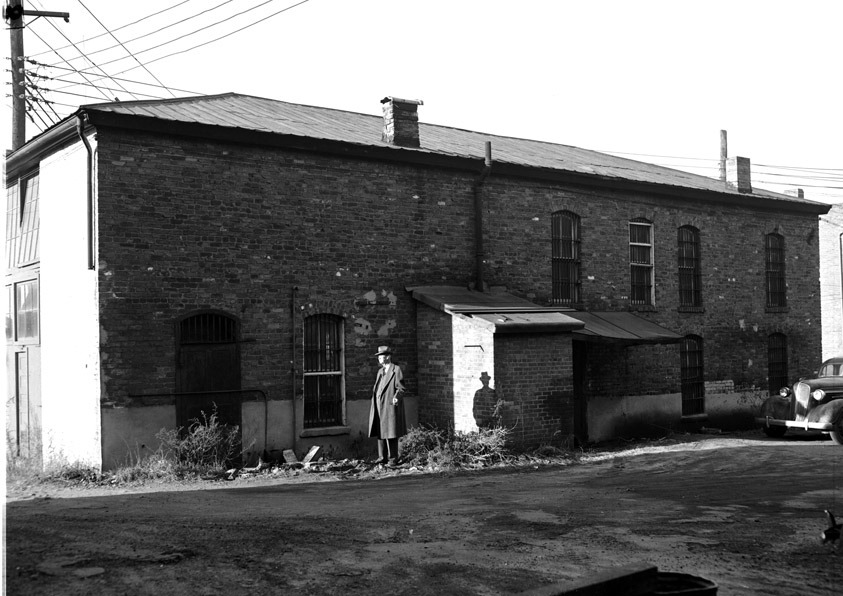 Old Jail, looking south-southeast from behind the buildings in the 100 block of East Main Street.
(Courtesy The Herald-Sun) 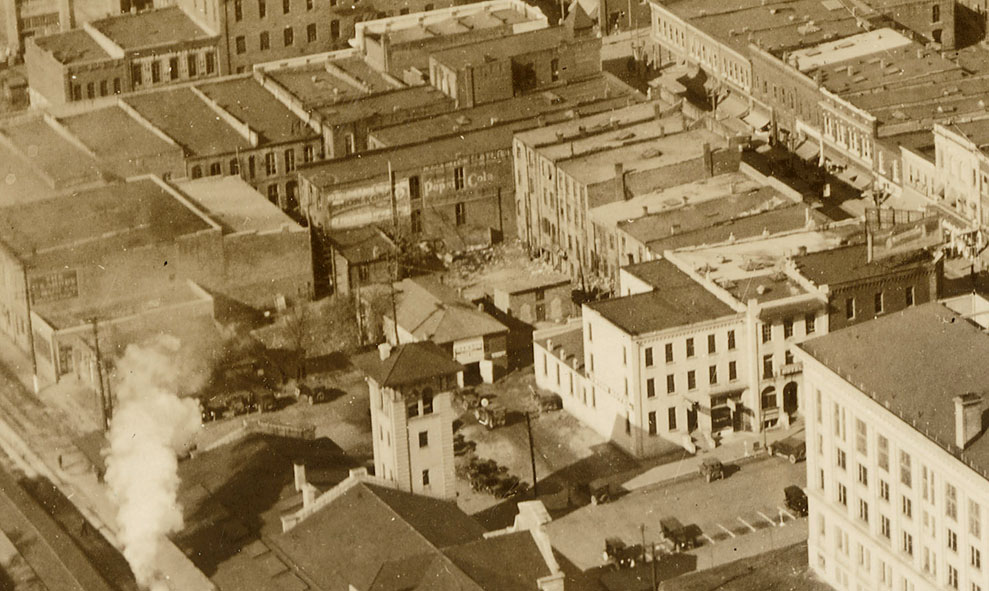 Not the original jail, this jail was built in 1916 out of materials reused from the original jail - which stood just to the south of the first Durham County courthouse. Per George Lougee, this structure was only used briefly before the prisoners and jail were relocated on the top floor of the new courthouse.

The building was being used as an auto repair shop by the 1930s.

Jail, looking south-southeast from behind the buildings in the 100 block of East Main Street.
(Courtesy The Herald-Sun) 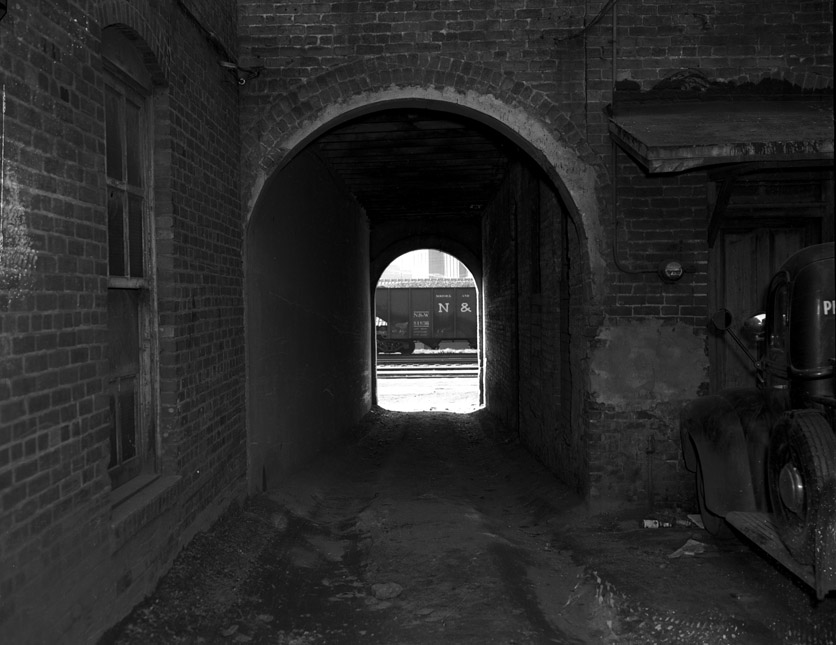 Entryway into the jail.
(Courtesy The Herald-Sun) 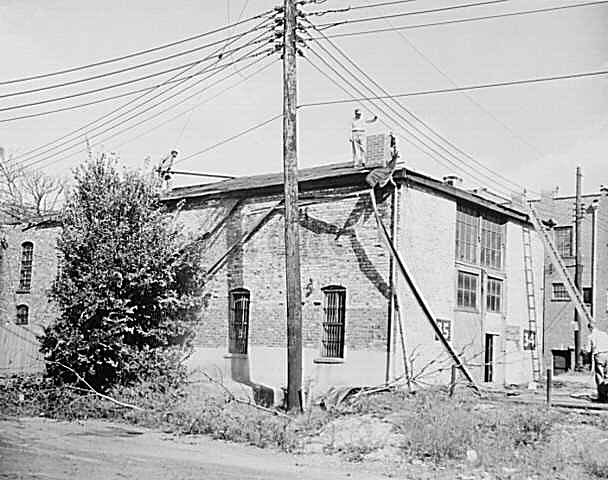 The South Church St. buildings were torn down somewhere along the way - although photos of this block are so relatively non-existent, I'm not sure when. By 1965, the structures are gone, along with the Young Men's / Young Boy's Shop buildings. The jail is still partly visible at the left edge of the frame. 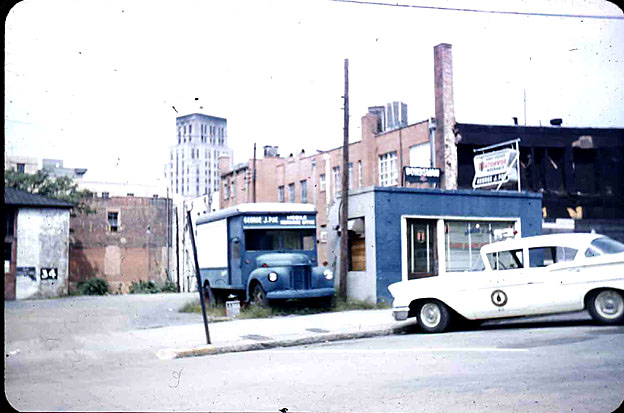 After the teardown of Union Station, the new Church St. parking deck took over the real estate formerly occupied by the Church St. buildings and the jail. 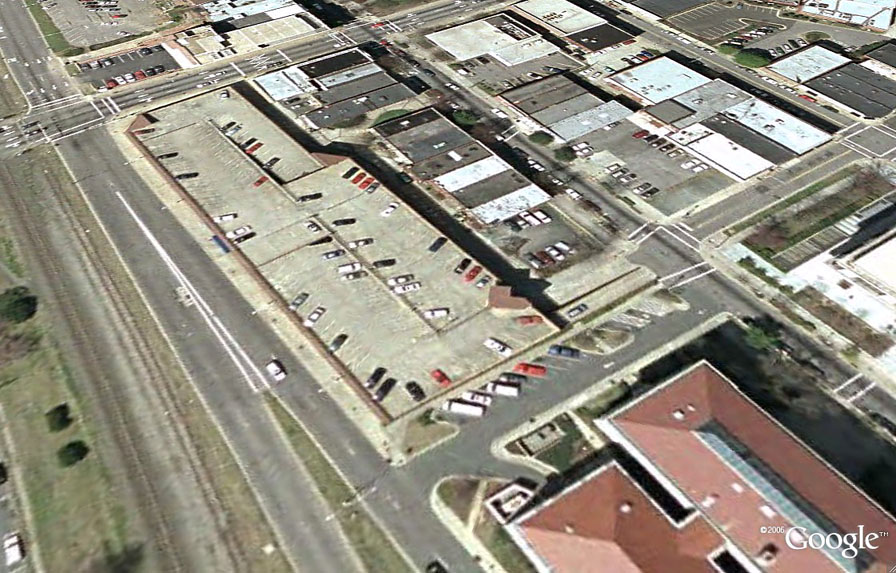 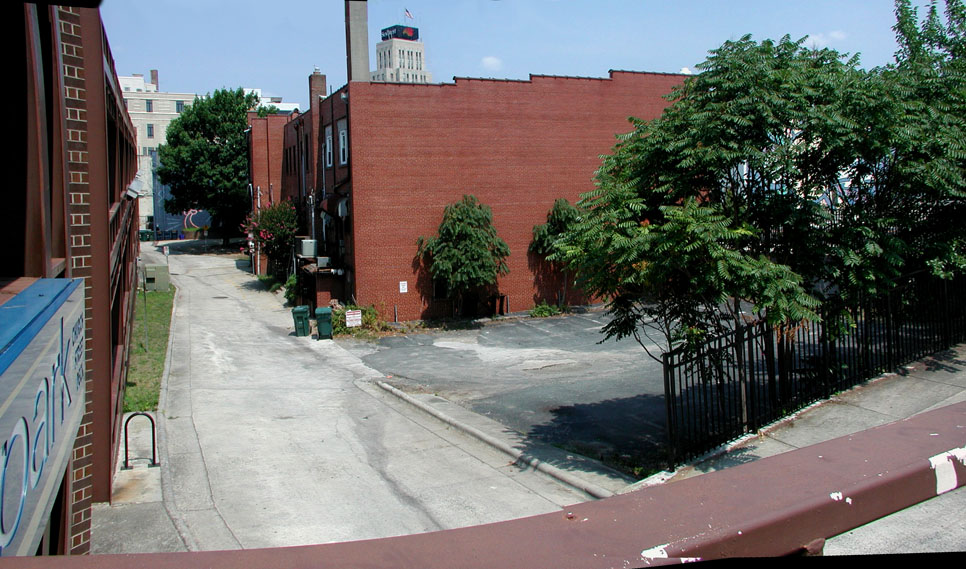 Would love to see more photos of the old jail..Where could we find them IF there may be anymore. ?

Thank you Curtis - without

Thank you Curtis - without your valuable insight and information, that could not occur. When the new site launches later this month, you'll be able to both write your own posts and (hopefully, we're still working on getting this to work,) make your own corrections/additions. (Both with editorial oversight.) What you've articulated is exactly my goal, and my sense that, while I dearly love books, they are not the record of the future for creating a deeply interwoven and (ideally) comprehensive archive of place - which changes so very rapidly. GK

Let me say again how

Let me say again how much I love this site. I had never seen your Union Station posting before. I vividly remember George Pyne desperately trying to convince people to save the depot, and I remember waiting for the train there on a number of occasions in the 1950's. I would board the train for Burlington where my great aunt, Nellie Hudson McDade, would be waiting for me. 'Nannie,' as we called her was the wife of a prominent Burlington physician, big game hunter and orchid collector; and she was born in Leigh House, the home of her grandfather, Richard Stanford Leigh about whom you posted last month. Nannie's daughter, granddaughter, and great-granddaughter will be visiting the Leigh Farm Park with me on Labor Day. BUT, the reason for this comment is the picture of the interior of Union Station. When the building was razed, my dad salvaged one of the waiting benches. It is shorter than those pictured and is not double sided, but it is identical in every other way. For nearly forty years it has weathered on the front porch of Patterson's Mill Store, but now my wife and I think it needs a new home in the new depot and we'll be working toward that end. See what you've inspired! One of the many strengths of this site is that it is so fluid. People can comment, make corrections, add new information. That is so important. Earlier this year, I bought a new book about a local area dear to my heart, but the book is so packed with error as to be slightly criminal. Now all that erroneous data will be cited for years on end. The internet is just as bad. Years ago some reporter claimed that my mother was the first female pharmacist in North Carolina, even though UNC was graduating female pharmacists as early as 1916, seven years before my mother was born. The other day I saw a new internet posting repeating the old incorrect claim again, but, even worse, that same day I found another internet posting claiming that my mother was eyewitness to the funeral of Benjamin Randolph in Columbia, SC, in 1868. Mom, who is asleep in the next room, found that very amusing. A group of letters in the Elsie H. Booker Collection at UNC offer eyewitness accounts of the funeral, but Mom didn't write them; she collected them. The problem is that I can't correct the book or the website. Thank you for offering something very different.

Curtis Thanks for this -

Curtis Thanks for this - you are correct that this jail did not exist when Hodges and Jones were hanged - my error. In looking at the 1913 Sanborn maps, I see that the jail was located directly south of the first courthouse, between Union Station and the courthouse. In fact, you can see the jail (which resembles this structure) in the postcard at the top of my Union Station post here Thank you! GK

Hi, Gary, I ran across

Hi, Gary, I ran across my copy of George Lougee's Durham, My Hometown this afternoon and came upon Lougee's account of the old jail. He writes that the jail pictured in this posting was built in 1916 from salvaged materials from the OLDER jail. The original jail, in which John Hodges and Freeman Jones were hanged in 1907, was razed for the site of the courthouse, built in 1916. He further relates that the jail pictured here was used for that purpose only one year, indicating that it was a temporary usage lasting only until the top floor of the new courthouse was ready for prisoners. Lougee's source of this information was Sheriff E. G. 'Cat' Belvin, who is pictured in one of your photos standing in front of the jail. The county used the building for storage for many years. It was apparently gutted about 1917 or 1918 and the iron cells used in the Granville County Jail in Oxford.