One of my favorite recently-solved mysteries involves the location of the Southern Conservatory of Music once it left the southwest corner of Duke St. and West Main St. in 1924.

I knew the SCM had moved to "Alston Avenue" - but I could not figure out where. This picture from the 1920s shows their 'new' building on Alston. 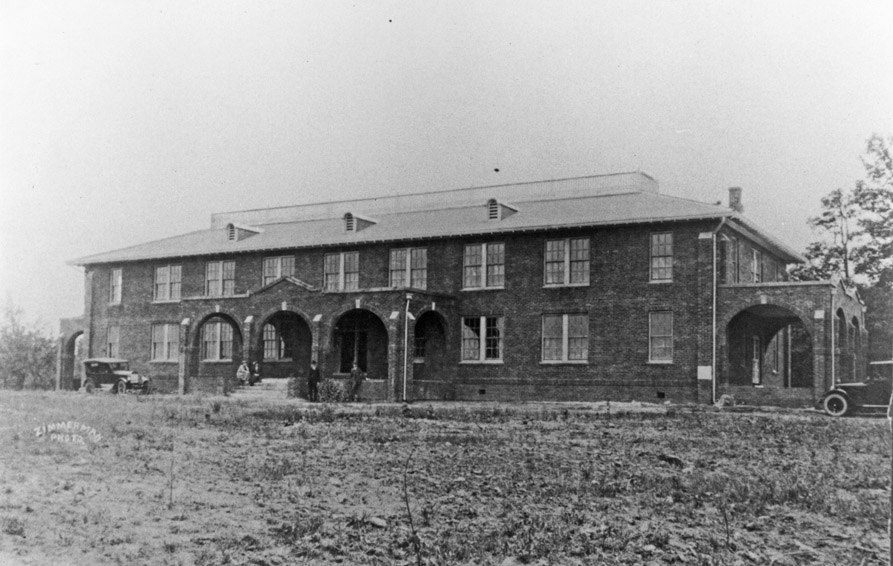 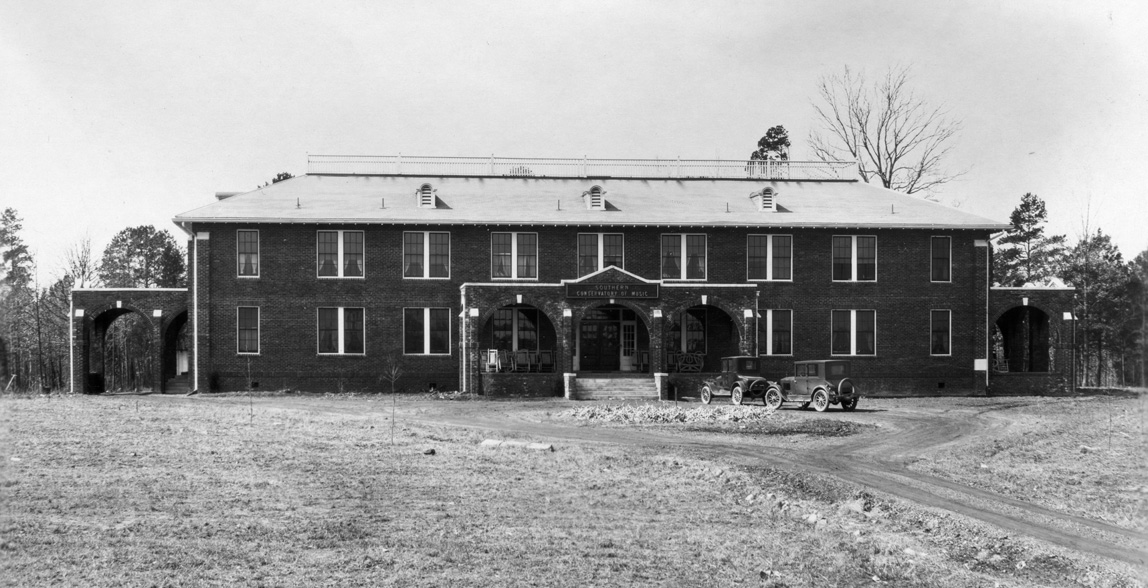 I could not find the location of this building for the life of me. I searched old Sanborn maps, old aerial photographs, old city directories (which merely would say "Alston Ave." or "Alston Avenue Rd." as the address) and even the catalogs and yearbooks of the SCM from the 1920s. All this provided me were some candid shots of young women on the porch, and a proud assertion that the school was "situated on 18 acres." 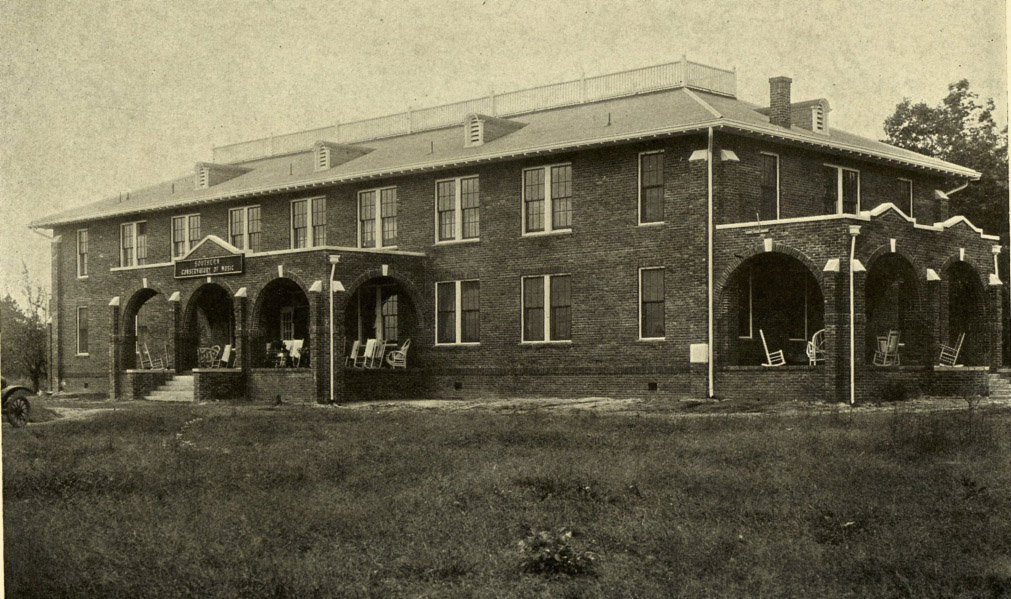 One problem was that the SCM had a very short lifespan on Alston Ave. - ~1924 to 1928. This made it especially difficult to tap certain sources of information.

I asked Jim Wise for help - who suggested that I speak with Audrey Evans, former librarian. Audrey responded immediately that she knew where this was. And furthermore - the building was still there!

It turned out that my failure was one of geographic imagination. I had continued to search Alston Avenue on the east side of town, presuming that the SCM wouldn't be located terribly far from downtown. In actuality, it was located way out of town - near Riddle Road.

I simply couldn't understand how I could have missed this building, having driven that way many times before. So I drove out with my camera and slowly drove the section of Alston just north of Riddle Rd. And there it was, past a parting in the trees.

I can't describe how amazing this was - since I had presumed for such a long time that the building had been torn down, it was as if it had been resurrected, and I had the chance to see one of the long-lost buildings that I chronically catalog.

The building evidently became a Salvation Army building, and later a "home for unwed mothers" during the 1960s. Since the 1980s, it seems to have been some sort of Shriner's temple (ZAFA temple?) with a lot of not-very-friendly signs at the entry gate. (Actually a Prince Hall Masonic Lodge; see comments below.) This was as far as I wandered onto the property; I understood when I looked for it how I had missed it for so many years. You need to look directly past the gate when you pass to see it - set back from the road as it is.

Congrats on the discovery,

Congrats on the discovery, Gary--great story, and how rare to find out that a treasure is still extant!

From some quick Googling, it looks like the Zafa Temple is a Shriner/Masonic lodge of the "Ancient Egyptian Arabic Order Nobles Mystic Shrine of North and South America and Its Jurisdictions Inc., Prince Hall Affiliation," which is the African-American branch of Freemasonry.

They're mentioned in a history of a lodge from Charlotte, and there were apparently lodges in Fayetteville and Winston-Salem too.

Your determined pursuit of

Your determined pursuit of information is another reason why this blog is one of Durham's finest. I've driven/biked by this building many times and wondered...

From the photo, the structure appears to be in good condition; only the roof appears to have been changed, comparing it to the earlier photo.

You mean the big Sanborn

You mean the big Sanborn books with the overlays? Not the easiest thing to access if you have a full-time job, but they are available during business hours at the Durham County Library. Unfortunately, the Sanborn Map Co. has only digitized 1913 (and prior) and 1937. It probably wouldn't have helped, as I was perisitently looking in the wrong area.

The building seems in pretty good shape on the outside. Part of the front porch has been removed, one of the side porches enclosed, and the roof replaced (including the dormers.) I'd love to see inside sometime!

No... I was kidding, because

No... I was kidding, because I, too, seem to always try and find a location and it's just off the edge of the darn Sanborn map for the year/years I want (plus, as you know, there ain't no 1924-1928 Sanborn map for Durham!).

But I wasn't aware of "the big Sanborn books with the overlays," but they sound cool! I'll have to go check them out sometime.

I am a member of the Shrine

I am a member of the Shrine Temple which you have mentioned. As already mentioned, Zafa Temple #176 is affiliated with the Prince Hall masons in 9and around) Durham, NC. There are Prince Hall shrine temples (designated as AEAONMS) throughout North Carolina, the U.S. and the world (there are several temples in Europe and Asia).

If there is any info that you need I will be glad to put you in contact with someone from Zafa Temple who can answer your questions (or arrange a tour).
Normally I would offer such a tour to you myself but I am now living in San Antonio, TX...:)

Gary, Thank you so much for posting this blog. I stayed here during the early 1970's during the time that it was a "home for unwed mothers". This building has so much unknown history. I remember the inside as being fascinating even back then. The scariest was having to outside & go down to the "cellar" to do our laundry. Truly a memory!

I was also a "guest" !!NOT!! of the home for unwed mothers there in 1971..I don't have much memory of my time there..I am reunited with my daughter that was legally kidnapped from this building along with the help of my family, Durham DSS and The Salvation Army...the people at the time there were good to me but I have since learned the motive!! HOWEVER...seeing this building has sparked a few memories maybe someday I can travel there and take a tour...Sandra

Thanks so much for your work.

Thanks so much for your work. It's always fascinating to explore the Durham that used to be. Tonight I attended a wedding at the Zafa Temple and came home hungry for info on this building. This was the first place I looked. The folks at the Zafa Temple are really friendly and outgoing- you should have no problem getting a tour. I only got to see a tiny fraction of the building, but I would love to see more pictures if you visit.

As the present Potentate Of

As the present Potentate Of Zafa Temple #176. It would be my pleasure to give you a tour of our building. thanks for the interest in our building and the great old picture of it,
derekburgman@yahoo.com

My grandmother inherited the

My grandmother inherited the land this building sits on around 1920.  It was part of the Ellis Farm on Alston Ave. She used the proceeds to buy a house , a T-Model Ford, and splurged on a fox fur.  My mom and aunts use to chase each other with the fox.

The Bryant's moved from Duke Street (I think the Duke Memorial UMC area) to here to open the conservatory.  It was too far out of town. They lived out their remaining years in a house across Alston Ave. Ms Bryant supported herself by giving piano lessons to uninterested children.

It became a home for unwed mothers before the 1960's.... probably in the 1930's or 1940's.   I remember seeing the expectant mothers walking to the nearby community stores.

Another interesting house nearby is the Mann House.  It is two houses past Riddle Rd on the West side.  It was constructed ca 1900 by one of the funeral homes directors... perhaps Hall & Wynn.  Anyway, the wife refused to move that far out of town, so it was sold to the Mann's. It is now a B&B.

Nearly all the land in this area was farmland owned by the Cooks,  Ellis, and Y. E. Smith

To whom it may concern, my

To whom it may concern, my name is Noble Conrad Sligh, I am a member of Zafa Temple # 176, and the purpose of the no trespassing sign on the front gate is because it's private property and liability reasons. But we the Nobles of Zafa Temple are very friendly people of the community of Durham, and we welcome the few visitors which have stop by when somebody is there. So please feel free to setup a time for a visit and tour of the building and property. Just email me, and I will put you in touch with the Potentate for your visitation.

A little correction about when we bought the building and when we moved in the build. Because we have been in this build since the late 60's or the early 70's. This Saturday will be celebrating our 70th-year anniversary with a breakfast at 9 am and a party. But we 1st started off in the Hayti community on Pettigrew St. in 1947.