400-408
Morgan Street
Durham
NC
Neighborhood
Downtown West
Building Type
Commercial
Can you help?
You don't need to know everything, but do you know the year it was built?
Log in or register and you can edit this. 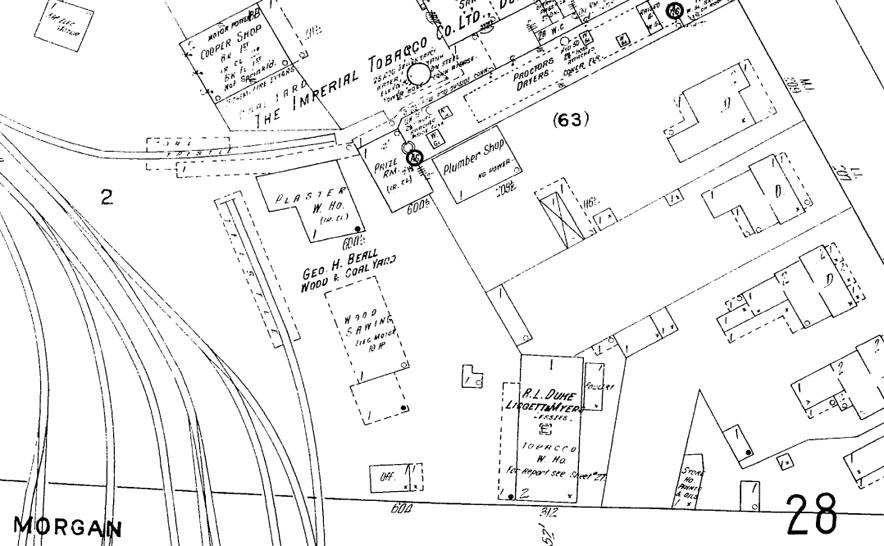 The Beall Wood and Coal Company, initially located on West Pettigrew Street, was established on Morgan Street adjacent to the Imperial Tobacco Company and the Norfolk Southern RR beltline between 1905 and 1907. Their business proposition was simple:

George Beall lived at 413 South Duke until ~1911, when he moved to a house on the corner of Morehead Ave. and Vickers Ave. 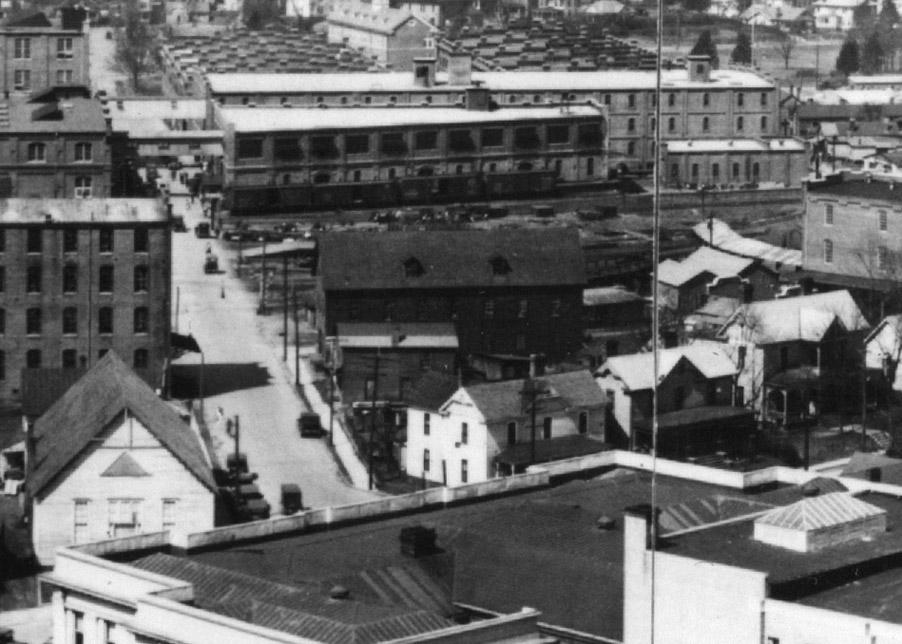 Looking west on Morgan St. from Morris, ~1926. The Beall Wood and Coal Co. is partly visible on the right, but mostly obscured by the 2+ story wood-frame Brodie L. Duke Tobacco Prizery #1.

By 1928, Beall's company was out of business and had been replaced by the Murdock Ice and Coal Company. Albert Allen Murdock (h. in 1950, 3310 Roxboro Rd.) had a previously successful Ice and Coal business on Ramseur St., called "City Ice and Coal." A new structure was built fronting on Morgan St. in 1928.

The company was run by AA Murdock's son, J. Allen Murdock until 1948, when he died. AA Murdock, the father, took over management of the business in 1950. 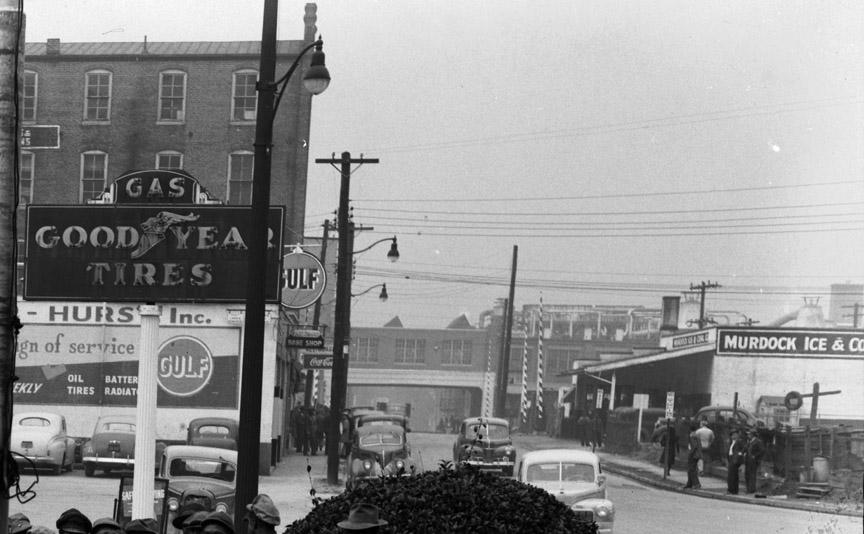 Looking west on Morgan from Morris, 02.16.48
(Courtesy The Herald-Sun Newspaper) 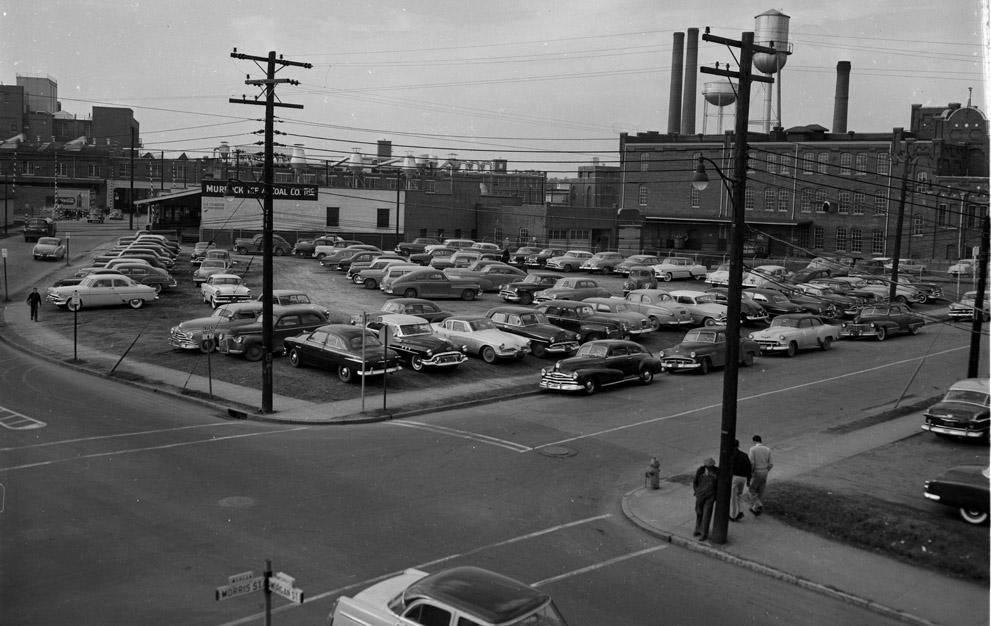 It isn't clear to me when the company went out of business, but ice and coal dealers weren't exactly in high demand after the mid 1950s. The building appears to have been demolished sometime between 1977 and 1994. 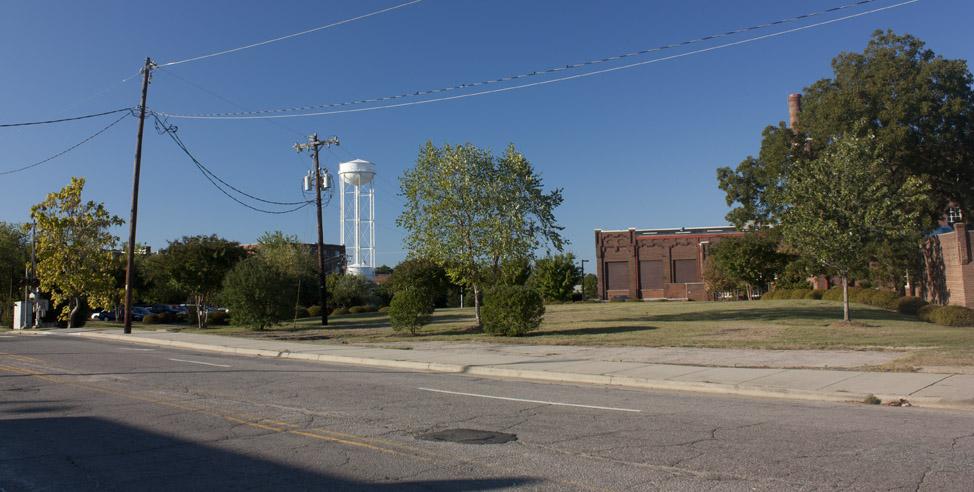 Any notion of whether or not this gentleman was related to the Valinda Beall Watts for whom the "Beall Pavilion" is named at Watts Hospital/NCSSM? FWIW, everyone at the school pronounces that name "Bell" -- didn't know if the two were related.

If I am not mistaken, I can remember going into the Murdock Ice House as a young teenager. This would have been around 1972. At the time they manufactured ice in large blocks. I never knew they were previously known as Murdock Ice and Coal.

In the photo titled "Looking west from Morris, mid 1950s", was the larger building on the right once occupied by DC May paint company?

Michael - I need to check to be certain, but I believe that the Beall family came from Baltimore, and George Beall may have been Valinda's brother.

I have not lived in Durham for many years, but I thought the face of the buidling looked familiar. I worked for DC May on their paint crews for a while in the late 1970's. Both of the May companies did contract painting throughout Durham and the surrounding counties. Churches were regular customers, as well.

It may have been a little earlier than 1972 that I went inside of Murdocks, but not much earlier.

As Anon stated, that building sold ice into the 70's. My Dad knew a guy who sold ice among other things, and I remember going there when I was 5-8 yrs old sometime in the mid 70's.

I have found out the owner at the time that I had went inside of the icehouse was Jessie Sykes. He ran it with his wife. I cannot confirm or remember what name the business used at that time.

It was my father, Jesse Sykes that ran that business and it was called Sykes Ice & Coal.