903.5-905.5
Angier Avenue
Durham
NC
Year built
1910-1940
Year demolished
1970-1979
Architectural style
Art Deco
Construction type
Masonry
Neighborhood
Edgemont
Use
Restaurant
Laundry
Building Type
Commercial
Can you help?
You don't need to know everything, but do you know the architect?
Log in or register and you can edit this. 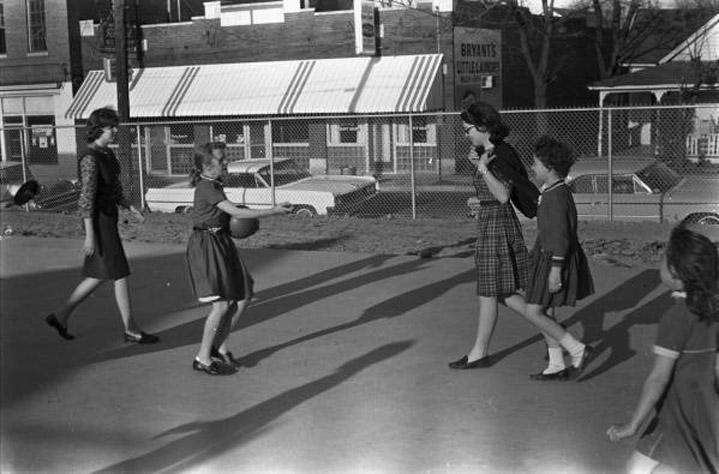 Hmmm... the Barnes collection says that the photos were taken in the 2800 block of Lawndale, between Golf Street and Hillsborough Road. This image: http://dc.lib.unc.edu/cdm4/item_viewer.php?CISOROOT=/barnes&CISOPTR=429…
shows a slightly different view.

The 1960s images don't seem to jibe with the housing style(s) that are at the intersection of Lawndale and Hillsborough, plus if you look in the background of the pic posted on ED, there appears to be somewhat of a hill with a structure on it. And, this photo: http://dc.lib.unc.edu/cdm4/item_viewer.php?CISOROOT=/barnes&CISOPTR=441… seems to show a possible smokestack or two in the background.

Note the radio/tv tower with guy wires in the background of this shot (over the volunteer's right shoulder) -- http://dc.lib.unc.edu/cdm4/item_viewer.php?CISOROOT=/barnes&CISOPTR=424…