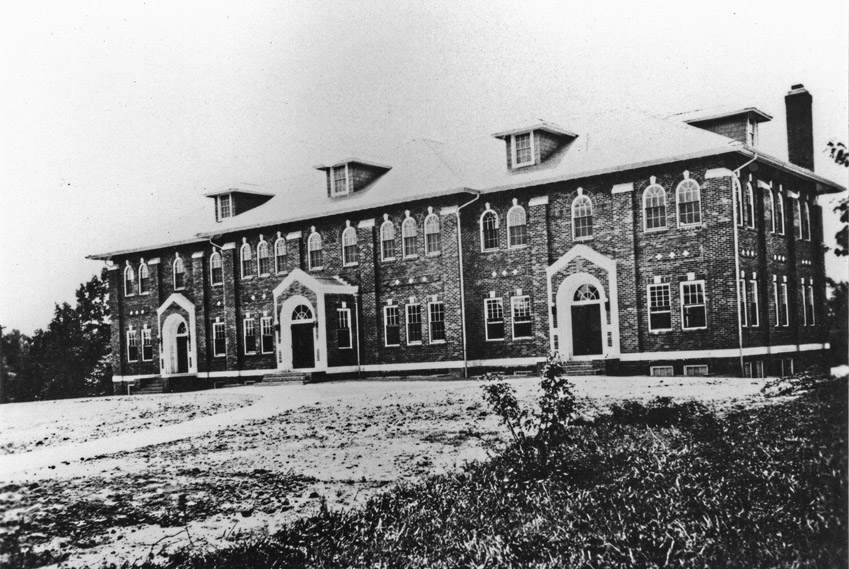 Built in 1922 by Erwin Cotton Mills, the Renaissance Revival, 2 1/2 story Erwin Auditorium was designed by Hill C. Linthicum to provide all-purpose recreational space for the community. The construction was not entirely benevolent, as William Erwin used money that would have otherwise been distributed to workers as bonuses to construct the building.

Nonetheless, it quickly became a beloved hub of social activity for West Durham, open from 8:30am to 10:30pm daily, except for Sundays. A 1000-person capacity two-story auditorium (in the rear of the building) hosted concerts, meetings, lectures, shows, plays, and twice-weekly movies. When the chairs were removed, it also served as a gymnasium where basketball games and other athletic activities were held. A swimming pool was located in the basement. The front of the building contained a library, a cafeteria, a baby clinic, a game room, a bowling alley, and a soda fountain. Classes were offered in the building as well, including crafts/arts/sewing/cooking classes as well as night school trade/professional classes that had been offered by Erwin Mills for a number of years. Community groups, such as scouts, would utilize the auditorium for meetings as well. Outdoors in the adjacent park, (extending to the east) there were tennis courts, playgrounds, and a zoo (which had, at least, a bear, an eagle, monkeys, goldfish, and squirrels.) Showers and changing rooms were located on the south side of Erwin Road (where Sam's Blue Light would later be located.)

Movies were a significant attraction at the Auditorium. Many residents saw their first 'talkies' at the Auditorium - children were admitted for 5 cents, and adults for 10. Zeb Stone noted in a 1975 oral history that movies would be originally be shown on Tuesday and Saturday, and that Thursday nights were later added to the schedule as well (other sources note that the third day added was Friday.) The fourth of July was evidently a major event for the community, celebrated in the Park and auditorium.

Residents of West Durham recalled in the same oral history the sense that what they had at the auditorium was a significant cut above what was available / provided by the city in other parts of Durham.

It appears that any program sponsored by the mill was likely to utilize the auditorium. Below, employees of Erwin Mills receive blankets from the company at Christmastime. 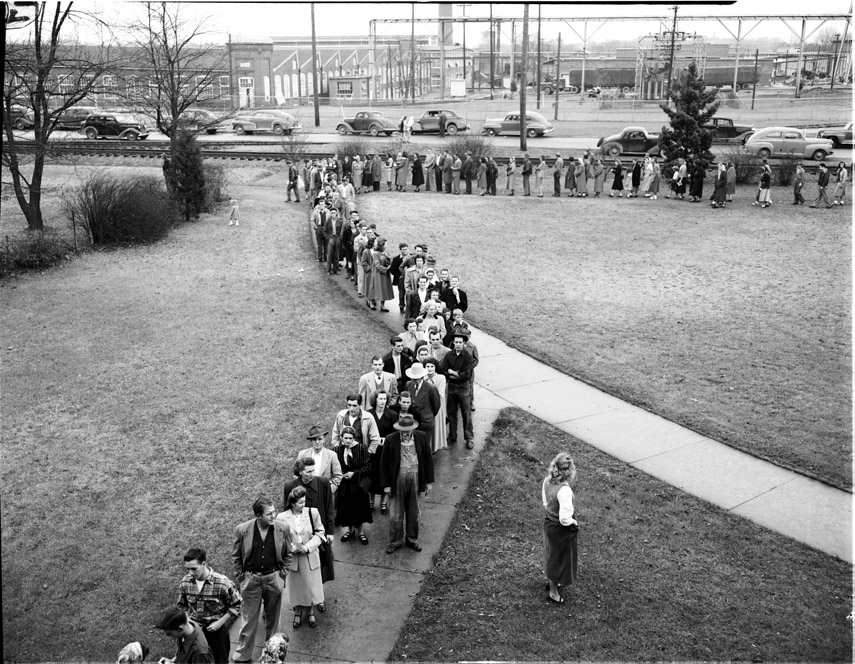 Looking northwest from the upper floors of the Erwin Auditorium towards Mill No. 4, 12.22.49. Employees are lined up from the entrance back to the railroad tracks (West Pettigrew was apparently closed between Oregon and Alexander when the Auditorium was built.)
(Courtesy The Herald-Sun Newspaper) 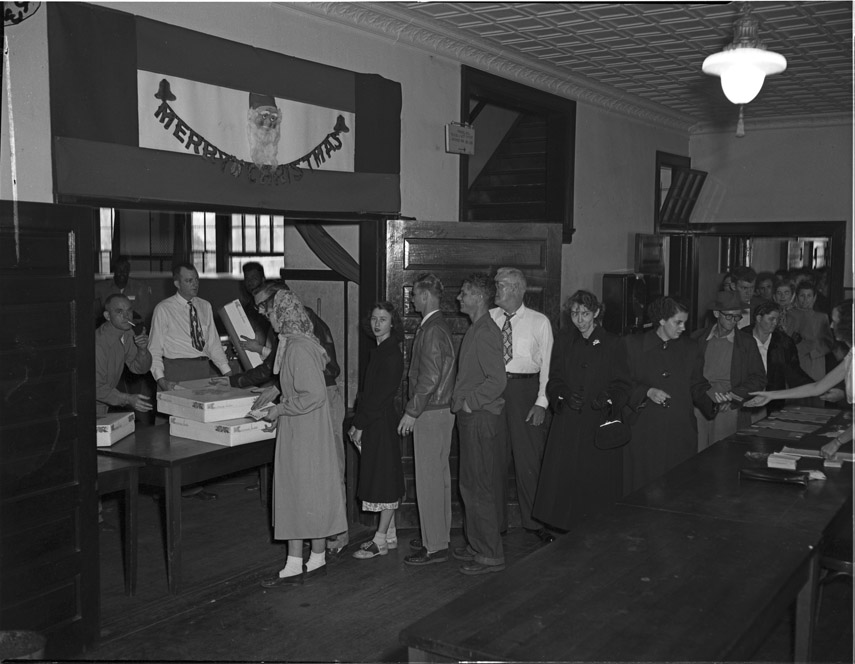 Even as control / ownership of Erwin Mills shifted in the 1950s, the auditorium remained a hub for social activity, classes and the like. 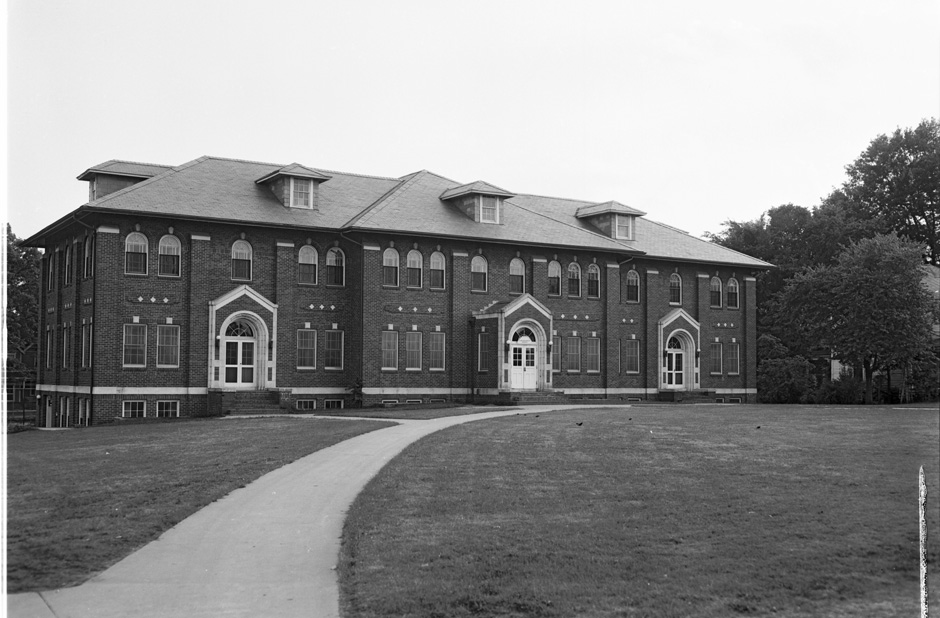 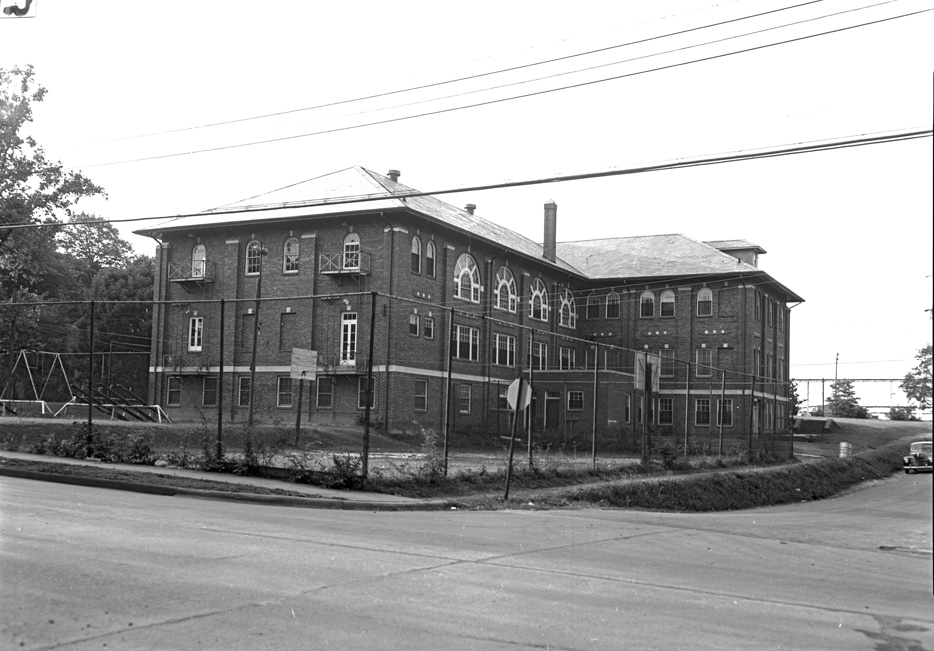 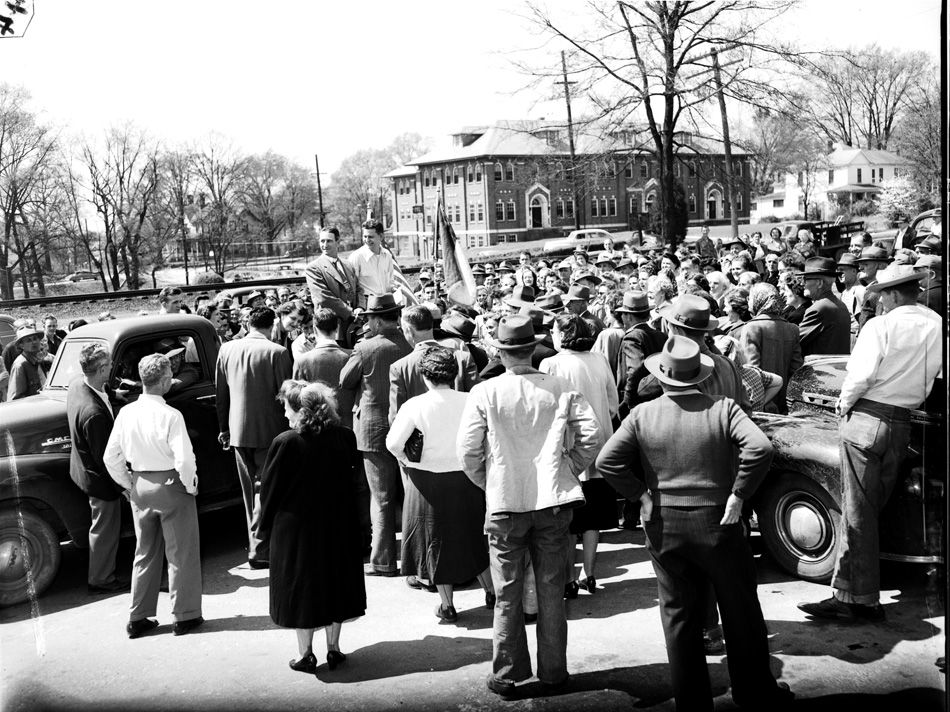 Erwin Auditorium in the background, looking south from Mulberry St. during the 1951 Erwin Mills Strike, 1951.
(Courtesy the Herald-Sun) 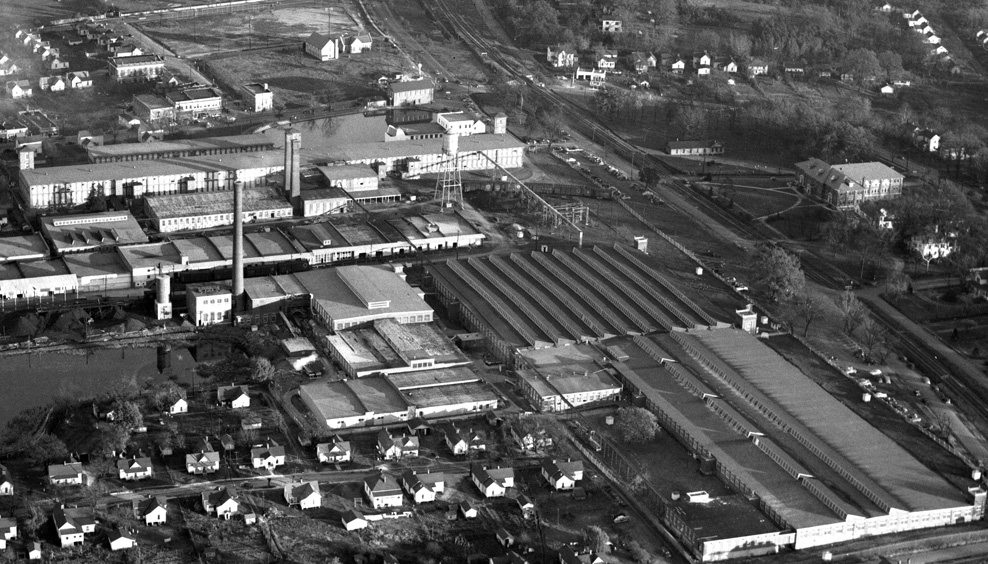 Aerial shot looking southeast over the Erwin Mill with the Erwin Auditorium in the right background.
(Courtesy The Herald-Sun Newspaper) 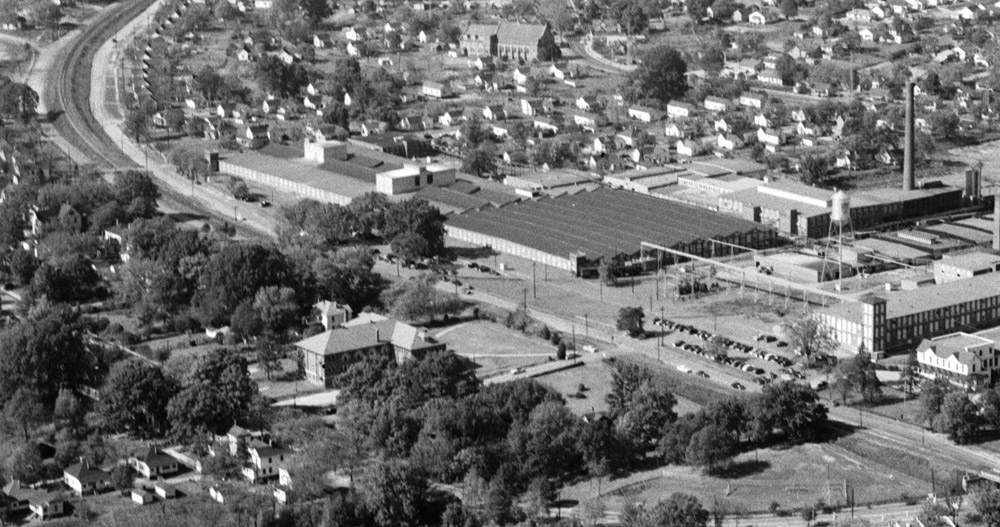 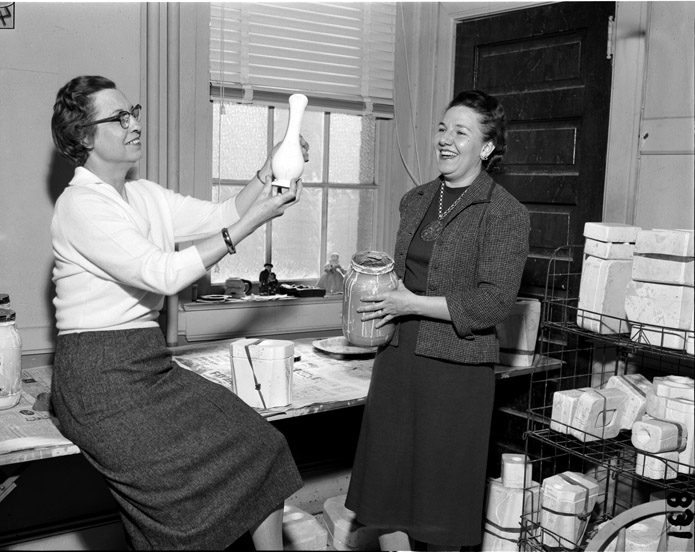 After 1956, the Auditorium was jointly owned by Erwin Mills and the City of Durham, and from 1966-1976, it was a city recreation center. 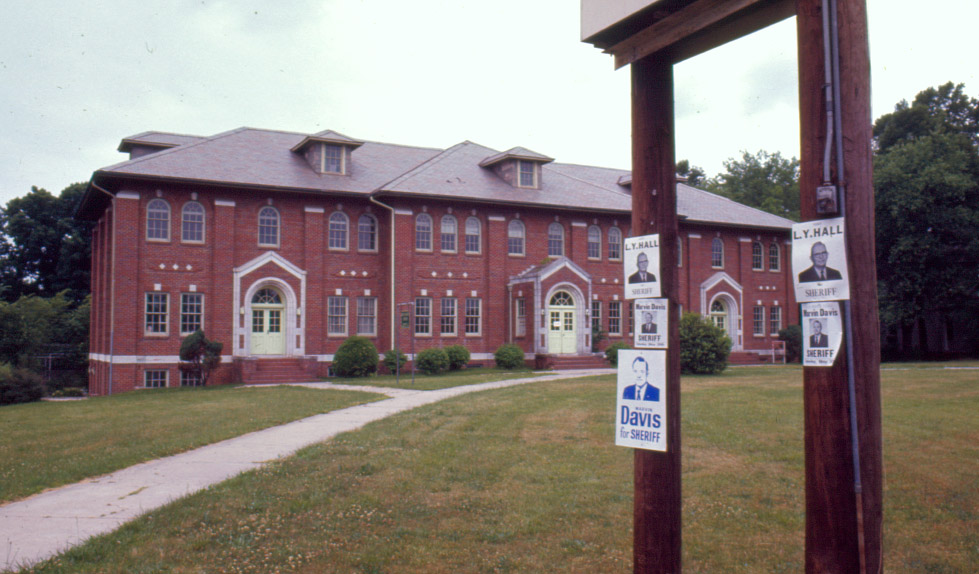 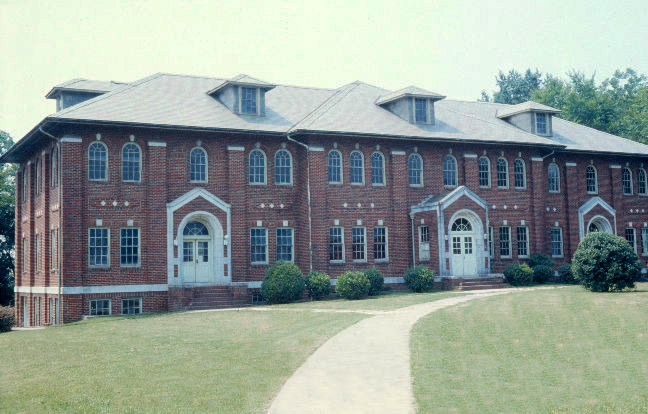 Jean Anderson tells the story of Erwin Auditorium's connection to the eventual arrival of the American Dance Festival in Durham; when a group of local dance enthusiasts sponsored "A Day for Dancing" at Erwin Auditorium in the early 1970s, they expected 50-75 participants - they got 600. The level of support gave them a substantive base to build upon, establishing summer programs that eventually led to ADF's migration from Connecticut. Similarly, the Durham Symphony was formed after a group met at the Auditorium after recruitment by Vincent Simonetti, the eventual first conductor for the Symphony.

In 1976, the Edison Johnson Rec Center opened, and Erwin Auditorium was closed. The city continued to use the building for storage for another 3 years before it was abandoned. 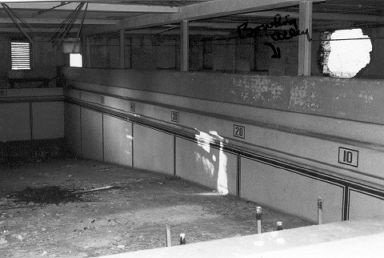 In 1984, the Erwin Auditorium was torn down in advance of the extension of the Durham Freeway from Erwin Road to 15-501. 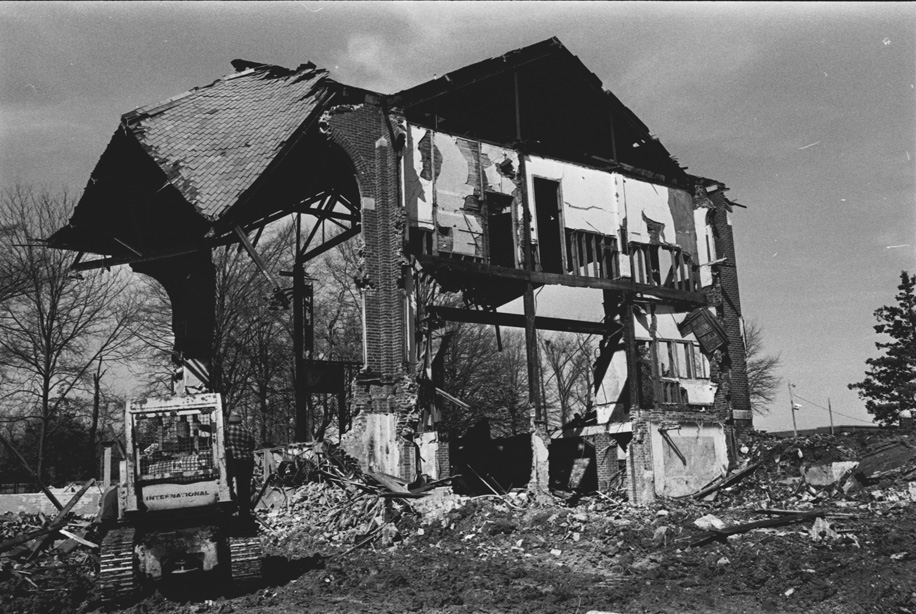 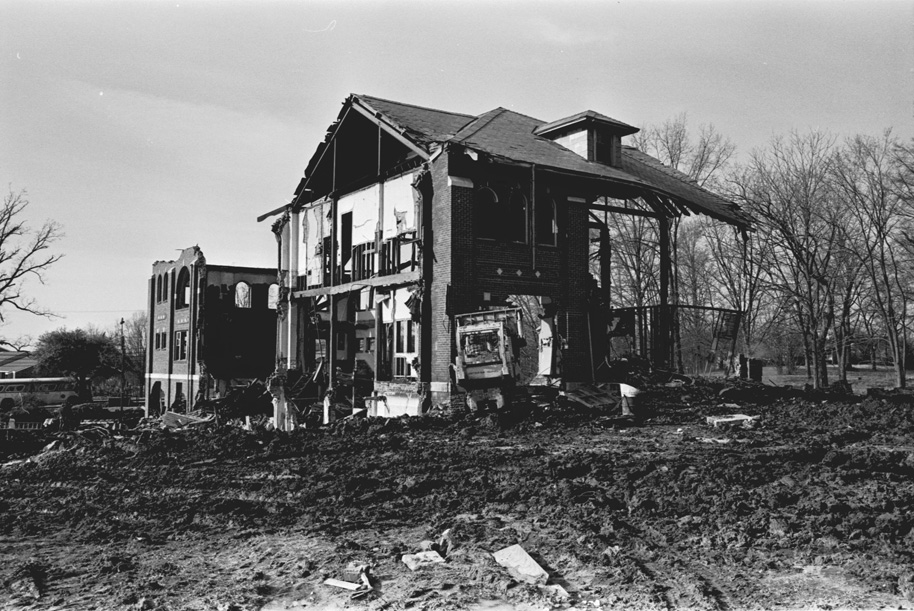 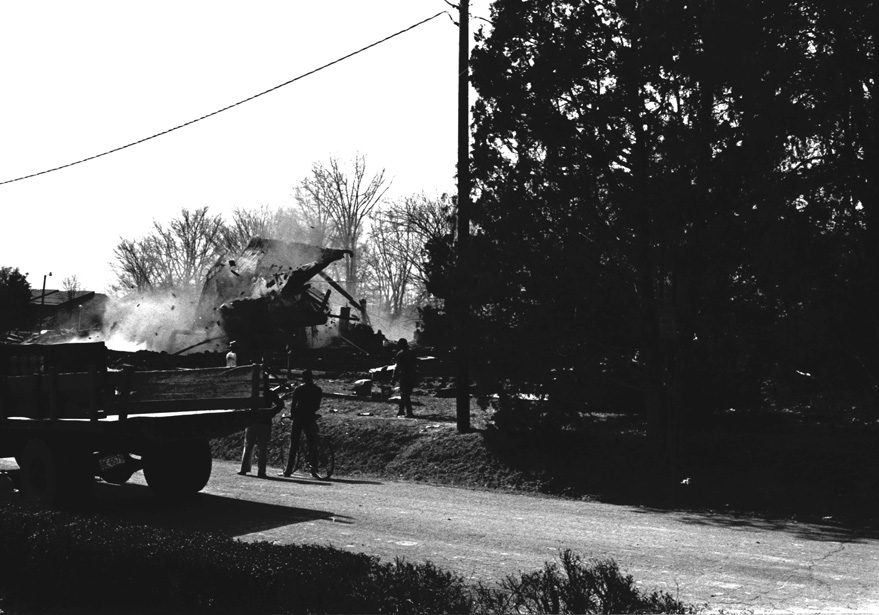 Some of the site of the auditorium still exists as woods, sandwiched between the RR tracks and the Freeway, but the building footprint hovers above you as you travel westbound on 147. 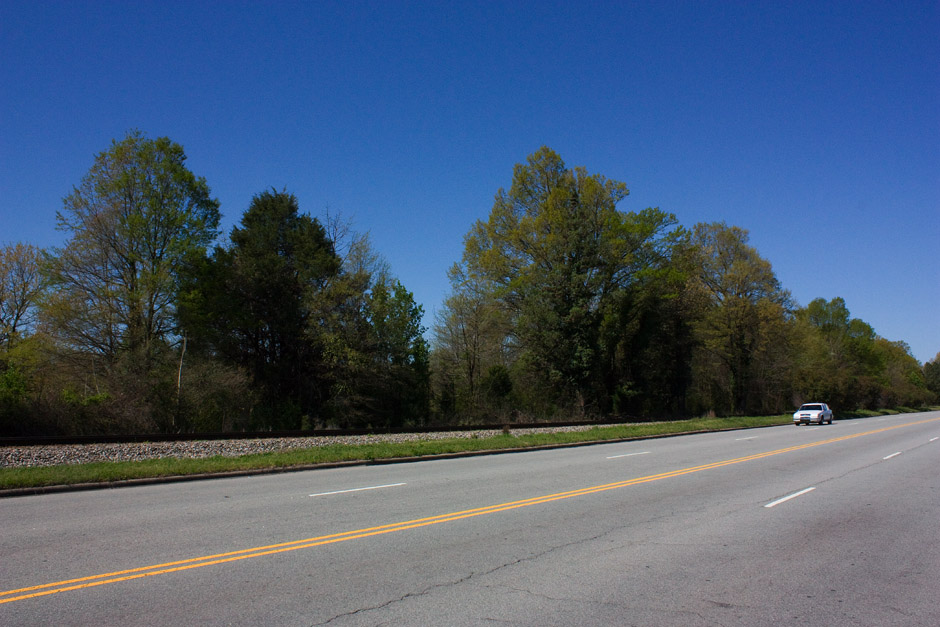 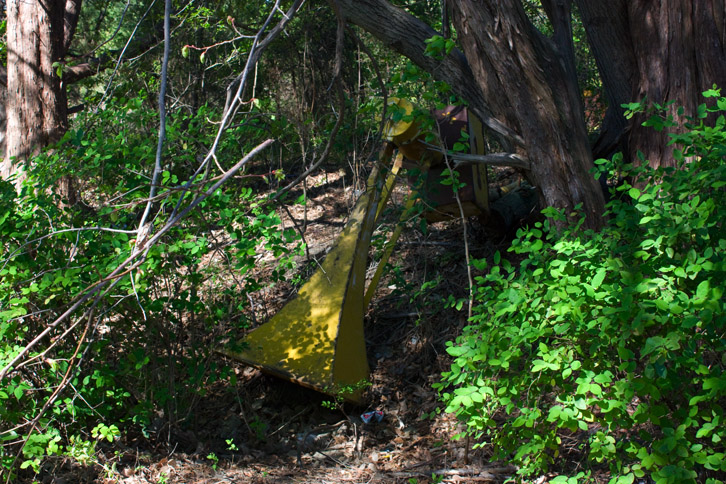 Former Air Raid siren located at Erwin Auditorium, still sitting in the woods between the tracks and the freeway - 04.12.09

Gary, that's a terrific photo merge there of the building ghosting the freeway. Nice work.

Ditto the previous poster: a damned shame for sure. It was a handsome building and served the community well for many years. I just don't believe that there wasn't still life in it or a work-around for the freeway plans.

My grandma met her husband there, and they used to go to the movies on dates.
In the 70s, I took music classes there and started my free-lance education in pool. Had NO idea it had swimming pool. Guess I was too focused on the pool table.

I've been here since 1986 so it is sad to think that the building had just been destroyed. It sounds like it was a lovely part of the community. Just wondering, though...was it open for all, or just for white people? In its heyday, it would seem to have been off-limits to many.

Great post.That is a good job

That is a good job of superimposing the auditorium image over the current image... kinda spooky!

Great story. I used to play

Great story. I used to play in table tennis tournaments in the auditorium.
Can't wait till you cover the loop between the Blue Light and Topps.

To go from the picture of the

To go from the picture of the women's pottery class to the demolition just broke my heart. What a shame. The building was beautiful and seemed like it was the at the heart of community recreation for so long.

The lone, rusted yet still

The lone, rusted yet still sonicly bright air raid siren is very eerie. A fitting way to end such a ghostly post. Thanks for a terrific post.

Can you share where that air raid siren is located? I'm curious if it's in a spot that can be easily found.

That's a thunderbolt chopper and horn. I would also be very interested in the location of this siren as the town of Butner has one that the chopper motor has burnt out, and the motor is a strange configuration which is not made anymore. If the motor can be revived in that thing it would save us a lot of money. Those sirens are about 1930s vintage.

Please don't make me regret posting pictures of the horn. I questioned doing so on the basis of whether anyone would go and try to poach the thing. It's part of Durham's history and should remain there - at least until the long-discussed Durham history museum comes to fruition.

I echo your sentiments. It was not my intention to go try to get it myself, but more along the lines of telling the people who are in charge in my town to contact the people who would be the overseers of the dept. which would be able to say yay or nay if it could be taken. I would imagine that would be the Sign and Signal Dept, but I am not sure. Just the part of the siren which is still there weighs about 350 pounds and would require several people as well as a vehicle of some sort, to be driven in the woods wherever it may be. Not to mention if the Supercharger is still around, that's another 200# The weight alone is most likely why it is still there to this day. There are actually a few remnants of durham's civil defense system still visible. There is a siren right next to Durham Regional, and one On Club Blvd. I'm not aware of any others still in "service" however.

Also, I like endangered durham, and I like what you guys are doing here and I would like to get involved in it some, how can I?

Minor note, as I research the

Minor note, as I research the Linthicums: Hill C., the elder Linthicum, passed away in 1919, so this should probably be attributed to his son, Henry Colvin Linthicum.

I remember going to Erwin

I remember going to Erwin Auditiorium with my older sisters and cousin. There were activities for the teens there but I was too young to participate so I was just a tag-a-long. I remember the swimming pool. When MTV first came on there was a video of "Cuts Like A Knife" that was shot of a swimming pool and I always thought of the Erwin pool when the video came on.

Vaguely remember my Dad taking me to the movies at The Durham Auditorium.
Once we saw a Shirley Temple Movie. The Good Ship Lolly Pop was playing. I love Durham and I never left.
We live in northern Durham county.