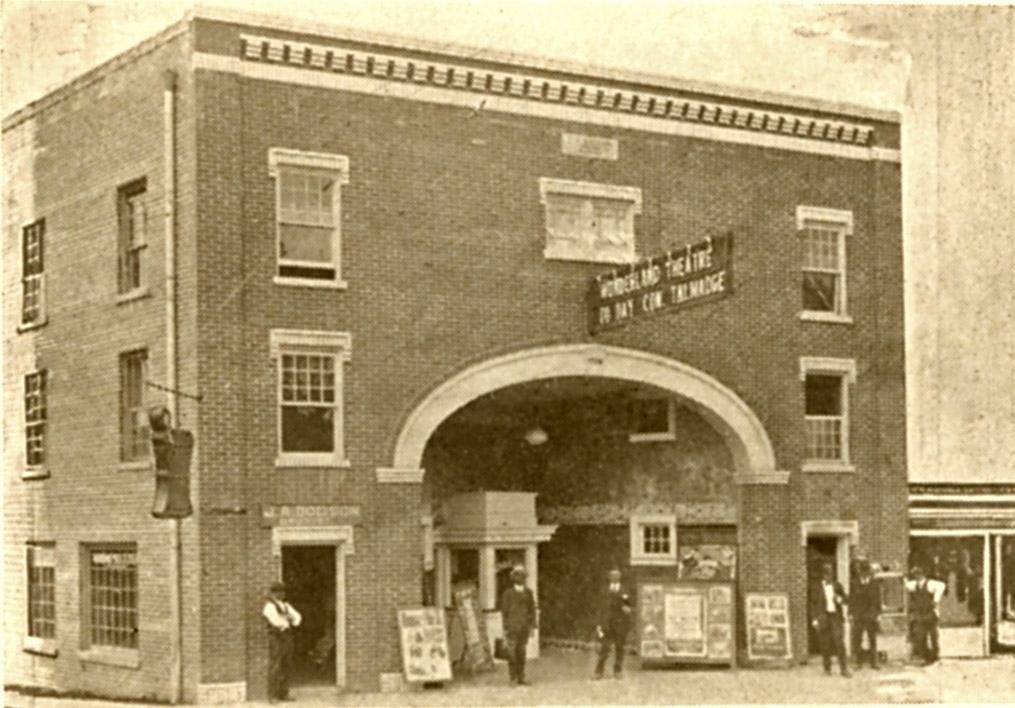 The Wonderland Theater was built in 1920 by Frederick K. Watkins, self-described "Movie King" (his house at 1218 Fayetteville St. still bears this description) at the southwest corner of East Pettigrew Street and Ramsey Street.

Mr. Watkins built the "first [African-American] theater in Durham" in 1913, per the 1951 "Durham and Her People." (It isn't noted which theater this is, although I suspect it may have been the Rex or the Electric.) Per Andre Vann, Mr. Watkins initially shot his own films and screened them in public schools, charging students 5 cents each at showings.

His theater holdings grew to 16 theaters in North Carolina, South Carolina, and Virginia during the 1920s.

The theater initially showed silent films with an accompanying musician (likely a pianist). Dorothy Phelps describes that Mrs. Hattie Shriver Livas would create music for each scene "for horror movies a creepy sound, playful tunes when children appeared, soft flowing tunes for the love scenes, and 'oh so many creations to follow the theme of the pictures.'" 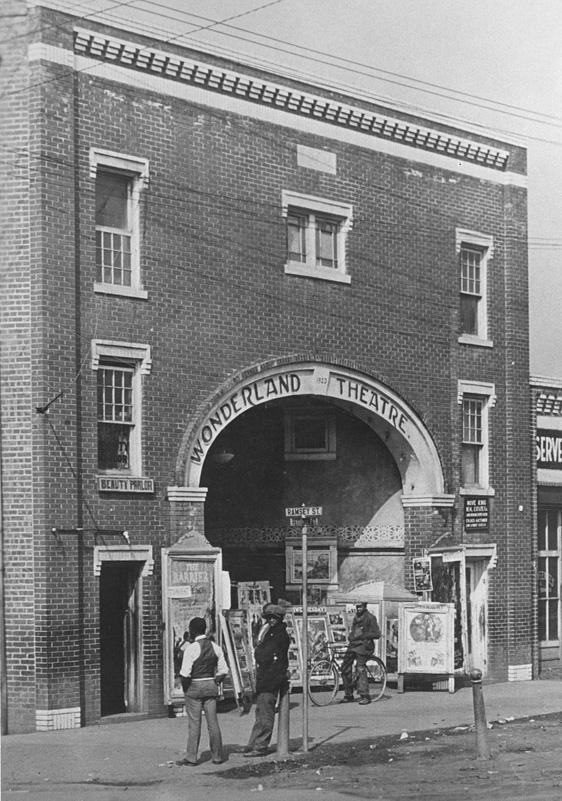 Mr. Watkins retired from management of the movie theaters in 1929, and delved into real estate soon thereafter (developing the former Durham Hosiery Mill No. 2 into a multi-tenant structure in the 1940s.) He married his wife, Parepa Bland Watkins that same year; she became principal of the East End School for ten years.

The theater appears to have shut down at the time of Mr. Watkins retirement, and was used as a union hall during the 1930s. The former drugstore portion of the building housed the Wonderland Barber Shop.

The city directories become quite confusing after this, primarily because the addresses seem to change as often as the businesses did. However, it appears that the building housed a Goodwill Store, and Papa Jack's package store for periods in the 1930s and early 1940s. 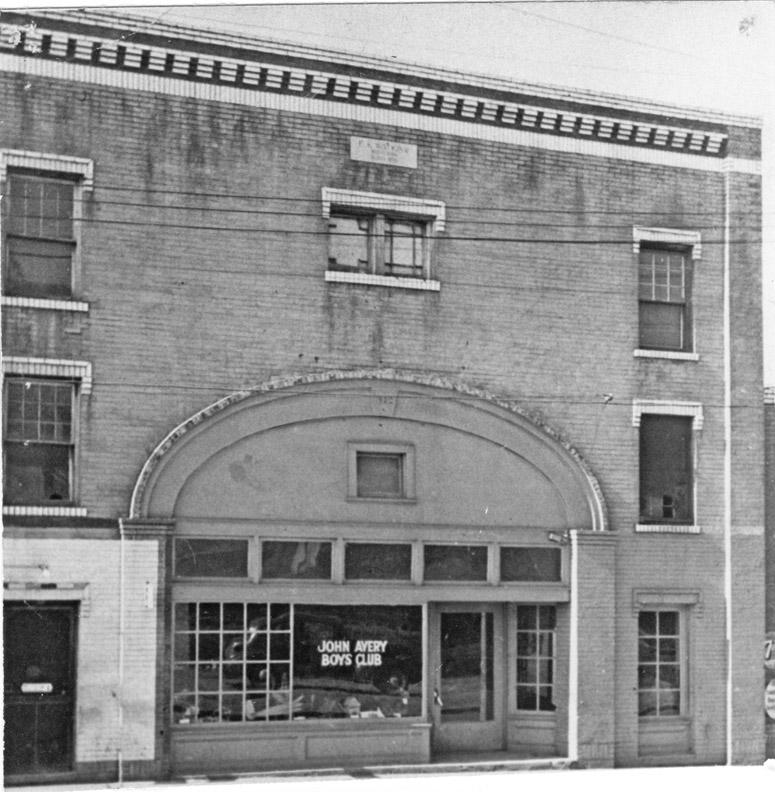 By the 1950s, the building seems to have housed Big Wheel Record Bar and Smith's Grocery, Fruit, and Produce Market. By the 1960s, the Triangle Barber Shop and an increasing number of apartments, as well as the Apter Cut Rate Food Store. 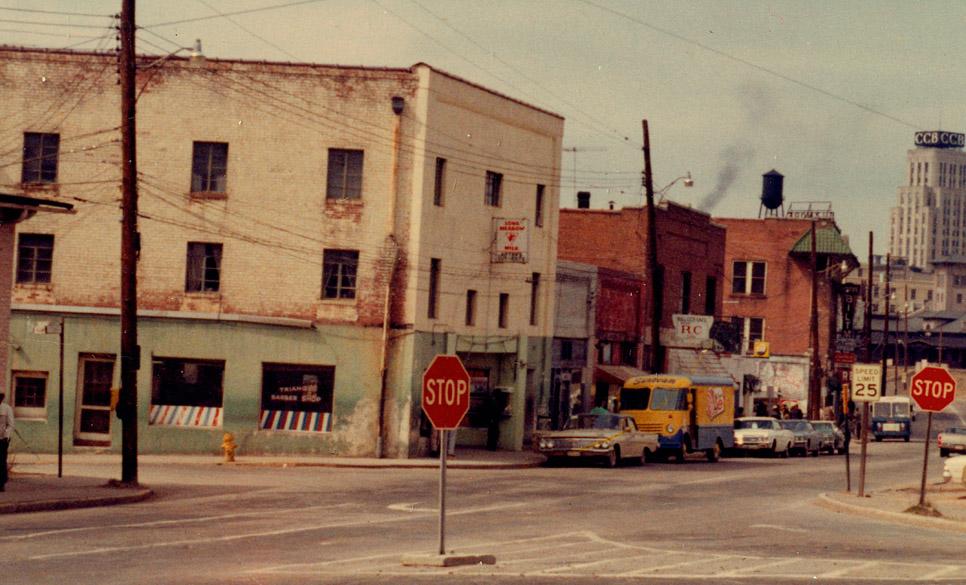 By the mid-1970s, the building appears to have been abandoned. 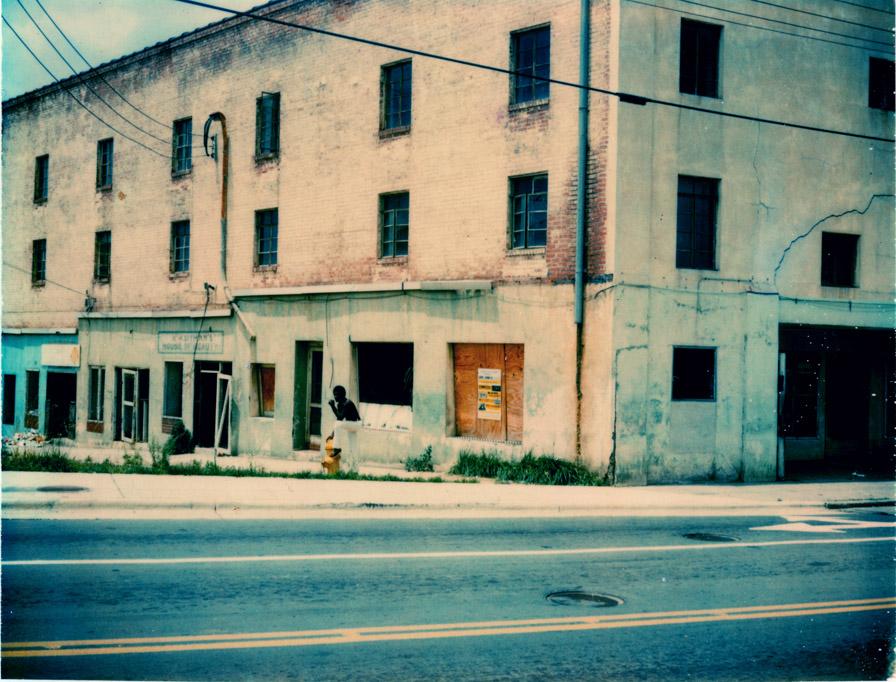 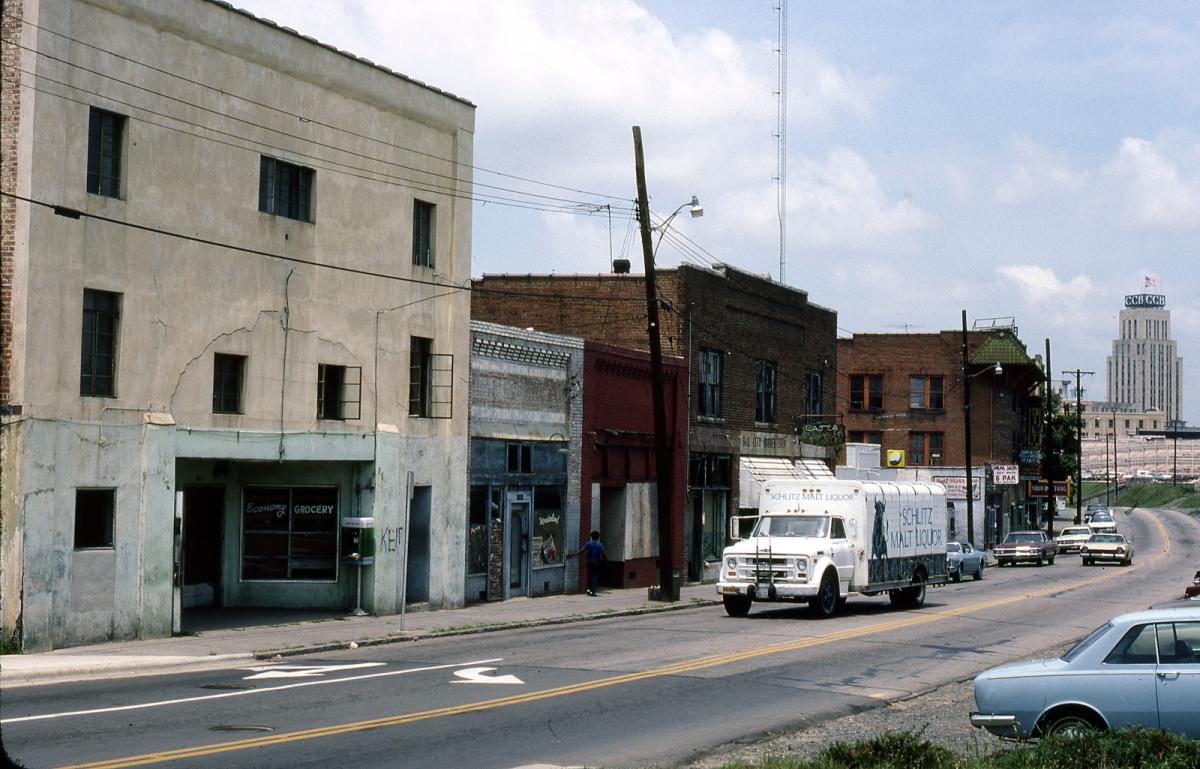 This photo looking northwest was taken in June 1976 by staff at the NC State Historic Preservation Office.

The building appears to have been torn down in 1977.

The parcel became overgrown and wooded for the next ~15 years before being converted into a gravel parking lot by Rick Hendrick Chevrolet. 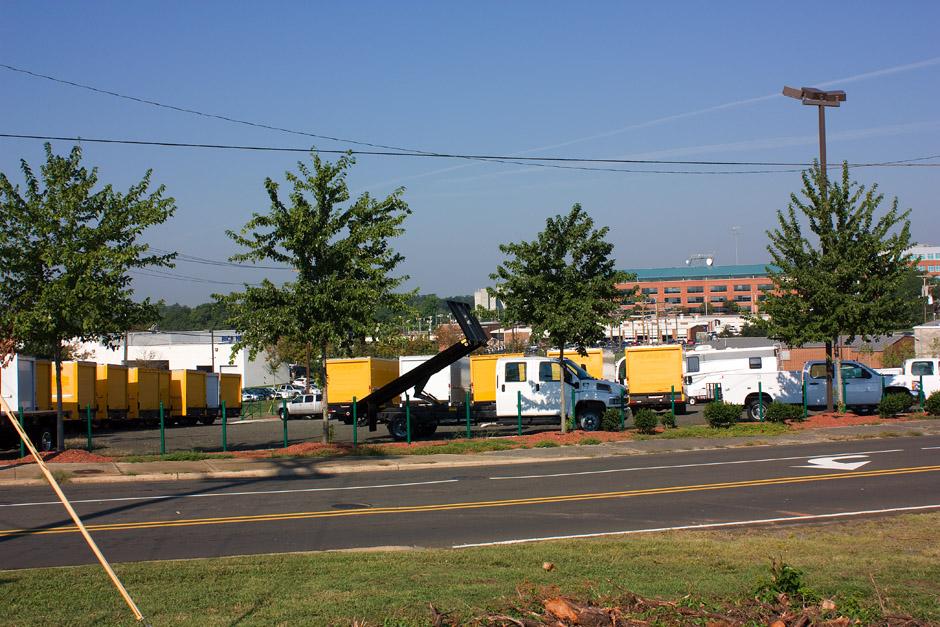 Looking southwest at the site of the Wonderland, 09.04.08.
(The corner of Ramsey and Pettigrew was ~30-40 feet west of the corner of S. Dillard and E. Pettigrew. S. Dillard did not extend south of East Pettigrew. The present-day "East Dillard" is a post-urban renewal street. You can note in the mid-1970s photo above that the corner has already been 'moved' to the east. You can also note the manholes in the street and sidewalk in the 1970s image and present day to orient yourself the location of the building.)

Below, an overlay of Hayti streets on a 2007 satellite image. 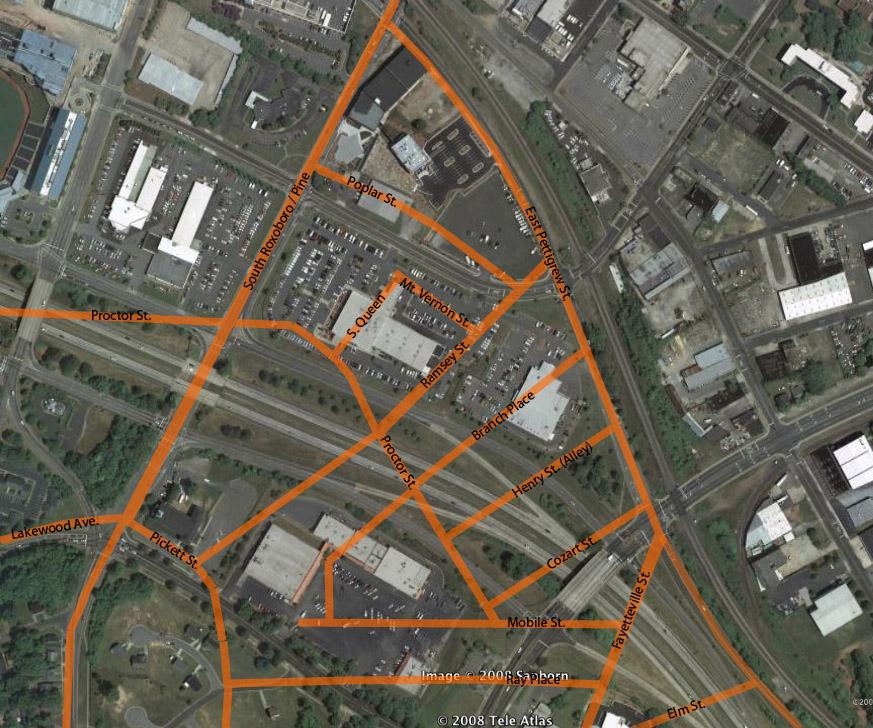 Google Maps Link to this spot

Over Halloween weekend of 2008, Preservation Durham offered its inaugural Ghost [building] Tour. That tour, in part inspired by the description in Endangered Durham of lost structures throughout downtown, invited participants to experience -- in situ -- historic streetscapes of downtown Durham. While standing in the location of the original...
Read More
Related People

Thank you Endangered Durham, for in this photo essay about the Wonderland Theater, you have illustrated quite clearly what happened to Hayti.

Pictures do speak thousands of words.

I have an image of the piles of rubbage resulting from the destruction of homes, buildings and neighborhoods that resembles the results of war.

Gary, what do you think the four-word phrase is on the bottom of the theatre's sign in the first picture? Looks like the last word is "TALMADGE".

I think the last two words are "Con. Talmadge" - which I think are short for Constance Talmadge, a contemporaneous movie actress. My guess would be that the first two would be "D-- Day?" maybe?

Maybe the first two words are TO DAY

"What happened to Hayti" is the result of the American people meeting in Congress and declaring that discrimination on the basis of race is against the law.

Agreed that the end of segregation was the predominant factor in the steep decline of Hayti during the 1950s-1960s, but that isn't the entire story, given that Hayti was on the decline before discrimination ended. The economic flight of the middle class from urban to suburban areas was not exclusively 'white flight' - the African-American middle class was seeking the American Dream as well.The general economic decline of Durham during the postwar era exacerbated symptoms in Hayti, particularly as it came to be blamed for its "blighting influence" on the remainder of Durham - economic malaise as contagion. When the area became the focus of 'improvement' efforts - that by eliminating the neighborhood, it would improve (through the construction of the Hayti Shopping Center and new housing) economic investment (and social investment) stopped. Why polish the brass on a sinking ship? It isn't a simple story, which is what makes it interesting.

One might add that the consistent short-sightedness of Durham's politicians and bureaucrats destroyed Hayti and other historic areas. But oh well... it has happened and still happens in too many cities and counties across the U.S.; just put a sign there later and tell the story of what once was.

GREAT posts, by the way, Gary! I've always been interested in the Wonderland's history. Keep on truckin'...