306
Cleveland Street
Durham
NC
Year built
early 1900s
Year demolished
~1970
Construction type
Masonry
Neighborhood
Downtown Central
Cleveland-Holloway
Use
Church
Building Type
Church
Can you help?
You don't need to know everything, but do you know the architect?
Log in or register and you can edit this. 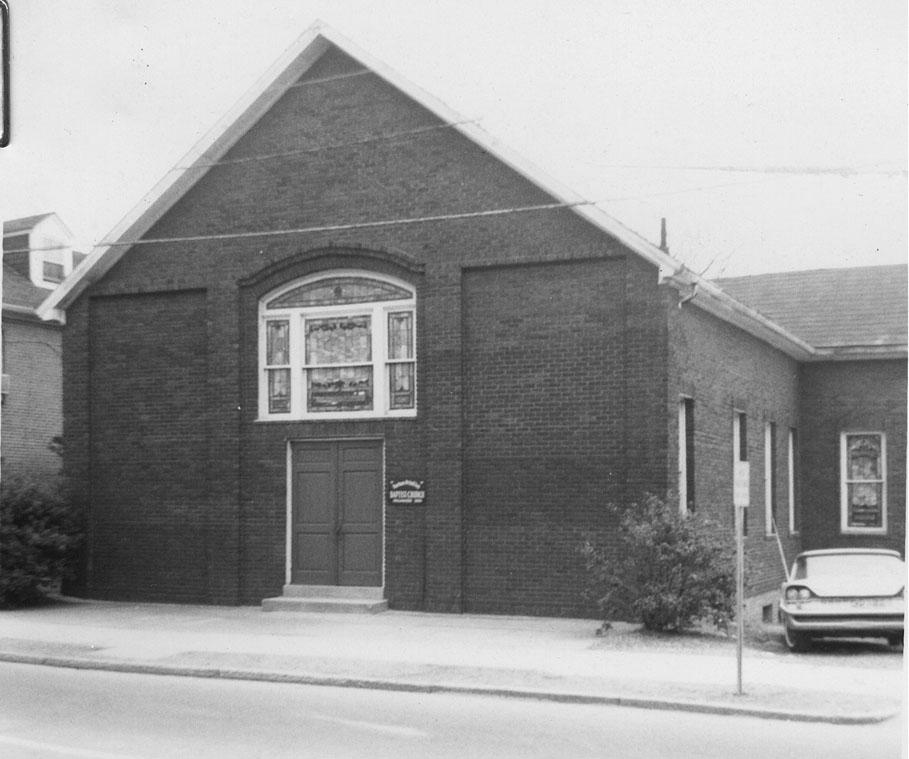 Although rarely mentioned alongside the "Big Four" churches downtown, the Primitive Baptists were here quite early - forming a congregation in 1885 under the leadership of TY Monk. Per Boyd, the majority of the members came from the Eno and Mt. Lebanon churches in Durham County. They established their church near the intersection of Cleveland and Liberty Streets, directly across Cleveland St. from Durham Methodist, later Trinity Methodist Church. 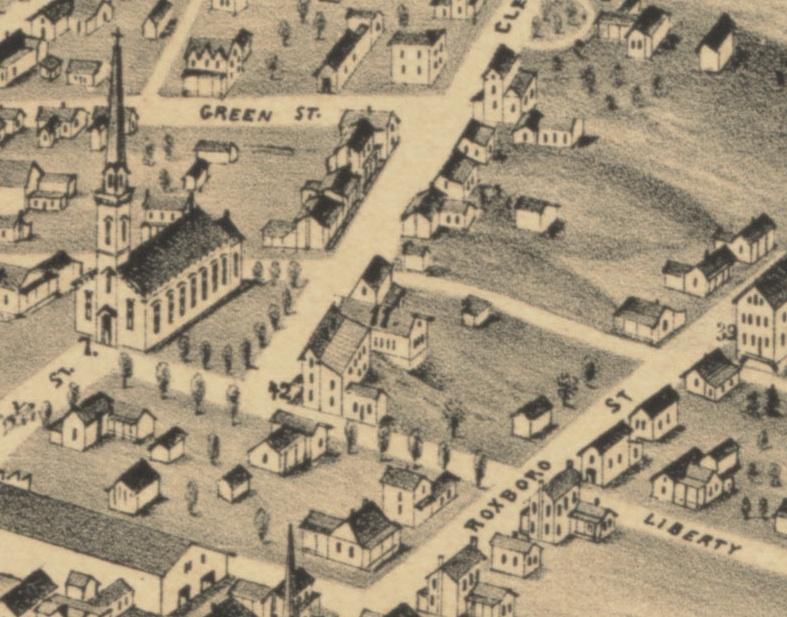 Everything I know about Primitive Baptists I learned in the last 5 minutes from Wikipedia; as with anything wikipedian, caveat emptor. But the name is, of course, intriguing - and seems to derive from a sense of primitive as 'original' rather than the connotation we might leap to.

It appears that an early frame chuch was replaced with a cruciform brick church by the early 20th century. 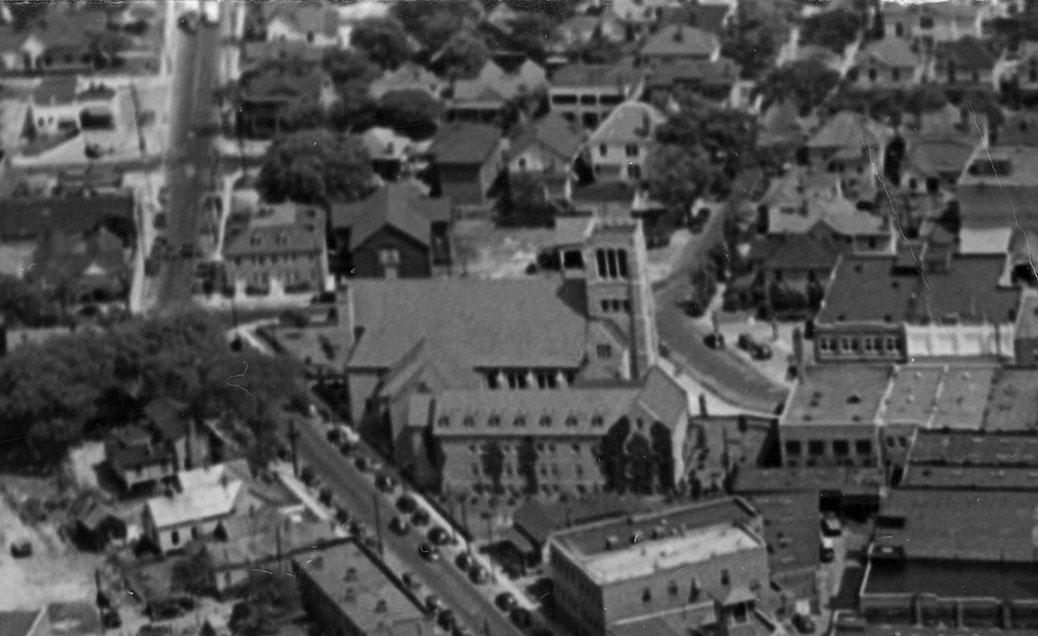 Looking east, 1938. The church is the cruciform structure just 'above' (beyond) Trinity Methodist.
(Courtesy Duke Archives) 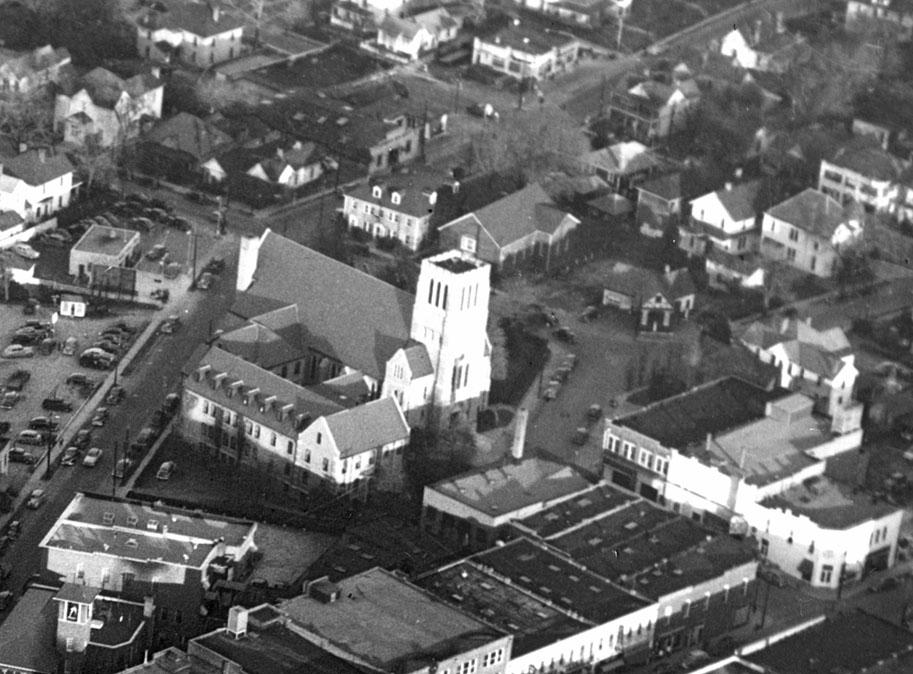 The first actual street-level picture I have of the church is from 1966.

Urban renewal took down this building around 1970. 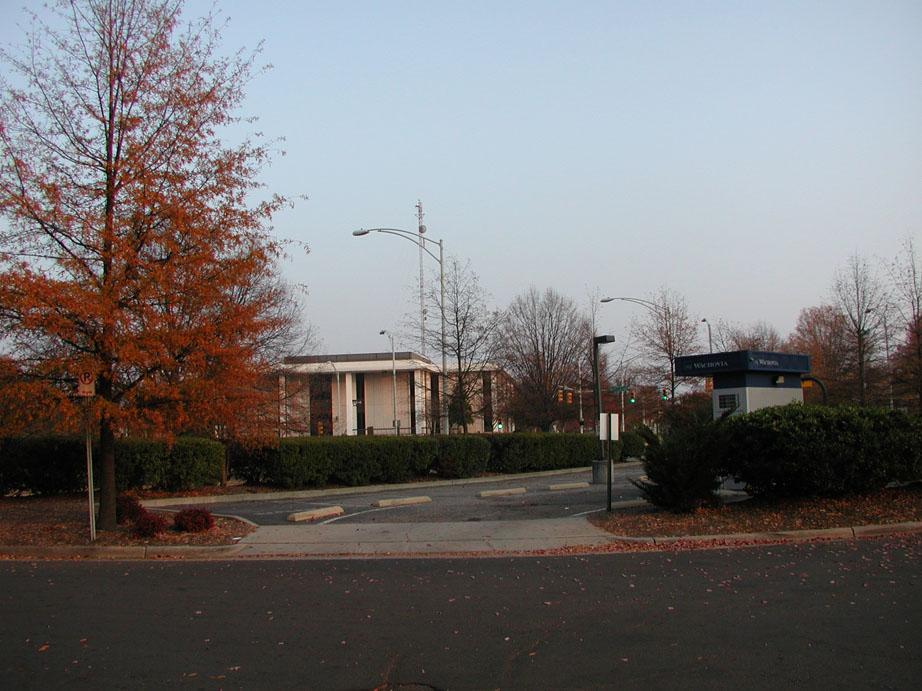 Looking east from 'Cleveland and Liberty', 2007.

The Primitive Baptists are probably most notable (and perhaps most distinguished) by their use of the old Shape Note songbooks for their hymns, and using the technique to lead congregational singing.

I could go on a long time about shape note singing, but Wikipedia might be a better choice... ;)

She is the Secretary/Treasurer of the small company that publishes the Lloyd's Hymnal, the only remaining Primitive Baptist hymn book. Because there is no musical annotation in the book and no musical instruments are used in the church, there are amazing differences in the ways people sing these hymns. These differences tend to vary along regional and racial lines.

The predominant style of singing is related to shape note, but it is exactly shape note. My stepmother has explained the differences to me before, but I can't recall the specifics off the top of my head. I also had this conversation a number of years ago with the Badgett Sisters, a local duo (trio until one of the sisters died) who include shape note in their repertoire.

If people are interested, I will bring a couple of Lloyd's Hymnals from home when I go down at Christmas and share them with ED readers. Just post here so I can gauge interest.

There are a couple of interesting books and CDs/records that discuss Primitive Baptist singing in more detail. I recall that one was published by the University of Alabama (Lloyd was an Alabama native) and one by the UNC Press.

Wow, that's fascinating! I'd thought that the Primative Baptists were shape noters, but googling "Lloyd's Hymnal" certainly shows me I wasn't completely right about that. This article fills in the gaps.

It mentions the "lined out" singing style, which is even more exotic than shape note singing by an order of magnitude. In an odd twist of fate, I left Asheville to go to Carleton College in Minnesota, where I had a chance to take a course in traditional Appalachian music, taught by a professor from Graham County, NC. He was primarily a composer, but had never lost interest in Appalachian and country music, and had gone around collecting recordings of lined out singing from Old Regular Baptist churches in the south. The short description of the singing in that article is pretty accurate, and I don't think I could improve on it without doing some serious blogjacking.

Anyway, thanks for sharing, Mike!

There is another PB church in eastern Durham County. At the intersection of Cheek and Junction Roads, there is a one room frame structure built in 1899. It was built specifically for this purpose and remained in use until approximately fifteen years ago, at which time the covenant was officially closed. I have a hymnal from that congregation. The building today is privately owned and maintained. It is in excellent shape. This was the Ross Primitive Baptist Church. Today, the outdoor sign identifies it as Ross Meeting House, Built 1899. There was never water or sewer, and the two outhouses still exist on the property.

Looks like the church had a brick facade by 1966; probably added at the same time the rear addition was built.

Funny it was where that particular ATM machine is. I hate that thing; its location is inconvenient, its driveway is too tight to maneuver my truck through, and it's unsafe. I almost feel like it's the ATM in Steve Martin's "LA Story," where there's a line of muggers waiting next to the ATM user's line.

Thanks everyone for your great comments - I love hearing additional info/history. It's much appreciated. I will definitely check out the church at Cheek and Junction.

Last anon - I think the brick is very early, by the look of the brick. I've looked at two 1920s aerial shots that show it in its 1966 state then. I'll likely amend the text, as it appears from these shots that there isn't actually a wing, but that the church had a cruciform shape, with rather short 'arms' even in the 1920s.

This is Durham Primitive Baptist Church. I grew up in this church. In fact, I earned my allowance by helping to clean the church before services. It had a coal/oil furnace, so the pews would be covered with black dust in the winter and had to be cleaned real good.

The congregation moved to other quarters in the late 70s. All the windows were removed to the new church, along with the pews. The flooring in the old church was removed and made into tables that are currently in our dining hall. The church did have "arms", as you call them, and a balcony where the "colored" could attend church. We had a basement where we fellowshipped and ate lunch. If I remember correctly, there was a service station on the corner, although it was never open on Sunday. We met on the third Sunday of the month. Elder D.V. Spangler was the preacher that I remember so well. He had a strong voice and yet a gentle nature when it came to the children. Yes, we sing by shape notes as you call them, and use Lloyd's Hymnal now.

The current church is located on Pacific Avenue and still meets on third Sunday.

There are other Primitive Baptist churches in Durham. There are two on old Oxford Highway, Eno (white), and Moore's(colored). Moore's has recently been changed on the front. Lebanon P.B. Church is on Guess Rd at Russell Rd.
Thanks for bringing back some good old memories for me.....

Thanks for giving us some more insight into the church. There gas station is shown here

I took a look at the Durham Primitive Baptist Church on Pacific yesterday. It's just off North Roxboro, directly behind the Lowes.

The brick church on Pacific looks very similar to the church that stood downtown. The cornerstone ("Est 1885") is to the left of the front doors. The front entrance is higher here, at the top of stairs.

Indeed the old stained glass windows (including the ones shown in your 1966 photograph) appear on all sides of the new church, including the back side.

As Anon mentioned, a sign lets passers-by know that services are held on the third Sunday.

I know the owner of the Ross Meeting house on Junction. The old church is beautiful in its simplicity. You can still see the metal pipes in the yard that served as "table legs" for large church picnics under shade trees.

I was told that Junction was named for all the different train tracks that crossed the area. In an interesting historical twist, Duke Energy continues to address his elec bills to "Fish Dam Road" -- and he still receives them. :)

Yes, Gary, I saw the service station when I looked at the overview again today. Thanks for the link, though.

And John, the design for the new church was patterned after the old church, with the addition of the dining hall to the right side instead of being in a basement. The new church does not have the arms to each side, but, inside the pews do face like they did in the old church, meaning those at the left and right front face each other. The church was built on land behind Ed Clements' old home that faced Roxboro Rd. When we built the church there was nothing on that street but the big brick building across the street, which was Liggett and Myers office building...oh, and the road dead ended just past the church....nothing like it is now.

I am a Primitive Baptist in Bel Air, Maryland. There are many Primitive Baptist churches throughout the country and in some other countries. Our form of worship is simple...preaching, praying, singing and most that I know of do use the shape note singing. There are other Primitive Baptist hymnals besides Lloyd's. Primitive does refer to being the original branch of Primitive Baptists before the major divisions in the 1830s. We hold to the original docrines and practices of the majority of Primitive Baptists before that date. We believe in the 5-points of Calvinism and practice baptism by immersion, communion with bread and wine, and many, but not all, practice foot-washing. If you would like more information, Elder Lassere Bradley, Jr. has a web site and a radio station that can point you to many resources. It's been a delight to read the messages.