200-210
Morgan Street
Durham
NC
Cross Street
Rigsbee Avenue
Year built
1910-1920
Year demolished
1944
Architectural style
Italianate
Construction type
Masonry
Post and Beam
Neighborhood
Downtown Central
Use
Tobacco Auction Warehouse
Building Type
Industrial
Can you help?
You don't need to know everything, but do you know the architect?
Log in or register and you can edit this. 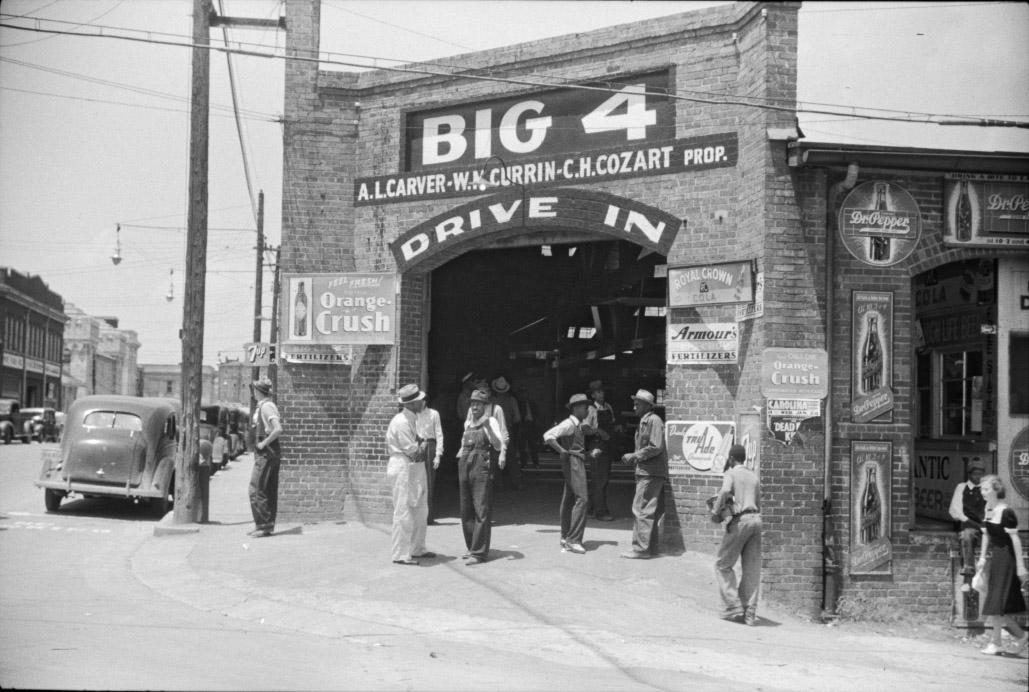 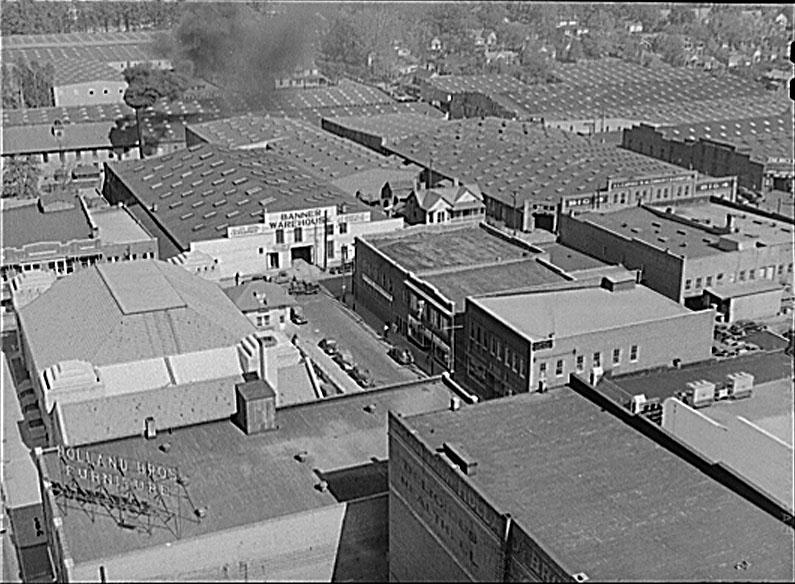 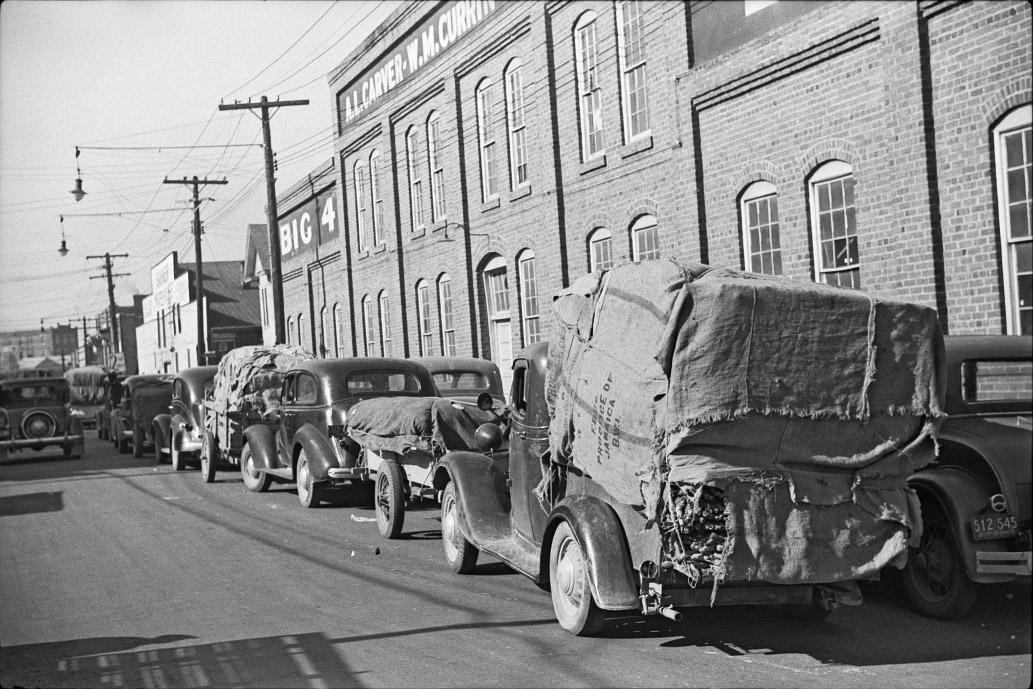 Looking west up Morgan from near Rigsbee Ave.
(Courtesy Library of Congress) 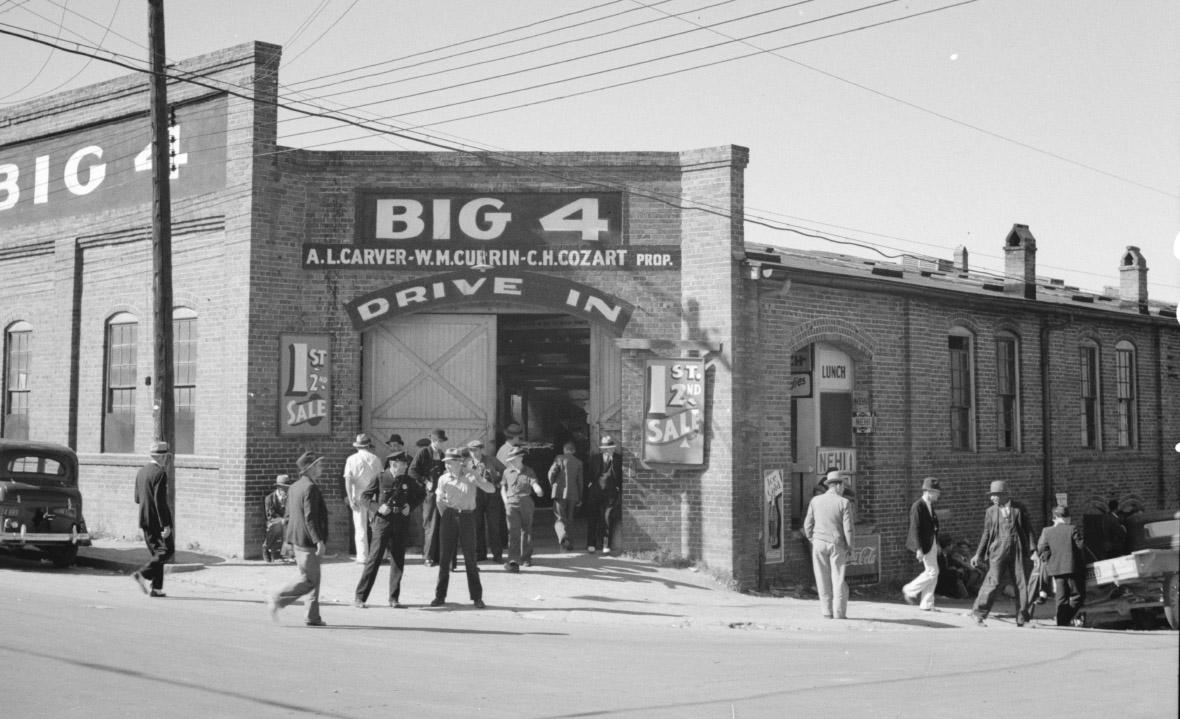 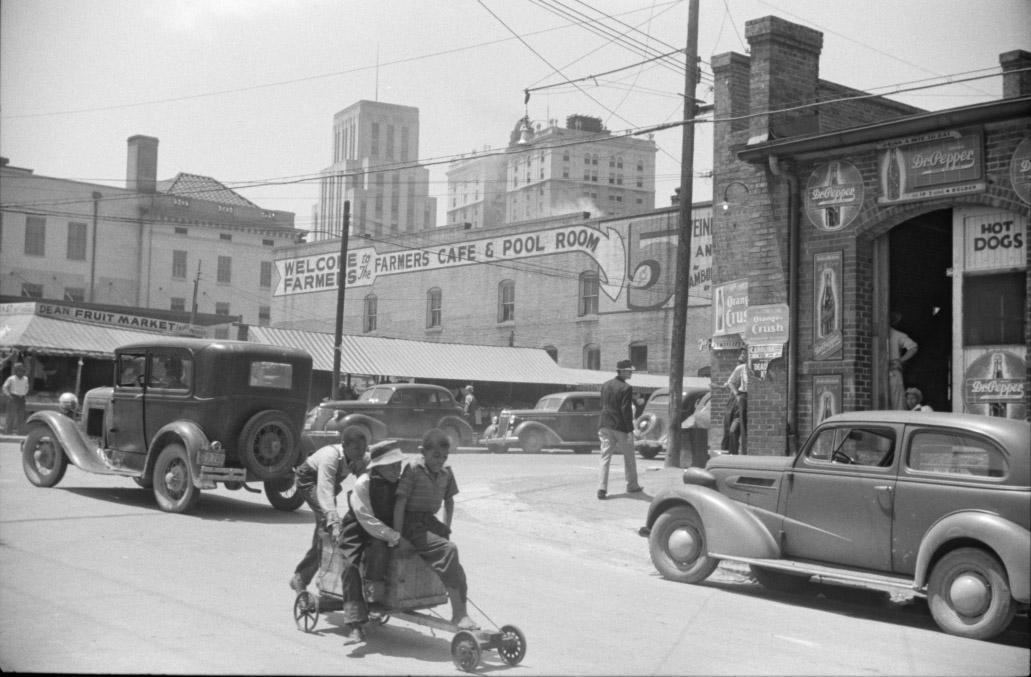 Looking south-southwest - the Big 4 warehouse is to the right. 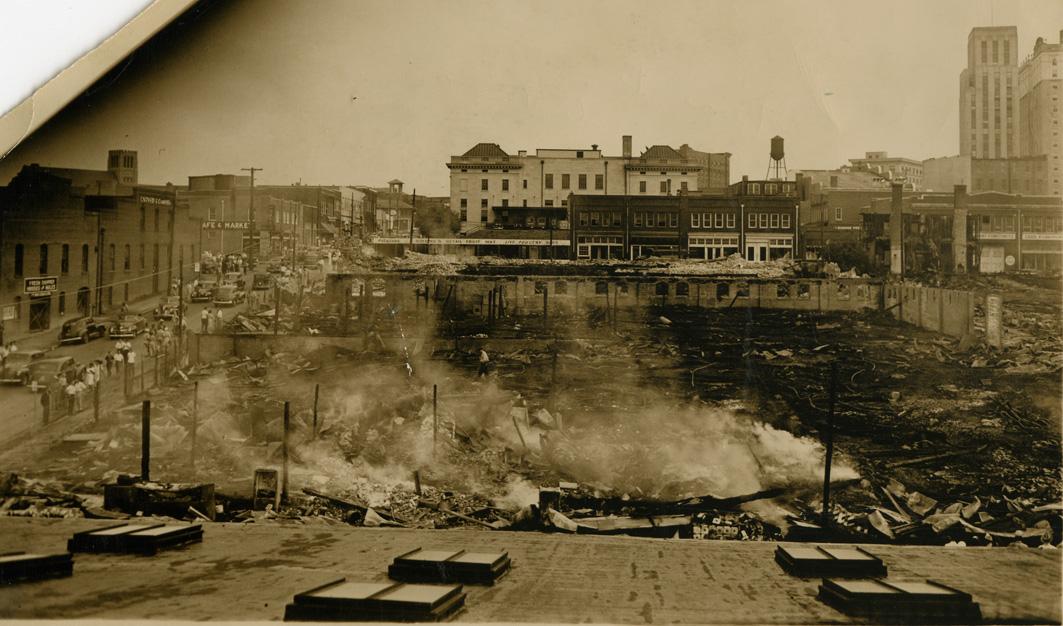 Both Tim Tyson and Christina Greene have postulated that the fire resulted from protests on the night of the murder of Booker T. Spicely - he was shot and killed by bus driver Herman Council earlier that day.

There is no mention in the newspapers - either Charlotte or Durham - of soldiers called from Butner that night, protests, violence, etc - even though they report on the murder of Spicely as well. It's doubtful that such a riot would have occurred the night of the murder - rather that upon Council's acquittal several months later. It's particularly dubious that a race riot, mobilization of Butner soliders, etc. would occur with no mention in the papers.  Unfortunately, the Carolina Times from that era is lost. Greene does not source her statements; I don't own Tyson's book to check his source for the assertion.

It's also particularly dubious that, if a mob was going to start a fire to destroy white-owned businesses, they would choose one big brick tobacco warehouse. The bulk of Durham's African-American population would have had to come from Hayti, across white-owned downtown, and past white-owned factories, where they could have inflicted far more extensive damage

Sometime during the 1950s, two car related businesses, Midtown Motors and Goodyear, opened on the site. 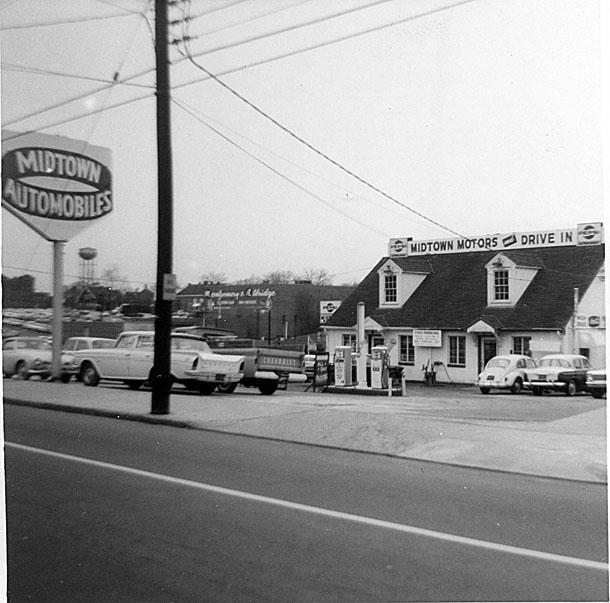 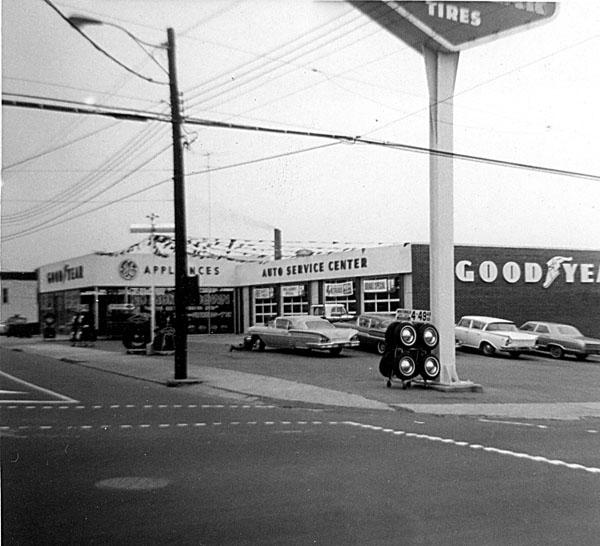 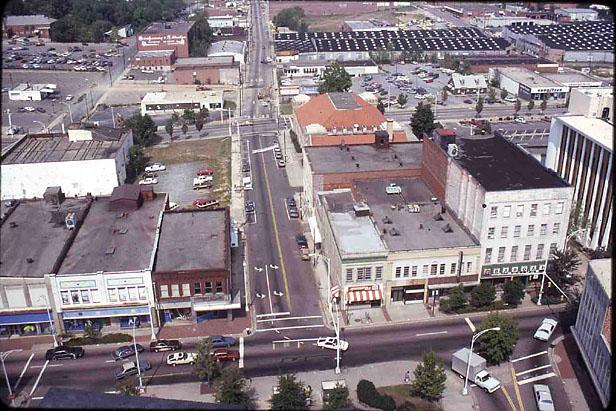 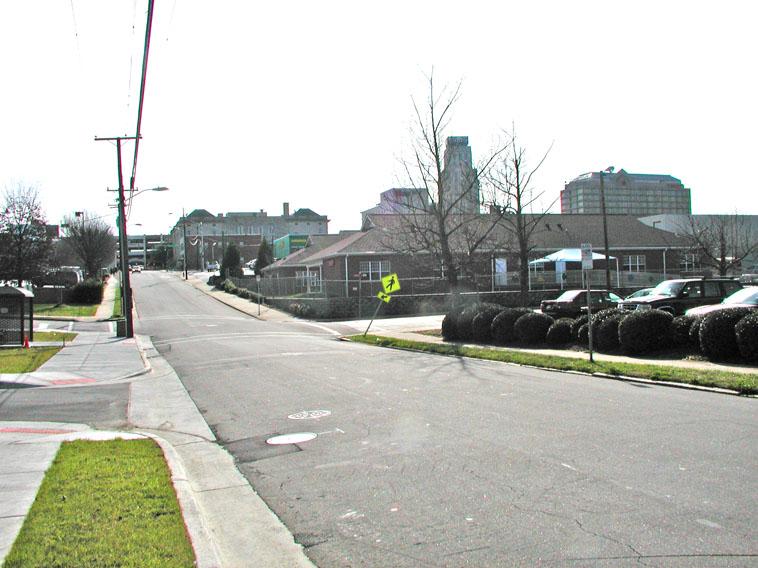 As you may well know, that block of Morgan wasn’t simply destroyed by fire in July 1944, but was burned to the ground in a night of rioting following the cold-blooded murder of an African-American soldier by a white bus driver.

Booker T. Spicely, a private stationed at Fort Butner – he’d been an employee of Tuskegee Institute before the war – boarded a Durham City bus in the company of another black soldier and a young woman and her little boy he’d just met at the bus stop. They all took seats right behind the driver, a breach of segregation protocol. When a couple of white soldiers boarded the bus shortly after the driver, a hot tempered man with an apparently well earned reputation for drinking on the job named Herman Council, told Spicely and his companions to move to the back of the bus. They all ultimately did, but not before Spicely and Council exchanged words. A short time later, as Spicely disembarked through the rear door at a stop, somewhere along Club Blvd. I believe, Council exited the bus through the front door with a pistol in hand. He shot Spicely twice in the chest at close range. The private was not long in dying.

The murder touched off a night of violence, and soon those tobacco warehouses along Morgan St. were burning brightly. The City apparently called upon several thousand fireman, civilian volunteers, and soldiers from Butner to battle the fire and maintain order in the streets. From the looks of the picture you’ve posted they weren’t match enough for the blaze.

A couple of months later an all white jury, after deliberating for all of 28 minutes, acquitted Council of murder.

Wow - no, I had no idea. Thank you so much for adding this; I certainly wouldn't have left this out. Could you give me a reference for this? I'm slowly adding to my collection of books, but the ones I have are frustratingly sparse on African-American history and labor history in particular. Would you mind if I added this to the body of the post, credited as you wish?

My pleasure. I’ve learned so much from your site that it only seems right to return the favor in some small measure.

The story is told in Tim Tyson’s essay, “Wars For Democracy: African American Militancy and Interracial Violence in North Carolina During World War II,” in Democracy Betrayed: The Wilmington Race Riot of 1898 and Its Legacy, as well as in Christina Greene’s book, Our Separate Ways: Women and The Black Freedom Movement in Durham, North Carolina. Neither book specifies the site of the conflagration, but Tyson names several of the businesses destroyed. From there it just took a couple of minutes with a city directory from 1944 to know that it was the block bounded by Morgan, Foster and Rigsbee. Beyond this story both books are essential reading for anyone interested North Carolina and Durham racial history. And the footnotes and bibliographies of both reference enough other work to keep one reading for some time to come.

Osha Gray Davidson’s Best of Enemies – which happens to be the book all incoming Duke freshman will read this year – is also good on Durham’s racial history, though it tends to focus on two figures in particular, Ann Atwater and C.P. Ellis. I don’t know of a book that focuses on Durham labor history, though Greene’s book has more on it than one might expect from its title. I haven’t read it, and it doesn’t focus on Durham particularly I don’t think, but I am told that Robert Korstad’s Civil Rights Unionism: Tobacco Workers and The Struggle for Democracy in Mid-Twentieth Century South is quite good.

Please feel free to add it to the body of your post, edited and credited any way you like.

Much thanks again, and I've added your text to the post. I was looking at Christina Greene's book last weekend, actually, thinking I should buy it. This confirms that.

I'm glad you've found the blog useful - I'm definitely an amateur historian, and sometimes the broad gaps in my knowledge are apparent - thanks for filling in.

Please see updated text in the post; there is no evidence that Spicely's murder and the warehouse fire were related, or that soldiers from Butner, were called out, or that there was racial violence. Greene cites Tyson who cites an unpublished student paper. No primary sources available from the time support the assertions by Greene and Tyson.

I consulted Dr. Jerry Gershenhorn -- an NCCU professor of history and local expert on Louis Austin, the longtime editor of the Carolina Times. Here's what he had to say about the connection between the murder of Pvt. Spicely and the fires that night: I have not seen clear evidence of the connection between the murder of Spicely and the fire. Although there are no issues of the Carolina Times from 1944, the FBI files on Austin include Austin's editorial from July 15, the week after the fire, and there is no mention of the fire in that editorial, or in others from 1944 that the FBI included in their files. The FBI file mentions that there was extensive coverage of the shooting of Spicely in the Carolina Times, but does not divulge the details of those articles. So, I'm not sure of the connection between the fire and the murder. Looks like this remains a mystery.

It has been now a little over seventy years since the fire but more importantly the murder of Booker Spicely. It has already been said in past comments there are no clear connection between the two events. The fire occurred about an hour and fifteen minutes after the shooting but all newspaper reports, investigations by Camp Butner, the FBI and an undercover black agent who was sent to Durham from the Army's Security and Intelligence Division never found any credible threats of violence.

One black Camp Butner soldier was found to have a substantial amount of ammunition and a disassembled M1 Carbine in his locker, but that seemed to be the biggest threat. It was even reported by the agent that the crowd that gathered that evening was more out of curiosity than for a potential demonstration.

The MPs arrived only 10 minutes after the incident and since PVT Spicely was still alive, they took him to Watts Hospital (now School of Science & Math) which was 1/4 mile away but since it was a "whites only" hospital they had the take him to Duke instead where sadly he died on arrival.