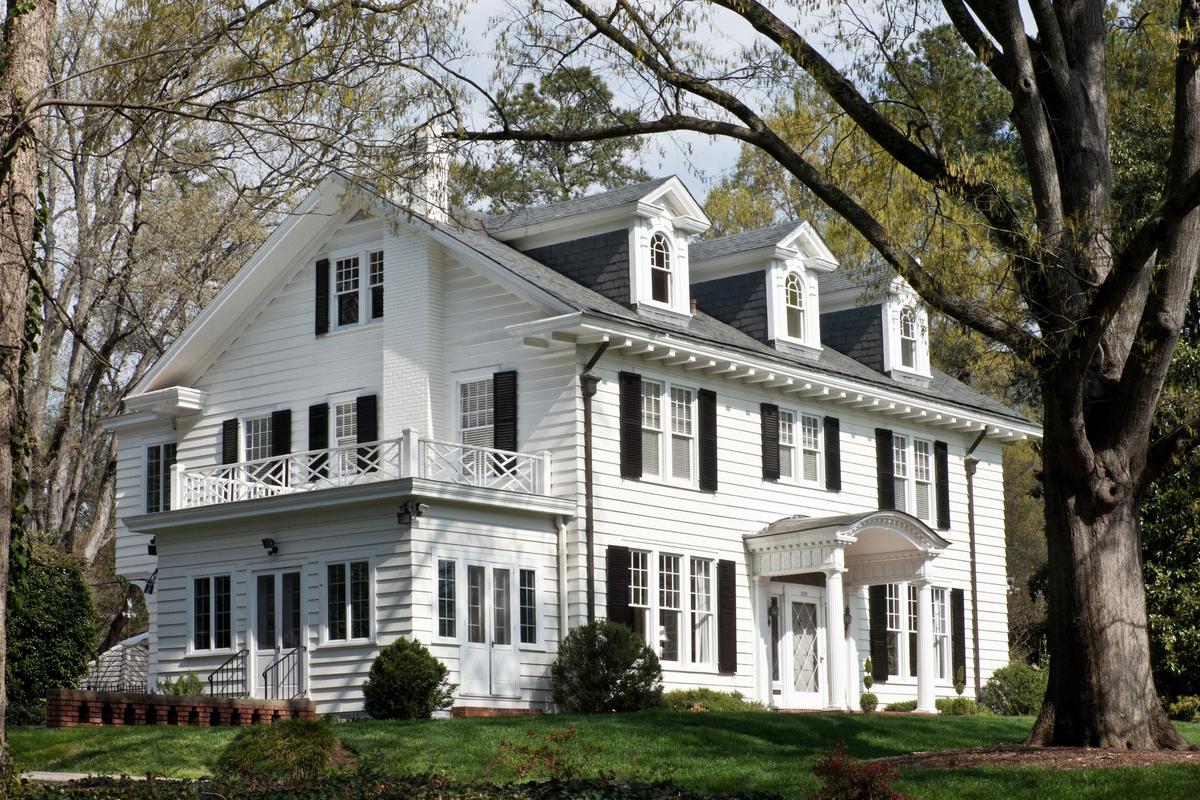 This elegant and beautiful family home has a hidden claim to fame: it was the main set for a 1990 film called ‘Once Around’ with Richard Dreyfuss and Holly Hunter.  Ostensibly set in New England, the family’s house throughout the film actually stands here at 1506 Hermitage.  Snow (really styrofoam) was brought in to shoot the winter scenes in the middle of summer, and the movie trailer shows people dancing in the foyer and a wedding bouquet thrown from the stair landing.

Before Hollywood came to town, this house had served a number of Durham families ably.  Hugh Edward White, an office manager at Liggett & Myers Tobacco Company, and his wife Anne Parker purchased the lots at 1506 Hermitage and constructed the grand, Colonial Revival-style house about 1924.  In the 1930 census, their three children Hugh E. Jr., Sallie F., and Annie M. are listed, as well as a servant named Annie M. Sharp.

In 1933, the Whites sold the house to Claude M. Flowers and his wife Mary Whitaker, who moved with their children from 1005 Monmouth in Trinity Park. The Flowers name has a long history in Durham, as his father Col. George Washington Flowers was a trustee at Trinity College; William Washington Flowers was chairman at Liggett & Myers - buildings on both Duke campus and the L&M factory bear the Flowers name.  Claude followed his father, graduating from Trinity in 1909, then into the tobacco industry, working first for Liggett & Myers and later founding the Flowers Brothers Leaf Tobacco Company.

This large, two-story Colonial Revival-style building has wood siding and a slate roof.  The main house has a fanlight and leaded glass sidelights under its arched entrance porch, which has an exuberant Adam or Federal style, including fluted columns, an entablature with modillions and dentils, and an architrave with triglyphs and metopes.  The level of detail put into the classical elements of the porch, along with the artful balance of the home’s exterior elements (door, windows, downspouts) that carefully mask the fact that it is not quite symmetrical, demonstrate the mastery of the architect, which may have been Arthur Cleveland Nash.   Many grouped, nine-over-one windows light the house, and arched windows sit in each of the dormers to give light to the attic.  To the rear of the house, a 1940s garage has been recently repaired and a charming playhouse still stands - originally built by the Flowers family for their little girl Mary [sic - *see note below] in the 1930s.

The interior of the house is built on a double-pile (2 rooms deep) I-plan (center hall). On the left, the formal living room features an original fireplace with fluted pilaster supports and reeded decoration, also an Adam-style detail, and bookcases that were added in connection with the filming of “Once Around.”

To the right of the entry, the dining room retains its original painted wallpaper with a chinoiserie bird scene.  Before leaving the dining room, take a moment to examine the housing for the radiator built into the wall.  These fixtures still supply heat to the house. Beyond the dining room is the kitchen, which includes the cabinets which originally were part of the butler’s pantry and breakfast nook.  The kitchen was last remodeled immediately after the movie production wrapped, using the rental fees; another remodel is coming this summer.    While you are in the kitchen note the landing for the narrow service stair.  It joins the main stairway at its turning so that the servants’ use of the main stair would be invisible to family and guests on the first floor.  The original servants’ bath and the laundry have now been converted into a guests’ bath and powder room.

Upstairs, there are four spacious bedrooms and three baths.  The two original bathrooms divide the pairs of bedrooms.  Each of these contains much of its original 1920s tilework and fixtures – note the rounded end of the corner tub.  The third bathroom is located in what was traditionally referred to as a sewing room or trunk room.  Behind the bedroom on the northwest corner of the house is an original sleeping porch.  A similar porch was added on the northeast corner when the kitchen below was updated and enlarged in the 1980s.  The narrow stair ascending from the second floor hallway leads to the attic which once contained quarters for one or more servants.  There is a lovely, tiny clawfoot tub tucked into one of the front dormers.  Over the years, sensitive updates have been made throughout, but the house remains remarkably intact and definitely well-loved.

[*as pointed out by a descendant in August 2021 and confirmed in the 1940 census, the Flowers' lone daughter was named Sarah Frances - not Mary]