408
West Geer Street
Durham
NC
Year built
1948
Architectural style
Streamline Moderne
Construction type
Masonry
Brick
National Register
Foster and West Geer
Neighborhood
Central Park
Use
Auto Dealership
Building Type
Industrial
Can you help?
You don't need to know everything, but do you know the architect?
Log in or register and you can edit this.

One of my favorite mid-century modern buildings in Durham is the former Weeks Motor Company / Hutchins Auto Supply building. Built in 1948, Weeks was started by Albert Weeks, who ran a service station at North Durham Five Points (Little Five Points) in the 1930s and 1940s.

The Weeks Motor Company sold Lincoln and Mercury vehicles; per one of my sources, they would hide the new models in the DAP until the day of their release.

In the 1950s, Weeks moved across W. Geer St. to the former Durham Baking Company building. The original building served as a used car dealership for Weeks until 1962, when it became Hutchins Auto Supply. Hutchins appears to have operated here through the 1990s, closing by 2000. 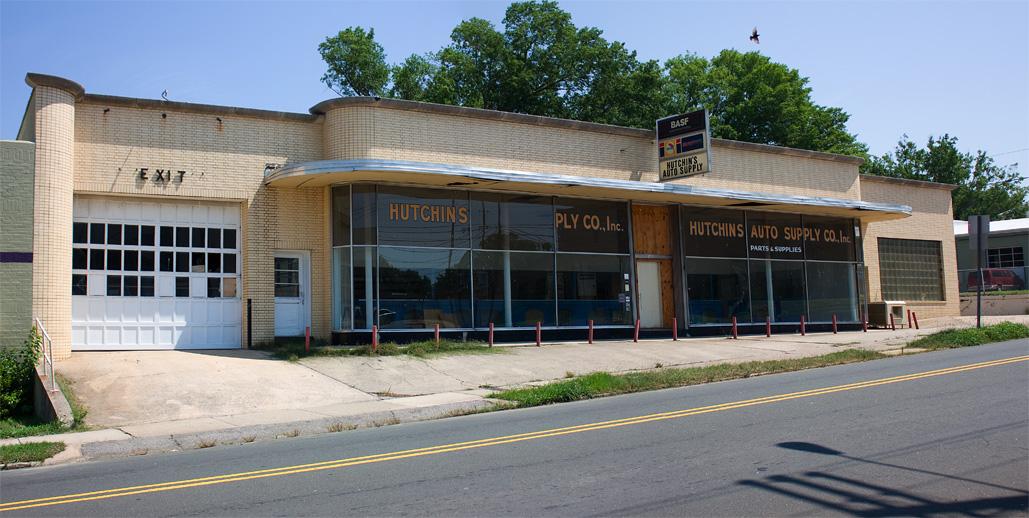 This is yet another in a great collection of mid-century modern buildings in the Central Park area. The state of many of these buildings, and the speculative nature of the real estate acquisitions in Central Park, worry me greatly for their future. Durham does not have a lot of good mid-century modern structures; my favorite, the bus station was torn down ~10-11 years ago. The Sears Building will be torn down soon for the Human Services Complex. I wonder if many of these will survive.

Built in 1948 as the Weeks Motor Company, which sold Ford, Lincoln, and Mercury autos, this large one- and two-story, flat-roofed brick building is a nearly unaltered example of the Streamline Art Moderne style. The rounded showroom façade allows the full display of the interior through a solid glass curtain wall, shaded by a rounded flat awning with aluminum cornice. Below the windows is a dado of black carrera glass. The recessed central glass doors have been replaced by a smaller door infilled with plywood. Side elevations of the main block have stepped parapets. The east elevation of the main block has awning windows. Recessed side wings flank the showroom. The west wing contains a large wood and glazed garage door marked "exit," with a curved wall at the outer corner composed of header bricks. The east wing contains an original glazed wood entrance door and a large window of glass bricks. The entire south façade, including showroom and wings, has a yellow brick veneer laid in Flemish bond. A robust molded concrete cornice extends across the entire façade. To the east is a five-bay recessed wing with the same yellow brick veneer containing four wood and glazed garage doors and a single pedestrian entrance. Most openings on the wing and the side elevation of the main block have soldier course lintels. The automotive entrance bay, a wood and glazed garage door, is located in the east wall of the main block just in front of the recessed east wing. The rear elevation is a single flat wall containing thirteen metal awning windows, all now covered with plywood. A few feet behind the rear elevation, a stone retaining wall demarcates the rear boundary of the parcel.

The showroom retains four round metal posts that support the roof along the front wall and along the rear wall. The wooden parts counter for Hutchins Auto Supply is still in place across the rear of the former showroom. The showroom floor is covered with linoleum tile. 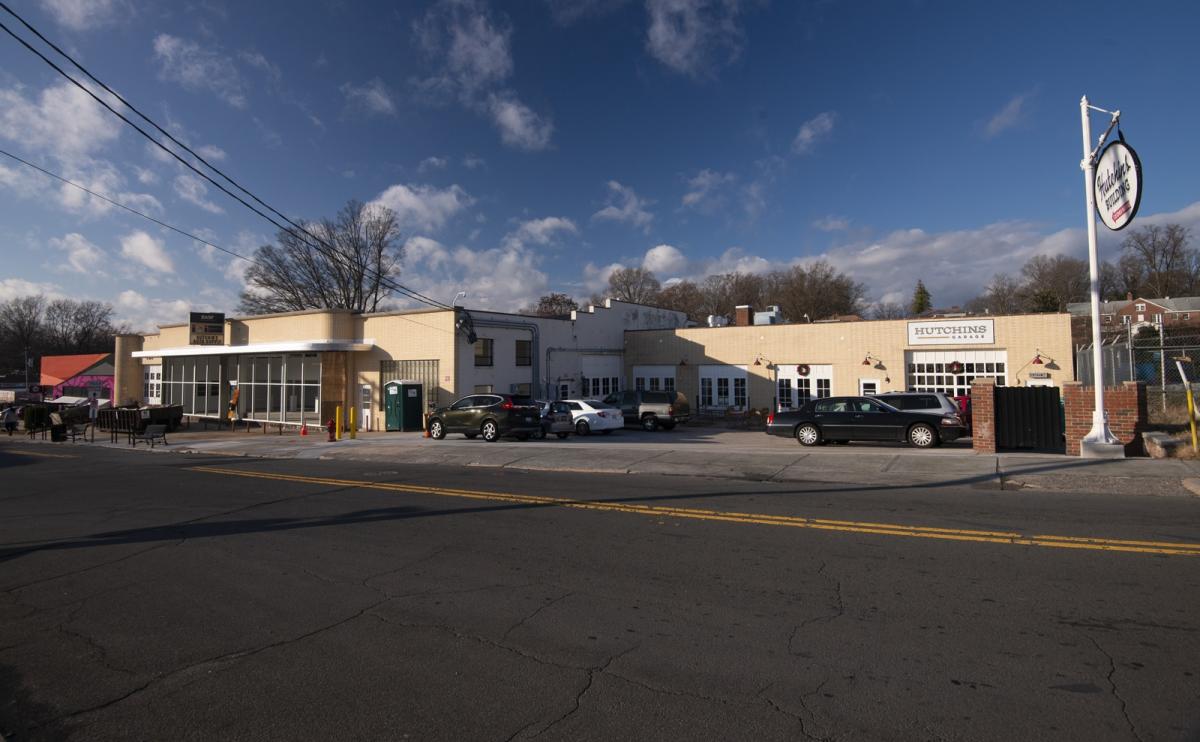 i am going to miss the sears building.

I've always had the ambition of buying/renting this building and opening a racing supply store, a la O.G. Racing in Reston, VA, but I've neither the time nor the money.

(I do, actually, have a real race car -- and there is a world class road course track about 45 mins. north of Durham, in Milton and another soon to open in Spencer.)

I love this building too- how about as a location for the new Durham Central Market?

Seriously. You're going to miss the Sears building? Not that I like what the County's doing there, but I won't shed any tears for that windowless block. Well, to each his or her own.

Kendra: that building is on our radar at DCM. Its chances will probably depend on this disposition of the owner -- right now it's listed as owned by James Hutchins, who I assume is the same Hutchins family.

If someone knows more about this building, they'd be more than welcome to pass me a tip... :)

The Weeks/Hutchins building doesn't look at all "mid-century modern" to me. It looks in fact quite art deco.

I'd call it Streamline Moderne, if we need to get technical, which is a branch of art deco. So you're right, in fact.

In some digging, I discovered that this building was bought by Hutchins from a company called "Appliance & TV Center of Durham," deed book 290, page 280, in 1963. This of course makes me think that business was in this location between the car dealership period and Hutchins' ownership.

The Hutchins business was owned/operated by Mark Hutchins whom I believe to be the son of the owner who started it. He got into the real estate business back in the late 90's. I believe that I remember him saying that he had sold the business. I don't know about the buildings.

Mark's e-mail: mhutchins2@nc.rr.com
He's in R/E, so that e-mail is advertised all over.

The Herald-Sun newspaper reports that the City Council approved an economic development grant to support the renovation of this building:

"Monday’s vote pledged $70,000 each to projects backed by Hutchins Properties LLC and Atlas Foster Real Estate Holdings LLC. The leader of the Hutchins project, Mark Hutchins, intends to spent $407,884 to renovate 408 W. Geer St., a former auto-repair shop. Dick said the repaired building could be made 'available for restaurant use.' "