The original main building of Trinity College, home to offices, classrooms, and dormitories, Old Main's belltower sounded the changes of classes and other important events. The building was beset by tragedy at its beginning and end, but during a brief ~two decades was the heart of the campus 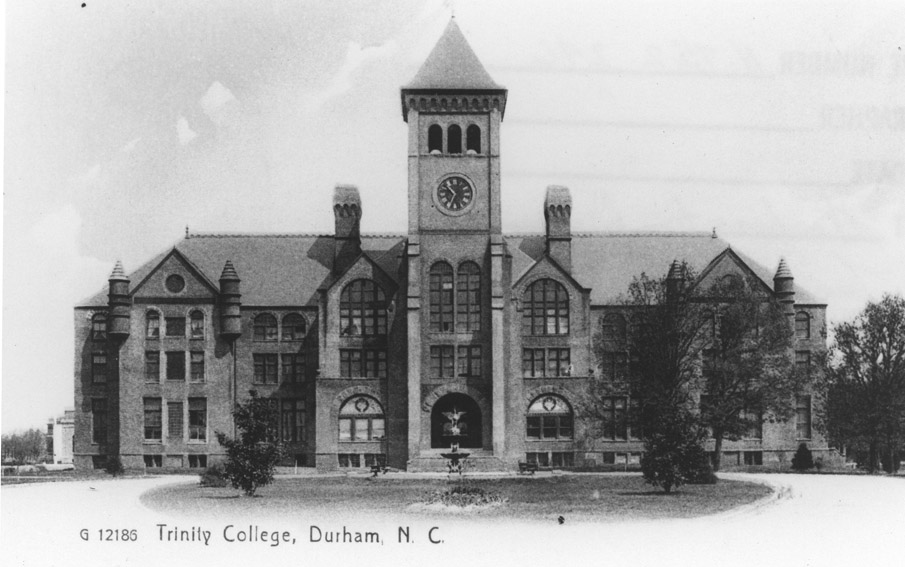 Samuel L. Leary was chosen to design the Main Building of the Trinity College Campus, later known as 'Old Main' or the Washington Duke Building. Leary, originally from Philadelphia, was one of Durham's early prominent architects, responsible for the design of St. Joseph's AME, the original Fire Station #1, the First (white) Graded School (later Morehead School), and the Foushee House (now Camelot Academy on Proctor St,) and his own house, the Leary-Coletta House on Cleveland St. Leary is also rumored to have designed the classic Durham form of the tobacco warehouse, first demonstrated by the Walker warehouse, but this is unsubstantiated.

CH Norton, who had built the Durham County Courthouse and the Fuller School was chosen as the contractor. The design was a 50 foot by 208 foot building with 12 lecture rooms, offices and labs on the 1st floor and in the basement and 60 dormitory rooms on the 2nd and 3rd floors. A clock tower was to extend an additional story over the front facade. The cornerstone was placed on November 3, 1890.

The building was to be completed for the beginning of the Fall Term, 1891. Concern mounted about the rapid schedule, and Crowell issued a statement to allay fears that the clock tower was unsafe. Exactly one week later, the clock tower of the nearly completed building collapsed, destroying 2/3 of the facade, the roof of the building, and the tower itself. The design was evaluated by WJ Hicks, a Richmond architect who had designed the Gothic Central Prison in Raleigh. He found defective masonry, and that the sides of the base of the archway below the tower were insufficiently buttressed to support the weight of the tower. Hicks replaced Leary as architect and Norton stayed on as contractor.

Although the historic inventory points out that Leary designed the Foushee house and St. Joseph's AME after this incident, there seems little doubt that this harmed his reputation, as - those commissions aside - Leary seems to fall off the face of the planet by the turn of the century.

The building was completed for the Fall semester of 1892, and the college moved to Durham. 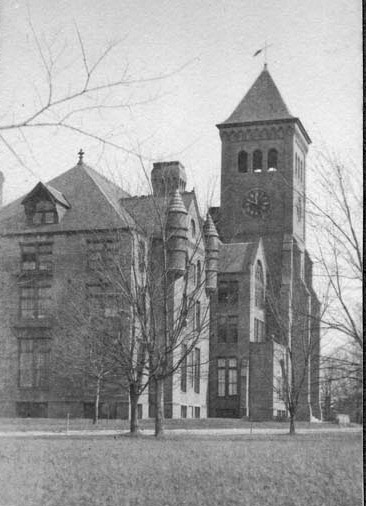 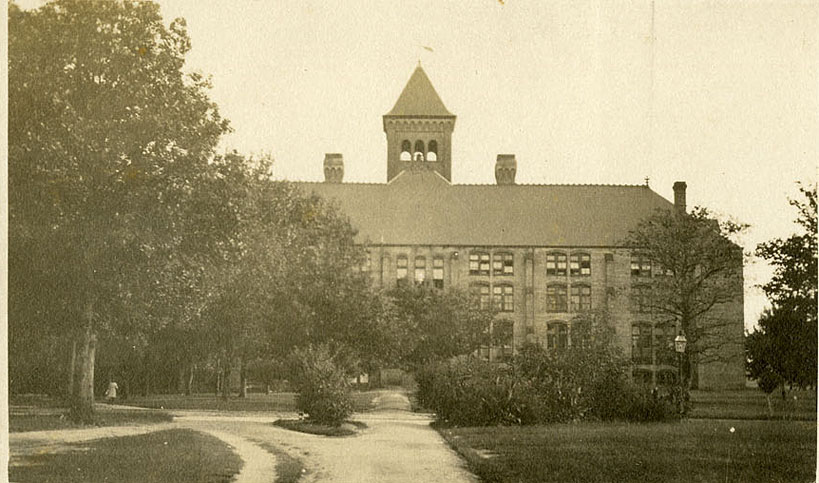 Rear of the building, looking south, 1909

The Main Building was renamed the Washington Duke building after his death. It was the center of academic life for the college, as recollected by Gilbert Rowe in 1915:

"The old Washington Duke Building stood for 19 years and came to a spectacular end by fire. It had, however, served its generation and was about to be removed to make way for the larger building which now occupies a part of the site. This building began to affect the life of the college even before it was occupied, for it was the falling of the uncompleted tower that delayed the removal of the college for a year.

As I remember my college days, I am spared the conflicting emotions of many other students, because my life as a Trinity man began with the history of the college in Durham, In 1892 late in the afternoon of the day before the new college was to open, a crowd of students landed upon the campus. Although my roommate and I had acted upon the advice of the authorities and reserved a room early in the summer, we were unable to find out where that room was and were quartered for the night in the old Inn. As I lay upon the bed that night and looked first upon the bare walls and then out upon the campus, dotted with scrubby oaks and lettered with scantlings and piles of plaster. Little did I think that this campus finally would begin to feel more like a home than any other place, or that it would ever assume the beautiful aspect that it presents today.

The next day we learned that we had been assigned number eleven in the Duke Building, All the dormitories in this building were built upon one of two plans. Some of them were small, while others were more commodious and had a sleeping apartment cut off by a low partition. During my entire course I remained upon the second floor, although I changed rooms several times. All of the rooms were comfortable and substantially furnished; but although bowls and pitchers were provided, most of us preferred to repair early in the morning to the common bathroom where we could splash at will. The heating arrangement was the source of greatest annoyance. In extremely cold weather all the heat went to the south side of the building, and when the south wind blew, those on the south side roasted.

The Duke building was a long rectangular structure built of red brick. On the top and toward the front was the tower with its large, sweet-toned bell, which not only struck the hours, but served as a bell by which the janitor announced the engagements of the day. The day began with the rising bell.

The Duke Building was at the time the most important upon the campus, the only important public events taking place elsewhere being meals and chapel exercises in the Inn. It contained the president's office, the library, the society halls, a parlor. and practically all the recitation rooms, as well as dormitories lor about half the student body.

Life in this building was made up of some study, some amusement. and a great deal of social conversation. Practically all of the students gave some attention to books and recitations, though doubtless when they learned that the records had perished in the burning building, many found it difficult to lament over the loss."

By the latter part of the first decade of the 20th century, the college had already outgrown the building, and plans were developed to replace the building. Before that could happen, the building burned on January 4, 1911. 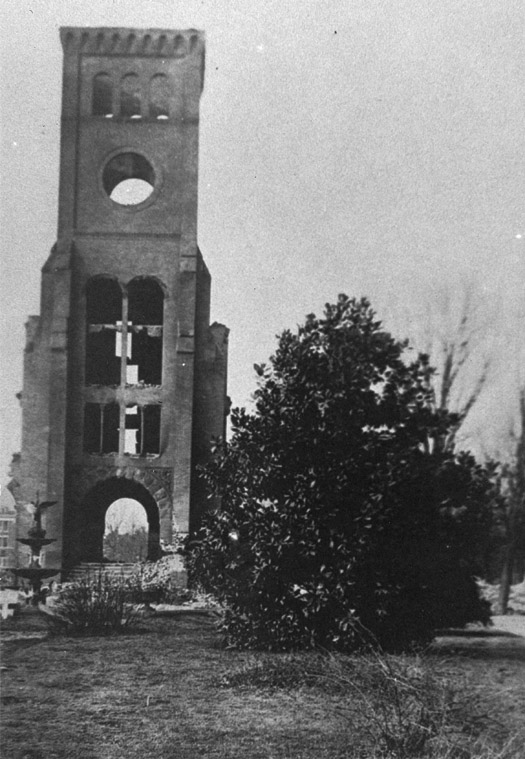 Looking north, with the Anne Roney Fountain in the foreground. 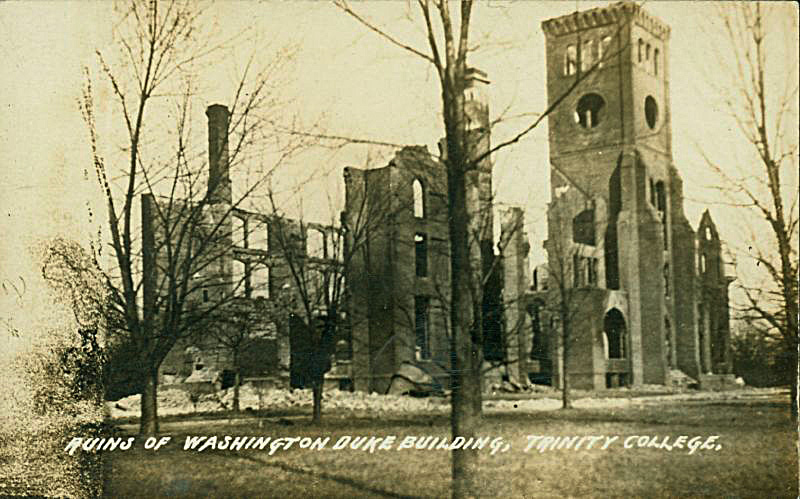 Ruins of the Washington Duke Building, from a postcard, looking northeast. 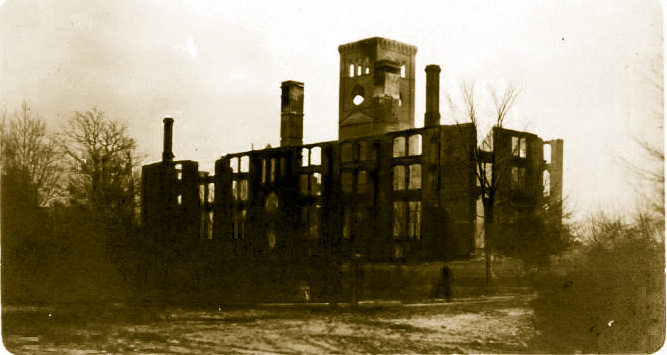 The building was torn down soon thereafter, and the East Duke Building was built close to its original footprint.