700
Washington Street
Durham
NC
Cross Street
West Geer Street
Year built
1967
Construction type
Masonry
Concrete
Neighborhood
Central Park
Downtown West
Use
Feed Store
Garden Supply
Building Type
Commercial
Can you help?
You don't need to know everything, but do you know the architect?
Log in or register and you can edit this. 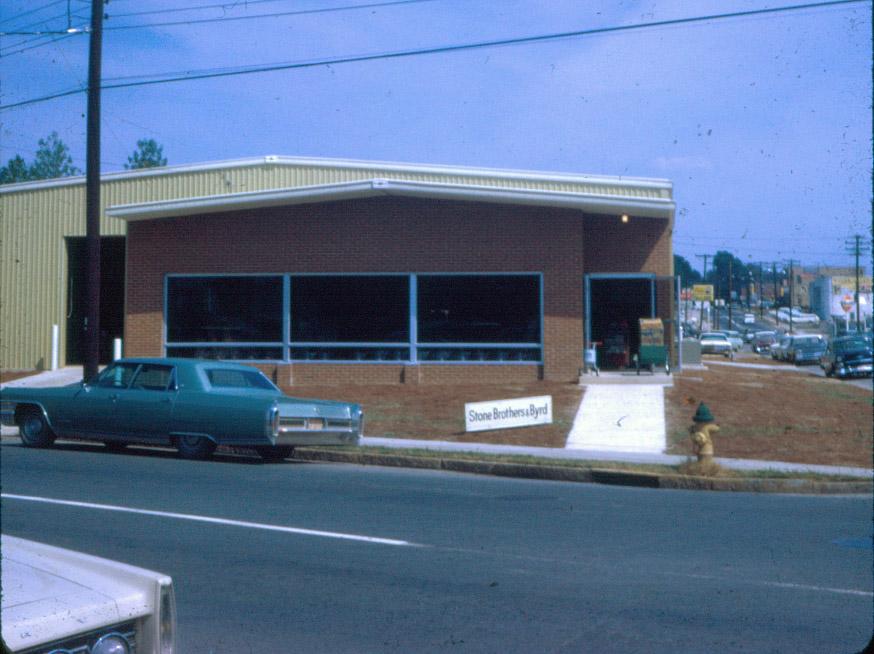 By 1940, the Byrd Brothers had gone out on their own and teamed up with a Pickett - becoming Byrd Bros. and Pickett - "Field Garden and Lawn Seed" - located at 211-213 Morgan Street.

Remembering the old days, at the age of 83 Mr. H. R. Byrd in 1977 said, "We sold wagons and buggies, harness, mowing machines, churns, stoves, harrows and a lot of supplies for the garden and farm. We would swap merchandise for corn, wheat and chickens. We handled a world of country meat, wheat, oats and eggs."

The evolution from Byrd Bros. and Pickett to Stone Bros. and Byrd isn't clear to me, but by 1963, Stone Bros. and Byrd was operating in the same location on Morgan St. With the impending loss of their buildings to urban renewal, the principals - Robert M. Bullard, C. Hamilton Jones, and RL Garrard - acting for Stone Bros. and Byrd, acquired the land on which their current building sits in 1967 from Louise Montgomery. Prior to 1950, this parcel contained two small houses, likely rental housing.

By the late 1960's, a modern facility was built to accommodate the expanding needs of customers and offered drive-through service, which allowed farmers to pull their trucks into a loading area. Every aspect of the buying experience was thought about by the astute observers of retailing science when planning the new location, from chairs being provided for customers in the sales room for resting and conversing, to accomodating the changing demographic of shoppers. "A thing we kept in mind when planning our location is that women are doing more and more of the shopping in our line of merchandise, and we wanted our place to be attractive and convenient for them to come in and shop," said Mr. Robert Bullard in March of 1969 as quoted in Feedstuffs, a weekly newspaper for agribusiness.

The reins of Stone Bros. & Byrd were transferred in 1976 to George Davis, a consummate "gentleman farmer" with a strong knowledge of horticulture and an uncanny ability to connect with customers. "George Davis posts himself at the threshold of Stone Bros. & Byrd, his old-fashioned lawn-and-garden center near downtown, eager to meet the "dirt people." That's what he calls his loyal customers, the ones who come into the 85-year-old store and are greeted by name. He seems to know their lawns even better," sa[id] Kaitlin Gurney in The News & Observer in November of 1999, after George and Stone Bros. & Byrd earned the Outstanding Downtown Merchant of the Year award for Durham, NC. "It's his combination of service, knowledge and ingenuity that earned Davis..the award. He knows his customers by name and identifies market niches" the article states. "Country hams and sausages hang from the ceiling next to jars of old-time candy sticks and barrels of homemade molasses. Large wooden bins full of vegetable seeds line the walls. In the spring, seeds are sold just as they were when the feed store opened 85 years ago. But in the adjoining room, exotic hothouse plants are nurtured next to build-it-yourself pond kits and the latest in fertilizer technology," says Gurney.

Stone Bros. and Byrd is one of the few 'old-line' businesses continuing to operate in the same 0.5 mile downtown Durham radius in which they originated, and retain a loyal following of long-timers and newcomers alike. 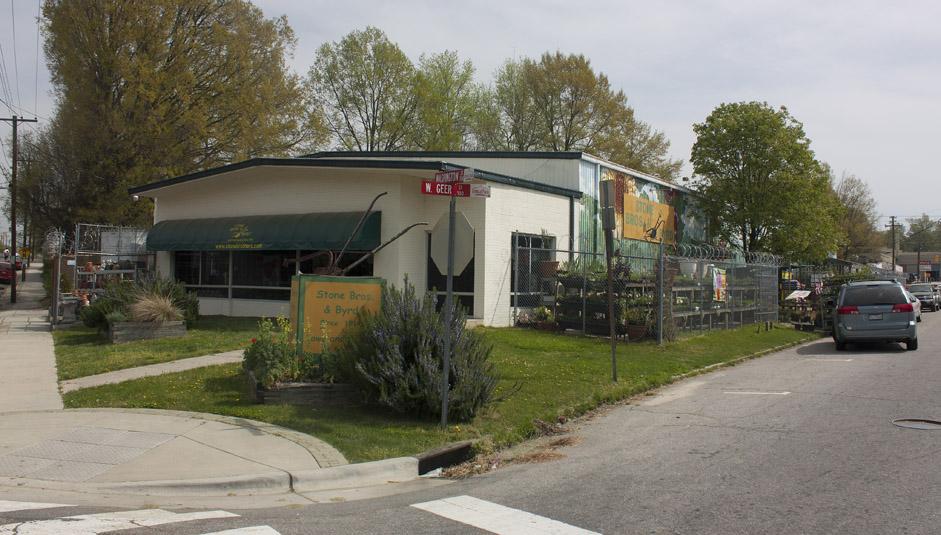 Note that the architecture isn't much to look at, but it is perfectly acceptable, functional, typical 1960's era construction. What is amazing is that in an era where businesses were demanding huge parking areas to attract cars, Stone Bros & Byrd's current facility has only a small gravel lot around the back, while mostly taking advantage of the abundant street parking around their store. I know I'm not the only one who lives within walking distance but often drives there because I don't want to tote 50 lb bags of topsoil/manure/mulch/etc. on my back.

Good customer service in a good location can be just as enticing (if not more so) and lead to just as successful a business as a sea of asphalt parking that never fills up. Honestly, has anyone ever remotely had any trouble finding a parking spot at a Home Depot, even on the nicest spring Saturday morning?

Again, Kudos to Stone Bros, and may your business thrive for many more decades.

Loved the smell of Stone Brothers & Byrd! I would go there with my grandmother and her quart mason jar to fill up with molasses. I would wonder through the isles looking at all the amazing stuff they had. They weren't too far from the original Bull Durham Ballpark. I remember a warehouse near there, also, where my grandmother got a few chicks for us to raise and there were antiques in one warehouse. This is one of the last family businesses that need to be supported since everything has gone 'Wal-mart'.