40
Beverly Drive
Durham
NC
Year built
1958
Year(s) modified
2000
Architectural style
Modern
Construction type
Frame / Masonry
National Register
Forest Hills
Neighborhood
Forest Hills
Use
Residence
Building Type
Residential
Can you help?
You don't need to know everything, but do you know the architect?
Log in or register and you can edit this.

The Stewart and Jane Alexander Jr. Residence. This ranch brick house has a 2-story center block, slab floor, a flat roof, a recessed entrance, and a 1-story left side wing.  In 2000 the house was sold to and renovated by Douglas "Casey" Herbert and Kathleen Bennett.  Carrboro architect Giles Blunden designed replacement casement windows and a latticework brick wall that screens the original carport at the left side. 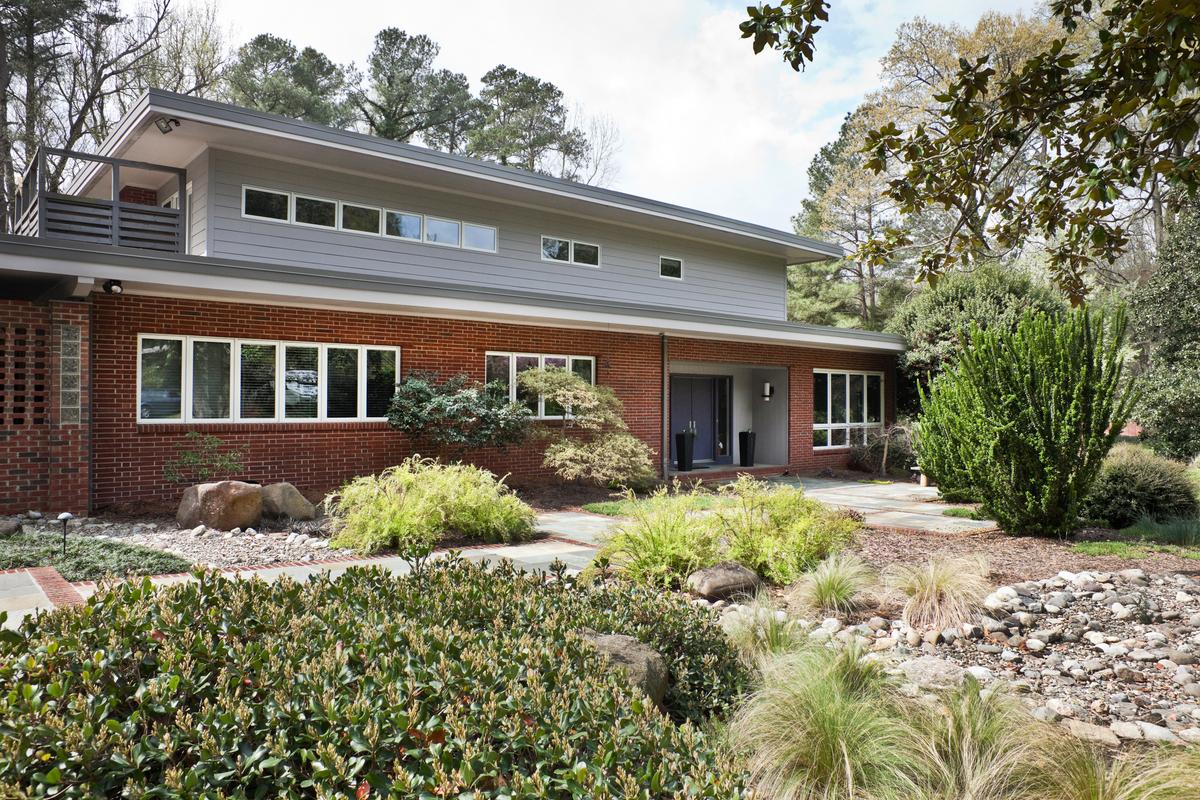 This house is a definitive example of post-World War II modernism.  It was built in 1958 for Stewart and Jane Cowan Alexander.  Stewart, the son of Parks Alexander, had grown up in Forest Hills, at 24 Oak Drive.  The Alexanders were partners in the Durham-based Alexander Ford car dealership, and the family lived here until 2001.

The Cowan Corporation, which was owned by Jane Alexander's family, designed and built the house, which exhibits many characteristics that define the post-war style: a long, low profile with simple geometric shapes and clean lines.  The ground floor is faced with red brick, which contrasts with the gray siding on the smaller second floor (original exterior siding color was Aqua - typical of 1950’s modern design tastes).  The roof of the ground floor sharply divides the two stories, extending the horizontal line to the east where it covers a carport designed to hold four vehicles.  Narrow rows of windows, a flat roof and the long, low profile of the chimney further accentuate the sharp horizontal lines.

The interior of the main floor was designed as one large open space, with a variety of materials and various floor levels defining the entrance, living room and dining room.  The entire lower level was originally painted aqua, featuring white carpet and aqua & white checkered linoleum floors surrounding the fireplace. The current homeowners worked with Chapel Hill Architect Giles Blunden in updating and integrating new materials, colors and textures into the original design.  Just inside the front door, the original floating staircase of natural wood divides the more formal areas of the house from family areas.  The current homeowners were required by modern safety codes to replace a too-low planter at the edge of the original stair landing.  To keep the space as open as possible, they installed a short length of wall integrating the large double-sided fireplace between the living room and the family room at the west side of the house, and added a transparent wall enhancing privacy from the front door.  Molded dark gray concrete tiles (by Chapel Hill Sculptor Andy Fleishman) now cover the original white brick fireplace and concrete terrace.  The large plate glass windows on the west side of the house are similar to those used in commercial construction in the 1950s, when the Alexanders also built a new automobile showroom.

Upstairs are four bedrooms.  The original dark paneled narrow hallway was widened to create an alcove entrance to the two central bedrooms and skylights were added above stairs for natural light.  The current homeowners also expanded the master suite by removing a wall to include a secondary bedroom as a sitting/hobby area.  The large master bathroom was remodeled with new steel sinks, glass and wood designed by the homeowner.  Off the master bedroom a small deck and French doors were added that lead from the bedroom onto the flat roof terrace extending over the carport.

As the upstairs bathrooms were updated, the homeowners decided to recycle original 1950s Robin’s Egg blue fixtures from the master bath and installed them in a new powder room on the first floor, once again integrating the old with the new in this house.

The gardens around the house have been extensively re-landscaped by the current homeowners to open up the house to its surroundings.  They removed holly trees that had almost completely hidden the house from the street.  The huge magnolia tree in the front yard was limbed up to create space for a mixture of plantings and walkways.  French doors from the family room lead out to a paved terrace defined by brick planters.  Sculptures by Virginia artist Jack Chaffee create an oasis between the house and the woods that separate it from busy S. Roxboro Street.

One final note of historic interest: the 1950’s wood and canvas double-sided lamp on the round, metal table in the downstairs living area was owned by the original homeowners and was a gift to the current owners from a neighbor.

Until the early 1920s, most of the land that comprises Forest Hills belonged to a few farmers who left much of the gen- tly rolling hills as forests and meadows. Scattered along the edges of the neighborhood are a few houses that survive as reminders of the area's early history. These homes were often very small- one room deep and one story high...
Read More

Jane Cowan Alexander was married to Stewart Alexander who was a Durham businessman and at one time owned what is today called University Ford (Alexander Ford when he owned it). Jane and her 3 brothers, Robert (Bobbie), WIlliam (Billy) and John (Jack) were raised in Durham (not sure where Tennessee came from).  Bobby and Billy were contractors of both commercial and residential properties. They also built a home for Jack and his family which is located near Apex NC, though they no longer live there. Stewart, Jane and all her brothers are now deceased though many family members are still alive, however none are believed to be in the Durham area.