This wing, apparently originally a single story building, has been raised to two stories by the addition

of a sunroom below the original structure. Paul M. Gross started teaching at Trinity College, later

1948, during Duke University’s evolution into a research institution, and later served as Dean of the

Graduate School, Dean of the University, and a Vice-President in the Education Division. His work on

Merit. The chemistry building on Science Drive at Duke University is named for him.

In 1930 Dr. Paul M. Gross was a relatively new chemistry professor at Duke when he and

his wife, Gladys, moved from Trinity Park to Hope Valley.  Their new house, in the English

Cottage style, was designed by George Watts Carr as one of the original “seed” houses

commissioned by Hope Valley’s developers, the Mebane & Sharpe Company.  In ordering a

house with a distinctly English feel, Mebane and Sharpe hoped to exploit the latest fashion in

home design and set the tone for future construction in the subdivision.

While most of the original Hope Valley houses were built in the Tudor Revival style, the

developers also built a couple of homes in the closely related English Cottage style.  The Gross

House is one of them.  Both the Tudor and Cottage styles look to English vernacular buildings

for inspiration.  But where Tudor designs draw  upon medieval precedence, English Cottage style

houses are influenced by the work of contemporary English architects such as Edwin Lutyens, C.

F. A. Voysey and M. H. Ballie-Scott.  These men sought to weave traditional forms into a new

British originals.  Unlike their Tudor Revival cousins, Cottage style houses have no half-

decoration is kept to a minimum and materials are used in a straight-forward manner.  Simple I-

plan and gable-and-wing plan designs are typical.  In keeping with cottage proportions, English

materials include undecorated brick laid in ordinary bonds, wide clapboards mitered at the

Originally, the Gross House was a modest three bedroom home arranged in a gable-and

-wing design.  The brick lower and clapboard upper siding combination is typical of the English

Cottage style.  On the front of the house, the separation between the two floors is accentuated by

the pent or visor roof.  A new wing recently added to the north side of the house also displays

strong Cottage style design elements with a hint of the Elizabethan in its massing and proportion.

The addition is so sensitively joined to the house that its original plan is still plainly visible.

arrangement of the original rooms.  The plan of the Perlzweig House is very similar.  The front

entry leads into a stair hall.  The interior decoration is in a simple American Colonial style.  The

doors are of the six- panel colonial type which was relatively new in the late twenties.  The stair

rail is supported by a delicately turned newel and spindles.  Off the hall to the right is a spacious

living room filling the width of the wing.  It was recently expanded by enlarging the house to the

rear.  At the south end of the room is an ornamental fireplace with a Georgian mantelpiece.

Beyond, to the left of the mantel is a porch, once screened, but now enclosed.  To the right of the

mantel is a study with its own small fireplace.

As in most old Hope Valley homes, the original kitchen space was too small to

accommodate modern living.  The current owners, Anne and Tom Niemann, have replaced it

Chinese Chippendale fretwork at the corners.

with a window.  This room has now been opened up providing extra light and space.  The master

bedroom is unusual in its asymmetrical ceiling.  Towards the east, the ceiling is slanted because

style.  Beyond the master bedroom, in the attic over the study below, is a finished room whose

original purpose is not immediately clear.  Could it have been intended to serve as a drawing

room?  A sitting area?  A sewing room?  In the front gable are two smaller bedrooms.  In each,

pitch of the gable roof.

When the Niemanns acquired the property, it consisted of an important, but relatively tiny

house in one of the most desirable locations in Durham.  In market terms, the generous lot was

seriously “under-housed.”  Where others might have glommed an unsympathetic addition on the

front of the house or, even worse, demolished it to start over, the Niemanns appreciated what

they had and set about to preserve it.  They significantly enlarged the house in a way that did no

violence to the original house.  The new wing contains living space for their children including

two large bedrooms and a separate stair.  On the ground level is a large screened -in porch

overlooking the spacious lawn.  To design the addition, the Niemanns selected local architect

Jane McGarry.  L. E. Meyers was their contractor.  Together the Niemanns, their architect and

their contractor, deserve much credit for their careful stewardship of this important Durham 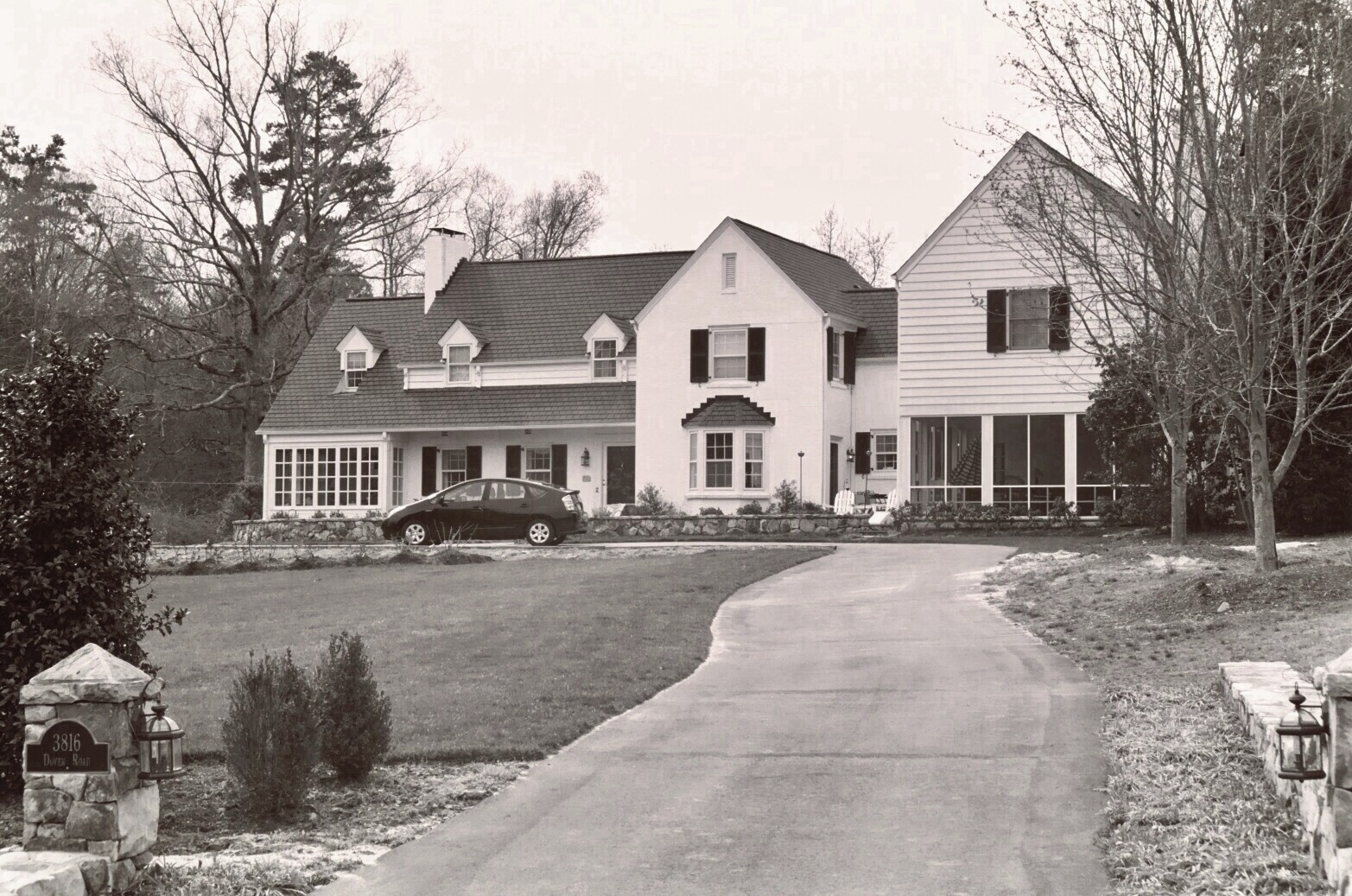