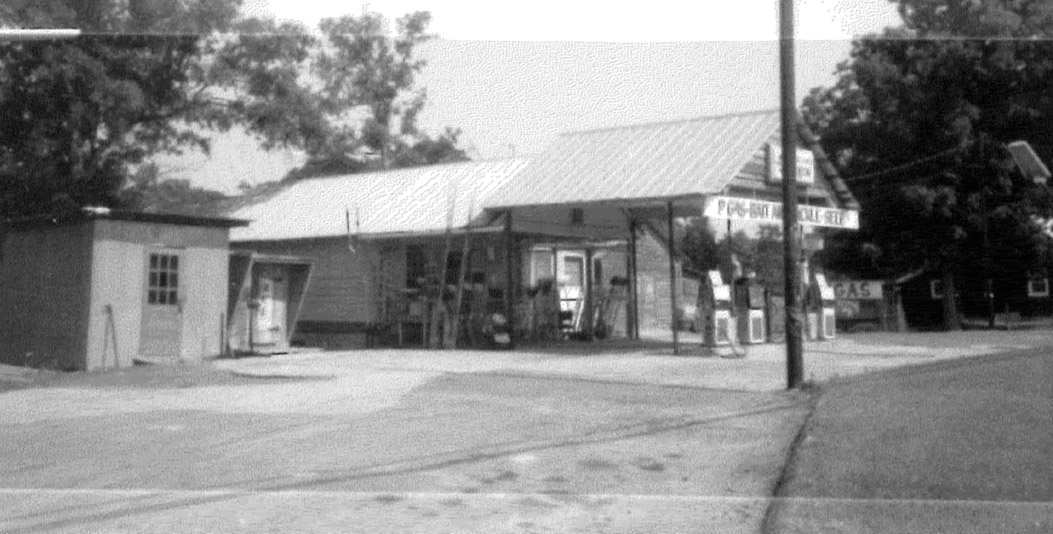 1988 SHPO proof sheet photo - negative DH2478 if someone wants to pay for a better copy from the negative and send it to me. 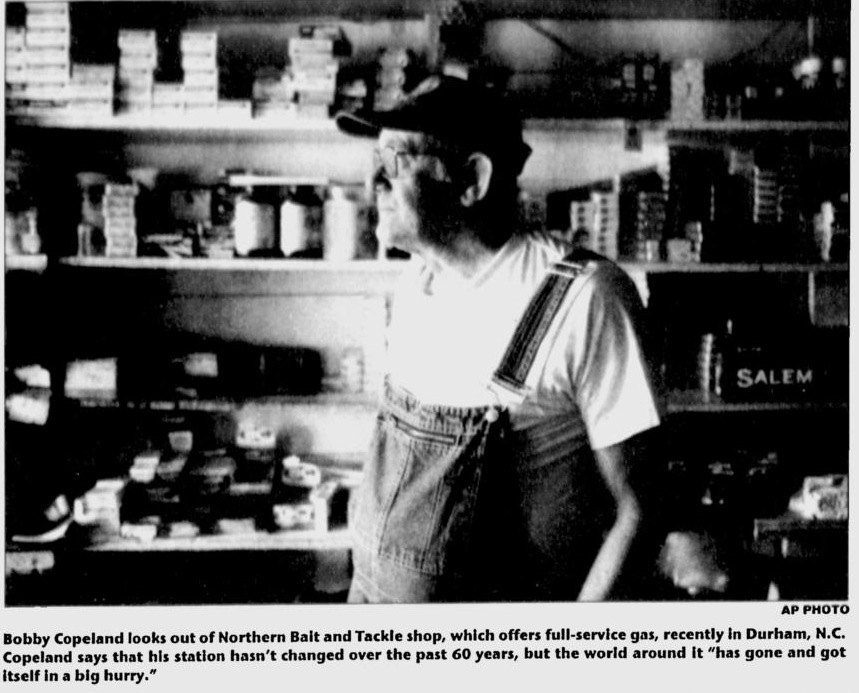 Bobby Copeland remembers clutching his grandaddy's hand in the corner gas station. He'd eyeball the candy rack while a group of local men would gather to chat about fishing.

When a car would rumble into the drive, the service man would lumber out, pump the gas, check the tires, and wipe the windshield clean.

Not much has changed in 61 years at the Northern Bait and Tackle shop and gas station on North Roxboro Road, except that the world around it "has gone and got itself in a big hurry," as owner Mr. Copeland puts it.

In an era kick-started by fast-food chains and pay-at-the-pump stations, Mr. Copeland's store steps back to simpler times.

"We full-service stations are a dying breed," the 66-year-old Mr. Copeland said. "We're about the only one left. Not many left in these parts anymore."

Occasionally, Mr. Copeland said, customers are surprised to see him step outside to fill their tanks.

"They tell me, 'Go on inside. You ain't got no business out here, old man.'" Mr. Copeland said, breaking into a body-shaking laugh, his bright blue eyes creasing at the corners.

A few miles up the road, shiny self-serve gas stations sit side by side. People speed in to fill their gas-guzzlers as if it were a timed Olympic event. They swipe their credit cards at the pump. They rush in and out of the sliding doors of the convenience store, clutching drinks and snacks.

Some convenience stores feature snazzy amenities, such as sandwiches, gourmet coffee, and cappuccino machines. But Mr. Copeland's store offers the basics: two pumps of gas, a fridge of Coca-Cola, and beer. The snacks range from a vinegar jar with homemade pickled eggs by the registers, bags of pork skins, and packs of Lance crackers.

Mr. Copeland's station sticks out from the line of shiny exteriors and multiple pumps. The station has only addeda few walls to the original log cabin and its wooden floor. And the service is the same.

When a car outside drives over the gas hose that triggers the clanging bell inside, Mr. Copeland stands up, fixes his tan ball cap and smoothes his blue overalls. He walks outside to attend to the car.

"I like it because it reminds me of growing up in a small town, where you knew the guy pumping the gas," he said. "I knew he'd let me know if there's something wrong with my car. Nowadays, the kid in the gas station doesn't know what's going on," Mr. Martin said. "Sure, they might call 911 if your car's on fire, but that's about it."

"I come in to get my gas, my bait, and some fishing advice," he said. "You can also talk about what's going on. It's a lot cheaper than a psychiatrist."

But Marsha Corrigan, who filled her own tank at the Amoco station up the road said she'd rather pay cheaper prices. Ms. Corrigan pays $1.49 for a gallon of Amoco's unleaded gas, compared to the $1.63 rate at Mr. Copeland's shop.

"I always pump my own gas," she said, inserting the nozzle into her minivan. "It's not hard, and it saves me some money."

John Jakle, a geography professor at the University of Illinois at Urbana and author of the book "The Gas Station in America," said self-service gas stations have evolved as a result of rising gas prices.

"Before, gas was so cheap with petroleum companies competing, gas stations emphasized service," Mr. Jakle said. "Attendants were snappily dressed and checked the oil with a smile."

"With the rise in gas prices, it's no loner the extra perks that get customers," he said. "It's the bottom line—prices."

But with the gas prices soaring skywards after the 1974 oil embargo, retailers jumped on the idea of self-serve gas stations to cut labor costs.

Except for New Jersey and Oregon, which still have laws requiring full-service gas stations, most states have been overrun by the self-serve gas stations.

Indeed, Northern Bait and Tackle went in 2006. In 2002, the owner was noted as Tom Ingram. I'm still looking for a picture of the building if someone can supply one. 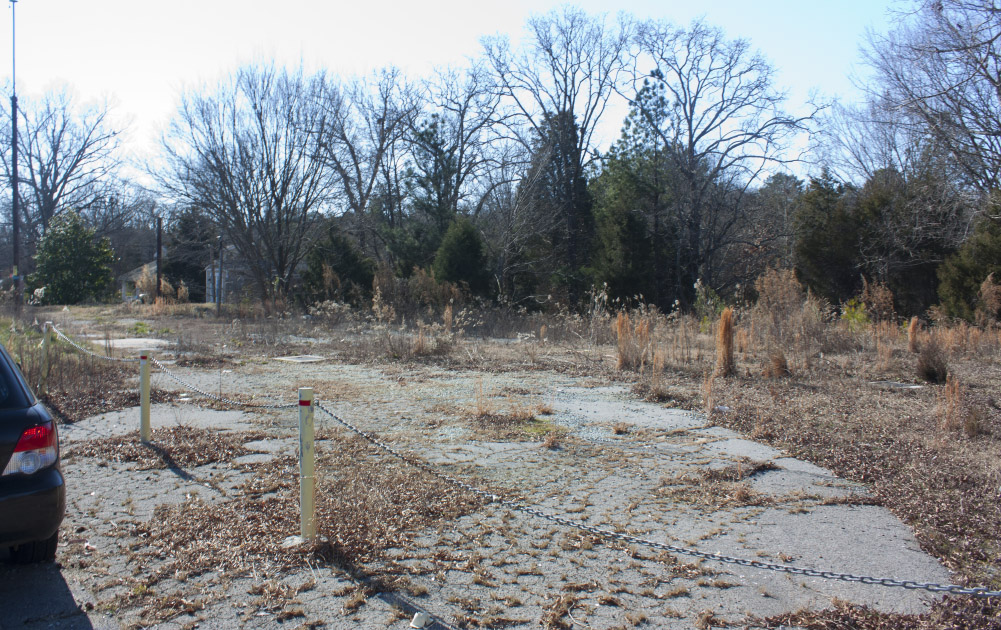 I remember this store. My daddy would get his gas and fishing

I remembered this store. My daddy would get his gas and fishing bait here. He wouldn't have to get out of the car, they would already pump the gas for him.