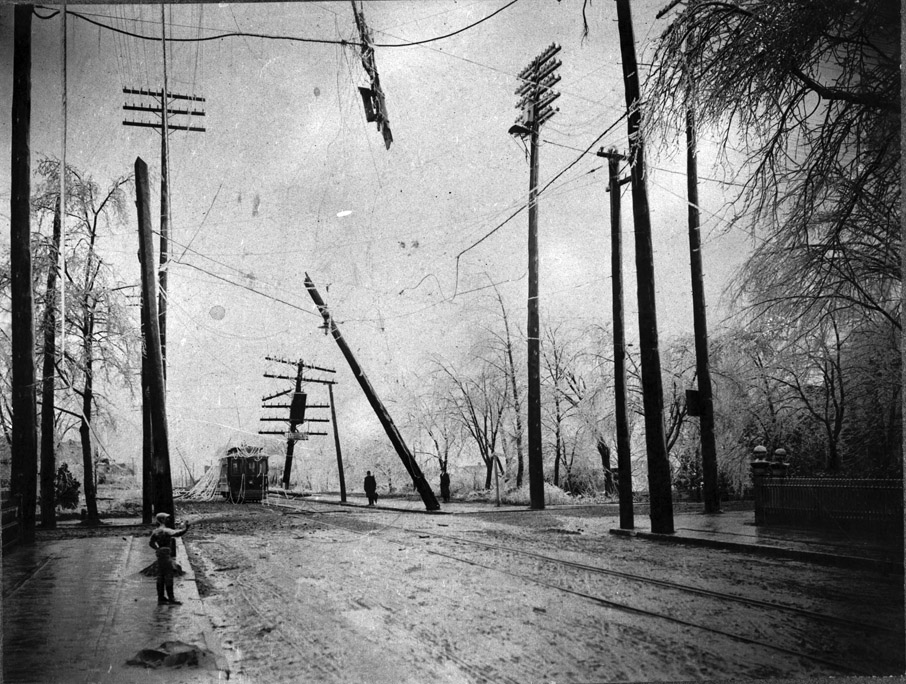 A toughie today. Probably around 1910, and probably Main or Chapel Hill Sts. I've added a companion photograph that I could identify to the Southern Conservatory of Music post.

Note: I now believe that this negative was flipped. Here is the horizontally flipped version 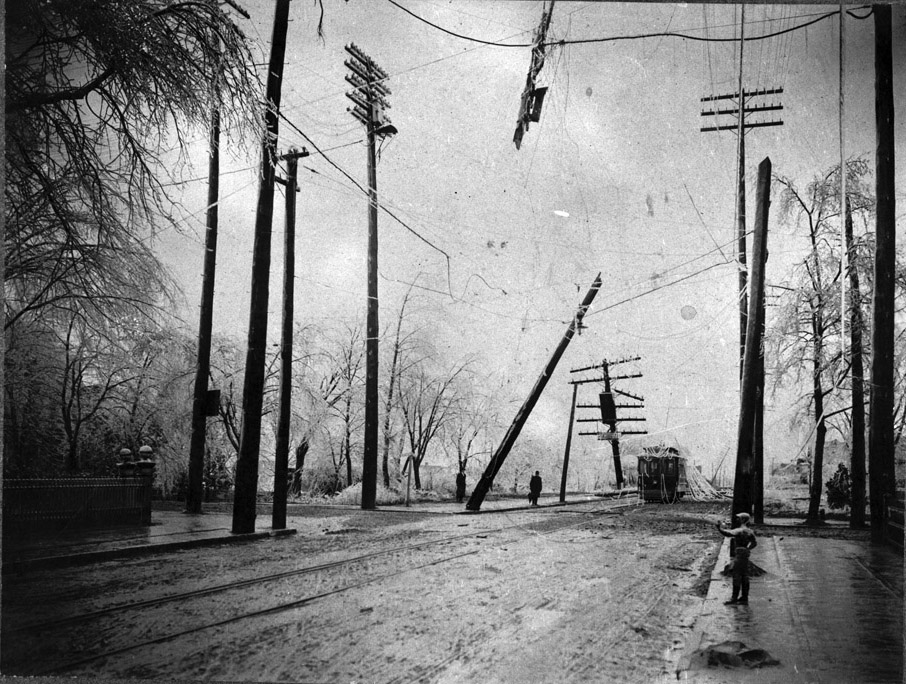 Is that the iron fence around

Is that the iron fence around the B. N. Duke mansion?

I believe this was during an

I believe this was during an ice storm.

That fence looks a bit the

That fence looks a bit the Waverly Place fence, but the dates don't match up. I don't suppose Carr kept the same fence up around Somerset Villa?

AAAA! Ice storm HELL!! Lawn jockey on the curb is an amusing touch...lol

This is from just a couple of

This is from just a couple of years back. You can see Bill Bell in the background looking for some Duke Power crews to fix the lines.

Andy - it does look like the Waverly Honor fence, but I can't reconcile the electricity/electric streetcar with that date. The fence around Somerset Villa was quite different. Could Carr have changed the fence ~12-20 years after he built the house?

Anon, in 1910 it wasn't a "lawn jockey" at all -- it was a functioning hitching post. Horses were still a major mode of transportation. As use of equine horsepower declined and automotive horsepower expanded, the hitching posts were moved away from curbs (where they no longer served a purpose) and were "repurposed" as lawn ornaments. Hilarity ensued, I guess.

Corner of 9th and Club? The

Corner of 9th and Club? The streetcar should be helpful, where is a map of the old routes?

That map is here. That line

That map is here. That line (up Broad) would have been established by the late 190X's for Watts Hospital, but there wouldn't be anything with that kind of a wrought iron fence around it out there that early.

I don't have a clue where it

I don't have a clue where it is, but I am amazed at the height of the taller utility poles.

Haven't a clue about the picture though.

Screams Chapel Hill St. to me, near Four Acres or thereabouts. Nothing to base it on, just the character of the street and the side roads.

It does look like Chapel Hill St., but that fence doesn't match that of the Terrace/4 Acres, Southgate Jones House, the north side of the 400 block of CH St., or the WT Blackwell house.

The faint distant building just above the street corner and to the right of the leaning pole in the center of the picture looks like it could be Carr Jr. High or Durham High School. Could that be a clue?

Okay, complete stab in the

Okay, complete stab in the dark here. When was the East Campus wall built? Could this be looking west down W. Main St., with the entrance to East Campus on the right?

I think I've solved it - I think the negative is flipped, actually, and I've posted it what I now believe is the correct way. I believe that this is the corner of East Main St. and Dillard St., looking east. The wrought iron fence belongs to the Fuller House, later the site of the bus station. EJ Parrish's house was across N. Dillard, but set a ways from East Main (because the planned northern lane of East Main was closed) so that I think you can just make out part of its bulk behind the trees. That open space would later be developed with the Franklin Court Apartments, and later still, Oldham Towers.

Sneaky, sneaky! I would have

Sneaky, sneaky! I would have figured this one out in five seconds, if it weren't for the old flipped negative trick :-)

Gary, supporting your contention that the negative was flipped:

I did a google image search for "lawn jockey" and found that almost all of the hitching posts of the style appearing in the photo are posed with their left arm extended. That matches the photo after flipping.

Just returned from a week in

Just returned from a week in Prague and enjoying their great electric tram system. Seeing this makes me wish we had never given them up here.