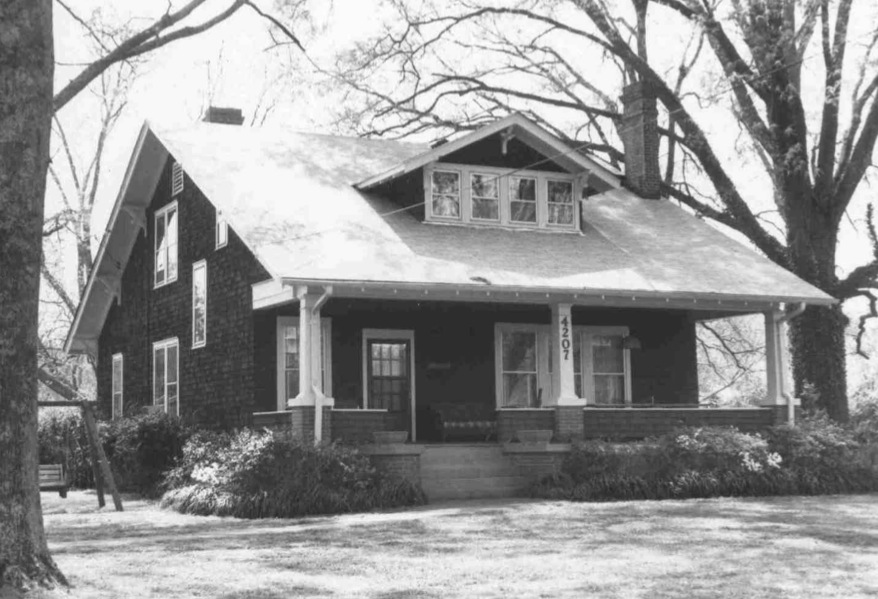 Directly across the road from the homeplace, Durham contractor Telphor Lawrence built a large and fashionable bungalow for Neal’s son, John, and his wife, Annie Lou, in 1921. The bungalow features such characteristic Craftsman details as a deep side-gabled roof that engages a spacious front porch, wood shingled walls, braced eaves, and a side bay window. The younger Neal was for many years principal of the Oak Grove School, but he followed the family custom of raising tobacco as a sideline.

Gary, I used to visit Fran

Gary, I used to visit Fran Thompson in this home. She was an early member of the Eno River Association and taught at Northern High School for many years, and I hope she is still in that house today. She told an anecdote of how the Neal farm, being much larger than the Bennett place, was the spot first considered for the negotiations of surrender between generals Johnston and Sherman. However, the Neal fields had already had their spring plowing and were uneven and muddy. It was Henry Neal's land in those days, and the old homeplace across the road was built by his son William Neal. There is a wonderful plat, circa 1950, in Durham County deeds registry that shows the considerable extent of the Neal place. Across this plat, numerous parallel roads follow the ridges between the Neuse and New Hope watersheds. At the north is the Fish Dam Road, once a major east-west corridor. The North Carolina Railroad right of way splits the original Neal land as does several iterations of the Hillsborough and Raleigh road. Wade Hampton made his headquarters in the Alexander Dickson house, which in those days stood on this same road about six miles west (on the site of the Walmart parking lot on NC 86 at I-85). Early in  the automobile era, this section was part of the Central Highway as organized in 1913 and soon designated North Carolina Highway 10. One tenet of the Good Roads Movement was to remove dangerous highway grade crossings at railroads, and the original path of NC 10 crossed railroad tracks five times between Hillsboro (as it was then spelled) and Durham. This was remedied with four trestles plus a bypass at the Bennett Place. The historic site has restored the earliest version of the Hillsboro and Raleigh road to resemble its appearance in 1865. At about the time NC 10 was renamed US 70, the bypass extending what is now Bennett Memorial Road was completed, thus going around the grade crossing on Neal Road near the school and likewise avoiding the trestle further east. In the late 1940s, a more extensive bypass was cut beginning closer to the NC 751 intersection, and the right of way was mapped for what would become I-85 about ten years later.  The plat for the William T. Neal Sr. farm is in Durham County plat book 22 on page 93.