A little field trip today out to western Durham County, near 15-501. 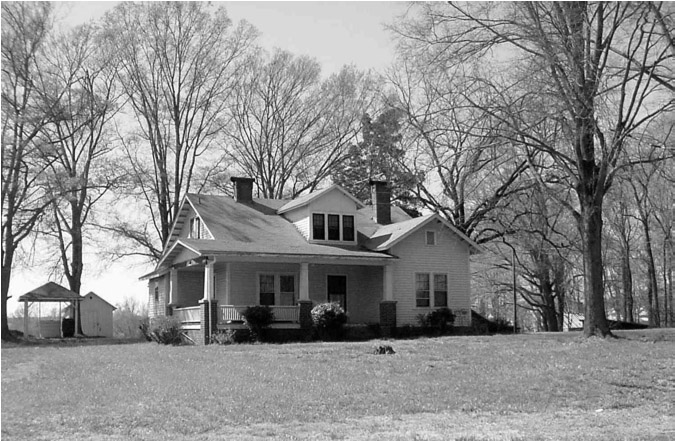 Clifton and Leah Garrett built their home and farm on 60 acres of family (Garrett) land in 1934. The bungalow was built by Mack Sims of Carrboro, and has several variations on the simple bungalow style: a wrap-around porch onto the south side of the house, and a front-facing gable ell off the north part of the facade.

The Clifton and Leah Garrett farm was one of dozens of farmsteads in the rural area between Durham and Chapel Hill during the early 20th century, many accessed along Pickett, Garrett, Mt. Moriah, and Old Chapel Hill Rds.

The boulevard to Chapel Hill was completed in the 1950s just to the south of this farm. 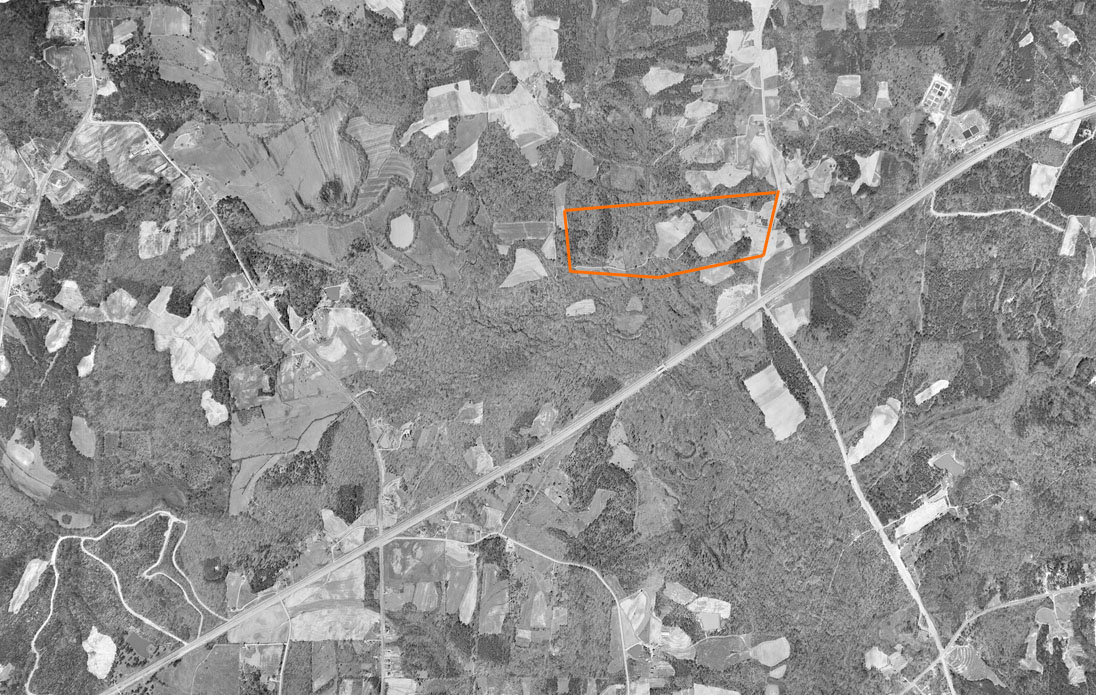 Growth along the 15-501 corridor and urban sprawl from both Chapel Hill and Raleigh have fundamentally changed the character of this area. Although the bottomlands of New Hope Creek just to the east remain undeveloped (and will likely remain so) land all around this farm has exploded in apartments and big boxy monuments to consumption. 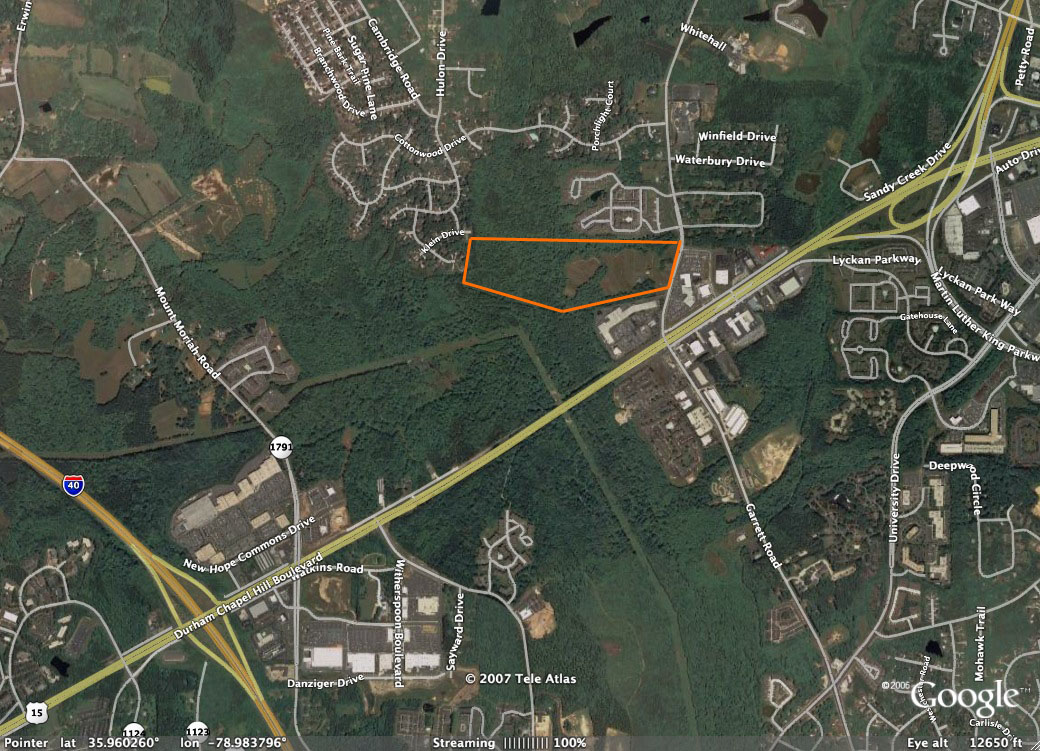 And this farm persists, essentially unchanged. 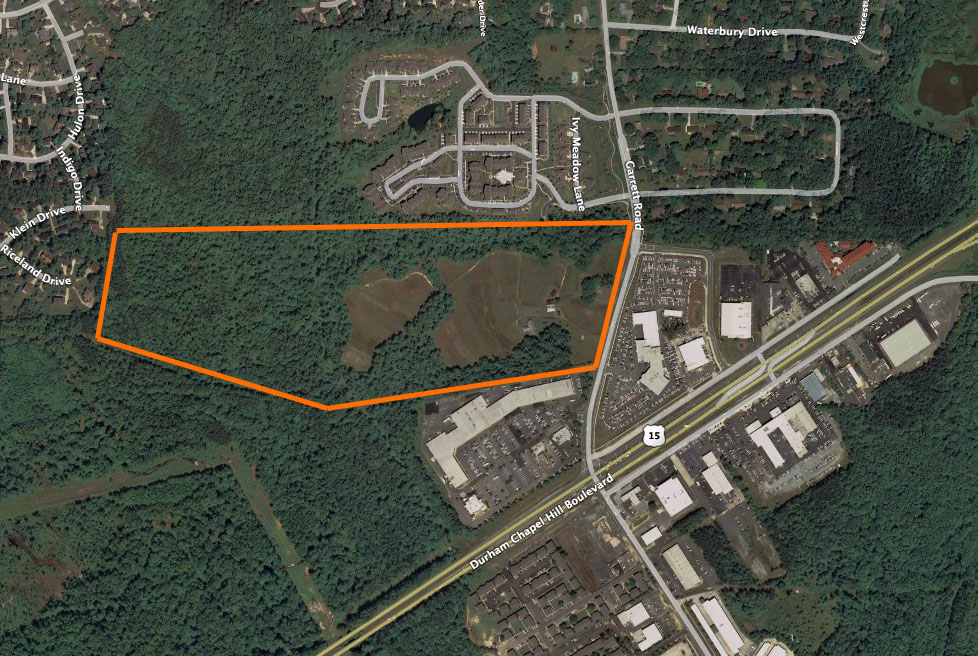 But not for long.

Trammel Crow Residential, which developed the Alexan Farms subdivision visible just to the north of this farmland, plans to build 308 apartments on the site of this farm. "Alexan Garrett Farms" would preserve 26 acres west of Mud Creek (wooded area adjacent to New Hope Creek) and an existing farm pond. The intersection of Garrett Rd. and 15-501 (and the adjacent section of Garrett Rd.) would be expanded to add more capacity for the extra traffic generated.

The developer would allow someone to cart off the historic house for free (at the cart-er's expense.) If that didn't happen in 6 months, the house would be demolished.

This plan was passed by our Planning Commission, 13-0. Because this requires a re-zoning, it will go before the City Council in November.

While development of this farmstead makes me sad, it seems somewhat inevitable in some form or another. I don't know when this was last a working farm, but it has been awhile. While I wish the Garrett family (who still own the property) had chosen to donate the land to the Triangle Land Conservancy, they didn't. The market value is likely far too high for any non-developer to afford it. I'd love to see someone keep this as a rural gateway to the New Hope Creek wilderness area/trail. But, again, that would have required the Garrett family accepted something less than what the market will bear.

I think it's a mistake for the developer to get rid of the house - not just from a preservation perspective. Clearly, I think an old farmstead like this is best preserved on site, and an offer to let someone take it isn't much of an offer. I'm surprised that the Planning Commission didn't do more to insist that the house - listed on our County Historic Inventory - was preserved.

But preserving the house on site and integrating it with the development makes good business sense. While it might require reconfiguration of the site plan, there is market value to imbuing an otherwise bland, repetitive development - particularly one with "Farms" in the name - with an actual farmhouse. It's been done before - even in Durham, with Bonnie Brae on North Roxboro. (Although it was moved away from the road.)

There is too little evidence left in southwest Durham of the life that once predominated the hills on either side of New Hope Creek. I hope somehow, some of this last little bit can be preserved.

House was removed - I'm not sure to where.

Too bad; I visited "old" Mr. Garrett in his retirement home years ago, and he was a real neat guy. His property has lots of archaeological/historical artifacts on it too; the old road to/from Fayetteville (a very deep cut), and several Native-American sites.

Hope not too much gets destroyed by the developer.

Great comments, Gary. A quick addition to your list -- the family farmhouse and Angus cows at the center of the Croasdaile Farm development at Hillandale and Carver. Nicely done and very tasteful, especially with the community walking trails radiating out from it.

My first reaction to this

My first reaction to this news was outrage -- not a single dissenting vote?? I want names! -- but perhaps I'm overreacting.

It definitely seems like yet another step in a Very Wrong Direction, long after citizens have started speaking out against the endless tide of Development At Any Cost.

I would like to know where I can find a list of the planning commissioners who were in on that vote, and also if there's anything that can be done to in any way preserve the farm.

Surely, for example, the zoning commission could require that the developer set aside a certain acreage (including the house and any particularly scenic parts of the land) as a park, to be developed at the developer's expense. Make these guys earn the big bucks they get from hacking up our forests into little parcels, planting McMansions on them, and driving up "property values" so nobody can afford to own more than a matchbox's worth of land anymore. (The mere phrase "property values" is enough to get my blood boiling these days.)

Ok, done with tirade. Ready to hear why this is actually a good thing...

I drove past that place every

I drove past that place every day on my way to high school, and yes, the character of that part of the world has changed immensely. Were it not for the creek and for Duke Forest, it would all be ugly f$^%ing sprawl. I can't stand it. It's why I don't want to live in Durham, ever again. It's simply ugly, the way sprawl has taken over. What happened to Garrett Road, to Pickett Road? My god.

What has happened to the

What has happened to the Garrett Farm Hous? Please email me as I am quite interested. ltgarrett@gmail.com

I am the granddaugther of

I am the granddaugther of Clifton and Leah Garrett. I grew up on the property. It really upsets me to see it go. I've put a lot of hard work into that property. I know I'm really going to miss it when it's gone. I can just imagen driving past it in 5yrs and the houses or the barns not being there.

I am the granddaugther of

I am the granddaugther of Clifton and Leah Garrett. I grew up on the property. It really upsets me to see it go. I've put a lot of hard work into that property. I know I'm really going to miss it when it's gone. I can just imagen driving past it in 5yrs and the houses or the barns not being there.

I fail to see how anything

I fail to see how anything good for this area can come from the proposed development. Could someone please tell me what the rationale is for ruining SW Durham
(besides,I assume,profit for the developers)? I am truly heartsick over what's happening to this area, and NC in general.

Gary-As of this past weekend

As of this past weekend (mid- July) It looks like the house is being prepared for a move. Do you know where it is going?

I actually live in the

I actually live in the apartments next door to this lovely old farmhouse. Actually, this home and the barns and the two large trees that are out front as well as the charm of the country roads around this area are a part of the reason I moved here in the first place.

I have felt a great sense of loss at seeing this home deconstructed...I was happy that at least the home might be used again by someone (since it appears to be ready to move). I hate the stupid Marc Jacobson Toyota dealership across the street. I find the plaza next door unsightly. And the apartments I live in (Alexan Farms) are just greedy for buying up this lovely plot of land and tearing down this house.

I would love to be able to help or protest or call people or ask for someone to PLEASE not allow this area to turn into my ugly urban sprawl...I'm from Florida, and I HATE most of Florida for what it is--URBAN SPRAWL...ugly strip malls full of cell phone carriers, nail salons, and grocery stores. I much prefer the charm of NC--or at least the area I knew when I first moved here.

If there is anything we can do...I would love to help. I find this wrong. This is a lovely place, and I don't want to see it change.

Gary, I haven't seen any

Gary, I haven't seen any updates on this property, but as of Halloween night, the house is gone and I don't know where it went or its final fate. The barns are probably a different story.

It is always astonishing to

It is always astonishing to me to hear people complain about development and accuse developers of being "greedy", then, promote regulations that would undermine the ability of those same developers to profit from the projects they have taken the time, effort and money to make into a reality. But those same complaining people never seem to feel the need to pony up the cash to save or preserve the properties that they claim to want to save.

If all of you get together, you could purchase up some of the farms out in the boonies that DO still exist and go live there in boonie bliss. As for this development, I for one look forward to seeing the sprawl. Seeing a rundown, abandoned farm and farmhouse is NOT beautiful. It is depressing and sad. If the farm were a working one, that grew pumkins or strawberries or raised chickens and goats, I would love seeing it in the middle of the city. But, noone wanted to take the time or put forward the capital to make THAT happen!
Give me a break!

With regards to the fate of

most recently its just a

most recently its just a giant trashpile

I'd much rather see an

I'd much rather see an abandoned farm than a parking lot and a strip mall.

Any idea where in Carrboro

Any idea where in Carrboro the house was moved to? At least it's good to hear that it was not demolished, even if its former context is gone.

Anyone that says they'd

Anyone that says they'd rather see the sprawl of yet ANOTHER development rather than an abandoned farmhouse is an idiot and should never be allowed to own property. You shame this area, sir.

I grew up near this place.

I grew up near this place. I'd walk to it to see if the horses were out. My best friend and I would bring them carrots and apples. I always loved the house and didn't know until this website that it was historical.