The northern portion of the site between Morgan, East Chapel Hill, Holland, and Foster Sts. was the site of a city market constructed around 1910. It is unclear if this market replaced the market that had been located in the Academy of Music or supplemented it - it is possible that when the "New Academy of Music" was constructed, the market was relocated to this location.

A couple of aerial photos of this area from 1924-5 are the only pictures I've been able to locate that shows a bit of the market building. 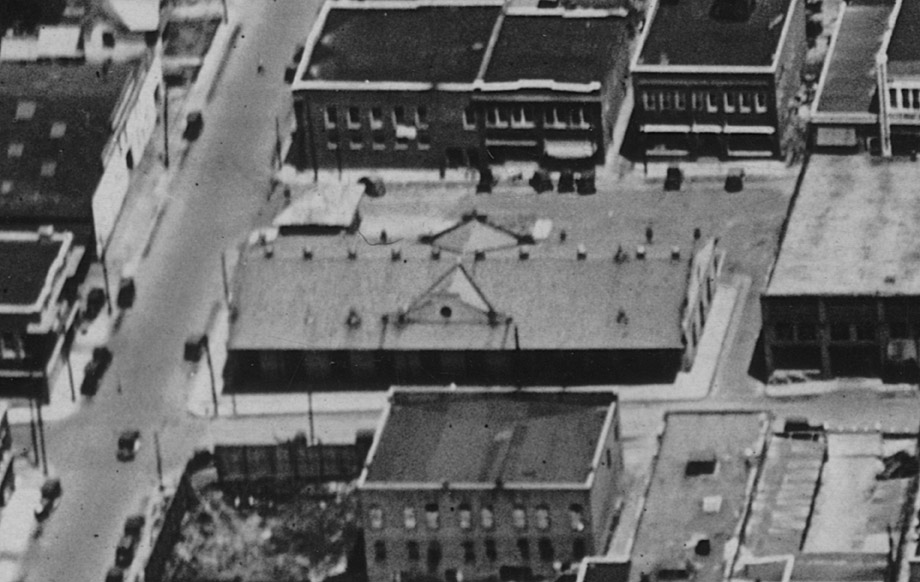 City Market, looking east, 1925. The city scales are the small structure to the left and behind the market building.

Below, a Sanborn map of the site from 1913 - oriented with west at the top. Watkins was later renamed Morgan St., and Ella renamed Holland. 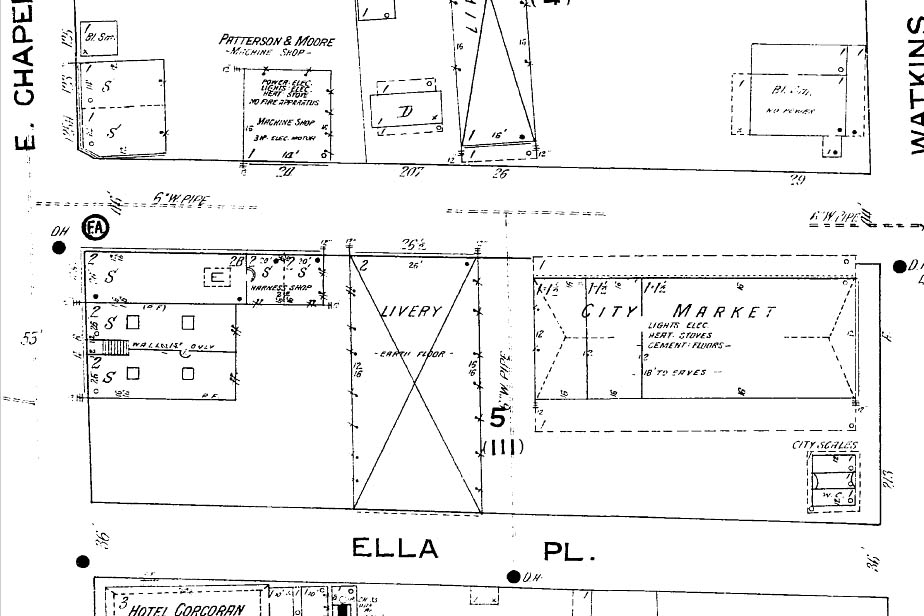 The Washington Duke hotel, under construction, is at the extreme left. The unique roofline of the DC May company is in the left background on Morgan, and the building at 226 Morgan is to its right (east.) Moving towards the foreground from that building, you can see the large roof of the market building, with an open air bay extending along the entire eastern facade (Holland St.) An interesting - almost Mission style - parapet appears to face Holland St.

From 1935 to 1937, the Durham Armory was built on the same site. It "incorporated elements of the city market", but it is difficult to say how much or how little was included. It was the headquarters for the National Guard in Durham. 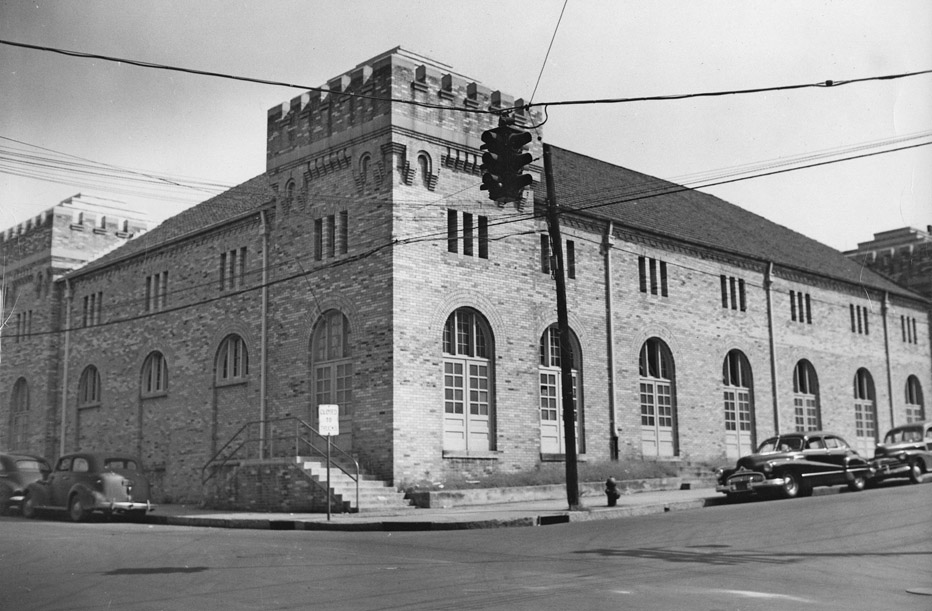 In the late 1950s, the National Guard built a new complex at Carroll and Lakewood Sts. The former site was converted to the Durham Central Civic Center. 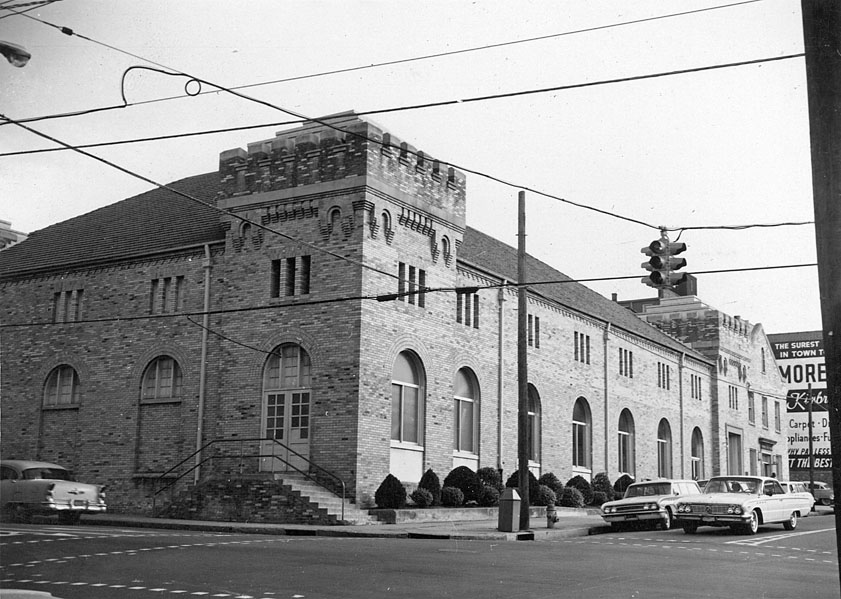 During the 1950s and 1960s, the armory was used for a variety of functions, including dances. Dances would be segregated in time - i.e., there would be 'Black nights' and 'White nights.' White people in their 70s have told me about getting in to sit in the balcony during the 'Black nights' because they wanted to hear the music. Once of these nights was the inspiration for Ernie Barnes' famous painting "the Sugar Shack." 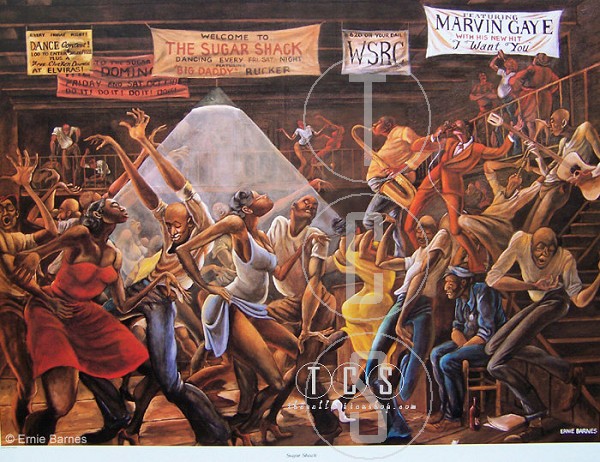 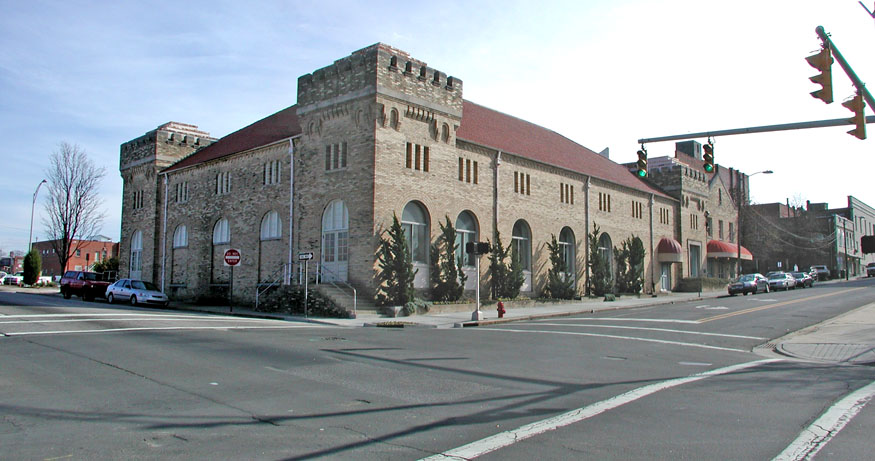 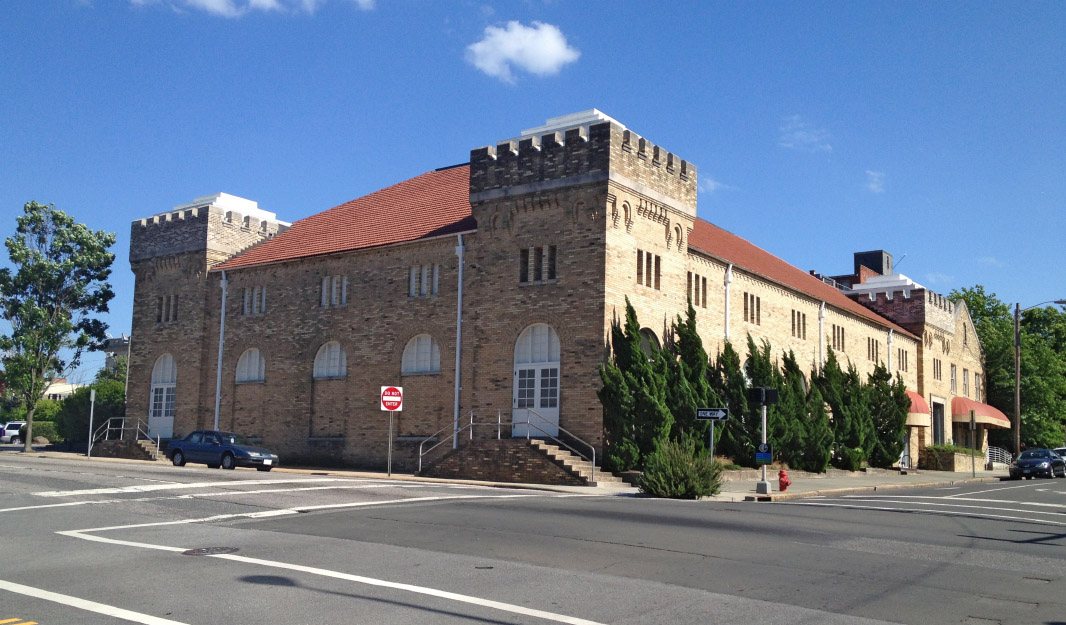 After all the broughaha over

After all the broughaha over the council's trip to Baltimore, I never found a venue to put forward a suggestion I've had for a couple of years now, save for a quick mention to a clearly skeptical Eugene Brown at the W. Chapel Hill St. charette this weekend.

My father was attending a national conference in Baltimore a couple of years ago, and since I was between job and school at the time, he invited me to come up and crash in his hotel room for a few days. It didn't take me long to get tired of all the Disney crap along the Inner Harbor. Sure, it looks like it's bringing in lots of money to the city, and provides plenty of tourist dollars and tax revenue, but it wasn't my cup of tea.

Based on the recommendation of my now-brother-in-law, who's from Balmer himself, I set off on foot towards Fells Point, and encountered the small city market that remains there. Over the next several days, I made it to all but one of the many city markets, including the privately owned Lexington Market, a cultural landmark in a not-so-great part of the city.

The concept was pretty simple, and is just a holdover from the old days when these things were central to the local economies. The buildings are like microeconomic shopping malls. For the most part, vendors get something around 12'x12' squares in a large hall, each one provided with basic electricity, plumbing, and phone. The vendors in the stalls ranged from food court-like small restaurants, to bakers, butchers, fishmongers, novelties, souveniers, doughnut shops, video rentals, and about anything else that you could think would fit in a tiny square.

I absolutely fell in love with the idea. According to the vendors I talked to, the city actually makes a small profit on these endevours. In addition, they serve as a combination of small business incubators for entrepreneurs who can't afford a full storefront to start out with, as well as a means of providing services to inner city neighborhoods that are ignored by the chains.

Baltimore's not the only city with these markets -- Washington's Eastern Market springs to mind -- but they've got more than any other city I've been to. Raleigh and Wilmington have markets still standing, but they're generally put to other uses.

Could this still work here? The physical plant investments aren't extraordinary -- most of the improvement is done by the vendors. It strikes me that the biggest burden is simply the startup and administration of the markets. But in each of the markets I visited, spare stalls were few and far between -- they were obviously effective at attracting vendors.

(I know this isn't really about the Armory location, but you got me started...)

The markets appear to be run

The markets appear to be run by a non profit corporation of some sort:

Thankfully, they appear to be better at running the markets than they are at designing web pages. I have to admit, given Durham's record on running city-affiliated non-profits, the thought of inflicting another one on the city gives me a bit of vertigo, but...

Thanks for commenting - I agree completely. I've always loved Eastern Market in DC, and the French Market in my hometown of New Orleans. Ideally, I wish our farmer's market were tied in with a more permanent structure (beyond the no-walls shelter being built) that could house the kind of vendors you are referring to on an ongoing basis, while still providing space for the farmers that come on the weekends, or a few days a week. I'd love to explore Baltimore more at some point. Seems like my kind of town.