The Harris House was built during Hope Valley's second major wave of construction in the 1950's.  What follows is the write up from the Preservation Durham 2010 Historic Home Tour Book:

The Harris House was erected in 1956 by Carl and Betsy Harris.  Carl Harris was active in the textile industry in Durham after receiving a bachelor’s degree in textile manufacturing from North Carolina State University and serving in the U. S. Army Air Corps from 1918-1919.  He was employed by Erwin Mills, Inc., once the world’s largest producer of blue denim fabric, where he rose to the ranks of vice-president before his retirement in the 1950s.

Harris was also president of the Southern Textile Association in 1929, president of the North Carolina Cotton Manufacturing Association from 1951-1952, and was named state vice-chairman of the North Carolina-Virginia delegation to the annual meeting of the National Cotton Council in 1960.  He was a member of the American Cotton Manufacturing Institute, a director of Durham Bank & Trust Company (a predecessor to CCB and SunTrust Banks), and a trustee of First Presbyterian Church in downtown Durham.

The Harrises employed Carlisle White, Sr. to design and construct their new Hope Valley home.  The Colonial Revival house on sits a large, gently sloping, lot at the intersection of Westover Road and Somerset Drive at what was then the west terminus of the neighborhood.  The Harrises retired to Hope Valley from Durham’s Forest Hills.

In retirement, Mr. Harris kept an office, with a wood burning fireplace, and a secret wet bar hidden behind the paneling, on the lower level.  Betsy Harris was very active in the Hope Valley Garden Club.  The Garden Club was largely responsible for the maintenance and repair of Hope Valley’s common areas, and entry gates prior to annexation by the City of Durham and the reinstitution of the Hope Valley Neighborhood Association in the 1980’s.

The Harris house is an elegant and detailed brick split-level home with a generous foyer and stair landing;  a large living room, dining room, kitchen, and sunroom on the main level, three bedrooms and two bathrooms on the upper level, and the office,  another bathroom, and a garage on the lower level.  The house retains its original six-over-six wooden sash windows, hardwood floors, crown molding, and a Colonial Revival style mantel in the living room.  Notice the ceiling height on the main level, unusually high for this period.  On the exterior, the home’s original functional shutters remain, as well as decorative cornices over the windows.  Unlike many homes built in Hope Valley during this era the Harrises included an enclosed two car garage.

The striking, renovated kitchen retains its original knotty pine cabinetry and stainless steel countertops.  Notice the decorative scallops, an original decorating treatment. The enlargement of the kitchen, that now flows into a casual dining space, during the ‘90s remodel opens the area but retains the feeling and integrity of the original room.  The office downstairs has the same pine paneling (a hallmark of homes built by Mr. White during this time), and the hall-bathroom on the upper level retains its original tile and pink fixtures.  An original crystal light fixture remains in the foyer and a similar original fixture still exists in the master dressing area.

Of special interest is the buzzer system with which Mrs. Harris called the maid (a fixture in most Hope Valley homes during the 1950’s and 60’s), call buttons, that trigger a loud buzz, remain in the sunroom, under Mrs. Harris’s place at the dining room table, at the head of the master bed, and in Mr. Harris’s office on the lower level.  The current owner laughs when describing the buzzer system, “It is obvious that the Harrises planned this home around the idea that there would be “help” available at all times.”  “The buzzer and a kitchen with no eating area make this clear!”

Betsy and Carl Harris remained in the house until their deaths in 1987 and 1984 respectively.  The home passed to their heirs and was eventually sold in 1992.  The new owners began updates, but sold the property after only two years.

The current owners purchased the property in 1994 and have since renovated the house and completed a sympathetic addition according to the designs of Hutch Johnson of W. H. J. Designs.  The family enlarged the kitchen, added a dining area to the rear, and a second split-level structure with a family room above and bedrooms below.  Johnson was very careful to match existing interior and exterior details and obscure the addition from the street view.  The dining room was enlarged by approximately 40% and French doors were added to provide access to the new patio.  In addition the new owners have added pea gravel to the driveway creating an eco-friendly parking area with raised flower and vegetable beds along the north side.

The Harris House is a wonderful example of the adaptive redesign and reuse of a solidly built 1950’s split level home.  The home is located in the Watts Norton Section of Hope Valley developed by local business man L. Watts Norton and his wife Ann. Mr. and Mrs. Norton were long time Hope Valley residents and lived on Dover Road in the 1920’s era Norton House, a contributing structure in the Hope Valley National Register District.  The Norton Section of Hope Valley and its intact collection of significant 1950’s homes, like the Harris House, will be included it is hoped, in the first boundary expansion of the Hope Valley National Register District.

Its idyllic setting on a generous lot with mature oaks and magnolias, along with its careful renovation and upkeep make the Harris House one of Hope Valley’s mid century gems; and represents the continued prominence of the subdivision among Durham’s neighborhoods during the 1950s. 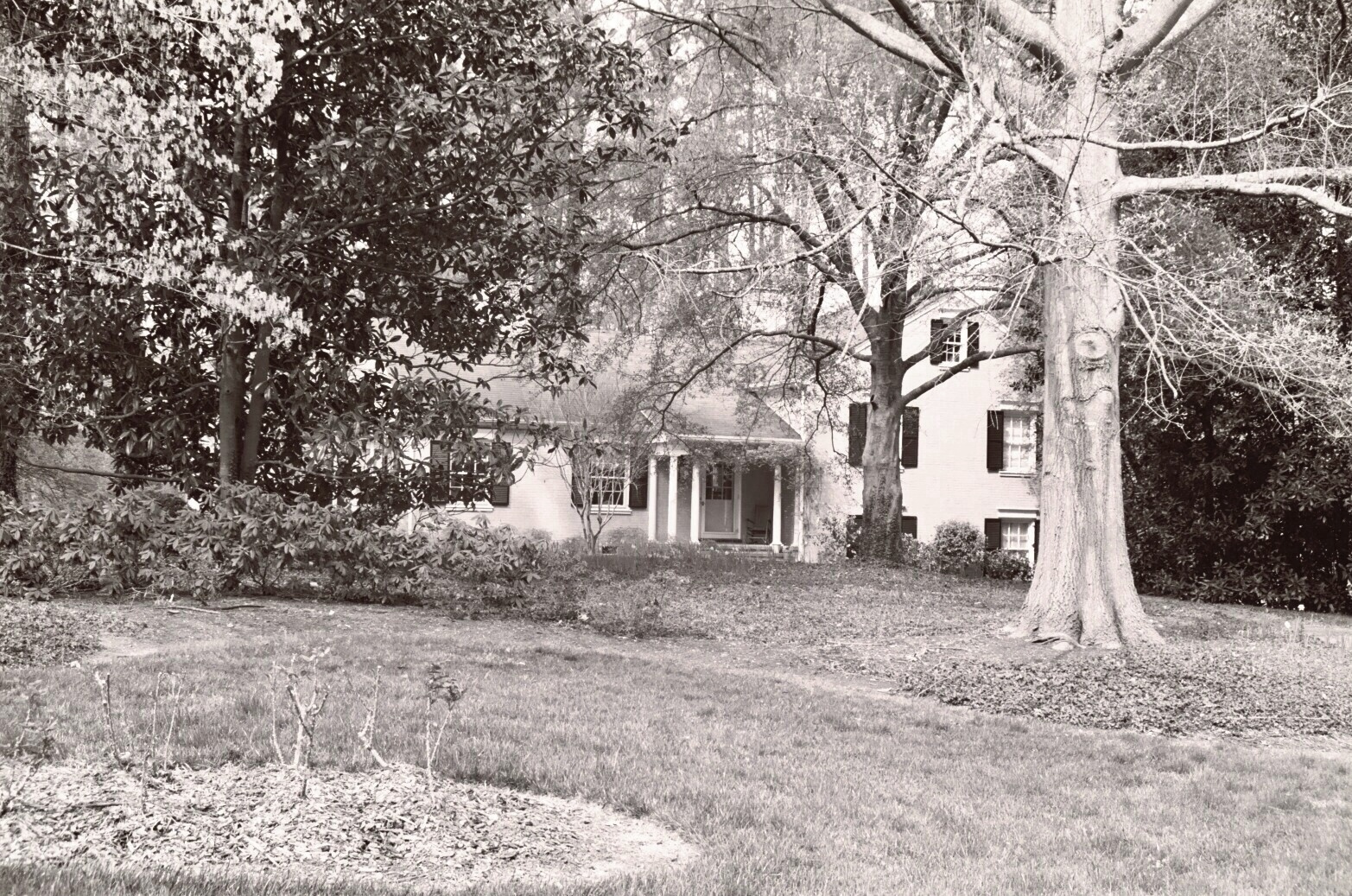