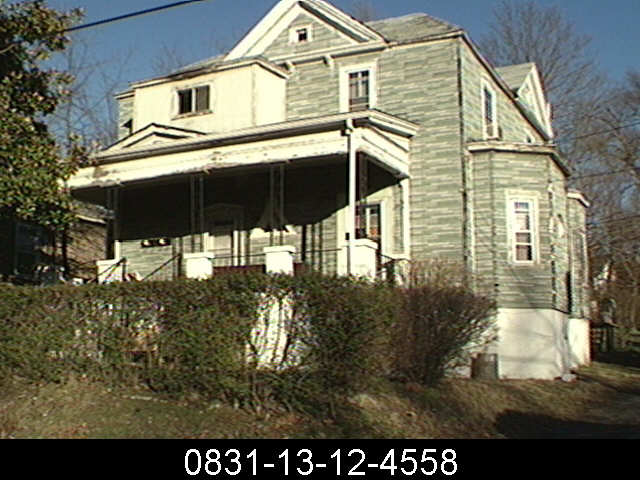 An impressively detailed house that predated the others on this side of the block by several decades. Richmond Allen acquired the land from D (?T) Vickers in 1887 (DB 9, P381.) I can barely make out the details on the handwritten deed; the house most likely dated from the 1890s. Allen was a carpenter, and may have built the house himself.

Update: I hadn't realized that this house was in the Durham AHI; their writeup from 1980:

Situated at the southeast edge of central Hayti, this house appears to be the last surviving substantial late 19th century dwelling in the area. In addition to being perhaps the oldest of the finer houses constructed in the the black community, the building is noteworthy for having remained to the present day in the family of the builder.

The multiple hipped and pedimented roofline, the one-story polygonal bays on the south elevation, the windowpanes of colored glass, and the turned and sawn woodworking that survives throughout the the house all support the statement by the owner of this house that it was constructed at the end of the 19th century by his grandfather, Richmond Allen. Allen was listed in a Durham city directory in 1889 and his residence at this specific location is confirmed by a 1903 directory in which he is listed as a carpenter. According to the present owner, Allen constructed many houses in Hayti and all of his sons adopted their father's trade.

The original detailing that reflects the carpentry skills of the builder survives in spite of exterior alterations that include the application of asphalt siding and the replacement of the original turned porch posts with metal supports. All of the mahogany trim throughout the interior reflects the skill of the builder. It includes ornate mantelpieces and overmantels with fanciful details, a three-run closed string staircase with sawnwork brackets applied to the string, and ceiling beams in a decorative checkerboard pattern that emulate coffering. Originally all of the windows contained panes of colored glass, but today the colored glass survives only in the whimsical triangular-shaped window beside the entrance, the oval window in one of the polygonal bays, an din the variously-shaped windows along the stairs.

The house remained in the Allen family until 1986, almost 100 years after their grandfather acquired it. Unfortunately, it was allowed to deteriorate badly, as is evident from the tax photo above. It was demolished in 2008. To me, this is a fine example of what is wrong with preservation in Durham.

1) We keep hammering the narrative that Hayti was destroyed by the freeway, which a) isn't true - it was mostly destroyed by urban renewal and b) ignores that fact that we are still losing houses that were a part of Hayti. People and groups love the narrative of dramtic destruction and survival as a people more than the messy reality and non-dramatic hard work of saving what is left.

2) There is so much pettiness and infighting amongst non-profits in Durham that the place could be demolished around them, and they'd still be worried about who was getting credit for their meager accomplishments. I've seen far more cooperation and theory-of-abundance in the for-profit world of Durham than in the supposedly community-oriented non-profits.

3) People of Durham still take a passive approach to preservation. They love stuff when it's preserved, but aren't willing to invest in being proactive. In particular, folks with significant amounts of money haven't ever made the kind of major commitment to revitalizing Durham's old architecture that you see in cities that really embrace that value. As a consequence, although our economy is relatively robust, we don't see the same kind of local investment that 'old money' cities do.

I went int his house several

I went int his house several times before it was torn down. If I remember correctly there was a small telephone nook built into the wall near the triangular window in the front, and dark wood staircase inside the front door to the left. That triangular window was stained glass. I think the entire thing had hardwood floors, and many of the doors still had glass doorknobs. I believe there is a write up of the house in the Durham Architectural and Historical Inventory.

You're right Dave - it hadn't

You're right Dave - it hadn't occurred to me that it might be in the arch. inventory. It sounds even cooler than the outside implied it might have been. I'll add their writeup to the post.