600 Foster St. was built circa 1958-1959 as a branch of the Home Savings and Loan. By the late 1960s, the building had been re-purposed as an appliance store known as Miller-Hurst. 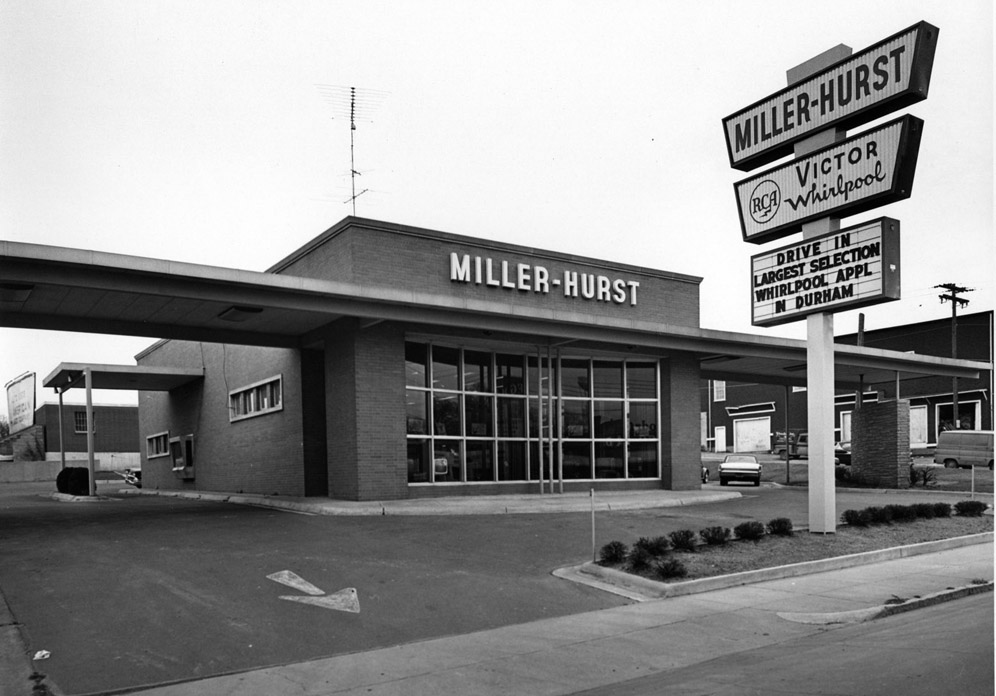 By 1970, the building was definitely no longer selling dishwashers. 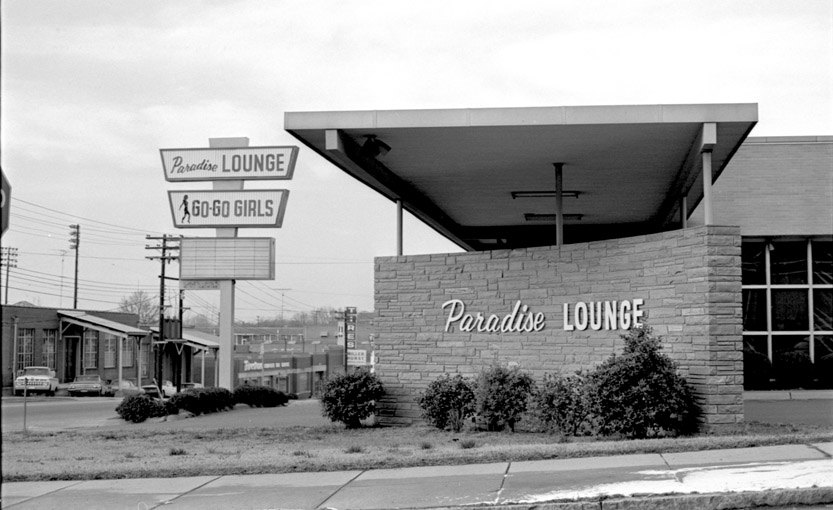 From the 2013 National Register Listing below in italics:

This well-preserved mid-century modern branch bank was constructed about 1959 for Home Savings and Loan Bank at the northeast corner of Foster and W. Corporation streets. It does not appear in the 1959 Durham City Directory but is listed in the 1960 directory. Although it is a simple one-story, flat-roof, rectangular brick building, the unknown architect's treatment of the original flanking drive-thru entrances for autos elevated it to a dramatic example of modern suburban commercial architecture. A metal canopy stretches across the west-facing façade and is supported at each end by a curved orchard stone wall with a planter at the base and by metal pipe columns. Autos originally pulled through the canopy on each side of the building to drive-thru porte-cocheres. The main block is faced with orange Roman brick in a running bond, with an angled concrete coping. At the front and south side are large fixed-pane picture windows. The front window is concave. Other side and rear windows on the main block are smaller, grouped, fixed- and sliding-pane windows with wide concrete surrounds. The south side drive-thru porte- cochere is a flat canopy supported by metal posts and the window and wall deposit box are still in place. The front half of the building contains a tall-ceilinged open banking room, while the rear half has two levels of office spaces.

[B]y the late 1960s the Miller-Hurst appliance store occupied the building. [B]y 1970 the tenant was the Paradise Lounge, advertising "go-go girls." Throughout these uses, the building retained its open canopy and two drive-thrus. Paul Tesar's article on the building, "Wings of Eagles," (www.spectatoronline.com, Jan. 26, 2000) traces the building's later history as Coman's Hardware and Building Supplies from 1979 to 1997. Coman added an addition of similar design to the north side, behind the curved stone wall, which created a secondary commercial space in place of the north drive-thru canopy. The concrete block addition blends harmoniously into the façade because its front wall has a similar brick veneer and a similar full- façade plate-glass window and door. A second, lower-height frame addition was added to the east rear elevation.

Architect Ellen Cassilly purchased the building in 1997 and converted the building to office space, including an office for her architectural practice.

The interior of the original main block retains the open character of a bank lobby. Although one of the two distinctive original drive-thru canopies has been replaced with an addition, the building still visually conveys its bold modernist branch bank design because the canopy and curved stone wall and planter of the north drive-thru remain in place and the front wall of the addition is nearly completely glazed, thus the missing drive-thru is visually implied. From the intersection of Foster and W. Corporation streets, the building’s principal viewshed, the surviving south drive-thru is visible and the building appears to be unaltered. The Home Savings and Loan Bank retains sufficient integrity of design and feeling to be a contributing resource in the district.

Like much mid-century modern architecture, this building demonstrates how architecture/landscape began to shift from orientation towards the pedestrian to the vehicle, most notably the advent of drive-through banking. But it also does so through the presumption that the primary entry to the building would be from the parking lot rather than from the sidewalk.

Nonetheless, this building demonstrates how mid-century modern architecture can be beautiful as well, with a bevy of intersecting 90 degree angles and sweeping wing-like canopy?(not sure what to call it) supported/cantilevered by stone-faced, curved walls. Unfortunately, I think good mid-century modern design has often been lumped into the same pile with much of the rubbish that began to be produced in the 1960s and 1970s. Although it's rarely been the focus of this website, you can read more about the loss of modernist housing in the Triangle at the aptly named Triangle Modernist Houses.

I'm 99% certain that this building served as a branch of North Carolina National Bank (NCNB), which was based in Charlotte. I had a map (that I gave to Ellen) showing where NCNB had offices in Durham which was published around 1961 ? touting the opening of the new branch at Lakewood Shopping Center. The map had a drawing of the building on Foster St which confirmed this same building. Some Durham old timer should be able to confirm this for us. I'm thinking Home might have been in another location nearby or was purchased by NCNB?

And by the way, what's the purpose of a "drive in" appliance store? Perhaps folks could make payments on their purchases, but something tells me refrigerators, washing machines, and stoves were not easy to fit through the manual push out teller drawers.....

1960 City Directory lists 600 Foster St. as "Home Savings and Loan." There was a very similar drive-in bank located ~2 blocks south (on the southeast corner of Seminary and Foster - 324 Foster - current Y parking lot) which was a NCNB per the 1970 city directory.

I believe the building was

I believe the building was also the home of Coman Lumber and Building Supply before Ellen purchased it.

Thank you Gary. I guess I

Thank you Gary. I guess I thought I had the right place. Sorry Gary, sorry Ellen. Both on Foster....similar designs....

Gary, Thank you so much for your informative blog. It is a gift to the citizens of Durham.

I bought the building from Bill Coman. The Coman Building Center was here for about 16 or more years. You could check that out with Bill's son or nephew.

The Comans started selling Esther Williams Swimming pools and actually had Esther herself come to Durham to inaugurate the enterprise. John Bloedorn, of Craven Allen House of Frames, showed me a newspaper clipping which he was about to frame which had a picture of Esther getting out of a convertible in front of 600 Foster Street in June IN A FUR COAT. She was surrounded by the Coman brothers and a few other gentlemen. If I can find the image I will pass it on to you.
Ellen

A few years ago the guys over

A few years ago the guys over at Nu Tread told me that the building used to be a strip club in the 1970s (or so)...

Indeed Michael. As a former

Indeed Michael. As a former employee of NCNB, subsequently Nationsbank, and now Bank of America, I am pretty up to speed on the mega Charlotte bank. When I worked for NCNB as a summer job in college, I was always fascinated when I'd get assigned to some old branch that had been acquired by NCNB. Older locations had many more bells and whistles to serve/impress the customer. (ex: walk up drawers, marble floors & countertops, etc.) Certainly with more and more folks (like me) doing banking online, I can't imagine many banks spending tons of cashola impressing folks with bricks and mortar. First Citizens is the only one that routinely does this, but their offices are over the top and frankly are intimidatingly ugly to me.

It's a great building and

It's a great building and example of decent mid-century design. I'm glad Ellen grabbed it!

I am surprised, actually, that it incorporated a drive-in window so early on. I'd wrongly assumed the structure served as a bank with drive-thru much more recently. I guess it was part of the then modern concept of catering to on-the-go customers.

Gary does provide a terrific service to Durhamites old, new and future.

I'm happy to see downtown reviving. When my partner moved down here in the '90s she was stunned that downtown was like a ghost town, as in that TV movie about nuclear holocaust ("The Day After"?) in which the people get obliterated by everything else is just dandy.