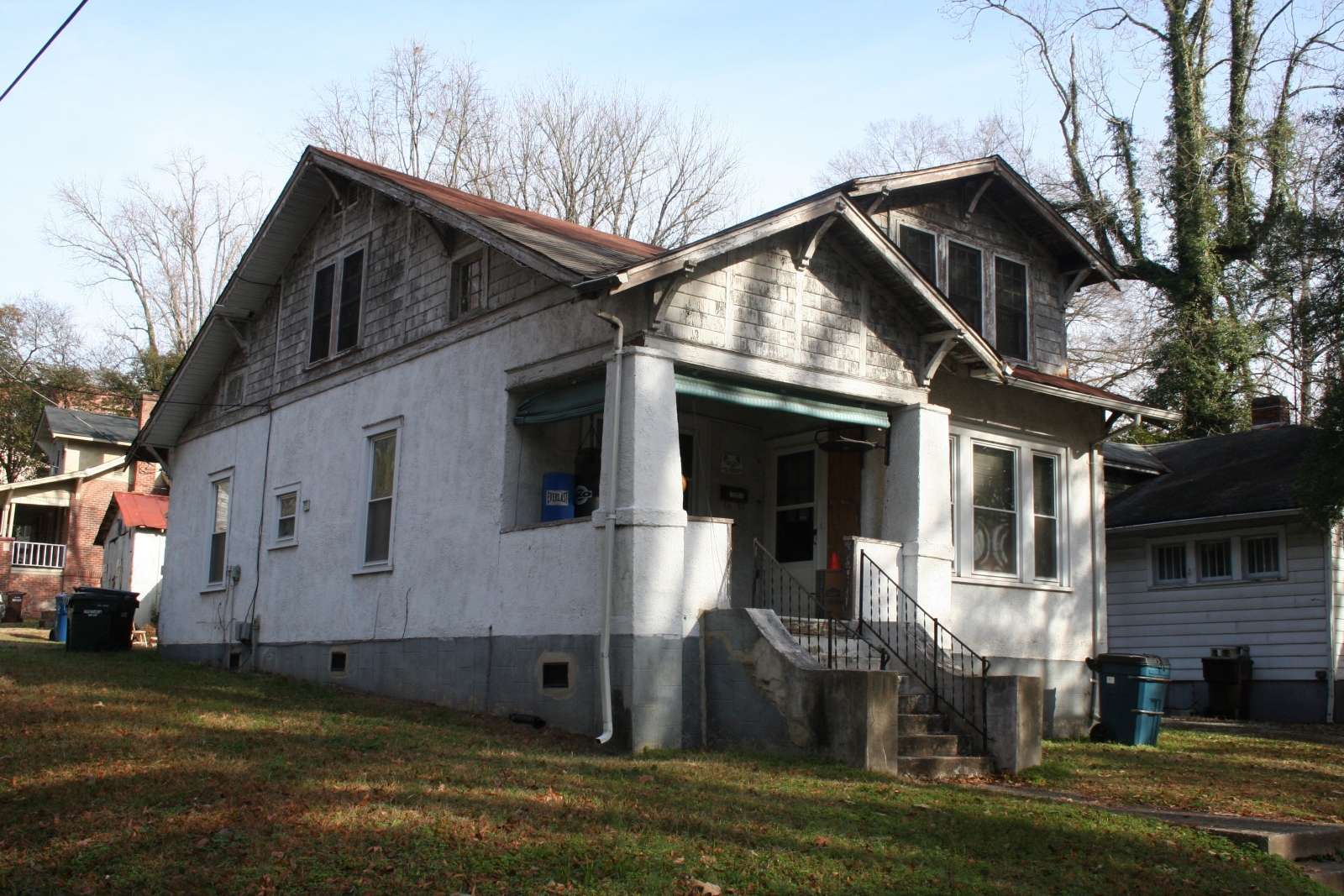 This distinctive bungalow features a stuccoed first floor, wood shingles and sawn knee brackets in the gables and dormer, a partially inset porch and an off-center gabled dormer on the façade. The house is two bays wide and triple-pile with vinyl windows throughout the first floor, original nine-over-one wood-sash windows in the gables and dormer, and two interior brick chimneys. A partially inset front-gabled porch on the left (west) end of the façade is supported by tapered stuccoed columns on stuccoed piers and accessed by a concrete stair with curved concrete knee wall and decorative metal railings. It shelters paired windows on the facade and an entrance on the left elevation of the right bay. There is a triple window on the right end of the façade with a gabled dormer above it, also with a triple window. An exterior stuccoed brick chimney on the right elevation is flanked by windows and to its rear is a projecting shed-roofed bay with a triple window. The left gable features paired windows below paired gable vents with the windows flanked by a smaller six-light window at the rear and nine-light window at the front. A shed-roofed dormer on the rear elevation is covered with asbestos siding and has a single replacement window. A shed-roofed porch on the rear elevation was enclosed before 1981 with six-light windows over vertical wood sheathing.  A prefabricated shed stands north of the house, adjacent to the shed. The earliest known occupants are Reverend Eugene L. Henderson, pastor at St. Titus Protestant Episcopal Church, and his wife, Lula Henderson, in 1930.

On April 17, 1930, W.G. Pearson and his wife, Minnie S. Pearson, transferred this property to the Hendersons.  Deed records indicate that North Carolina Mortgage sold the property to J. Walker Farrington on February 17, 1933.  According to City directories, Mr. Farrington lived there until 1955.  On November 22, 1955, L.M. Berry, who lived at 304 Formosa Avenue, sold the house to Bobbie B. Lundy.  Bobbie Berry Lundy and her husband, James Lundy, sold the house to Janet R. Parson and John Douglas on April 22, 1983, according to deed records.  On May 1, 1988, they sold the house to John K. Greene, a math professor at North Carolina Central University, who is the current owner and occupant..