401 Foster St. was constructed around 1930 as a post-and-beam warehouse, very similar in construction to the Garrard Warehouses nearby. This warehouse, and the warehouse immediately to its west (up a very steep grade to Roney St.) were operated by the WP Henry Company, and noted as "Lessee, Liggett and Myers Tobacco Company"

As Foster St. rapidly transitioned from an area of primarily sparse, small residential structures to an automobile mecca in the 1930s-1940s, the warehouse was converted to a auto service and sales building - likely circa 1940. The interior posts were removed, the roof was re-supported by steel trusses, and the front facade of the building was stuccoed. The building was the longtime home to the Williams Motor Company. By the late 1950s, Williams was also selling vehicles as a Nash dealership, having adopted the name "Williams-Nash Motor Company." 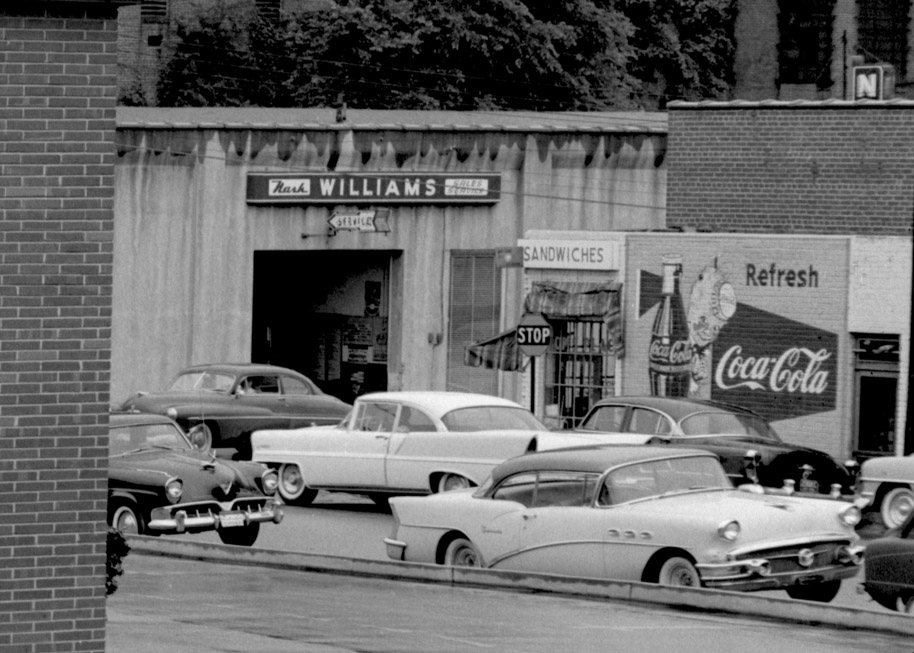 A very partial view of the front facade of 401 Foster from behind the buildings on the east side of the street, 1957. A piece of the vertical "NASH" sign can be seen protruding above the building on the right.
(Courtesy The Herald-Sun)

By 1970, the dealership had closed, and the building became home to Southeastern Radio Supply company.

The building was still owned by a trust that had evolved from Southeastern Radio when Andy Rothschild approached the ownership about converting the structure to an arts-focused development. Per Andy, the idea for this type of development had percolated for a period of time, given his longstanding interest in the arts. He states that the development itself arose out of a confluence of this interest with increasing confidence in the viability of the development and a desire to create space for a few of the artists that would be leaving the Venable Warehouse, given his proposed development of that group of structures.

The development, termed 401 Arts, proceeded in mid-2005, with initial tenants such as the Branch Gallery moving into their space in early 2006 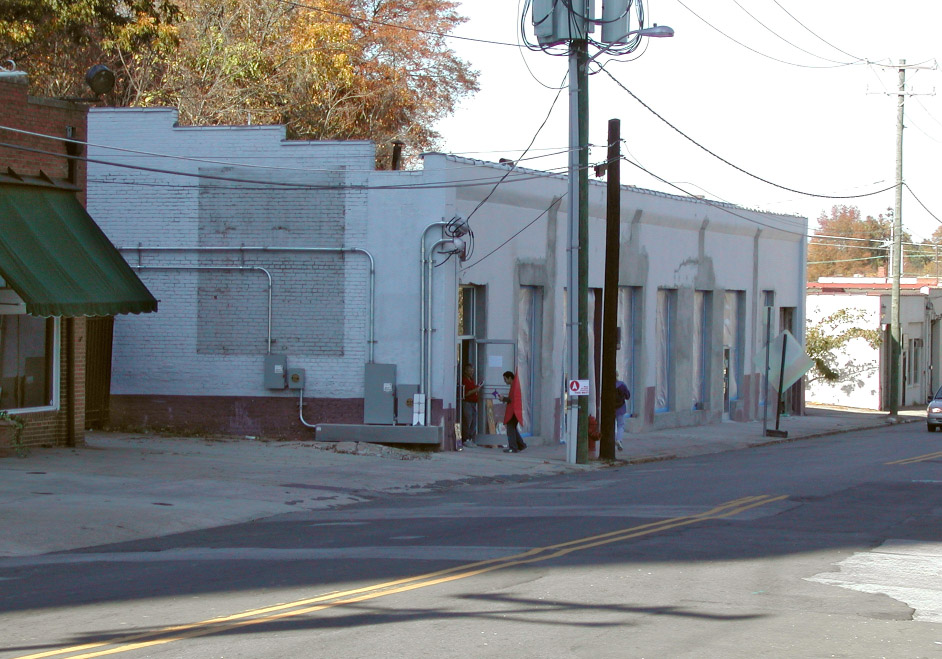 By the end of 2006, Piedmont and the Bull City Arts Collaborative were in their spaces as well. The popularity of the venues housed in 401 Foster has helped create an energetic space extending from the YMCA to the Farmers' Market/Scrap Exchange area. Andy described the success of 401 as the 'test-case' that provided the confidence to proceed with the Golden Belt redevelopment, a significantly larger-scale mixed-use/arts-centered development that is welcoming its first tenants this week.

My personal preference would have been to recreate the pilasters and sills, even if they needed to be relocated to accomodate the bays

As of 2011, Urban Durham Realty, BCAC, Piedmont Restaurant, and DaisyCakes were tenants; the Central Park area to the north and east grew by leaps and bounds during 2011-2012, giving the entire neighborhood a thriving 'lifestyle destination' character.

I wish Andy had left a few of

I wish Andy had left a few of the architectural details on this set of buildings... yes there were some... instead of covering the whole thing in stucco...

Unfortunately, to date, I haven't found any older pictures of this building. What were they?

Being familiar with 401 Foster Street, I think the “facts” posted about this building are somewhat abbreviated. I leased space there when the tenants had moved into 401 Foster when that part of downtown was, essentially, dead. It sat empty for years following Southeastern’s closure, before the YMCA,the Farmers Market, Liberty Arts, and Serenex, and it was known as The Studio Center for fifteen years or so from about 1988-2004. The longtime tenants ran the former retail space as a studio for area artists’ video/photography use, as well as renting to performing artists and out of town production companies that needed a studio, performance/exhibit space, or prop and equipment storage on a short-term basis. At the time the building was minimally divided, with an open office along Foster Street, a huge (and quiet)studio in the back, and a large garage/warehouse section that was virtually original from floor to roof. The tenants attempted to garner interest in developing the building as an artists’ collaborative for many years, and made many improvements on their own dime. I remember an article about this in the Herald-Sun several years ago just as the idea of Durham Central Park was beginning to gel. Unfortunately I believe the Studio Center guys were ahead of their time. Being turned down by the now infamous small-business loan program, and with little vision and support expressed from Downtown Durham Inc. or interest from any developer in making any improvements while keeping the space affordable, they were unable to proceed for lack of funds.

The tenants had an agreement with the owners that if 401 Foster were ever sold, they would get first refusal. Andy Rothschild’s original interest was to expand the wet lab space for Serenex, when they were looking to expand next door from the former Clark and Sorrell building they had begun leasing a couple of years before. The owners of 401 Foster were true to their word, but A.R. worked out a deal where he took a long-term lease on the building instead of buying it, thereby circumventing the agreement the owners had with the tenants. I heard when Serenex found out he was going to turn the artists’ enclave at Venable into wet lab space, Serenex faltered on the deal, expressing interest in moving to Venable when it was finished instead, and Rothschild was apparently left with a building with a signed long-term lease and no tenant. Until he was faced with this perplexing situation there is no indication he was interested in doing anything “for the arts” in this building. So he jumped on the original idea of the Studio Center guys.

I have to give A.R. credit: he knows how to gentrify an area. Venable and Central Park were once fertile ground for artists and craftsmen who needed less expensive space. When I first started working in Durham in the 80s and through the 90s downtown was all for that, with Central Park touted as the potential arts epicenter in the Triangle. But A.R. has managed to shift the lower-revenue tenants to East Durham while seemingly seeking higher rents at the up-and-coming downtown locations. Half of 401 Foster is now empty, most likely awaiting “full fare” tenants. I personally hope Golden Belt is a boon for East Durham, but I believe it is sleight-of-hand to get the artists out of downtown. Which may be good for Edgemont but is a huge change in the direction development was going downtown B.A.R.

And I will pitch in with the other comment on the building’s new look. What they did to the fenestration and façade of 401 Foster is at the least disappointing and cheap looking, with no regard to historic significance, aesthetics, or regard for basic architectural detail. If you look at the façade on a cloudy day you can see that after jackhammering off all of the brick buttresses and window coursing, the stucco was done (at best) poorly. It is too plain compared to what they started with, totally uneven, and without the value of previous artistic originality. Where is the awning with the neat arrowheads on its corners that adorned the front entrance of The Studio Center? And does anyone know what happened to the really cool murals by Amy Weinstein and TROSA artists that were on each end of the building?

But, hey, I guess that’s what is called PROGRESS in Durham! Like Urban Renewal and the I.L. “Buck” Dean Freeway, be careful what you wish for, City of Medicine; you might just get it, and with a lot of other aspects you didn’t expect!

Thanks for the additional info on the history of the building immediately preceding Andy Rothschild's purchase. I will add the information about "The Studio Center" to the post.

I don't think that the leasing of the structure was some conspiracy to avoid an agreement between the owners and the tenants - rather, the owners of the building have been unwilling to sell it to anyone. Andy confirmed that his original interest was to expand Serenex from next door. He was only able to obtain a lease, although he wanted to purchase the structure. When Serenex did not happen here, he needed to figure out what to do with the building and decided to pursue an arts-focused development.

I can agree with the idea if not the tenor of your criticism of the stucco - the older picture certainly looks like a cleaner finish. I'm not sure that the facade isn't an improvement, though, overall. The renovation has created street-level activity in a way that I'm not sure the original facade configuration would have.

Obviously, you've got some animosity built up about this re-development. Having engaged in more than my fair share of hyperbole in the past, I'm fine with you venting most of your indignation. But the linkage of this with urban renewal and the Durham Freeway is ludicrously over-the-top. Do you know how many actually impoverished people were displaced to housing projects and how many thousands of structures were destroyed - I mean obliterated, not storefront glass and stuccoed - in those processes?