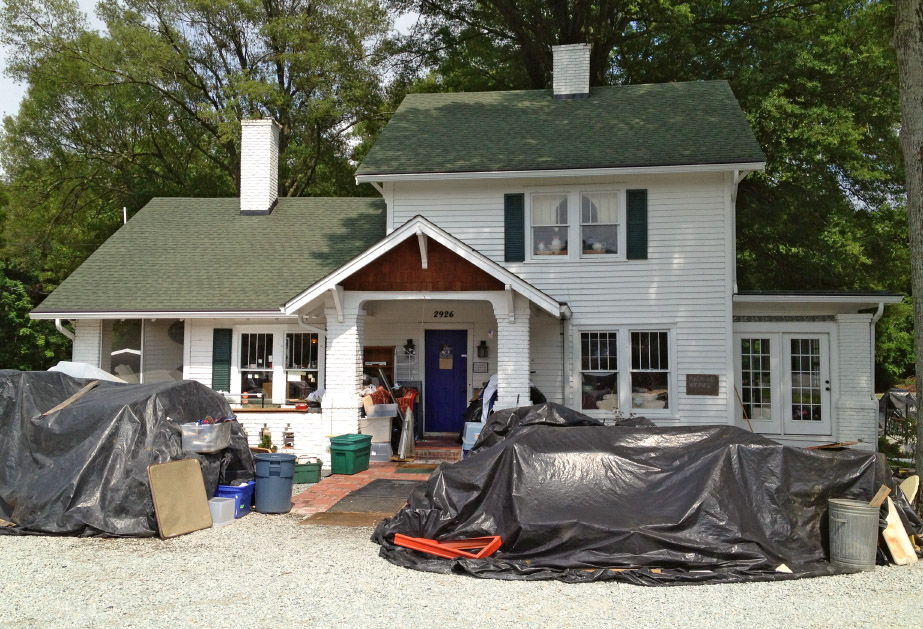 I figure that I must not be the only person in Durham, or in the Triangle who is interested in a place like this, but the fact that no one else has put it on here over the last 8 months, and the complete lack of any history in a Google search must mean that I am.

Regardless, the former house at 2926 Guess Road (originally noted in the deeds as Guess Mill Road) was mostly likely built by the Kirkland family, who appear to have owned the property since 1922.

I traced the land back to ownership by JB Warren, who owned land far up Guess Road. At some point, he conveyed 12.71 acres that were part of the "Warren Park Addition" to EK Powe and his wife. Interestingly, this land is later noted as adjacent to land belonging to WA Erwin, so the two Erwin Mills magnates likely invested significantly in land 'round these parts. Powe conveyed the acreage to DE Earnhardt on 07.30.1919 (DB56, P566.)

DE Earnhardt conveyed 12.6 acres to LD Kirkland on 08.03.1922. LD Kirkland then conveyed the land to LJ Kirkland later that same month. Although the date of building construction isn't clear from deed records, and no Sanborn maps cover the area, I'd surmise from the Craftsman features that the house was built in the 1920s. Interesting, the original parcel is noted as extending to "the Old Chapel Hill Road" - perhaps the same as the New Hope Road?

The building has housed "Everything But Grannies Panties" - a thrift / junk / used stuff / consignment / estate store - since at least the 1990s.