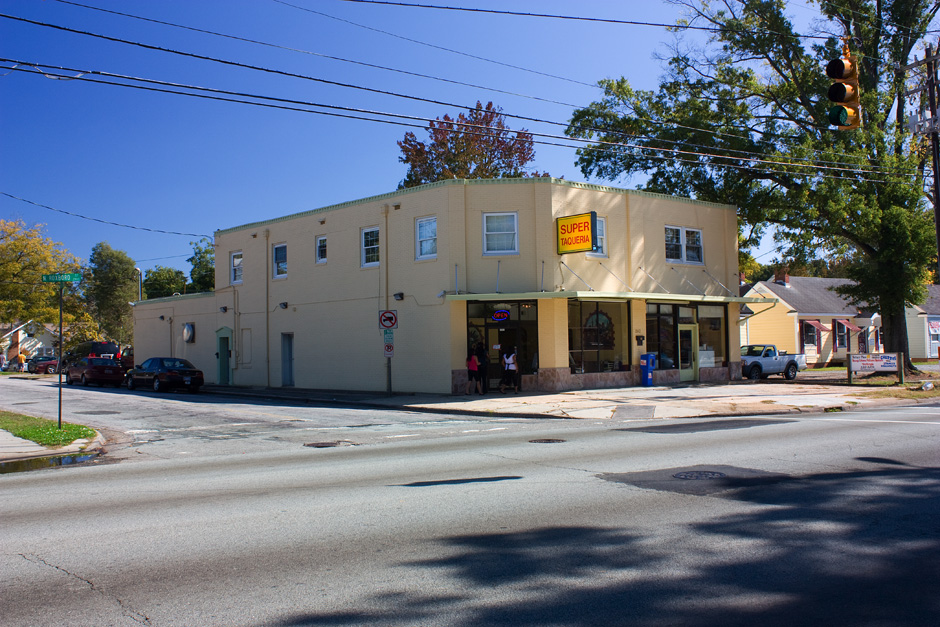 I don't remember when it ceased being a drug store, but definitely before 1975. It had a second-hand store in it for a while.

Upstairs were two large apartments with high ceilings, hardwood floors, large rooms. I don't want to guess when they were built, but the plumbing fistures and kitchen cabinets appeared to be circa late 1940s. The windows are new. Maybe they finally air conditioned the place. Looks like the bottom floor has been divided.

The drug store next door had revolving comic book racks in the back, and my sister and I spent an awful lot of birthday money from our grandparents in there, buying comics for 12 cents each. Archie & Jughead were favorites!

Dr. Gore has his offices upstairs. Rik wrote on the original Bragtown post:

The first door on the side led upstairs to Dr. Gore's office. Gore was also the county coroner. There were a lot of colorful stories about him. He flew his own airplane. I loved his wife's little mid-fifties Thunderbird two seater.

Later, the building housed Clayton's Vacuums and Sweet Dreams Waterbeds. Since ~2007, it has housed Super Taqueria.

This used to be Center Drug

This used to be Center Drug store on the right. Dr. Gore ,medical doctor has his office on the left. this was back in the 60's

It was the Center Drug Store. I caught the scho

It was the Center Drug Store. I caught the school bus on this corner. After school we could get a candy bar and a soda for a grand total of 25 cents.

Funny, I remember the Center Drug Store but what I recall most a

Funny, I remember the Center Drug Store but what I recall most about this building was that it had a metal sign on the side of it advertising Breyers Ice Cream. In those days (the 1970's) Breyers was still relatively expensive and most of us made do with Ann Page or Jane Parker ice cream from A&P...horrible stuff, really, but inexpensive. I remember seeing the sign often when my Mom drove our car by to the Hostess-Wonderbread Bakery Outlet wistfully wishing my Mom would stop the car and go there instead and buy me some ice cream!