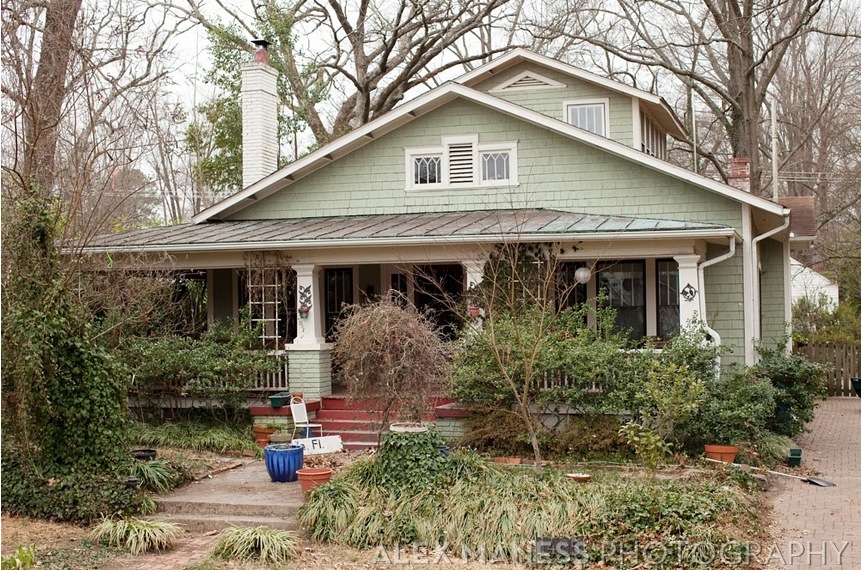 This distinctive Airplane Bungalow was featured in the Durham architectural inventory because its form is so unusual - only a handful of the type are standing in the city. A Bungalow is only one story by definition, with perhaps a finished attic and dormers to give additional living space or interest to the exterior; an Airplane Bungalow, on the other hand, has a pop-up above the main gable that looks a little like a tree house, a camel hump, or the cockpit of an airplane - hence the name. 1405 North Mangum is an excellent example, with a large first floor with the living room, dining room, and kitchen lining up on the left side and four bedrooms arranged down a long, central hall. Halfway down the hall, an enclosed staircase leads up into the cockpit: a light-filled space with bands of lovely windows, a private bathroom, and attic access on both ends.

Constructed about 1923 by Robert and Lille Snider Fletcher, this house may be uncommon in form but otherwise typifies residences of the era. The wide moldings, hardwood floors, and four-over-one windows are quintessential, although done to a higher level than many more modest Durham houses. Brushed plaster walls, high ceilings, and large banks of windows mark this house as a particularly fine example, and fill it with light.

The Fletchers had bought the property in February of 1923 from Gilmore W. Bryant, a Vermont native who had come to Durham [in 1898] to launch the Southern Conservatory of Music. As a music director and principal, Bryant did not buy and sell property regularly; he had bought the land only a year before from the original subdivider, Brodie Duke, via the Duke Land and Improvement Company. Surely, Mr. Bryant intended to build a house for himself and his children, set in an enviable position at a high point in the neighborhood. However, the Conservatory, once located at the [southwest]corner of Duke and West Main Streets, moved to a new site [south of town on Alston Avenue] in 1924 - and the Bryants moved into a new, large, [...] house directly across the street from it, never living on North Mangum Street. Perhaps the plans for the Conservatory’s relocation developed after the purchase of the property but before construction commenced, and Bryant realigned his plans accordingly.

Robert Fletcher, who built the house shortly after purchasing the lot, was a native of Henderson who, with his father-in-law Samuel Snider, founded the Snider-Fletcher Company, Inc., a jewelry company that boasted watchmakers, opticians, and engravers. He worked as the secretary-treasurer at the downtown store (at 110 West Main Street in 1920), while Lillie is listed as the vice-president; her sister, Mary B. Snider Umstead, as president after their father’s passing. The couple must have looked forward to having a house in the new Duke Park neighborhood, conveniently linked to downtown via the trolley lines running up Mangum Street. [The tracks extended north to the south side of the Mangum Street bridge which crosses the Belt Line rail, which just to the south of Duke Park]. They made use of the large house, bringing her father and brother Dudd to live in the house too before the 1930 census.

Mr. Fletcher passed away in 1941, and Lillie stayed in the house for a few years, selling it in 1944 to Wilbur and Anne Parker Tillett. Mr. Tillett was a tobacconist heading into retirement when they purchased the house, and he passed away in 1956. Like Mrs. Fletcher before her, Anne Tillett stayed in the house after her husband’s death, finally selling the house in 1972, when she was nearly 80 years old. Because of the settlement of the next owner’s estate a few years later, the purchase price is recorded: $27,500.

The house passed through a number of owners before the current family purchased the property in 1993. Most of the work that has changed the house was done before them, including the first floor bathroom, which has three entrance doors making for a complicated arrangement. The kitchen has a painted wood floor - a treatment that protects the wood as well as the more common sealing and adds a pop of color. Other, gradual improvements that have altered the house over the years include screening in the rear porch, improving the upstairs bathroom, and extensive landscaping.

The current owners purchased the house in 1993 and have become a major part of the neighborhood, hosting a massive Mardi Gras party each year that culminates in a parade down to Duke Park. The party makes use of every square inch of the house, including the wrap-around front porch where children construct shoe-box floats, the rear screened porch, and the large back yard with ample space for entertainment.