1111
North Duke Street
Durham
NC
Year built
1920-1929
Architectural style
Four Square
Construction type
Frame
National Register
Trinity Park
Neighborhood
Trinity Park
Use
Residence
Building Type
Residential
Can you help?
You don't need to know everything, but do you know the architect?
Log in or register and you can edit this. 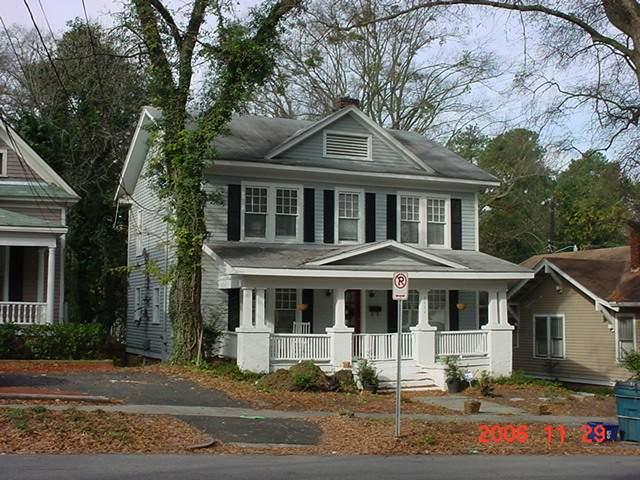 The Willis Aldridge House at 1111 North Duke Street was erected in 1927 by University Home Builders.  The land of F. W. Tilley was subdivided in August of 1925 and was sold to University Home Builders in July of 1927.  The house was likely constructed soon after as the property changed hands again in November of 1927 and the first residents were listed in city directories in 1928.  The house was purchased in November of 1927 by Wheat, Gallaher, & Company.  Nothing is known of the company and it was not listed in City Directories; however, they operated the house as a rental house until 1934.

The first residents were W. Avery Sorrell, president of Sorrell Hardware, and his wife Julia A. as well as John V. Barnhardt, vice-president of Sorrell Hardware, and his wife Mamie R.  As there is no indication that the house was built as or operated as a duplex during this period, it makes sense that the two couples would have known each other.  As the Great Depression wore on it is no surprise that the house continued to be inhabited by two separate families.  The 1930 federal census list W. A. and Julia Sorrell, along with their two children, Mary Ann and William A. Jr. living in the home along with John and Mamie Barnhardt.

In 1934, the property was sold to Willis Aldridge and his wife Emily Dowdee Aldridge. Willis worked for Carolina Auto Service and later formed the Montgomery & Aldridge Company, which, according to Endangered Durham, seems to have been a provider of automobile-related services and supplies as well as appliances and televisions. The Montgomery & Aldridge Company remained in business until at least 1951, during which time Aldridge was also listed with the Durham Transportation Corporation (1944-45) and Hotel Gas & Storage Company (1944-51). Emily Aldridge worked at the Thomas Book Store.

Living with Willis and Emily Adridge were Emily's parents, Leon and Catherine Dowdee.   According to the 1920 census, Emily (listed as Emma) was the youngest daughter of Leon, a bookkeeper for the railroad, and Catherine, a tailor.  The family lived on Roxboro Street in 1910, but by 1918 were listed at 404 Oakwood and in 1920 were listed there with Emily's older sister Catherine and an aunt.  However, by the time Willis and Emily Aldridge purchased the house on North Duke Street in 1934, her parents were aging (Leon was 59 and Catherine was 54) and the couple invited Emily's parents to live with them.  While living on North Duke Street, Leon was listed as a tobacco worker and Catherine was listed alternately as both a department manager and seamstress at Baldwins.  Leon passed away in 1945 and Willis and Emily Aldridge sold the house in 1952, moving to a large home on Devon Road in the Hope Valley neighborhood.

From 1958-1968, the house was occupied by Wilhelm Jorgensen and his wife Alice. Wilhelm was a special assistant to the commanding officer of the United States Office of Ordnance Research.  Their son David, a student, was listed with them in 1960. In 1968, Wilhelm and Alice Jorgenson sold the house to their son David and his wife Dean, who occupied the house until 1976.

My grandparents were Frank and Catherine Penny. My great-grandmother was the Mrs. Dowdee referred to in the comments. We called her, "Ba" and she was an amazing tailor/seamstress- her work was perfection! I remember playing on the front porch of this house, and on the brick steps while the grownups played cards, smoked, and talked on summer nights in the 1950's. I was born in 1953, and remember how my great-grandmother was almost swallowed up by the big chair she frequented on this porch. She was a slight woman whose face was framed with wavy white hair. Ah, great memories of summer evenings spent on porches watching Durham pass by as Duke Street was a two-way street back then.