111-123
Orange Street
Durham
NC
Construction type
Masonry
Local historic district
Downtown Durham
National Register
Downtown Durham
Neighborhood
Downtown Central
Building Type
Commercial
Can you help?
You don't need to know everything, but do you know the year it was built?
Log in or register and you can edit this.

Orange St. was, as the name implies, once a street - with older commercial structures along the western side of the street.

Above, a fuzzy view of the western facades of Orange St. - behind First Baptist Church, 1924.

Below, the view from December 1963, looking northwest on Orange St. Only a portion of 111-113-115 is visible on the left, but the Markham Jones Company building (119-123) is fully shown. Incidentally, notice that the flag is at half-mast after Kennedy's assassination. 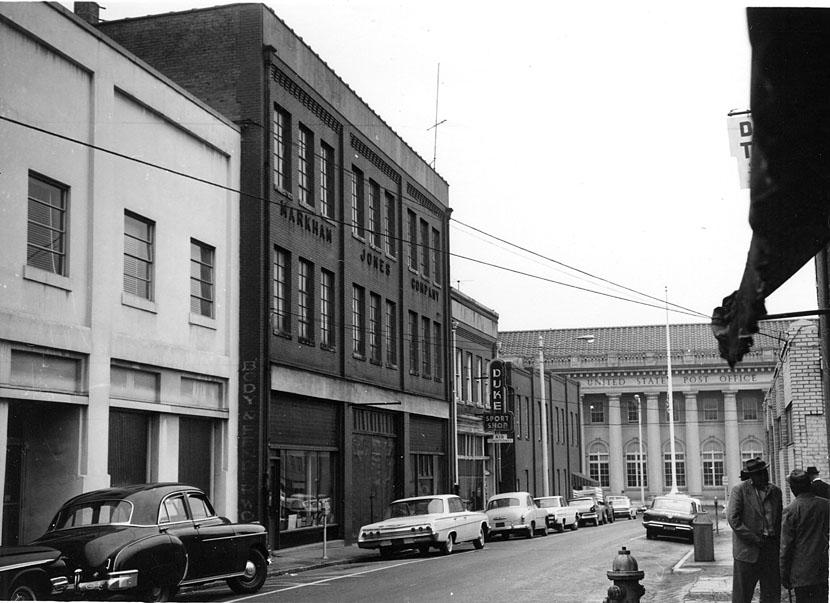 Below, another view looking west from Rigsbee, though a parking lot. Only the northern portion of 111-113-115 is again visible. 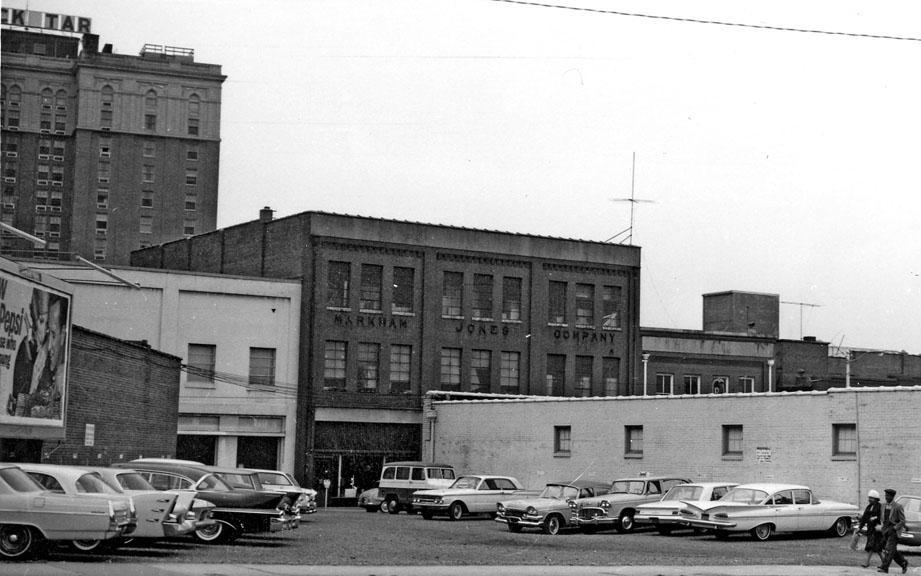 In the mid-1960s, the building was home to Croft Business School. 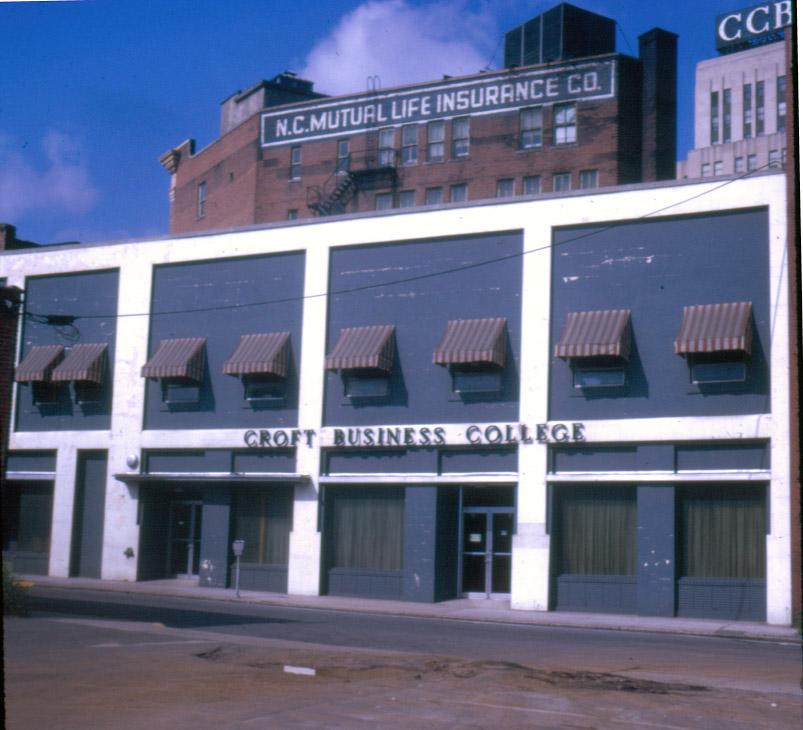 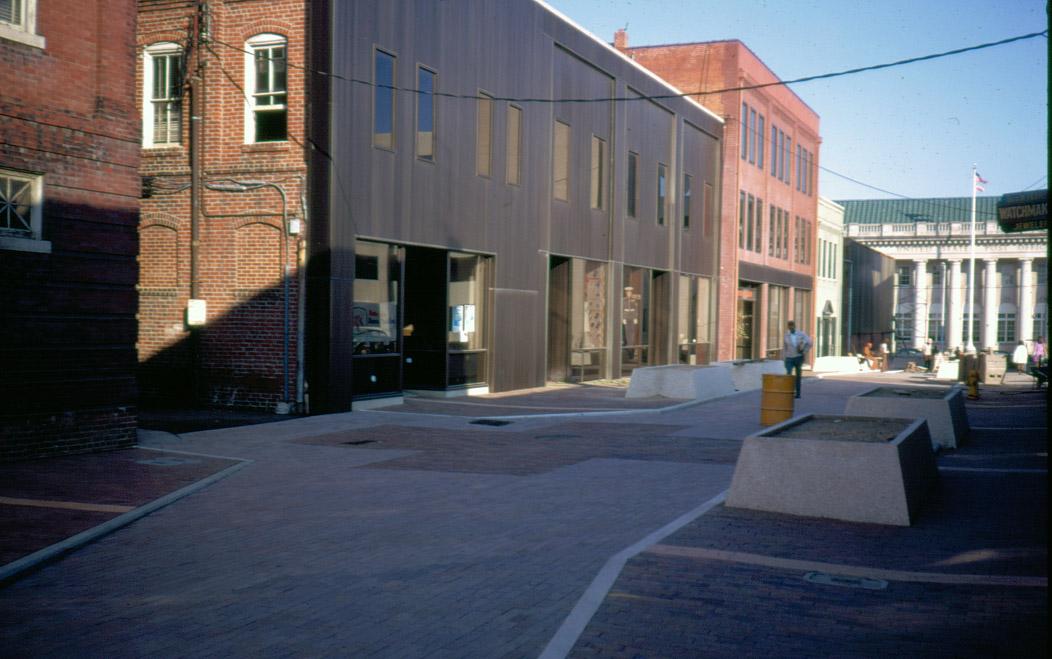 Sometime much later, 111 Orange came under new ownership and was allowed to again breathe, and was restored to something between the modern facade of the 1950s and the original facade. 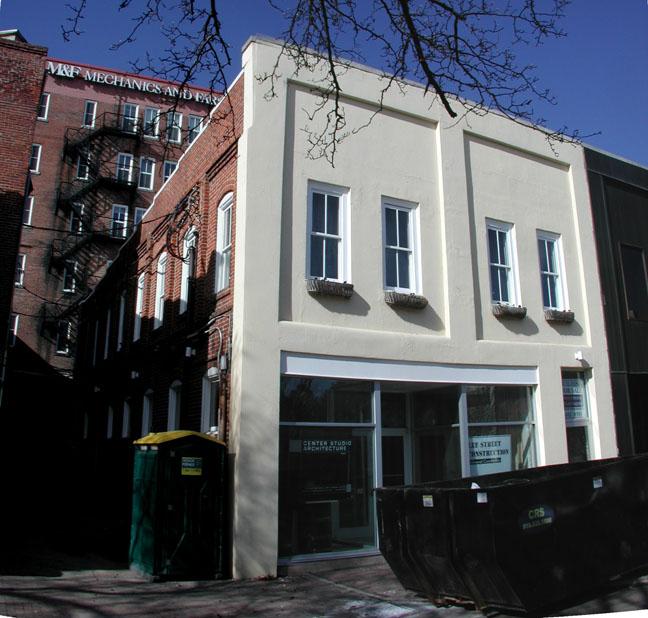 113-115, however, remains smothered as of 2013. It's owned by the Hanna family, who are sitting on their property without an eye towards improving or beautifying downtown Durham. They could hang carpets on the facade- it would be an improvement. 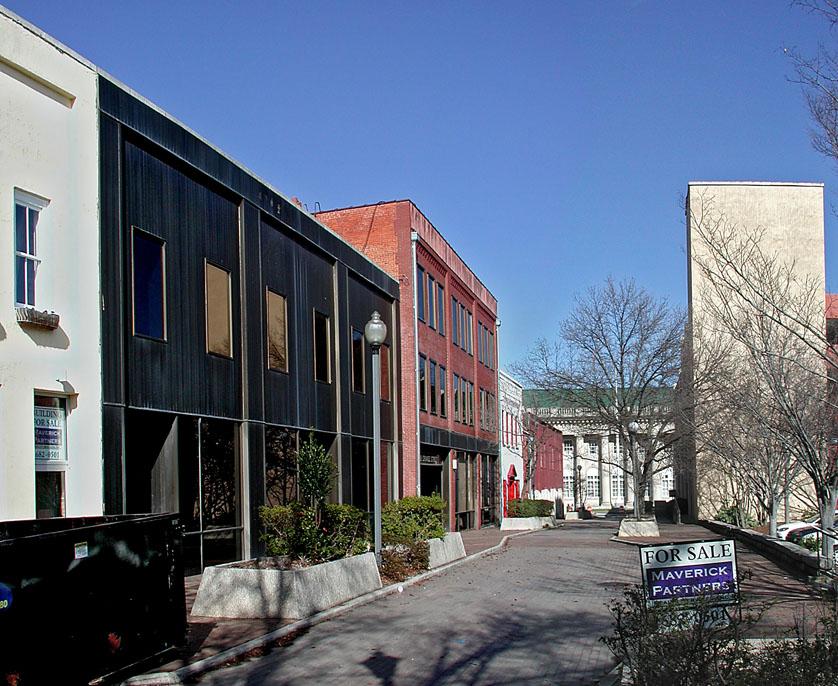 Overall, Orange St. would do well with elimination of the big planters - similar to the ones just removed from Main St. - and a return to a normal streetscape.

111 Orange became home to Scratch Bakery in 2010, which has been a huge hit. The potential of Orange Street begins to show a bit.

CA Croft, a native of Princeton, (Webster County) Kentucky, graduated from Kentucky State Teachers College and received professional training at Bowling Green University in Bowling Green, KY. He had time to teach one year in an Iowa high school before going into the Army during WWI. After the war, Croft taught for 10 years at Wheeler's Business...
Read More

I was walking down Orange St. last night, wondering about the facades of some of the buildings. (Particularly the Big Black Thing... guh - what a dead spot on the streetscape.)

Looking at the limited width of the right-of-way leading to the post office, and the genuinely nice brick pavers on both the sidewalk and the street, I wonder if it would be possible to, with limited expense, turn the street into a "curbless" street, where the grading of the street diverts rainwater away from storefronts, and the sidwalk and street sort of merge together. Ideally, it'd be without a center line, but would allow some on-street parking (in delimited areas), such that it allowed two-way traffic, but in a tight fix, such that cars might have to let each other go through certain tight spots. That street's never going to see high traffic anyway...

I'd also like to see natural gas lights like the ones on Monmouth in Trinity Park, both there and down the alley. I wonder if some development company (me, after I win the lottery) were to buy the whole block of buildings, if they could get the city to do the improvements as an incentive...

Dear Michael - I am thrilled to hear of you walking down Orange St. last night. However, it sounds like you wouldn't make it through alive and well if traffic were allowed through as you suggested. No clear definition of a sidewalk sounds very scary. AND why do we need to have cars pass through there anyhow?

Michael
Interesting idea if the street was narrow enough. In the old pictures, it was a one-way street (north), but perhaps making it two-way would have that effect. It is hard to tell how the right-of-way may have been changed, but the old configuration, with sidewalks, but with two-way traffic, would strike me as a good outcome. Growing up in New Orleans, we frequently had to 'duck in' on neighborhood streets. I don't really see any problem with it as a result.

Coco:
Mixing cars and traffic actually has some good success in other countries - the woofneuf (sp?) in Holland is an example, and England has used it with some regularity. By throwing everyone together (with trees, street furniture, etc.) they slow down the traffic.

I remember getting lost on Orange St. when I first moved here last year. I parked and was going to the post office. I was like "Hmm...this must be Brightleaf Square."

I couldn't remember the name either, but with a little googling it's woonerf.

Looking at it again, I don't think there's any good way to include both two-way traffic and on-street parking. Come to think of it, there's really no reason you couldn't make it one-way. It's only one block, after all...

Does anyone have any knowledge of the historical significance of Orange St.? Is there any?

Could you be more specific? Essentially this post and the other referring to other structures on Orange St. constitute some part of the historical significance of the street. Are you referring to the name, or particular events, or something different?

I guess the easiest test of historical significance is - If the buildings on Orange St went away, who would be upset and why? I'm not talking about Parrish St facing Bldgs.

I had heard that some of the Orange St. buildings played into the civil rights movement and/or were part of the Parrish St "Black Wallstreet". I'm struggling to find specifics.

That's a tough one in Durham - where the question remains, why hasn't Durham gotten more upset over the loss of the majority of its late 19th-early 20th century architecture in downtown? Historic significance means many different things to many different people.

While I know you've said you aren't interested in buildings facing Parrish, how about buildings facing the corner? The only building that has relevance to the NC Mutual companies is 106 Parrish St. (the Clements Building,) at the northwest corner of Orange St. and West Parrish - you can get another look at it by clicking on the Parrish St. tag on the left. As far as I am aware, there were not any significant civil rights events otherwise associated with Orange St.

I agree to a point, I don't like seeing great architecture torn down to be replaced with mediocre or worse. However, there needs to be a balance in paying respects to historical relevant buildings or simply old buildings, and the desire to rebuild Durham into a thriving community.

It is amazing to see the vibrancy in these old photos and juxtapose with our current town and stated downtown plan. We are trying to recover what was once here, torn down and now trying to rebuild.

In that process of renewal, I would expect to save as much as possible. But not to the point it risks the larger community goals. This is a subjective view and I'm sure everyone will have an opinion on what is worth saving vs what is not. I don't pretend to have the answer.

I'm not sure what seeming impediment to progress you are referring to - to date, the economic development from Downtown Durham to West Durham has all been tied to the adaptive reuse of historic buildings. Far from an obstacle, the historic buildings have been the catalyst for revitalization. With historic tax credits available, this makes sense on a pro forma level, but it also happens to capture the marketability and cultural vibrancy of a place that respects its past while building its future.

I have yet to hear an argument against historic preservation in Durham that is built upon specifics rather than generalization. It's easy to blame 'old buildings' for a static or moribund hyperlocal economy - but their lack of revitalization has more to do with the economic condition and negative externalities than the building. In short, my argument would be - when you see an abandoned historic building in a poverty-stricken area, the abandoned building isn't making people poor or generating crime. Poverty and crime are keeping anyone from investing in that building.

I don't know if you were looking for an easy answer - i.e. it's a civil rights location, so it's important. While undoubtedly true, what I've said in answering your query is that this isn't the only answer; there are multiple reasons why place takes on significance, and those reasons depend on your own cultural background and relationship to that place. The buildings on the west side of Orange Street are one of the best preserved row of commercial structures downtown. Some of downtown's earliest large groceries were located on either side. Etc., etc.

Fair points and as I'm involved in the revitalization of some of those buildings and taken advantage of tax credits to make proformas work, I agree.

I'm thinking about specific situations that I'm not discussing here so I apologize if I seemed to be challenging the preservation work. It's actually been great and I'm definitely supportive.

Since the downtown streetscape project, I've had a certain fondness for Orange Street-- a little island of the landscaping that used to be. Not that it's fantastic on a large scale, and couldn't use some retrofitting (benches, anyone?) to make it work, but it'd be a shame to forget how downtown streets looked for three decades.

Hi! Chuck Samuels here. Phoebe and I are currently putting the finishing touches on Scratch bakeshop going into 111 Orange. Can you give me the source of some of those great historical images of Orange Street, and do you have others? We are interested in including some kind of historical image or artwork in the new space.Thanks