1109
Camden Avenue
Durham
NC
Construction type
Frame
Neighborhood
Duke Park
Building Type
Residential
Can you help?
You don't need to know everything, but do you know the year it was built?
Log in or register and you can edit this. 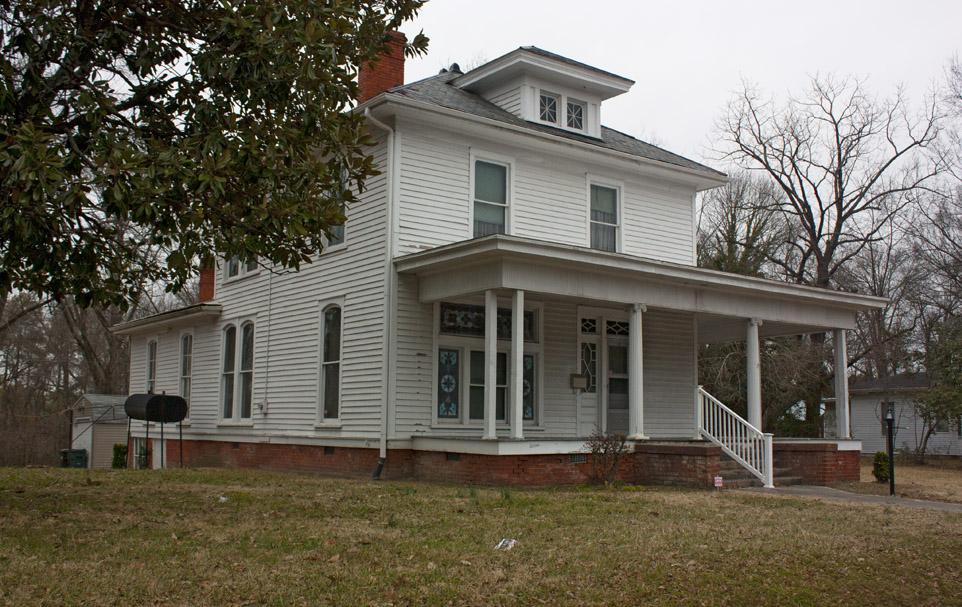 I've always been fascinated by 1109 Camden Avenue (formerly the eastward extension of East Trinity); it's a curious house. The historic inventory essentially throws up its hands at the house, noting the odd mixture of early 20th century form and elaborate late 19th century elements - the beautiful stained glass on the front porch, the tall Italianate windows on the west side of the house, and concluding - that it was built that way. It notes that J. Stedman, a painter, lived in the house in 1930 as its "first occupant."

The deed trail goes back to the first decade of the 20th century, when Mary Umstead (nee Brogden) acquired the property from FP Umstead and Mary Belle Umstead (in the undigitized DB 39 Page 103.) Mary Umstead appears to have sold it to RT Umstead, and JW Stedman acquired the house/land in September 1923 from RT Umstead and his wife Alice Piper Umstead. It is currently owned by the Reynolds family, and has been under single ownership since the early 1950s.

One curiosity is that the ZI Lyon Farm appears to have been around this way in the 1860s, but the elements in the house appear to be from a later vintage than that. Lyon and his son were active in the Durham tobacco business into the 1890s - it's possible that they had a more elaborate dwelling out this far at that time as well. All speculation - hopefully someone else can dig up some interesting information.

Wow... what an unholy union of architectural styles. Like the front end of an Oldsmobile stuck onto the rear of a Tin Lizzie. Words fail.

The windows say 19th century, the roof says 1920's. Perhaps a fire necessitated the repairs? The blue stained glass is atypically oversized against the window-but in an interesting, pleasing context. I bet it is awesome inside. The windows surrounding the door are nothing like the window glass and the whole package could be transplanted from various sources. However, the Italianate windows along the side seem original. A pretty cool package overall.

If you look closely at the windows on the left side of the house, the back 2 windows appear to have mullions on the windows. The other three have none.
If they are newer rebuilds they might have the fake grids that can be removed.
Id have to get a closer look at them.....
If they were original, wouldnt they likely all be the same?

Without a close examination,I suspect those Italianate windows are original and are all from the same (but a different house) source. Goes back to earlier comment that the glass was replaced during repair/remodel. There is not a random placement of glass in the windows - all are the same in individual rooms.

This house goes up for Tax Auction on Tuesday Sept 13th, 2011