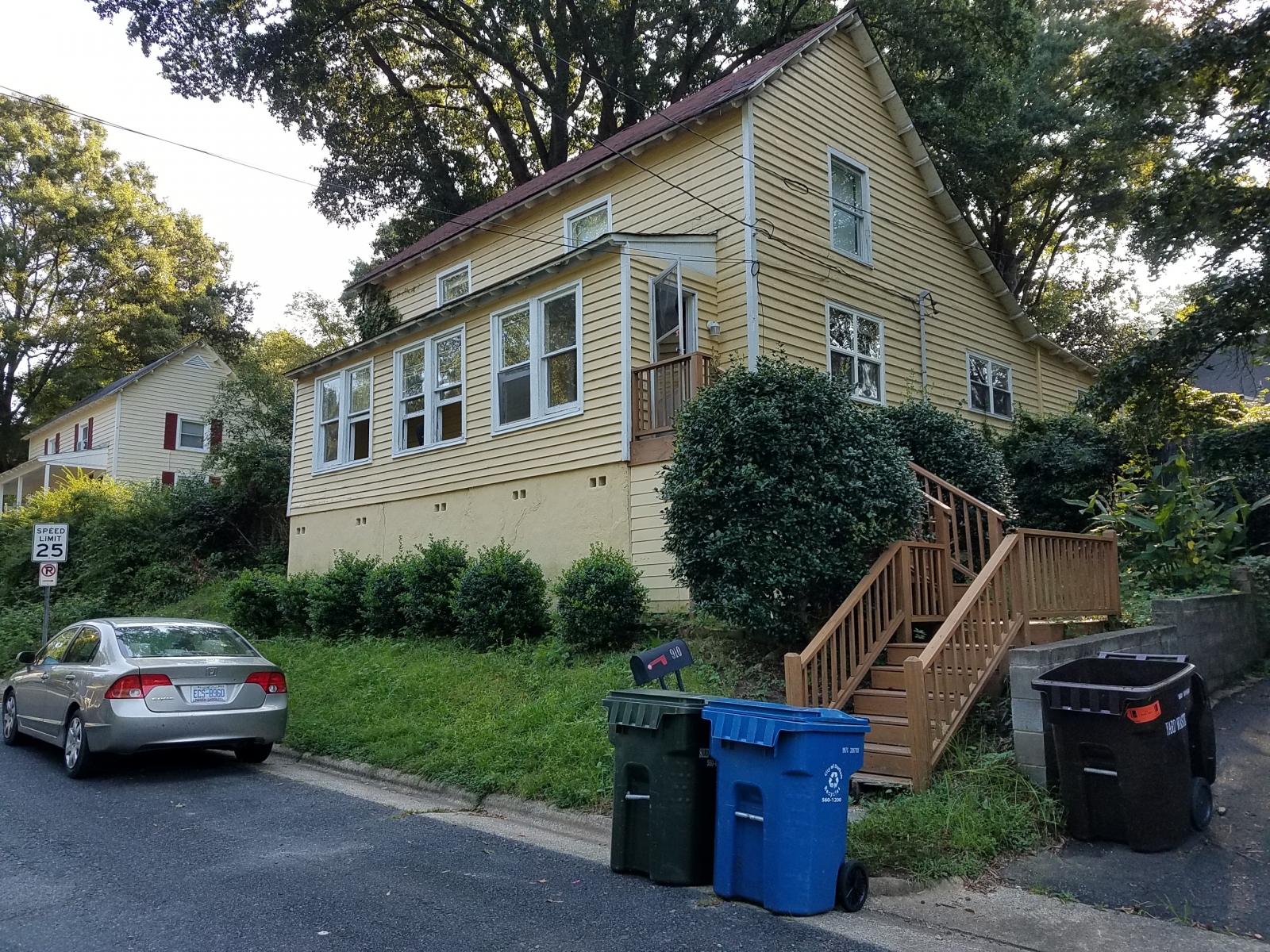 910 Orient is one of several remaining early 20th-century two-story houses built by the nearby Pearl Cotton Mills for its workers.  The exact date of construction is difficult to determine, as city directories from the turn of the century describe residences in the area as "near" the factory or simply "Pearl Mills" with a house number.

The first listed resident of what was - like all the earliest two-story houses along Orient and Washington Streets - initially a duplex appears in the 1905-1906 directory as Leander Winston, a laborer.  As can be seen from the 1913 Sanborn Fire Insurance map - the first to include the housing around Pearl Mill - this was then the 800 block.

(Fragment of 1913 Sanborn Fire Insurance map, available online via UNC Libraries. 910 Orient - then 810 Orient - is shown as the second house above Trinity on the east side of the street.  Note the close proximity of the Beltline railroad and the virtually identical shape of the structures, built according to a uniform plan.)

Understandable for worker housing with Pearl Mill employees either moving on to other jobs or seeking more comfortable confines for their families, the turnover in tenants was constant.  Still, the close proximity to a shared workplace and the limited development of surrounding North Durham neighborhoods made this a rather contained community.  Even Orient Street itself was owned by the company until it was transferred to the city in March 1924. 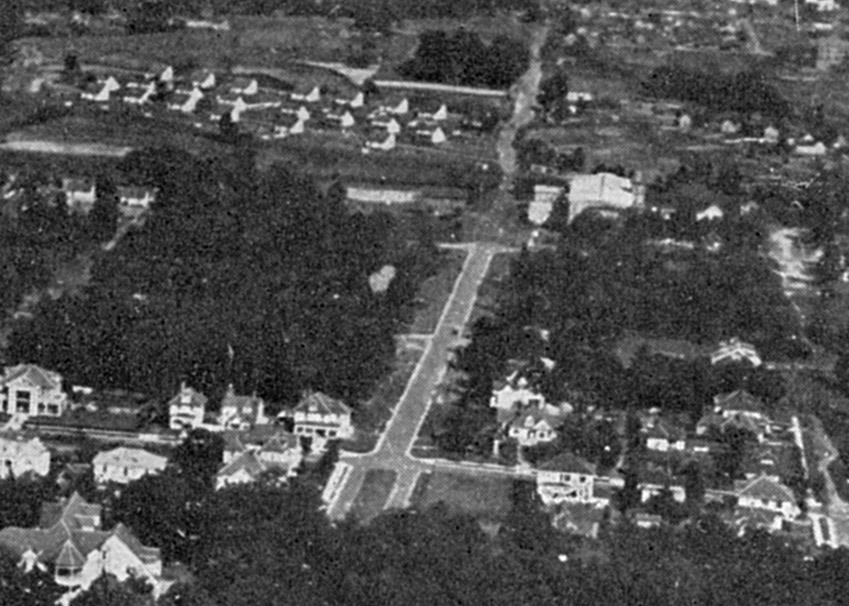 (Looking east with Pearl Mill Village - including 910 Orient second from right facing the camera - near top left, 1924.  Note the virtual absence of what is now Old North Durham in the distance and the contrast to more ornate structures like the Salmon House on Watts Street in the foreground.  Courtesy of John Schelp.)

Controlled by the same owners as West Durham's Erwin Mills since the end of the 19th century, Pearl Cotton Mills was formally bought out in 1932 and incorporated as the larger company's Mill No.6.  All of its worker housing, including 910 Orient, changed hands at this time.

Around 1940, a textile worker named Robert L. Nance and his wife Betty are listed in one half of the 910 Orient Street duplex.  The Nance family would stay on in the house, purchasing it in the summer of 1945 when Erwin Cotton Mills offloaded hundreds of its company houses across Durham en masse. 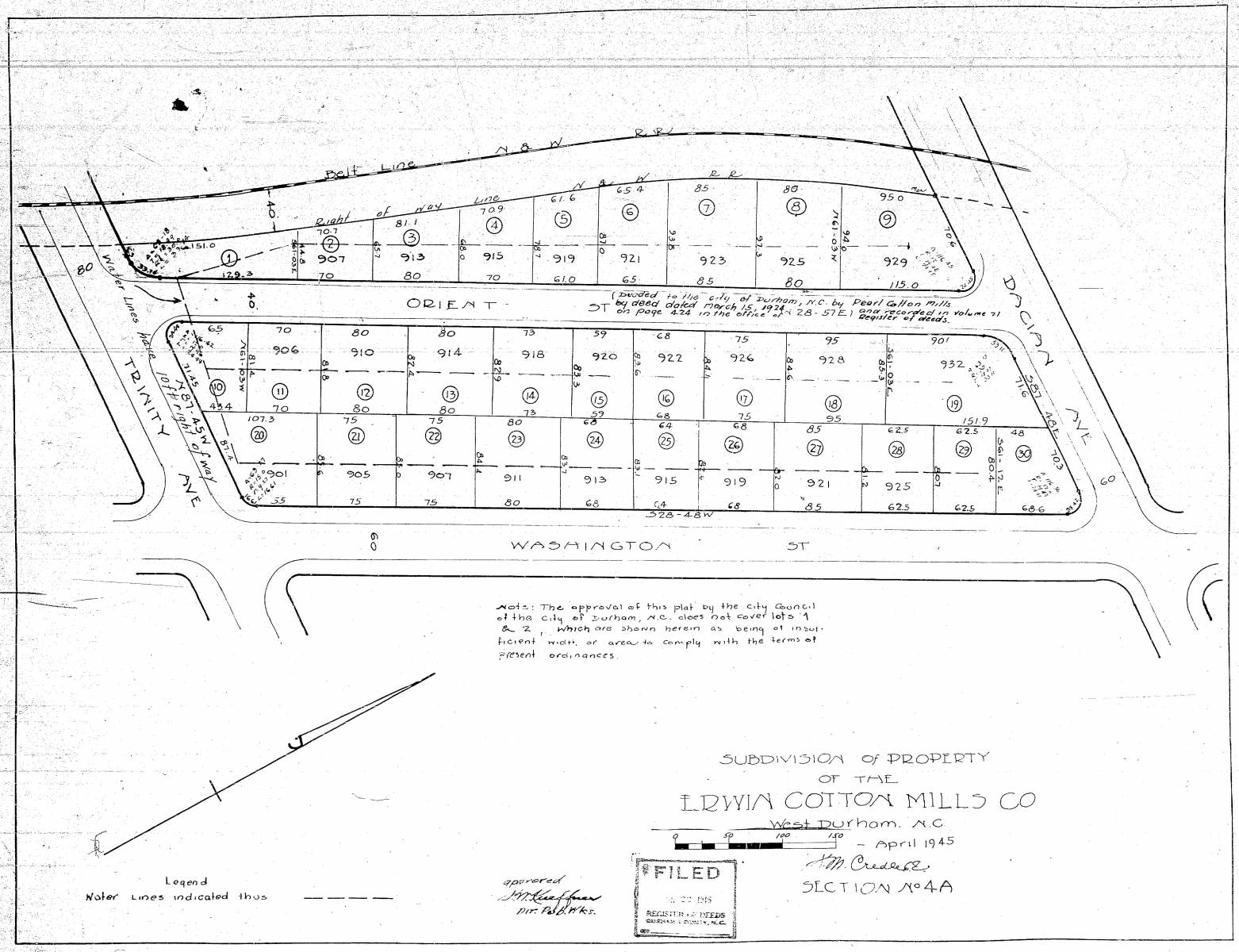 (One of over a dozen subdivision maps submitted to the County Register of Deeds by Erwin Cotton Mills Company in 1945 as it prepared to sell off its worker housing.  Sources differ as to whether this move was related to strikes that year.  Section 4A is the eastern portion of the former Pearl Mill Village, with 910 Orient Street shown as Plot 12.)

Interviews cited in the 1984 National Register Historic District filing for Pearl Mill Village reflect lingering bitterness about how this part of the paternalistic tie between factory and workers was abruptly cut, with many in the neighborhood unable to afford the price of purchase and subjected to higher rent by unfamiliar investors.

If that was a rule, the Nances at 910 Orient Street appear to have been an exception.  Perhaps a sign of relative prosperity, second tenants ceased to be listed in directories in the postwar years, and the duplex was converted to a single home.  Unburdened by the earlier link to a single employer-landlord, Robert Nance took other work at Liggett & Myers.  He also became a preacher, and by 1962 was listed in the city directory as Rev. Nance, pastor of the Markham Avenue Baptist Church just a few blocks up Washington Street.  Robert and Betty Nance both passed in the early 1970s, but the house remained in their family for nearly another decade.

Since 1982 the home has belonged to Louise Noel and her family.  They have made significant alterations, including a rear addition and the enclosure of the front porch in the 1980s, as well as some interior renovations in subsequent years.  Like much of the former mill village, 910 Orient has again become a rental property for an extended period, with tenants in recent years including Duke University graduate students and employees.

After more than a century of use and in spite of significant redevelopment pressure in this central location, 910 Orient still stands as a valuable part of this remarkably intact historic neighborhood, showcasing the lasting imprint of long-defunct industry on the landscape of Durham.