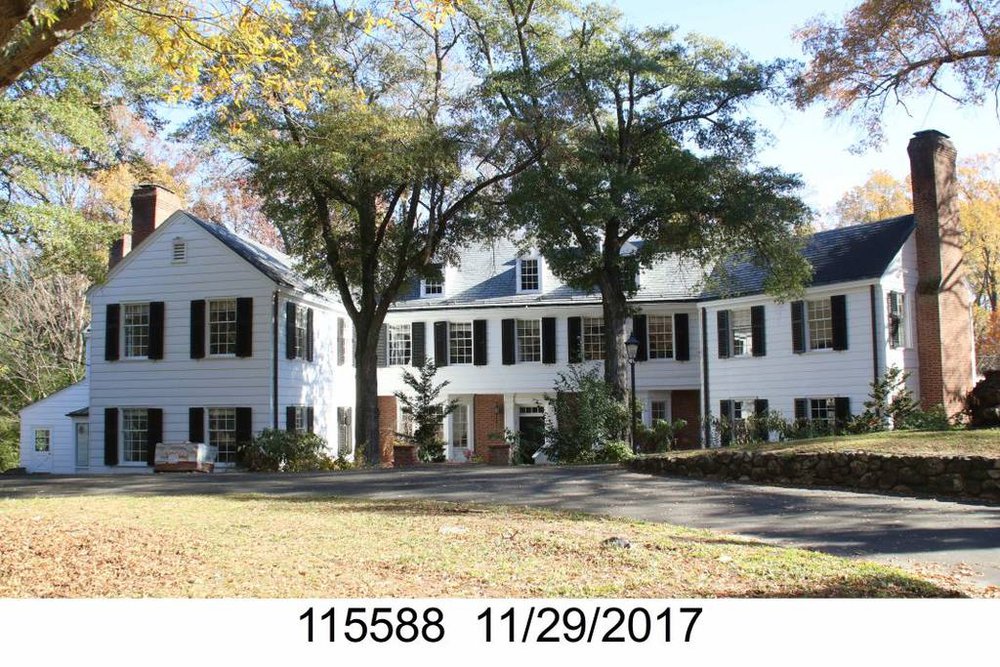 By the late 1930s, John Adams Buchanan had risen to the pinnacle of Durham's business, civic and social worlds. He had organized the company which built and operated the Washington Duke Hotel, he founded the Home Building and Loan Association and his Home Insurance Agency was the largest insurance company in the area. He selected a four acre site in Forest Hills and consulted Durham's foremost architect, George Watts Carr, to build a home that would suitably express his station in life.

Buchanan wanted a large, stylish home with elegant areas for entertaining, modern conveniences and comfortable living spaces; he got a 11,210 square feet colonial revival mansion. The exterior decoration of the house is rich in high-relief classical elements. Note the medallions and triglyphs at the cornice and the exaggerated broken ogee pediment surmounting the main entryway on the east front.

The entrance hall can only be described as grand-the sweeping, hanging stair has no rival in the area. Note Carr's unusual use of the classical meander decoration, oversized to complement the scale of the stair and increase the drama of the space. The first floor of the house is laid out on two levels along the length of the house. The formal living and dining areas are all arranged on the lower, east side of the house. Observe the high ceilings and heavy moldings incorporating dentils and egg-and-dart and rope designs. The fireplaces display neoclassical and Adam elements.

On the west side, two steps up from its eastern counterpart, along a broad, well-lit gallery, are arranged the less formal, but no less richly appointed, family living spaces. The large library is clad with raised panels of clear redwood, now stained dark. The heavy dentils in the cornice and the black marble fireplace surround add to the dignity of the room. The large, informal 'playroom', as the Buchanan's called it, is decorated with massive box beams.

John Buchanan was responsible for two other extant Durham landmarks. As treasurer of First Baptist Church downtown, he was instrumental in building this great temple which has anchored the end of Chapel Hill Street for more than 75 years. He also built the Art Moderne style Bus Terminal at 411 East Main Street-the last such structure still standing in any major North Carolina city. The Buchanan family occupied their Cedar Street home until 1960. Four of their five daughters were married there. It has been occupied by a series of owners the most recent of whom have taken a loving interest in its preservation as a Durham landmark.

Interiors for the 1980 movie "The Handmaid's Tale" were filmed at this house.

Michael and Kathleen Peterson bought the home in 1992.

Peterson made a bit of name for himself by writing a few war-related books, followed by a regular newspaper column for the Herald (which I admit I enjoyed.) At the peak of that voice-of-the-concerned-citizen-of-Durham public recognition, Peterson mounted a campaign for mayor. That too garnered a good bit of attention, but Peterson lost rather handily and slipped out of the public eye for awhile.

If you don't know how that story unfolded, you should do some more Googling. Peterson's wife ended up dead at the bottom of the back staircase (not the one described above.) He insisted he was innocent. A jury disagreed. He retained some ardent (kooky) supporters who promulgated various wild theories - like Kathleen Peterson being attacked by an owl.

Since I have a habit of perusing property listings online, I noticed that 1810 Cedar St. in Forest Hills is on the market. That would be the site of the Peterson murder back in December of 2001, Durham's last media frenzy prior to the Duke Lacrosse case.

I'm intrigued because I knew that Michael Peterson had sold the house in the aftermath of the trial as a part of liquidating assets, etc., and I looked up the sale price around that time - out of curiosity as to how much a house with that degree of recent infamy would sell for. The answer? $640,000 - low for this immense house (9260 sf, 3.4 acres), which would mean that a resonably famous murder does not raise your property value.

The house was bought by the Balius family, who own part of Mad Hatter, back in 2004. The price now? $2.1 million. We'll see what the statute of limitations is for sensationalistic murder lowering property value. Beware of unhinged owls.

The property sold in July 2008 for $1.3M to Biond Fury - a psychic - from NYC, despite his prescience, stated that he somehow missed the massive media coverage of this house:

"Fury ... said he was unaware of the house's history and had never heard of the Peterson case. He said he has ties to the Triangle after attending graduate school at Duke University and the University of North Carolina-Chapel Hill, and he was attracted to the house because of its architecture and layout."